A mod made by a few people who have been playing Victoria 2 for almost 10 years. Download it if you're tired of iron shortages in the 1870's, of incompetent ai's which constantly rebel spiral, of France being absolutely useless as a nation, of railroading, of bloat, of countries never increasing their starting literacy, of the game running extremely slowly and of Russia never modernizing.

The mod includes: an extra tech row, an improved crimean war, bourgeois dictatorship being an actually viable government form, decisions to dynamically enslave unaccepted cultures (no matter what culture they are) and to restart the trans-atlantic slave trade, much better ai, genocide which actually works and let's you pick what cultures you want to kill, a special decision to genocide turks if you're a christian balkan country, good economy, the ability to create a new union culture as Scandinavia, less event spam, an uncivilized china that is a bit stronger, intra-european migration if the pops are of the country's primary culture, games often having different but plausible results, an alternative German Confederation formed by Austria and more.

The biggest fault of every Victoria 2 single player campaign has always been the irredeemably stupid AI. We've taken this as the main objective of our modification: delivering an AI that builds a large army, does not neglect their navy, and eventually raises their literacy to very high levels.

Despite the constraints of not letting the AI cheat more than it already did, of the hardcoded parts and of still maintaining relatively historically accurate results (for example, not letting the AI research the education techs too fast to prevent 40% literacy Russia in 1890), the results are surprisingly good.

(Right click the images and open in a new tab to visualize, or just click them and then return to the page afterwards) 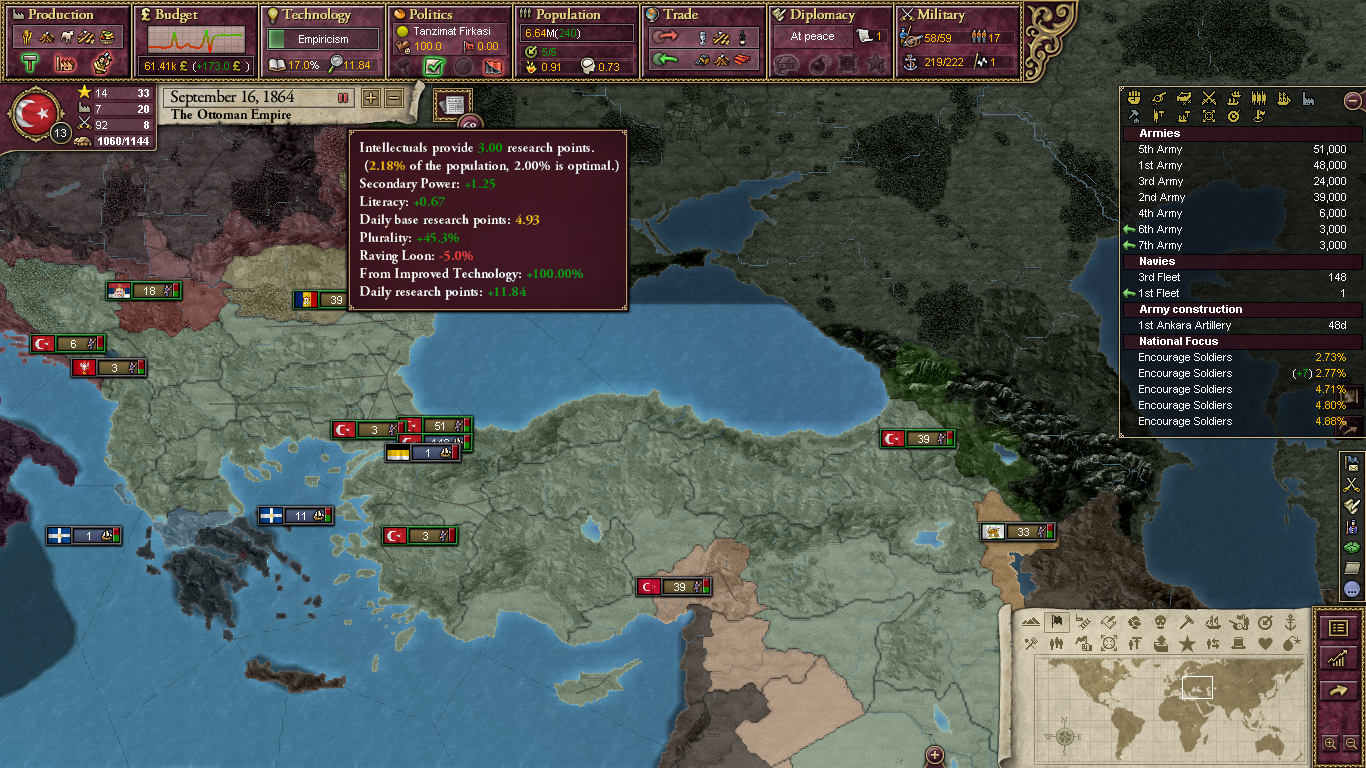 Here are the AI Turks in a 1864 game. France intervened in the Oriental Crisis and stopped them from retaking anything from Egypt. However, the AI till managed to raise a decent army, a very large albeit outdated fleet (consisting of almost 150 ships) and even industrialized a bit. 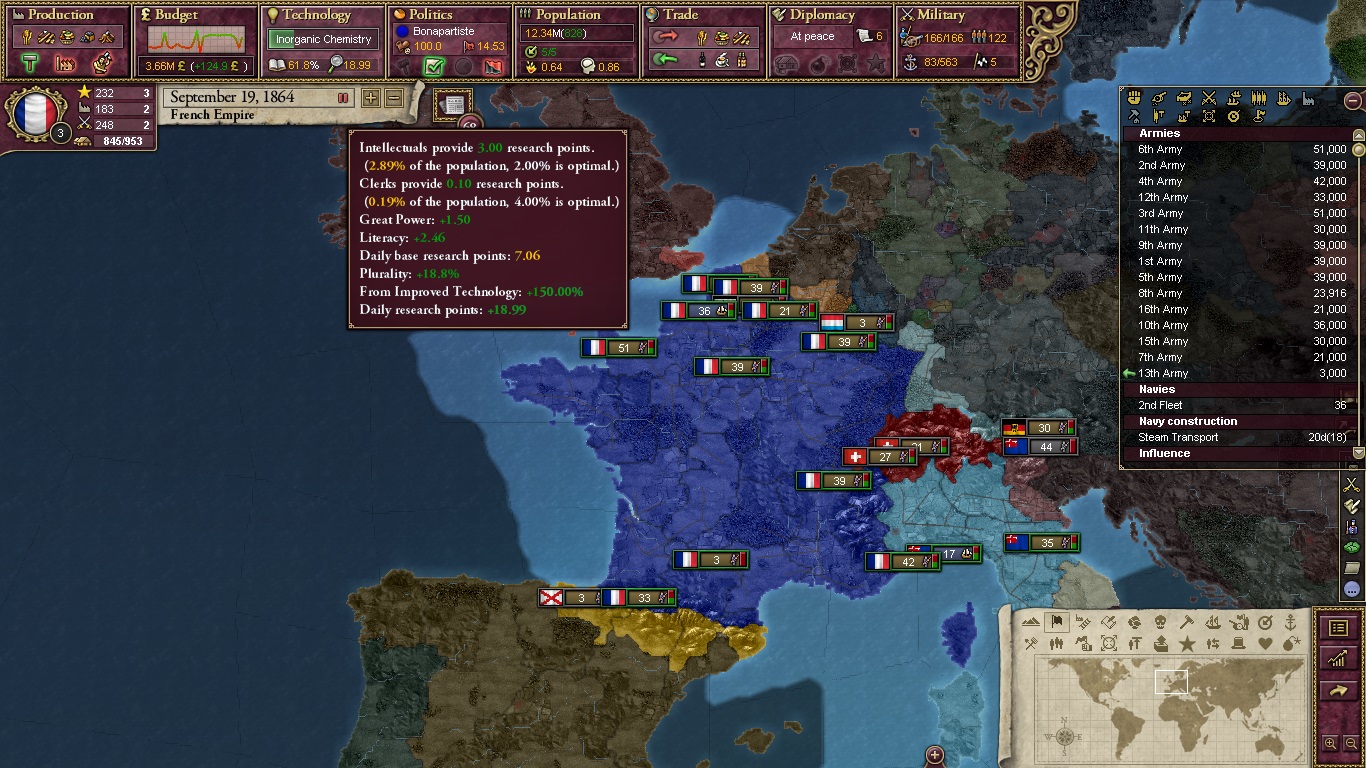 Here is an AI France in a game where the SGF is a player. As you can see, their standing army is very large, and they are raising their literacy at a decent rate. By 1890, France normally has around 90% literacy in almost every game. 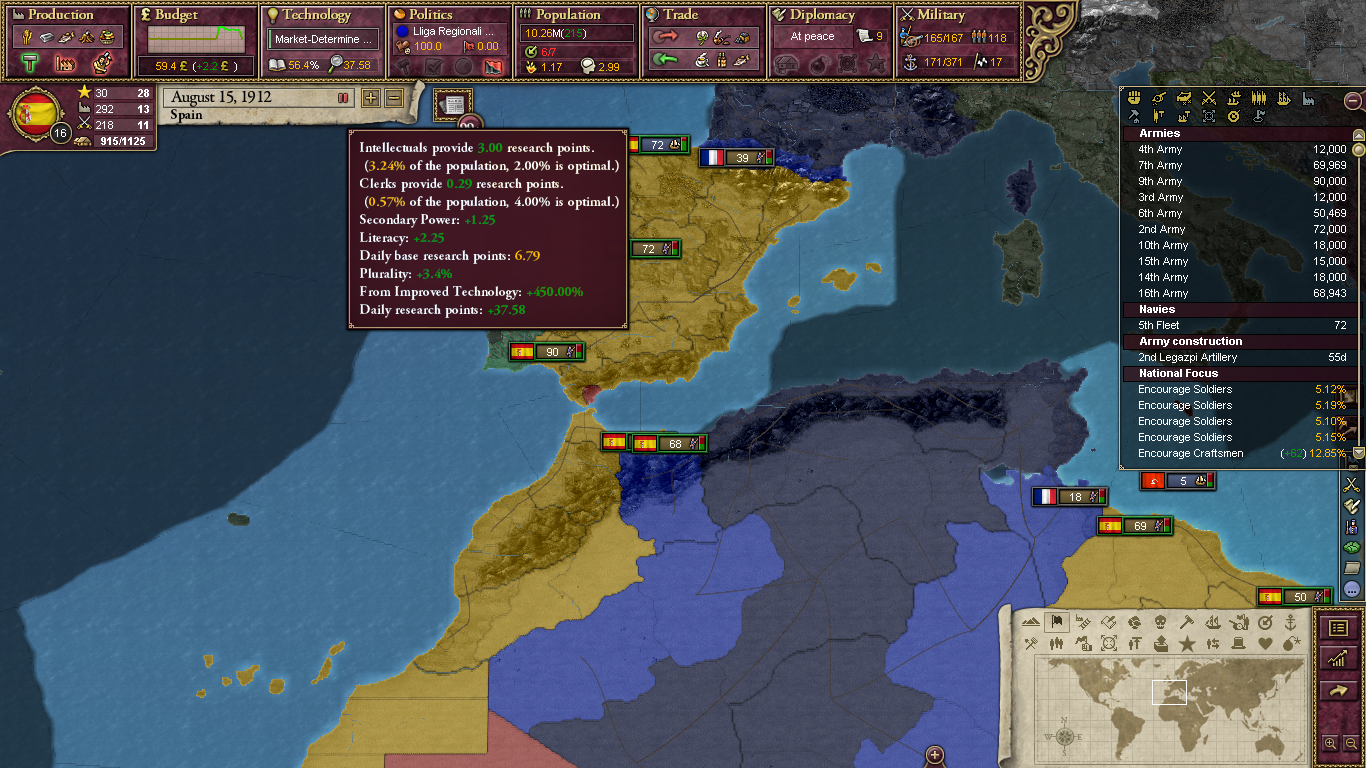 The Spanish AI in 1912. As you can see, they have a large army, a large navy, managed to industrialize a bit, raised their literacy to 50% and are now a decent SP. They do not rebel spiral as is often seen in other mods. Sadly, they've elected a Laissez Faire conservative party which has limited their economy quite a bit. 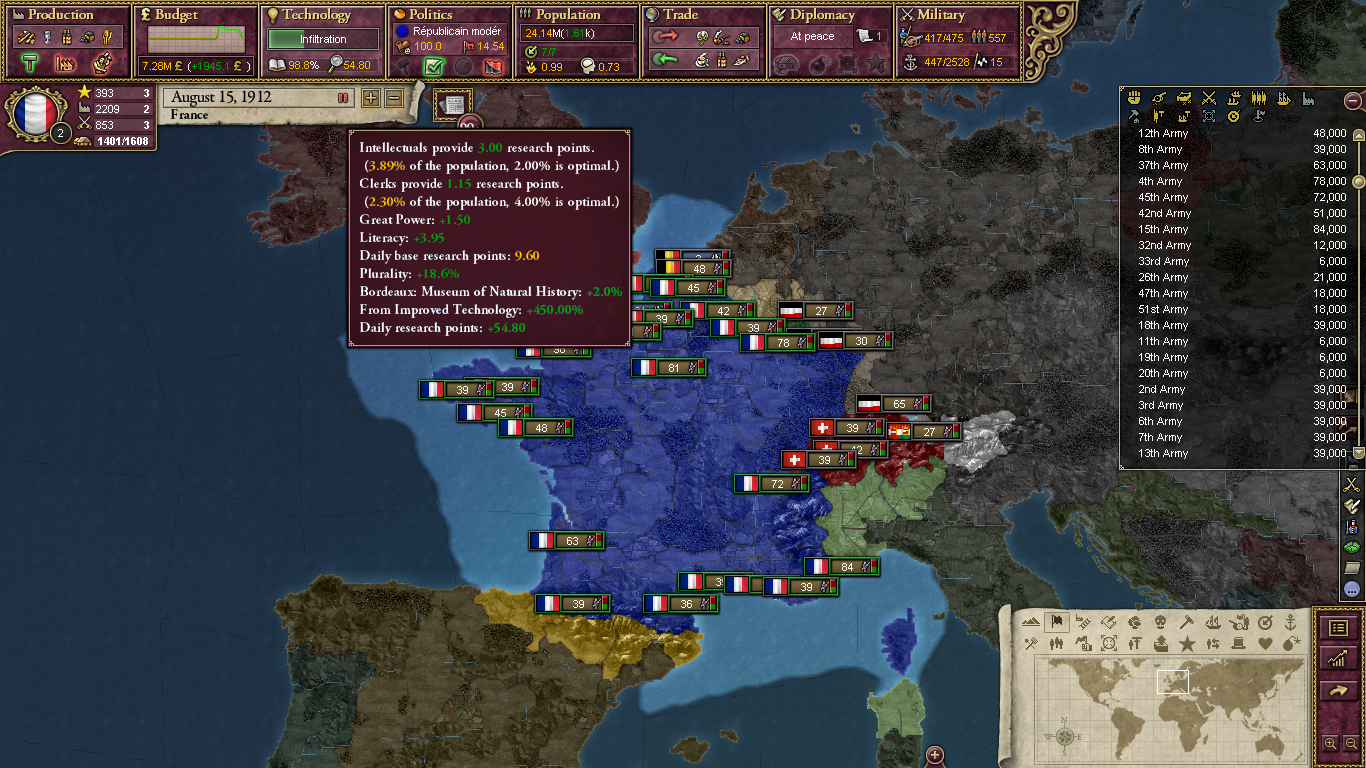 Other than the AI changes, we've also added a good amount of flavour for many areas of the game on top of the very large amount of flavour that Blood & Iron (the mod we based Crimeamod upon) already had, reworked reforms, added new CB's (such as install monarchy), made bourgeois dictatorship actually viable, state reworks in a lot of places, and also streamlined a lot of things.

The final objective of our mod is to provide the best possible Single Player experience while avoiding any railroading.

This patch fixes some issues that were happening far too often with the previous versions, such as the oregon war escalating, US annexing all of mexico...

Quite a few ai improvements. They should do better early game now, and should also focus a bit more on military techs. Scandinavia, when formed by anyone...

NOT SAVEGAME COMPATBLE. A lot of bloat was removed, especially in Africa. New events and decisions were added for Japan, there were state changes in Germany...

Includes a hotfix. This small patch changes the integration policy a bit. It now transforms ALL craftsmen and clerks of the selected non-accepted cultures...

This version includes a reworked ''integration project'' to help you assimilate minorities by force with a bit more flavour (you can now pick what cultures...

The main change of this version is the fact that all soldiers are now on the capital of the state. There are many reasons for this, but the main one is...

When to expect any update?

if you want to try it out, here is a beta patch. apply over lastest crimeamod. Moddb update should be when i bother to make an icon for the new tribal pop...
They were added for various reasons, but one of the main ones is to help the economy not suffer as big of an impact in 1880 when suddenly hordes of african miners and farmers cause everyone in europe and the americas to become unemployed, and to make colonial blobbing less profitable.

Hear me out , I see the CSA has a dixie assimilation event if they win the war, what if in the month of peace prior to the war they get said event so if the war drags on for 1 year or more you would have a **** ton of Dixies even if they loose. of course it should be limited (timewise) just an idea.

I see what you're saying but cores prevent assimilation

Ok thanks :(, so best bet is to lose the war and then reinvade them a few years later?

If you manage to keep the US conservative/reactionary enough, you can have dixie as primary culture and yankee as secondary when the alternate civil war fires, with the north seceding. A good way to do this is also to claim Columbia and let the anglos keep it, since the revanchism will help.
In theory the opposite will happen, but in practice i've never seen any yankee province in the east flip to dixie, i think because they are way too populous and the homestead act drives immigrants west.

Playing a USA standard game, noticing that none of my states are going above 6/8 factories in late 1860s, is this to allow late game factories to spawn for AI?

Yes, capitalists normally leave 2 slots open, in other mods and in vanilla the value is normally 1
So if they build a factory and it closes, and it is occuppying the 7th slot or 8th slot, they often just delete it.

Played as Liberia to try the content mentioned in the last update and got cucked by no civil war (Looks like they got rid of it peacefully, mexican-american war dragged on a long time), so no resettlement events.

But for time spent plodding around as a minor it was pretty good. 8/10 would accept all of Africa again.

That's just how the game works... The one time you decide to play as Greece, Russia decides to take Tsargrad