This modification for Sins of a Solar Empire: Rebellion has been created during the old times of Vanilla Sins to make the game funnier, more interesting and good looking. A lot of balance changes, unique concepts for the factions and beautiful new music should make the game feel more enjoyable!

Why you should check it out:

If you'd like to communicate with the devs, other players, chat about the game or just to get more detailed updates about our progress, join our Discord server! We prefer using this server, as it allows us to communicate easier with you. Join for more information and the ability for feedback, feature requests, sneak peeks and other things:

It has been a long time since there was an update on our mod, but finally we are about to release the newest version with a long list of exciting changes. It adds new game mechanics to the game and has the goal to refresh both our mod, the base game and the Vasari factions as individual parts of the game. You can find a more detailed ChangeLog on our Crazy Discord server.

We are going to talk about some of the most interesting abilities, how they completely change the game and how they look like. In the end of this article, there is a small Sneak Peek for the upcoming planned updates.

So what did we do all the time?

The Vasari were always a unique faction to play and were the hardest to learn. Everyone in our team always liked playing them, but neither the concepts of the Vanilla game nor the modified concepts in our previous versions of "Crazy" seemed to fit. According to the original lore descriptions, their numbers were low and much of their population was on the few giant ships they still own. Even when the TEC managed to build a defensive force, the Vasari had a good chance in battle because the few ships they had were superior in technology.
Of course this was a balancing issue. The Vasari are supposed to have capital ships that are as strong as four equivalent ships of the TEC and Advent. Obviously this causes balancing difficulties during the early game. Long testing sessions led to the results you will be able to try out very soon. 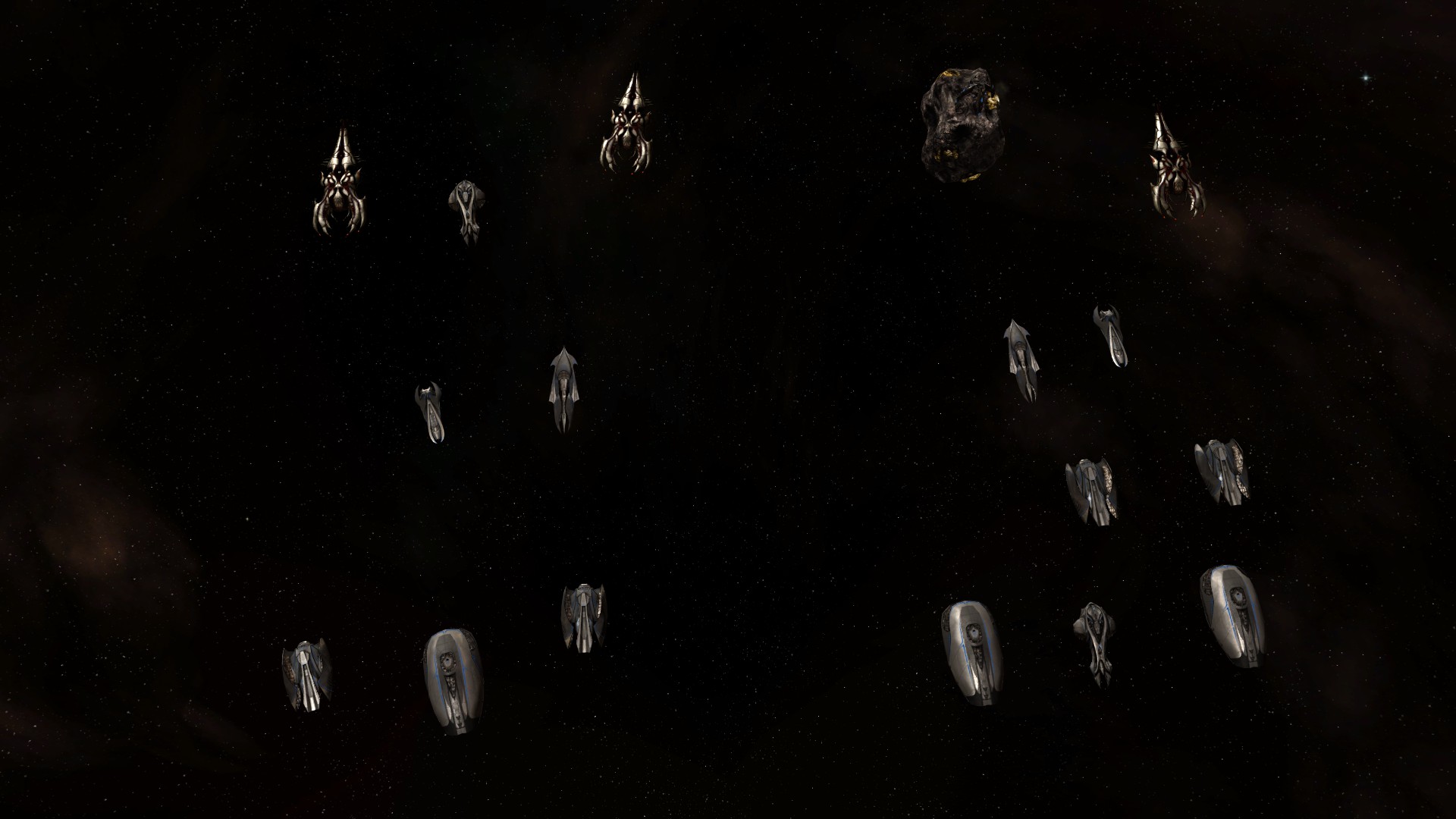 Demonstration of a couple results (GIFs)

With the Charged Missiles the ability, the Rebel Vulkoras can target everything within the whole orbit, but is vulnerable to attacks and loses phase missile shield penetration.

The Loyalist Kortul can heal itself with pulse beams and create chain-traveling pulse beams which hit multiple targets for additional damage. "Volatile Nanites" is much deadlier than before.

The Loyalist Jarrasul has a weaker version of "The Maw", utilizing it original ultimate as something more fitting (the old ultimate was basically a bombing ability). The converted resources are useful for a ship that carries a huge part of the Vasari population.

The Kultorask just annihilates everything within its relatively short range when it uses all of its abilities in combination. "Dissever" causes a deadly chain reaction of explosions on ships affected with Nano Leech.

Demonstration of a couple results (Pics) 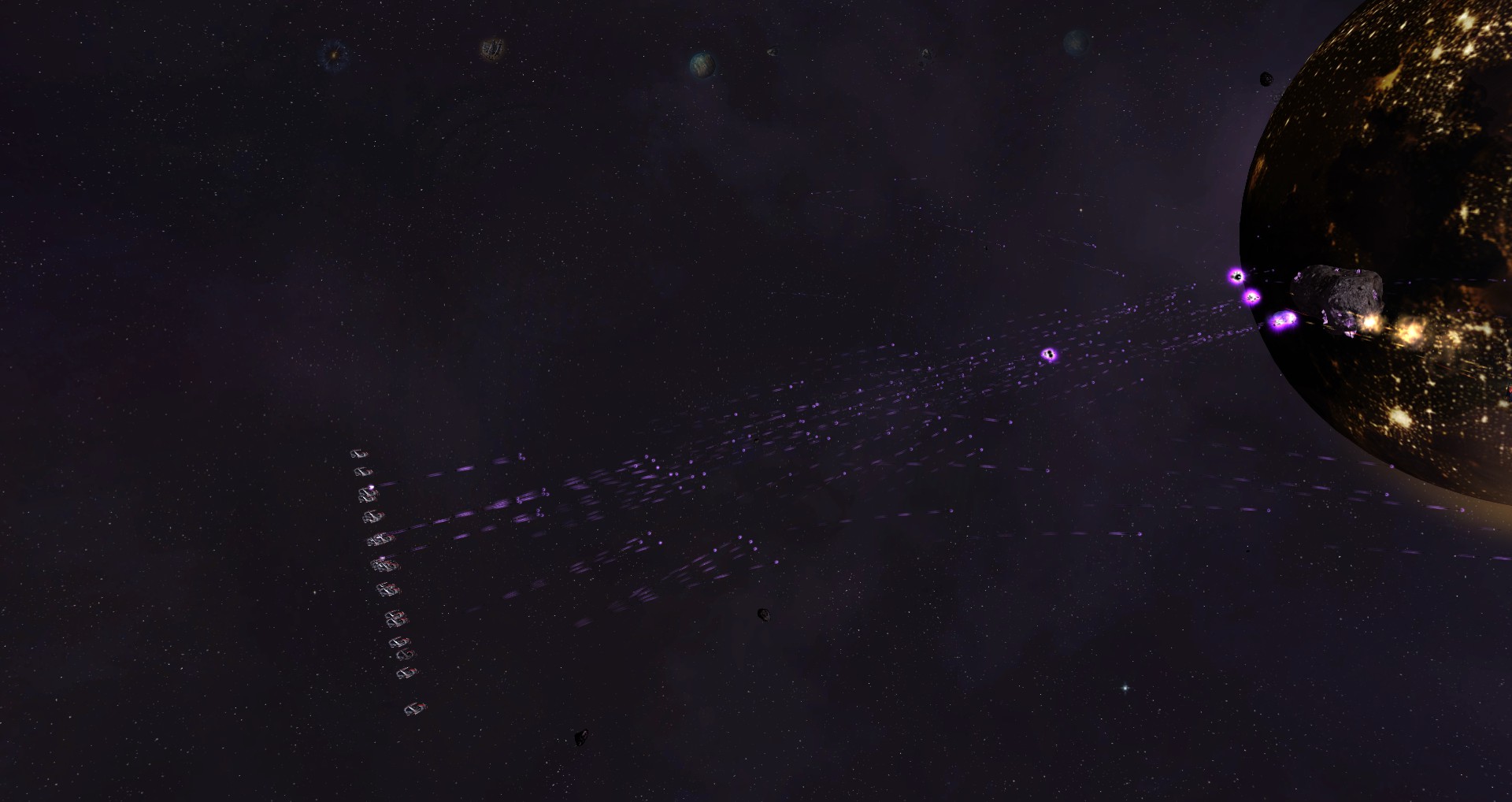 The Rebel Kanrak Assailants are, unlike the Loyalist equivalent, multi-target long range frigates 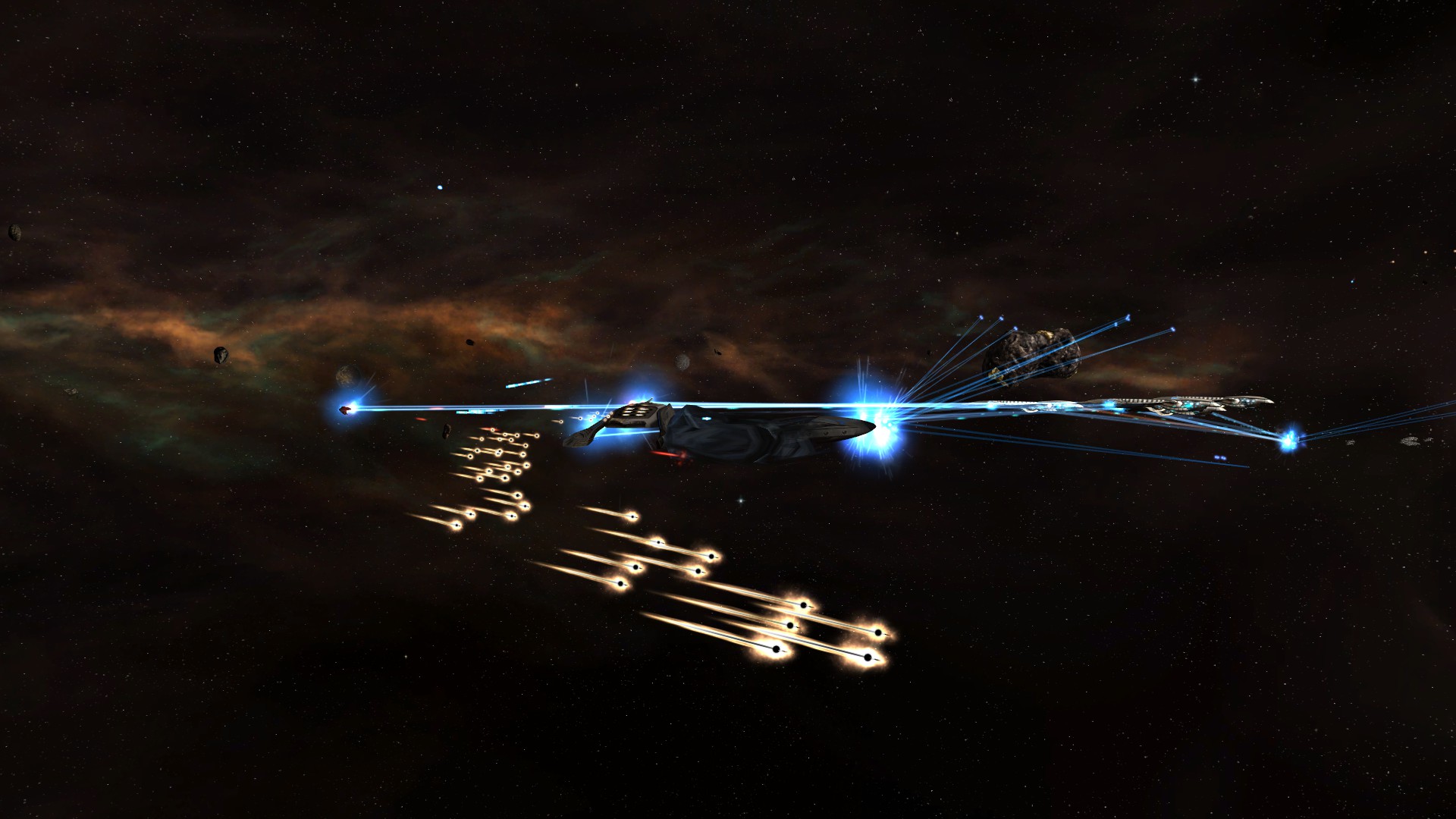 The Rebel Skirantra may spawn a specialized Phase Missile Platforms that can hit multiple enemy fighters at once with swift Phase Missiles. 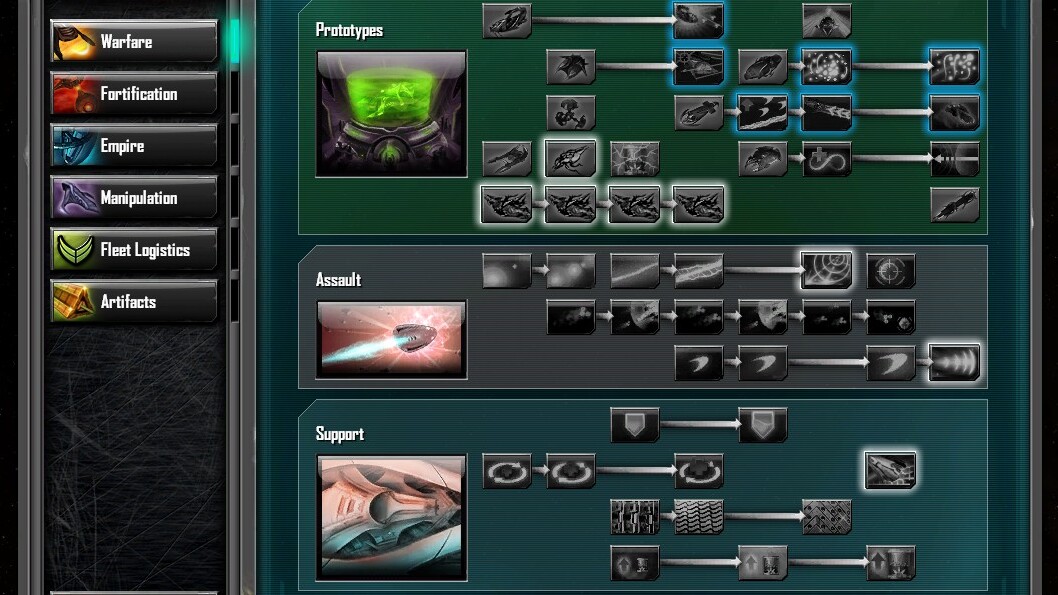 All of this is only a tiny bit of what we have changed. We hope you will give it a try and enjoy the new effects, features and mechanics. Some more examples of unique abilities:

Out of multiple updates, we can reveal two aspects of the game we are going to change in the crazy manner you are used to! Every update is going to change a major aspect of the game, which makes focusing and organizing the work easier.

Have fun with our update!

Detailed information about the new update, its changes and the future!

I tell you of the work of the last 4 month and the planned features!

I'll tell you informations about the update! Read and comment it! :)

I'm telling you about the newest update for Crazy!

PLEASE READ DESCRIPTION: Hey, this is a light patch for "Crazy 3.0 (Rebellion 1.95) FULL". A fix for a CRASH and several bug and balancing fixes are included...

PLEASE READ DESCRIPTION: Finally we can present you the newest, fresh version of our Crazy Mod, fully compatible with the latest patch of Rebellion. Join...

A happy new year guys! As promised like 2 months ago (oops...) I got the new version for you. I did some balance changes and many bugfixes, which took...

Hey, after so many patches in a row I have updated "Crazy" for the newest Patch of Rebellion, v1.85. Fully compatible with all DLC's, although I did not...

Finally I can present you the comeback of "Crazy". This full version contains major changes. NOTE: The file has been replaced. To get the hotfix, you...

This is the Galaxy Forge Tool for my mod "Crazy" v2.988 . Enjoy it and create new maps!

I have your mod and been playing it or learning it. I see the differences made in the research and ships. I like that even though the upgrades cost against my fleet account allotments. I was playing a team game with five other teams. We were down to the last two teams. I can only assume the pirates got them. My teammate had a small bounty 712 credits against him. When the pirates launched their attack, they came with 2 titans, 8 kols, 2 corsevs and 2 marzas. They also had about 50 corairs, 30 flaks, and 20 of the ships that for the pirates. I forget their names. They were attacking his Capital with this fleet. He had a fully upgraded star base, full allotments of hangars and defense platforms. Along with a full gravity well mines. The pirates blew these defenses very quickly and we lost the game because they blew mine and his fleet. He was a TEC loyalist and I was a Vasari Loyalist. My fleet had the full allotment of level 10 capital ships and a level 10 titan. They cut through that like a hot knife through butter. Is this the way you wrote the mod for the pirates or is this bug?

yeah well, the pirate issue is quite known, but pirates reach that level of strength very late in the game, when sacrificing a planet usually would not hurt that much.
main issue is not the ships, but the research pirates have. The damage bonuses are quite insane, and we played with them quite often.
The pirate ships on their own are always level 1, no matter the pirate raid strength. We hoped to change that at some points, but our previous attempts to make pirates hard, but still fair to play against, failed.

We'll probably nerf them and then look at them later again.

I dont know why, but I download the mod but it doesnt give me any files, just a doc that cant open

Great mod but the Vasari rebel Titan and Advent rebel titan are unkillable once they reach level ten the vasari titan can heal up to 3000 points per second and they can both solo 15 kol battleships and 2k worth of kodiaks and still win.

it perhaps seems like you don't use the correct strategies. While Titans with such a high level are indeed hard to kill (which is intended), every titan has its own counterplay. The Kultorask (Vasari Rebel Titan) is unkillable against spam fleets. However, if you try attacking it with few single target ships, ideally something tanky in the front and something with long range damage that stays out of the titan's range, it is pretty much possible. It is worth investing in the correct ship classes. Perhaps the 15 Kol Battleships would have been better without the Kodiaks. Additionally I want to note that if you use the patch, the Kultorask is back to vanilla healing values, hence weaker against few strong ships.
The Eradica (Advent Rebel) Titan can be overwhelmed by any force, however I wouldn't attack it without a titan. Ideally you have a strong bomber strike craft force (also works against any other titan) to burst it down. Once it is dead and the ultimate ability is triggered, you need to retreat until the 60 seconds are over and the titan is being destroyed.

I hope that helps you :)

This mod was totally ruined. Pirates have become overpowering and you also get the totally brilliant idea to reduce the limit of capital ships :(

hey, sorry for replying so late, I read your comment earlier.
If you have an issue with Pirates, turn them off. They are supposed to be a serious threat, however we intend to weaken them early and strenghten their late.
If you complain about the capital ship limit, then you didn't read the patch notes. This change only applies for the Vasari, and for a good reason. Their capital ships are much stronger than their oppenents' in mid and late game.

this is not CRAZY, this is MADNESS ... a perfect mod if you want to unlock all the achievements , FAST . Pirates are nasty and in mid-end game everyone use them in excess ... the result : LAG :D

Hey, I hope this means something good :D

If you are still interested, I'd be happy to welcome you on our Discord linked everywhere on this page.

The lag is not that unusual for this game, however I'd recommend to not play against too many Advent AIs.

Sins of New Eden Sins of a Solar Empire: Rebellion