Ages of the Federation is a new series of total conversions to Sins Of A Solar Empire: Rebellion. The first mod in the series takes place between the Enterprise and Original series eras, focusing on the conflict between the early Federation and Klingon Empire. A resurgent Romulan Star Empire, angry and still licking its wounds after their defeat to Earth and her allies waits in the shadows, ready to take advantage of any misstep by either the warring powers.

Gameplay of the Ages of the Federation of the Stellar Parallax

Well, it's only March and the world has somehow managed to plunge itself into chaos once more. Viruses, wars and impending global economic catastrophes! Oh my!

And yet Stellar Parallax remains - a bedrock of (comparative) sanity in a world gone mad - and the work on our projects continues, particularly Ages of the Federation.

Many of you will have seen on our Discord much of the outstanding 3D and 2D artwork being produced by our wonderful artists - Max, Hobbs, Conner and others. We're actually celebrating passing a number of milestones as the list of art assets for various factions and minor factions become ever more complete.

Yet a major and ultimately all-important aspect of the mod that is more difficult to present visually is gameplay. After all, what's the point of a mod or game looking pretty if playing it is about as much fun as a case of gastroenteritis? As many of you will know Hobbs is trying to set some time aside to make a semi-regular (time permitting) video series showing off the progress of the mod, which will actually allow you to witness the changes and improvements the team has made to how the mod actually plays.

Now when it comes to Stellar Parallax, the Big Cheese when it comes to designing and implementing gameplay changes is Echo. This New Zealish adonis prefers to work behind the scenes, elbow deep in the guts of the mod, and few things bring him greater pleasure than purging the game's code of extraneous material. It's kind of his thing, if you know what I mean.

Unfortunately, Echo working in the background so much often means that he ends up being something of an unsung hero, which just isn't right given the sheer amount of work he puts in. To that end, I've asked Echo to be the star of today's dev update, and to bring you up to speed on what he's cooking up.

Take it away, Echo.

When we set out to revamp AotF1, we decided that not only did the art need updating to a new standard, but that gameplay, and especially combat, needed an overhaul as well.

While previously our combat gameplay has looked very pretty, it didn’t really distinguish itself as being STAR TREK combat from a mechanical sense, and so with the revamp I set out to fix this. 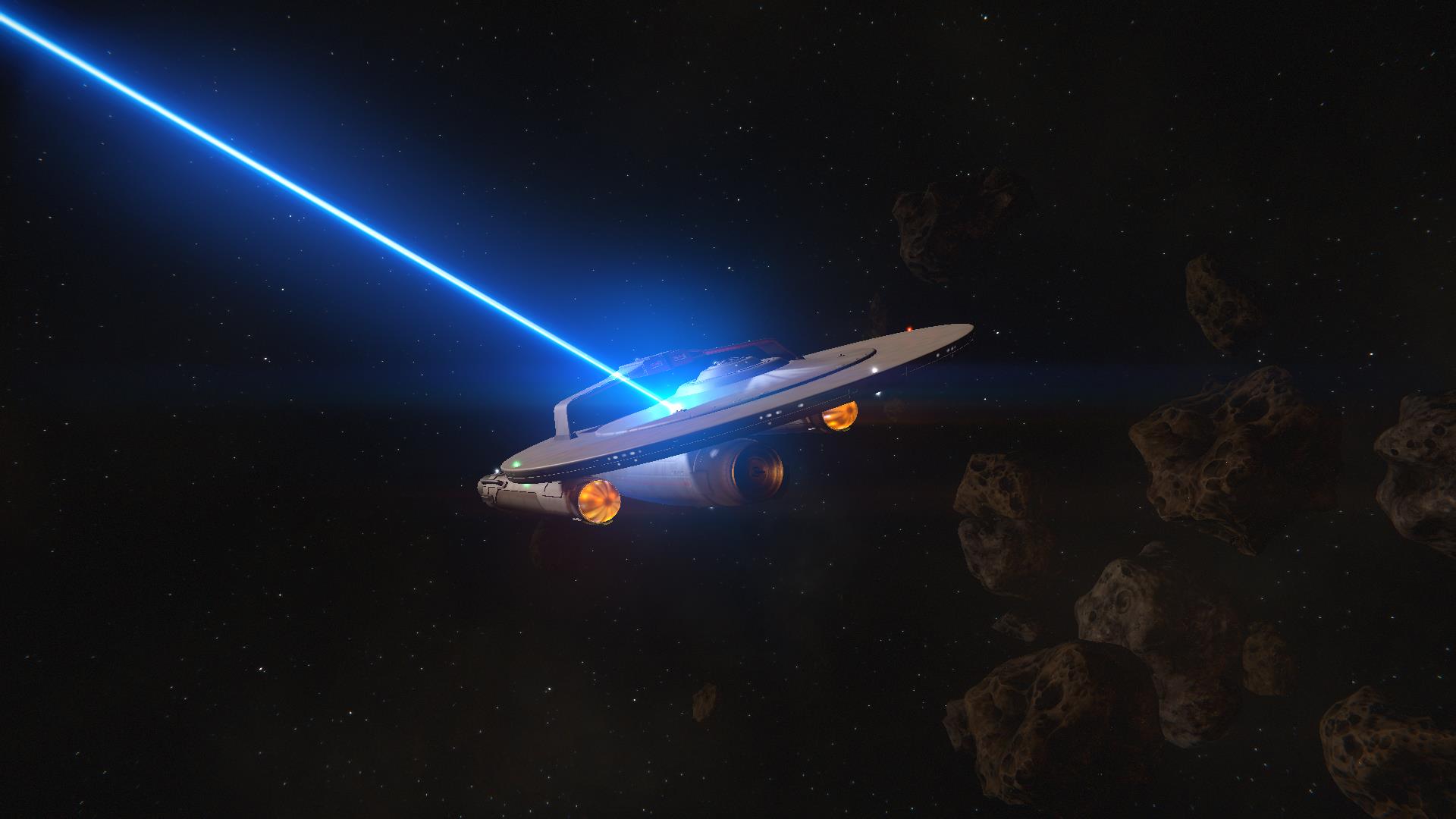 Before I dive into detail, I will first outlay some of my guiding principles for designing gameplay in AotF:

These are some lofty goals, so how have I gone about striving towards them in Sins of a Solar Empire? 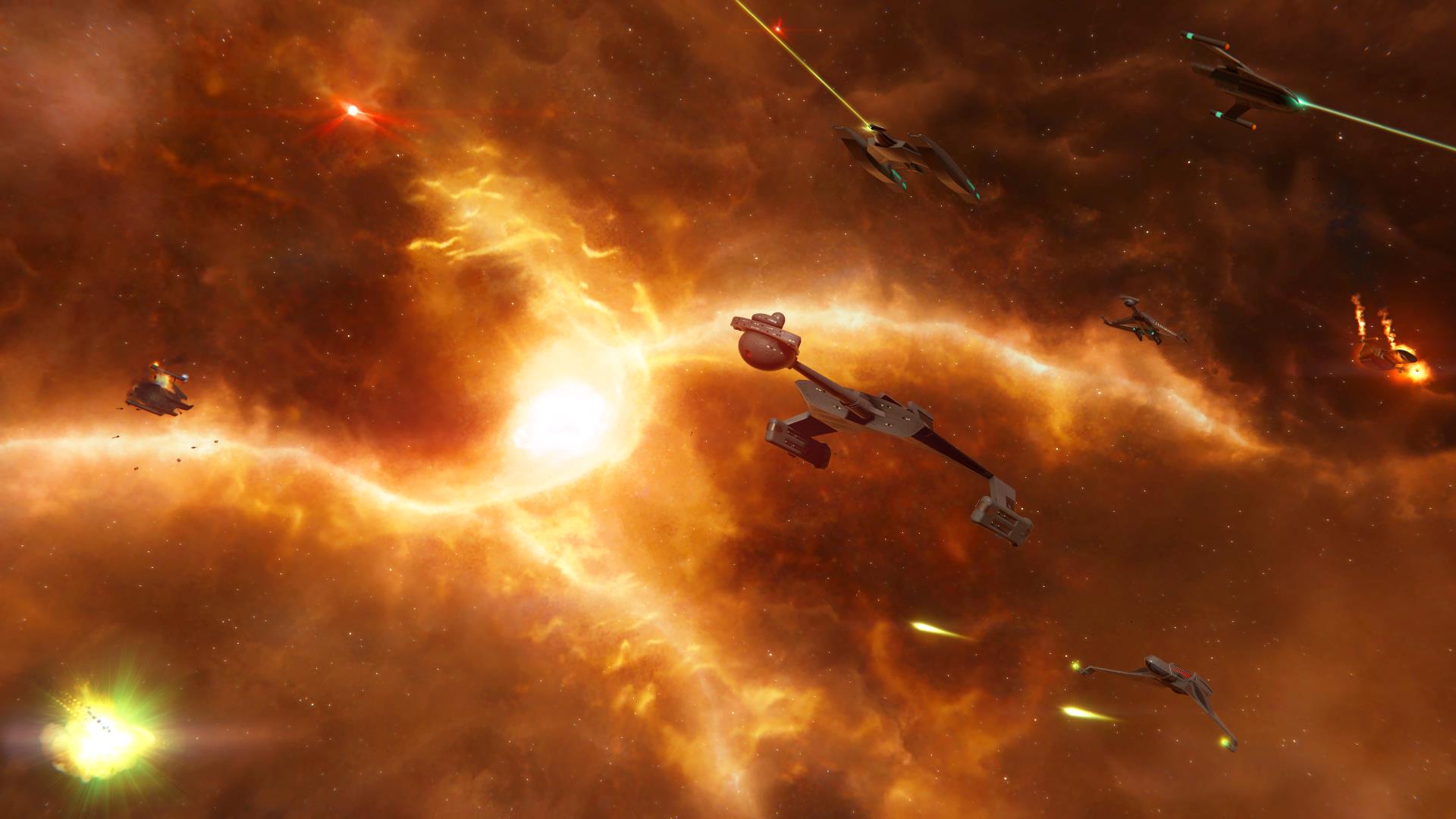 To begin with, I have overhauled how ship defences function. Shields, in particular, have seen the most change. While they still serve as the primary regenerative Hit Point pool for a ship, they will now resist 75% of incoming Torpedo damage, allowing a well shielded ship to avoid enemy alpha strikes and slow the initial phase of the battle. In addition, shields have a new mechanic once knocked down to 0. They will cease their passive regeneration entirely and begin a recharge cycle (usually around 60 seconds), after which time they will come back online, instantly restoring a high percentage of their total capacity. 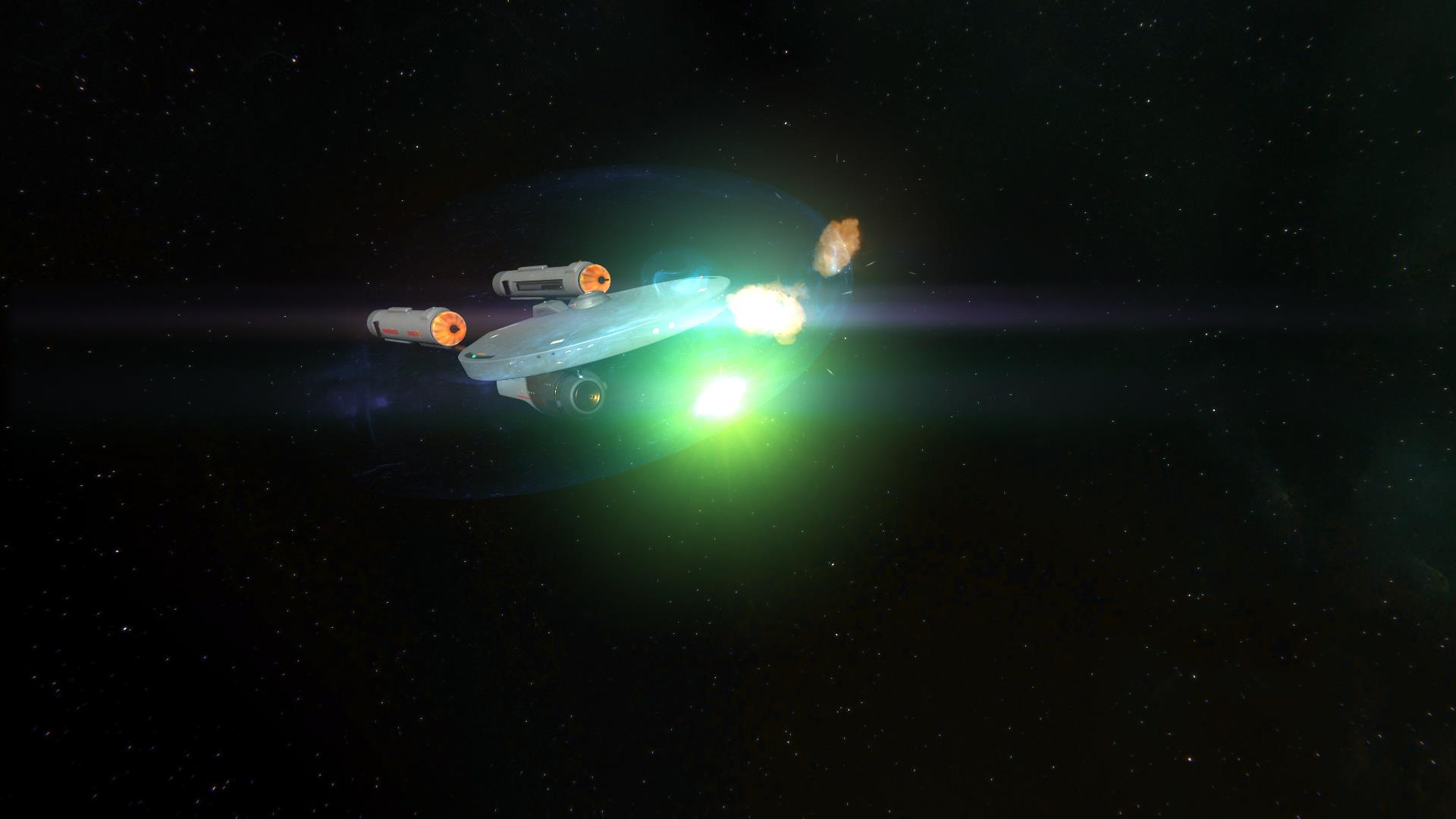 Hull has some similar mechanics, in that it naturally resists 33% of incoming Energy damage, but has no resistance to Torpedo damage. This leaves unshielded ships open to large bursts of damage from Torpedo salvoes, and highlights how fragile ships can be without shields in Star Trek. 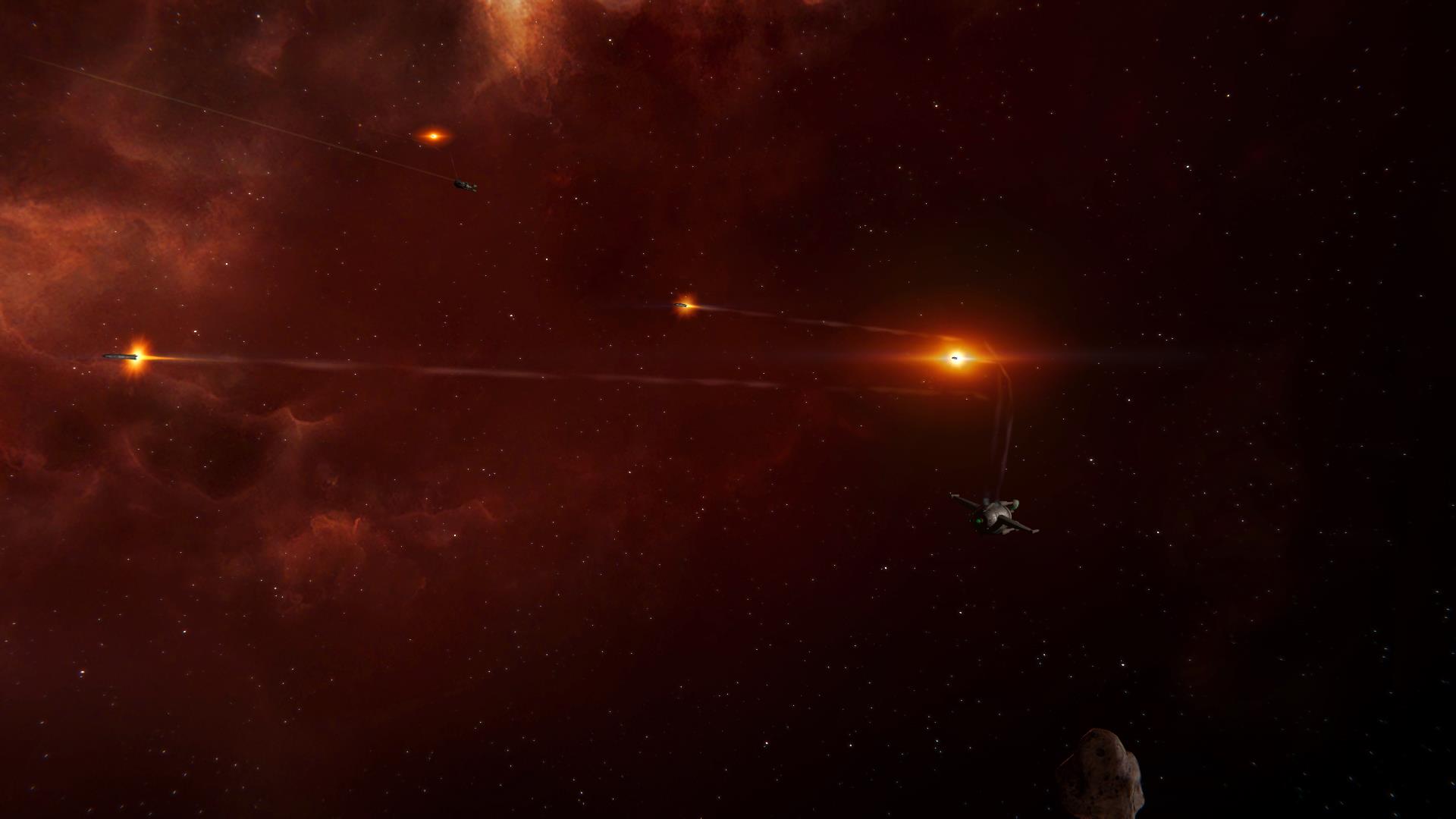 In order to help keep this system simple to manage in combat, we have largely done away with behind the scenes damage types, so the damage per second number you see in a ships stat card is exactly what you can expect it to do.

With these mechanics in place, there is a noticeable difference to how ships interact with each other depending on the state of their shields, and several simple but highly rewarding micro techniques available to a player that do not involve ability casting.

In particular, we already see ships being pulled out of combat to recover their shield, as well as hit squads of torpedo specialists that are kept in reserve until they have an unshielded target to tear into. Even ships that have static movement in combat are often kept moving through the use of regular move orders to benefit from shield recovery mechanics. 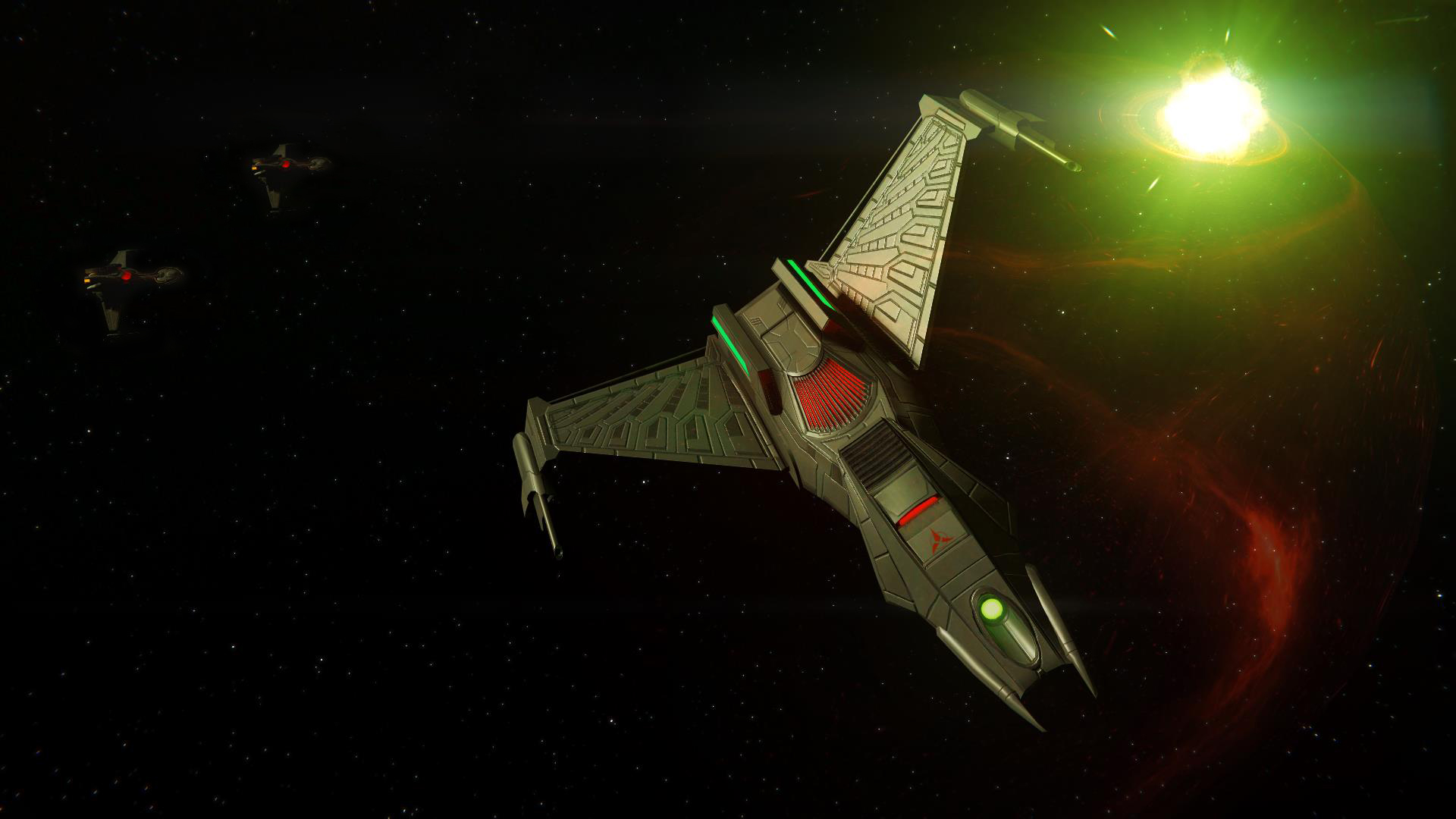 These mechanics also allow for a naturally occurring and easily understandable counter system - one stemming from hull:shield ratios.

Rather than needing to look up a damage chart, you can instead look at the HP proportions of an enemy vessel and immediately understand whether you need to bring a lot of energy weapons, torpedoes or both to kill it.

But what about early Starfleet and Romulan vessels I hear you ask. Don’t they have no shields? Surely this is a crippling weakness! Well, it certainly is a weakness, but Polarised Hull Plating has been given careful thought as well. As long as a ship that uses Polarised Hull Plating has Antimatter, it will have significant improvements to its damage reduction, especially energy damage reduction. In addition, such vessels tend to be built far more ruggedly than shielded vessels, leading to much higher hull and armour scores than average.

Overall, ships like the Columbia or Neptune will be able to absorb a huge amount of punishment within a single battle, but will struggle to recover their defensive capacity without a shipyard to conduct repairs. This leads them to favouring short, sharp battles close to home - a playstyle that may not be for everyone, but can be powerful in the right hands. But for those that really can't do without shields, do not worry - the Coalition of Planets and Romulans both have plenty of access to powerful shielded ships as well. 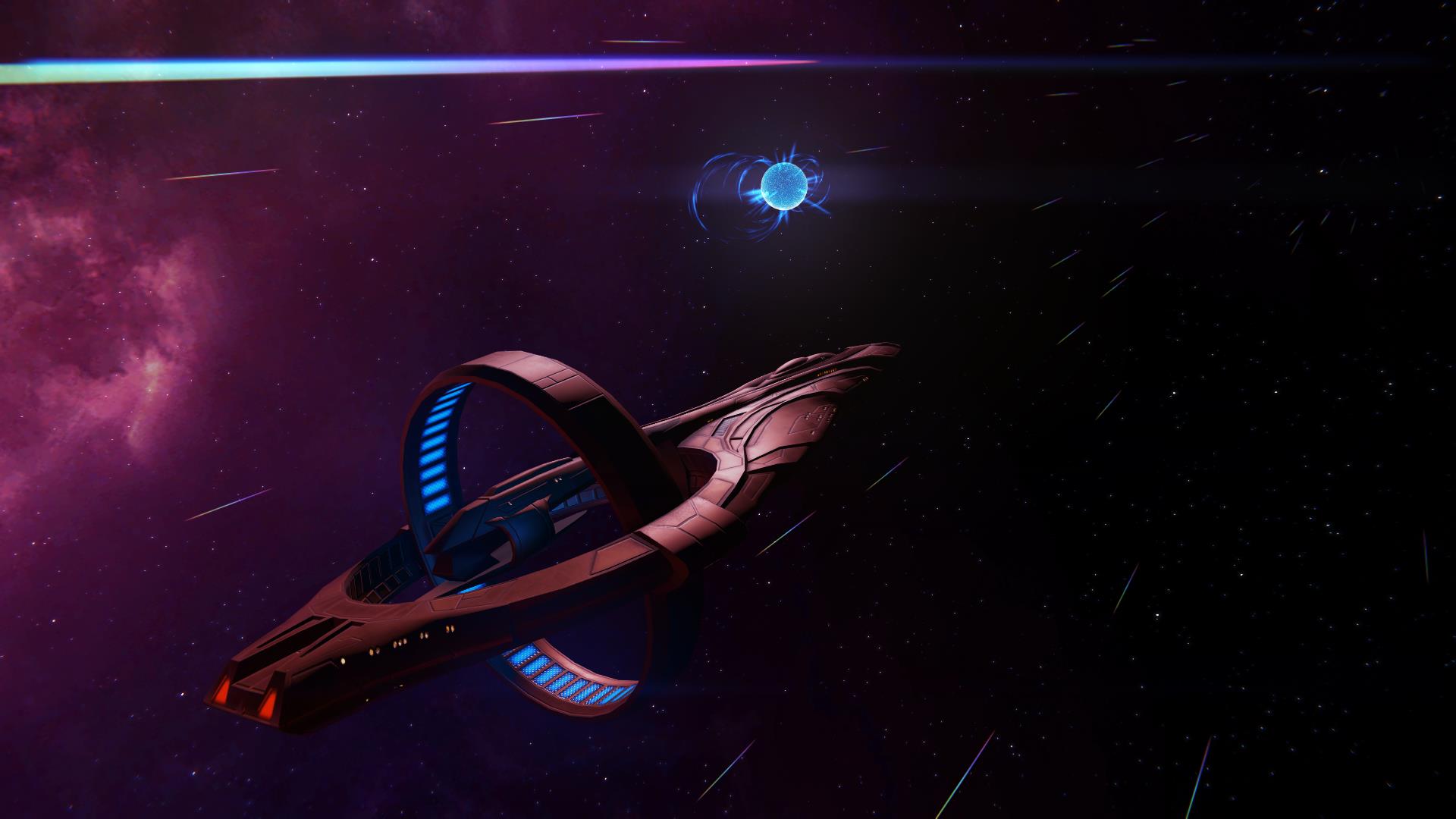 The Klingons have the final part of the defence rework all to themselves - Frontal Damage Reduction that is dependent on their shields being raised. This is to simulate the Klingon tendency to angle their shields entirely to the front when in battle. They tend to have slightly lower total shield hit points to account for this, and to encourage flanking of Klingon ships. Against a less attentive Klingon player or the AI, this can be fairly easily to achieve, but a skilled Klingon player can exploit this quirk of their defence profile to great effect, shrugging off damage that would annihilate another species’ vessel.

Perhaps the best part of all of this is that everything I have described so far can be learned in game from tips, ability tooltips and buffs visible on ships. I have put extra attention into ensuring that in game text is as informative as possible - although this sometimes comes at the cost of space for lore, we believe it to be worth the sacrifice.

As you can see, Echo, along with Brutoni, are really working hard to make the combat in the upcoming re-release of Ages of the Federation feel as authentic as possible, with each faction having a genuinely distinct play-style while still being balanced and fun. As I'm writing this, the mod is already almost completely unrecognisable from its previous version, and we're very excited by what these two are doing and plan to do.

In short, it's gonna be fun!

Till next time, be good. But not too good.
- Orion

The Unstoppable March of Progress

We're back with Ages of the Federation's first progress update for 2022.

The Time to Vote is Nigh!

We descend into the pit of battle, but can't win without your support.

Ages Of The Federation V1.01 - Beneath the Raptor's Wings

We're happy to bring you Ages of the Federation: The Four Years War - Beneath the Raptor's Wings. Due to the COVID-19 situation globally we are forgoing...

Ages Of The Federation V1.00 - Beneath the Raptor's Wings (Obsolete)

We're happy to bring you Ages of the Federation: The Four Years War - Beneath the Raptor's Wings. Due to the COVID-19 situation globally we are forgoing...

Ages of the Federation v0.76 (Obsolete)

We're happy to bring you Ages of the Federation 0.76. This version fixes a load of errors in 0.75 and fixes some issues that you were having with zooming...

Ages of The Federation V0.75 (Obsolete)

This version contains playable Federation and Klingon factions. More to come soon..ish. As always, unpack the contents into Documents - My Games - Ironclad...

I can't believe I haven't even played this once yet! Must have forgot about it because I do vaguely remember following the progress leading up to it's actual release. Last 2 and a bit years have been a bit of a nightmare for most people. I'm glad I finally remembered to come back to get the file. Thank you, in advance, for everyone's hard work.

It is a good mod and a bit hard to as it changes the way you build fleets.

I highly doubt you'll be adding a class for the USS vengeance from the kelvin timeline.

I can put your mind at ease that we will never add the USS Vengeance in any form.

one of my favorite things in this mod is the unique call in ships like andorian or even xindi via ferengi. in the last version you guys took out the vulcan call in / deploy ships mechanic.

can you tell us a bit about the minors in the new version? it really seems a shame to spend so much work on the models and weapons and not have player uses for them. i get not letting us have caps like the xindi aquatic but having an NX backed up by andorians,vulcans etc is allot of fun. same to be said to play romulans and have 10 or 15 xindi ships from the ferrengi

Vulcan and Andorian ships (and Tellarite for that matter) are going to be buildable ships alongside the Enterprise era Human ships for the new Coalition of Planets faction in the new version.

extremely curious - what sort of special abilities does a tellarite capital ship have?

The Tellarites (currently, at least) have no capital ships in the roster. Their ships tend to take support roles.

Please tell me the Tholians joining the mod isnt an April Fools joke!

It was indeed an April Fools joke.

Xindi are planned. Tholians were an April Fools.

Legend of the Galactic Heroes - Sea of the Stars Sins of a Solar Empire: Rebellion