What is the Crazy Mod?
Absurd. Hilarious. Insane. Forget realism, that went out the window a long time ago. The Crazy Mod is a comedy-based mod, one that focuses on creating the most fun and crazy unit designs ever devised in Zero Hour. Where else can you find melee tanks, hang-gliding terrorists, and fan weapons? Eventually, the mod will add 3 new generals to the game, even one who uses cookies to defeat his opponents!

Utilize the newest in melee technology with new melee vehicles, such as the Buzzsaw Paladin, Pancake Crusader, and Swordion Tank. Literally blow enemies away with the Fan Truck! Dominate the battlefield with all-new Super Units, one unique to each faction. These include the Lead Beam, a massive 105 barreled Gattling Cannon, the Demo Ballista, which launches Terrorists on hang gliders at its targets, and the Battletank, an amphibious Battleship on tank treads.

To help bring more resources into the community, here are two 3D models, originally made exclusively for the Crazy Mod, that you can now use in your own public or private modifications for C&C Generals: Zero Hour.

The first of these models is the USA M1A1 Abrams Tank: 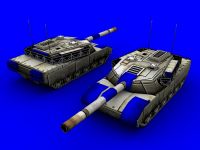 One of the most iconic tanks of the USA, the M1A1 Abrams Tank is equipped with a standard tank gun which does a bit more damage than the Crusader tank. It has been modified slightly so it doesn't have the breaking turret, so you don't have to worry about that when you put this into your own mods.

The second of these two models is a graphical update for the GLA SCUD Launcher: 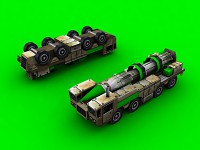 The original model of the GLA SCUD Launcher had a few problems, which became very visible in the Crazy Mod. For starters, it has no underside at all. You could see right through it like a window. This remake adds an underside to the GLA SCUD Launcher, and also makes the wheels a bit rounder. Those hexagonal wheels must have been really bumpy to drive on.

Get both of these 3D models in the addons section of the mod profile.

More 3D models and other downloads to come soon!

Download the newest update to the C&C Crazy Mod now!

Check out the four newest renders for the GLA Demolitions General, all made in just three days total.

Crazy Mod Back in Action

Back from a period of inactivity, check out the two newest renders from the Crazy Mod, the GLA Battle Bendy Bus, and the GLA Stalker Tank.

Massive computer issues will delay the mod for an unknown period of time. I can't even so much as run Generals: Zero Hour right now.

The GLA SCUD Launcher remake in the Crazy Mod is now available for use in your own mods. Download it now to give your Zero Hour mod a bit of extra graphical...

The M1A1 Abrams Tank of the Crazy Mod is now publicly available for use in your own modifications for C&C Generals: Zero Hour. Download it now, and...

A very long overdue patch to the very buggy Crazy Mod Version 0.5, the Version 0.55 mod fixes bugs that broke the campaign, made units ineffective at...

The very first public release of the Crazy Mod, Version 0.5 brings a couple new units and changes to all the factions. An enhancement mod for Zero Hour...

Well, at least i can revive the vehicles in my mod somehow...

RIP
What a glorious looking mod