Remember that old wireframe-graphics arcade game from the '80s called Battlezone? Ever wonder what it would be like if it were top-down and had more than one tank? Well here's my answer: C&C: Battlezone! This total-conversion project, begun in May 2009, is just for single and multiplayer skirmish; there is no campaign to speak of. It's fast intense wireframe simulation combat in the air and on land between ground forces and bases. Skirmish modes include Classic Mode: only units straight out of the arcade game are buildable; Standard Mode: Two tank types, infantry, aircraft, and base defenses are buildable; and Advanced Mode: Infantry can garrison neutral structures across the custom-made maps, and new units are buildable, such as Gunships and APCs. The AI is also a challenge even on easy, making good use of rush and flank attacks. The project also includes ten all-original soundtracks and many specially-crafted maps.

You will choose from Gunboats, Destroyers, and Cruisers in your dominance of the wireframe seas. Transport ships will come in handy on island-hopping maps to get that last Exchange building. 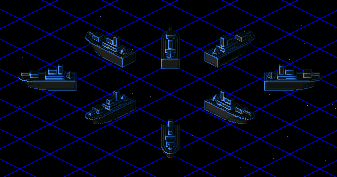 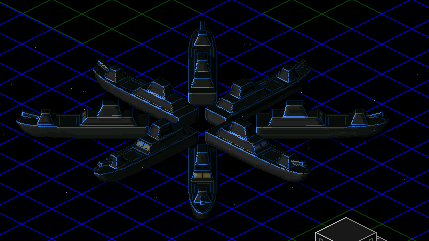 The other vessels are in the design phase right now, so more to come as they are completed.

Development continues, but the BhoM has something for you to chew on in the mean time.

List of available units and defense structures and which modes they will be utilized.

On life-support... Life has come first lately, but I have major website changes and updates to produce hopefully over the summer.

Well, I was planning on releasing .60 Beta next week but it' looking like that's not going to be possible. My final deadline is Christmas this year but I'd like to get it sooner rather than later. Good news is I have received some positive feedback from beta testers and am moving forward with their suggestions.

It make me thinks to Darwinia, great athmosphere :D

Why some people gave it bad ratings? This is one of the most creative mods I ever seen!

Original, awesome, and will play it when I have time. Looking forward for more developments on this one :)

I like this mod! It reminds me of Darwinia/Multiwinia in case of graphics. Anyway, I like this style. And it sounds accurately.
Thanks and keep up good work!