FOR UP TO DATE INFO GO TO THE OFFICIAL BRYTENWALDA REPOLISHED THREAD IN THE BRYTENWALDA FORUMS HERE: Forums.taleworlds.com

"Some people have been reporting zips filled with errors, this is because you need 7zip
Files are not damaged, you need a different software. :D
7-zip.org " 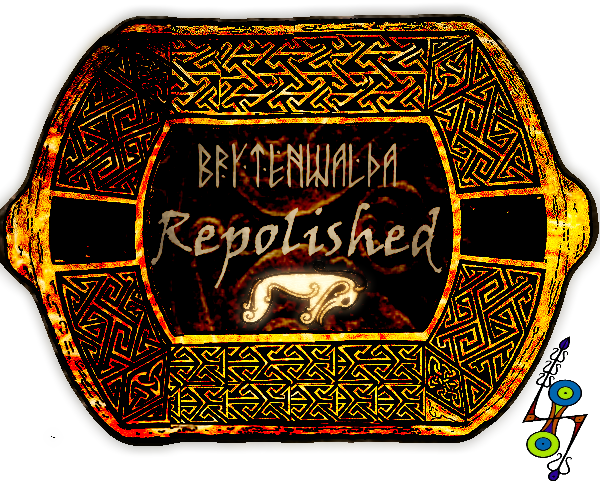 BRYTENWALDA SPECIAL EDITION 1.41 (THIS IS THE BASE GAME, THE AWESOME BRYTENWALDA!)

Many Many thanks to the Brytenwalda team for letting me distibute the full client already modded. You guys rock! ***
(remember guys, always ask original modders and developers for their permission to redistribute their creations!)

Thanks for voting and helping Brytenwalda Repolished on it's quest to become the 2021 Mod of the Year. You are now in with a chance to score some free games from our #modlove collection. Help this mod secure more votes by embedding the widget (or link) we have included below on your favorite sites.

-Added new .lods to several of the Bl-type shields (those I missed in 1.03) in shield3.brf to avoid them popping out of existence when watching units carrying them and walking/riding away from them. Added up to 4 .lod´s to all those shields, this is a more inclusive work than the one done in 1.03 and now adds more .lod´s than before making the shields stand out better at much farther ranges.

-Fixed Villager Woman troop trees by having subsequent troop upgrades be able to shoot their included bow and arrow with skill, as their listed skill was set to 0 in vanilla despite having enough Power Draw to wield them.

-Added two new bandit troop types to add variety to bandit spawns and have a legal way to obtain the named Eye-popping" bow in game. These are the Fliming, the Archer Bandit and the Wearg, an Elite Archer that MIGHT carry the Eye-Popping bow.

-Rework of certain tavern npc´s clothing/face codes to avoid making them look like clones of each other and represent a wider variety of people present in the current time frame the mod portrays, these faces will be wildly different to the stock ones, and appear to randomize a bit over their initial face code for extra fun, did the same to the "Hores" because they looked too alien with their huge almost unieyes staring at you from the bottom of their soulless bodies.

-Fix of ALMOST ALL scenes in static areas of the map that had mismatching trees/rocks/items floating around or at unseemly angles. This has been the most time consuming part and have invested over 6 hours per day(for a week) slowly looking around for them. THERE MIGHT STILL BE some floating pieces around, so please report them if you see them for future fixes. A HUGE Thank you to Kraggrim from the Taleworlds Forums for his almost OCD Behavior in spotting some of the nasties and "beta-testing" the early scenes for further tweaking. As a matter of appreciation he is now included as a Random Tavern Traveler in the world called: "Kraggrim the Thorough, and works as regular traveler. Thanks man!

-Altered the Flora that calls on the tree meshes to avoid Pine trees appearing in places there should be only rocks, this is a strange form data/mesh set imported from the Graphics Pack and it has finally been cleared. There will no longer be pines popping up in the oddest of places in Great Britain, this leads to the next change ....

-Most of the Pines in Great Britain have been obliterated. Historically , there were no Pines of any type (except a not very warband pine looking Irish pine) in the current time frame the mod portrays. These have been replaced with more generic looking trees.

-Altered some party templates to include the new two bandit troops, The Fliming and Wearg will appear now in Bandits Gang and the Wearg in Band of Thieves and Murderers roaming spawns.

-Altered the coefficient and rgb outputs of some bare shoes to avoid having them look like shiny waxed legs of unsexiness in random troops/npc´s.

-The Dreaded Ram Bug fix has FINALLY been solved, thanks to Motomataru publishing a fix years ago and Kraggrim kindly compiling it and giving away the changed text in the scripts.txt, right now ALL Castle scenes that have a Ram will now , given enough manpower batter away all THE DOORS! This means these castles are now very breachable so plan accordingly. During Playtesting the scene had a nasty Cart placed too close to the defender´s gathering point, making some of them stuck in a No AI MESH area. Decided to eliminate the offending cart, it works much better now. Bear in mind that although you will get some defenders in this scene climbing down the stairs to gather OUTSIDE the fort, this is part of the defender spawn mechanic that mixes infantry with archers near the wall gap. It´can´t be avoided, so consider them a bunch of overbearing zealots that want to die stopping the Ram of Doom that will now break away the doors of their safety ... in my case I consider those guys are just drunk and don´t know what they are doing XD

-Thanks to Kaggrim from the Brytenwalda Forums I have added sheep now as an object in the item_kinds1.txt, for future use/updates , also planted 2 of them in the "Your Lair" Scene in the Goat Pen to show them to the world if you curious.

-Altered the Personal Camp scene a bit, moving the Cart so it actually touches the ground plus seeding some grass/bushes and replacing the tent texture with a more dark/rustle/stain infused one.

-Mynyw and Abbercurnig Monasteries battle scene spawning location changed, even though I believe monks back in the day were pious and church raiders actually ruthless men, I dont believe any of them were Aquamen willing to fight underwater battles without breathing equipment, so no more Waterworld underwater scenes.

Some of the upcoming Changes coming in 1.05 as I try to keep polishing the good ol´ Brytenwalda for a better and more smooth experience

Some of the Changes in the Repolished Versions (Standalone and Submod) that affect Brytenwalda 1.41

This compilation of mods, "Brytenwalda Repolished 1.02" is my effort to share with the community some of my own personal custom items alongside some of...

This compilation of mods, "Brytenwalda Repolished 1.02" is my effort to share with the community some of my own personal custom items alongside some of...

I am not able to enter Pen Rhionydd, the village near the rocks, please help, I get stuck next to the village, but I can't enter it.

I'd recommend the more current Reworked Mod. Last version was only a few months ago.

Its' unorganized and flawed. For example he has new companions that he call Bandittrainer instead of giving them proper names. Theres also a lot of bugs.

please make lords killable in battle, the only mod i see that does this is medieval conquests but i would much rather have these features in brytenwalda or even better viking conquest now that it is open source

Is this mod re-polishing historically accurate ?

All great all fine but those unit names fried my brain, cause they are wery hard to understand whatever language it is.

Good mod but have a lot of bugs.

I must say that it's one of the best mods I ever played :-)