Eighteen years have passed since FreeSpace 2 and the destruction of Capella, and the shattered colonies of man are finally ready to re-open the jump node to Earth. As the Alliance teeters on the verge of total social collapse, the Security Council deploys the elite 14th Battlegroup to re-establish contact with Earth, and young pilot Samuel Bei finds himself once more under his estranged father's command.

Age of Aquarius describes the journey of the 14th Battlegroup as its mission to the Blue Planet goes shockingly wrong. (StrategyInformer has very kindly provided a mirror for us.)

War in Heaven takes place eighteen months after the events of Blue Planet: Age of Aquarius and details the final stages of the civil war between Sol and the rest of her colonies: a war without good or evil, only shades of gray.

Built at the cutting edge of the FreeSpace Open engine, Blue Planet is a fan-made conclusion to the FreeSpace saga, a story of sacrifice, triumph, and destiny, and one of the most beloved FreeSpace mods of all time.

Hey everybody! Just wanted to deliver a quick update, since we've neglected ModDB for too long.

As those of you who've been following our forum on Hard Light Productions know, we released Act 3 of our story, 'Tenebra', and we hope everybody enjoyed it. If you had technical or gameplay issues, please let us know.

We're also closing in on finished with our voice acting efforts for Acts 1 and 2 - please get involved! We're currently particularly interested in women's voices, both because we need to cast our female characters and because we want our cast to represent the diversity of the FreeSpace future. Once these efforts are complete, we're planning to release a standalone Director's Cut version of Blue Planet that will not require FreeSpace 2. 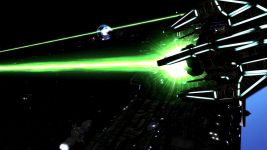 Our short story 'Morrigan in the Sunglare' will appear in an upcoming issue of Clarkesworld, one of the finest science fiction and fantasy magazines in the world. We're eager to hear your response.

Lastly, as ever, work continues on our ongoing story. As always, the demands of life and chance mean that the pace fluctuates, but the team's all here and happy and we're looking forward to bringing you the conclusion of the war between Alliance and Federation.

The War in Heaven Christmas Update

In which many things have changed for the better, and other things have been made faster.

The War in Heaven Developer commentary

Wherein we blather on a bit while someone plays our missions

Music is in the air

18 months after the 14th Battle Group's disastrous expedition to Sol, the civil war between Federation and Alliance enters its apocalyptic final phase.

Truly hoping the final 2 Acts will be completed someday. This mod and Age of Aquarius are awesome and we need to see how the story ends.

I cant get war in heaven 2 to load, it just says fail to load mission with a bunch of errors before it says it.

You can get act 3 off of the hardlight forum.

Ok,i must say,this is the best,by far, FS2 mod,but i have problems.
First,EVERY time i load a level,i get a warning,or error,like:
For asteroid'Small Asteroid' detail level mismatch (POF needs 3)
<ni module>! KiFastSystemCallRet
and so on
second lag is minor,it is just that all weapons appear as white-yellow balls(when they are shot),i just completed the mission ...with blue seas,and i dont know if there will be any more problems,though this problems do ruin gameplay,so if you know how to fix this,respond pls

Hey, did you get this sorted out?

Ask at hard-light.net and you'll probably get help a lot faster than here.

SUCH a great mod!

This mod is a drug, it sucks you in and does not let go. I wish more games like this were out, but that might push the limits of the phrase 'too much of a good thing'.

Between The Ashes FS2_Open Source