_A B O U T
Back2Fronts is an extensive mod that will overhaul your Call of Duty 2 game to a next level. This mod brings more variety, intensity, realism and battle-like experience. Try new weapons, fight new enemies, fulfil new missions and explore new options. Mod is SP and MP friendly (although primary part is SP).

Please, DO NOT WRITE into COMMENTS things like bugs, your ideas, questions or requests. Instead - SEND US EMAIL to the address above. The number of comment pages here is too large and we cannot browse all of them for searching of your comments. Thanks for understanding.

Hi everyone! Long time no see regarding news posts. I have 2 major informations to share...

Firstly, I am searching for TRANSLATORS. Back2Fronts mod will always be in English by default. But I want to offer various language localizations (translations of all texts in mod) when patch 1.1 is released.

I already have Spanish thanks to Vassili Tzaisev and ernestin1. I plan also the French, Italian and German.

You can apply at my email: chaloupka.mar@gmail.com

EDIT (July 6th, 2017): I got already translators for French and Italian. Still looking for German translator. P.S. if any of you, followers, want to offer translation of some other additional language, feel free to contact me.

EDIT (July 9th, 2017): Now I got also a translator for German. Some other languages are discussed as well but it's too early to announce them. 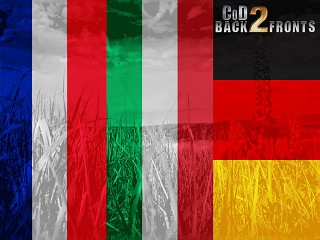 Secondly, I wanna update the list of changes for patch 1.1 so you can all see what's new.

7) Silotown FlaK88 made invincible to prevent breaking the level script

12) full ally vehicle names are returned, you can still switch them on/off as you wish
13) support for friendly German and Russian vehicle names added, but there are sadly no custom tank-ride missions to put this feature into use though

16) Russian "mission failed" message changed (you are a traitor to the motherland!)

21) binoculars system tweaked (binoculars are assigned to player depending on faction)
22) added support for custom maps (undefined - default loadout)
23) gunsight system for tank missions created (supports multiple tanks), but there are sadly no custom tank-ride missions to put this feature into use though

30) radio model for Angoville mission made

Latest info about already implemented fixes in the Back2Fronts 1.1 patch.

The collaboration between Back2Fronts and WCP has pretty much fullfilled its original goals and gives some awesome new features. Aside from that, a ton...

This news announces the cooperation between the Back2Fronts mod and the WCP mod. There is also some other info - recently created stuff, development notes...

What Is This? This addon make you not panicking when the ammo is running out, so dont worried.

This modification changes all German-spoken voices into real German taken from German version of CoD2. Included are all battlechatters and pain/death/charge...

This modification changes all German-spoken voices into real German taken from English version of CoD2. Included are all battlechatters and pain/death/charge...

It nearly october and i don't see patch 1.1

where can donload 1.1version?

August has started, and I don't bloody see the patch of B2F 1.1

¿It's already July and they haven't released patch 1.1? I hope the mod is not dead.

Will there be a British D-day landing map of any kind like Gold beach or Sword beach?

It is an excellent work that these guys are doing. With more models and new animations for COD2. The new sprint is fantastic.

The REALITY of War Call of Duty 2