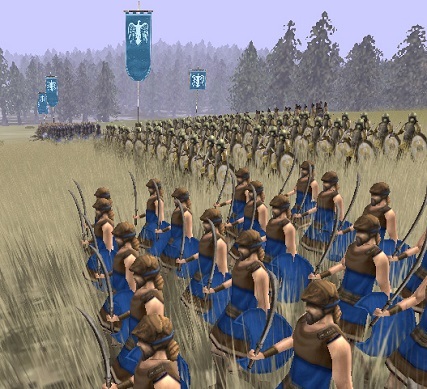 "Greetings to the Duke, the leader of the mighty Saxons, a descendant of Woden - the great forefather! Now presents a council of elders you the reins. It's time for war, our nation honors the brave and indomitable tribal charter, which states that the king would not have great Saxons. But the leader of the military we need to short the time when the enemies to the ground level the reshimsya. Let our ships bringing terror to the coastal village! Let landing sudden plunged them into a panic. Looted gold for our glorious women, bloody glory we'll cover you! Headed the same army, punishing all those who ckramasax stand in the way of the gods of the seas!"
(by E.Ravkovic)

How to install:
Just put all files to RTW BI directory. Replace all original files. Don`t forget, mod is for BI 1.6 patch.

Second version will add to mod more factions. Old factions are replaced to newest. There are different world and different gameplay. In newest version you can play by Hyperborea against many fantasy factions. I think, its will be cool for you.

This version is about different fantasy world. There are human race, but there are also another races from alien planets. Humans have technologies style like in early Medieval age. And they are fight with each other. But there are some threats for all mankind. Starblade Legion and his army came to human world and made base near Shadow Empire. Also mighty Argothian race decided to destroy human kingdoms and kill all people there. There is really difficuly situation in this world. And you must win the campaign.

Moddb.com
Full factions list of this version you can read there in News

Thanks for voting and helping Anglian Kingdom - Fantasy edition on it's quest to become the 2021 Mod of the Year. You are now in with a chance to score some free games from our #modlove collection. Help this mod secure more votes by embedding the widget (or link) we have included below on your favorite sites. 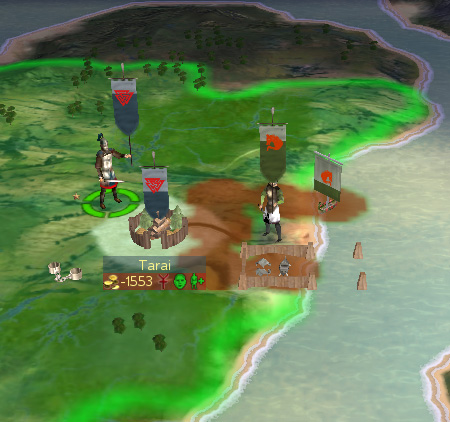 This is campaign with only one playable faction - Shadow Empire. You must take control on almost 35 provinces and make peace in your lands. Shadow Empire have war with several big states and mighty Marid Empire. Barbarians are almost everywhere. And resourses can simply finished. Its better to don`t lost start army, because if you will have economic crisis, you can`t call any units to army. In first turns you also must stop invasions of Marid assaulters, Bear Tribes and Nurhanchi Rebels.

You are now have 2 playable factions - Marid Empire and Argothian Horde. Argothians have only one city in the west borders of Marid lands and good army of invasion. Marid Empire is very strong and powerful faction, but have war with many other factions and with Nurhachi Rebels. In the desert in first 3 turns you need to defeat big army of Rebels. All win conditions are very simple.

Its campaign of war between many factions factions in original map. Its very simple to play as Island Empire, Arctlings or Hyperborea. Other factions are much harder. This campaign is the most convenient and haven`t any errors. Many rebels there have big armies, so be ready for long sieges of their cities. Win conditions are normal there.

The most easy campaign for neophites in Total war games. You have only 1 playable faction - Northland Tribes. This campaign have very simple gameplay and win conditions. You have big armies almost in the all campaign map. You must take control on islands and defeat Hyperborea. You have big and powerful army, so its can be easy for all players even in Hard gameplay level.

This is more harder campaign and its for players with experience. Its have 2 playable factions - Marid Empire and Starblade Legion. If you`re playing by Legion, you must defeat all Marid Empire. Its better to use start army. If you`re playing Marids, you need to defend your country from powerful alien enemy. Rebels are also powerful there. Win conditions are hard there.

This campaign have new campaign map by my friend Kardinal. Its includes more cities in the east and more interesting things. You have ability to play some factions there and of course new one - Rebel Horde. This campaign haven`t got win conditions. You must play there without any targets. Just have fun. Sorry, but this campaign still contain some errors. If you don`t like it, play other campaigns.

Thanks for reading this!

Download link of Hyperborea Rising will be there soon.....

Article about mighty Argothian race in the mod and their units.

List of AK Fantasy campaign factions and some information

Second version will add to mod more factions. Old factions are replaced to newest. There are different world and different gameplay. In newest version...

This is historical version of mod about Anglo-Saxon invasion to Britain.

where is whole map imange ? did you reworked map ? resised ? if no then its nothing special.... darth mod still the best then..

Full beta version was released today in my birthday day. ;)

One big happy birthday from me! ^_^

Looks like a great mod, i'm downloading now, glad people are still making an effort with this game.

Romania Empire ? :)) really ? has anything regarding Romania country?

No, there is no real countries, only prototypes. ))) and thanks for your words sir.