The Battle for Middle-Earth: Reforged

The team behind this project is introducing The Lord of the Rings: The Battle for Middle-Earth franchise to a brand new game engine - Unreal Engine 4. Relive the magic that made this franchise stand out in the RTS genre in glorious high definition.

The Battle for Middle-Earth: Reforged is a non-commercial fan project currently under development.
All rights belong to their respective owners. 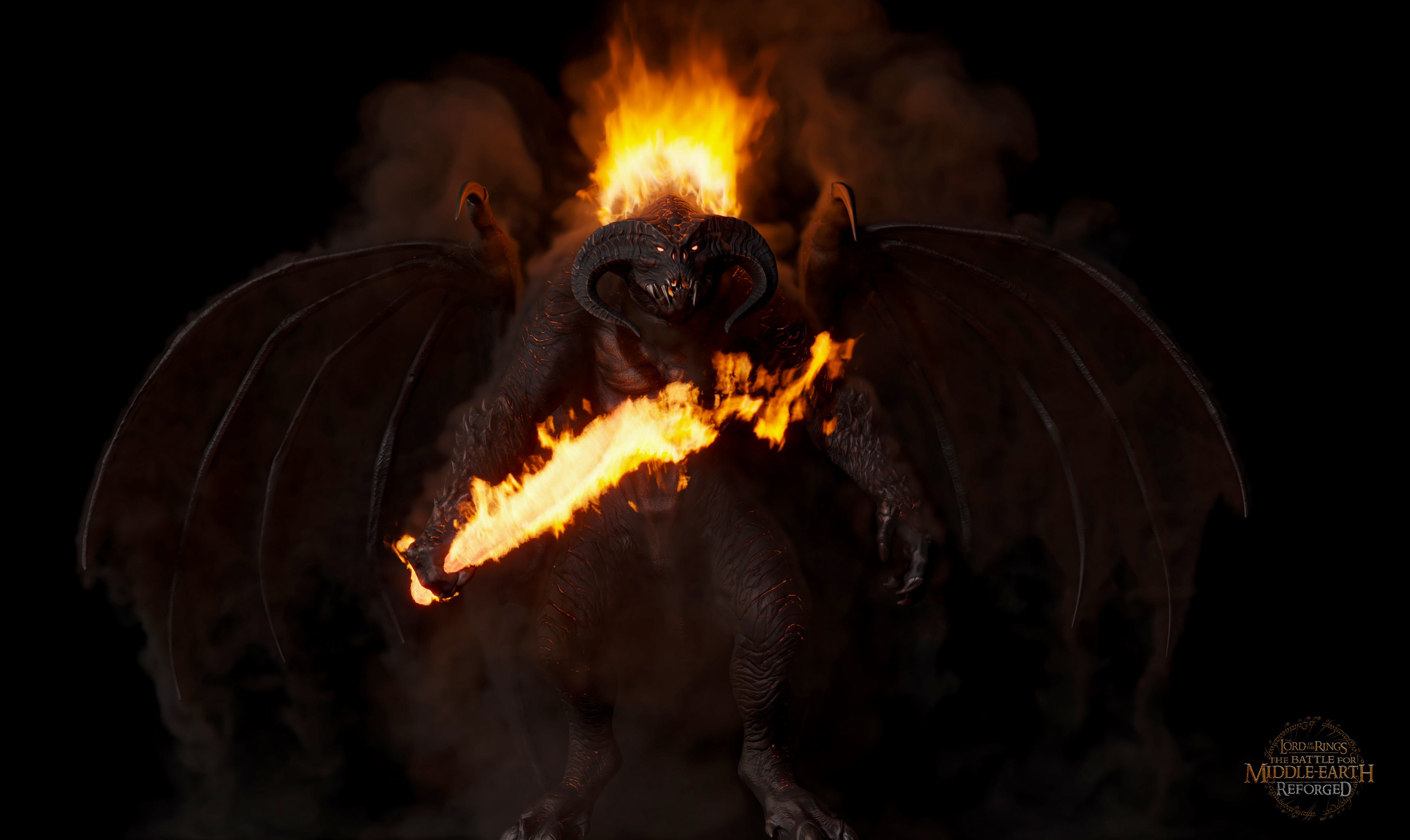 It's been a long time since our last update and we've been working so hard that accidentally we disturbed the balrog from its slumber. Although he did cause some harm, we managed to put him back to sleep. To our surprise our urveillance cameras captured him in detail and it would be a great shame not to share the footage with everybody. Please, enjoy the video below!

Primarily known as Durin's Bane, the demon of fire and shadow is among the most powerful and captivating characters of Middle-earth. Making him was a big challenge most notably for our best 3D sculptor, animator and VFX designer, although all work on him was difficult.

The balrog may be the most difficult character to make as he is a huge winged monster that constantly generates large amounts of particle effects - darkness, which is essentially a cloud of smoke, shrouds him, often revealing his arms and head, and, of course, flames on his back. But even that isn't all as his weapons are flaming too.

In game Durin's Bane is a playable character accessible through a well-known Spellbook special power. The balrog will remain largely the same character - a mighty monster of many abilities such as whip strike and fiery breath.

Stay tuned for the next and so far the biggest update that will cover our progress of many months.
BFME: Reforged Team

Enjoy the recently released Current progress 5 video. Look through the article to get additional details.

The first of gameplay revealed

The time has come to show you some of the gameplay, for the first time ever. Enjoy watching in 4K!

Take a look at the entirety of Isengard weaponry fully prepared!

The time has come for the community to witness the work over Isengard buildings!

We are waiting very hopefully

Hello! Are you still working with The Battle for Middle-Earth: Reforged?

Yes, they are, you should join their Discord Channel here: Discord.gg
For all the newest updates and other things.

is this downloadable anywhere?

No version of this game has been released yet.

SO how's it going? hasnt been any updates in over a year

Those Elven soldiers look gorgeous. Will there be the possibility of finding more use for the Noldor Elves outside of horse and pike? Maybe a multi weapon infantry choice like the Galadhrim?

Honestly the models are so gorgeous - I'm looking for more ways to use them lol.

Hi....you are my heroes for making this mod..I have a question...the campaigns are reworked?
Sorry for bad English..
As always, thanks for your awesome work.

Single & Multiplayer
Tags
Embed Buttons
Link to The Battle for Middle-Earth: Reforged by selecting a button and using the embed code provided more...

The Dwarf Holds Battle for Middle-earth