Hi I am Syphothis, I have been using Moddb for well over 2 years and I am obsessed with HL2 and Ep2 Mods! 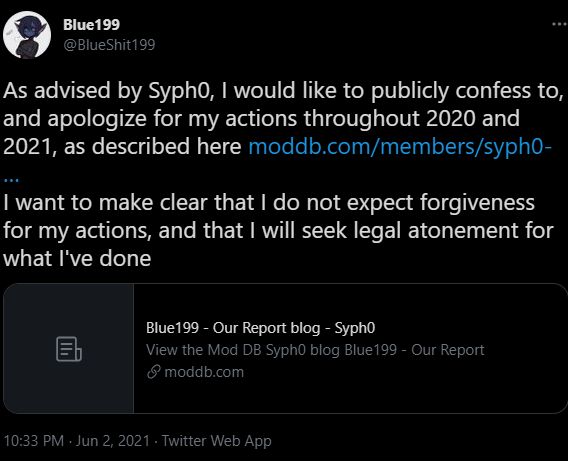 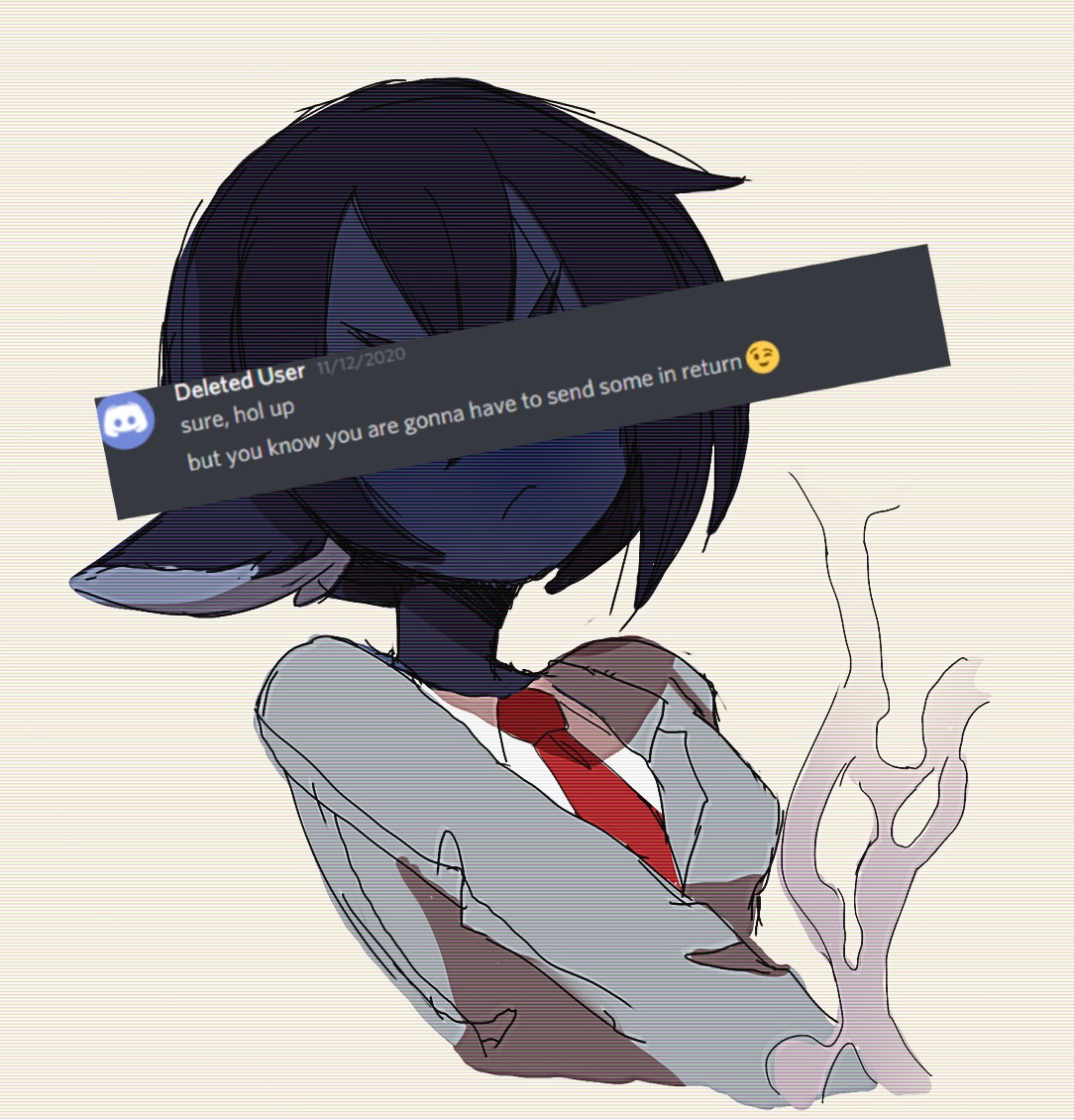 As of writing it has been just over about a month since the first-ever report on Blue199.
I’ll be honest I was pretty sure I hit a brick wall after it was published, the predator went into hiding and contacting his local law enforcement was proving to be a massive headache.

Not all hope seems to be lost though as on the 29th of May 2021 I was contacted by a user who wishes to stay anonymous who was also groomed by Blue199 from September 2019 up until his disappearance and hard bans on his social media accounts when our first report was made.

Before I get started if you haven’t already I heavily suggest having a quick read of our first report on the matter. I will be comparing the two cases within the document so it’d be best to read the first one before continuing on with this document.

Blue199 is a twenty-three year old man living in Poland, the age of consent in said country is fifteen years of age. Like I stated in the original report this does not excuse the fact that Blue199 used grooming tactics and predatory advances over the internet on a MINOR.

The last thing I want to state is that Blue made the victim have a spare account to text on but that will be explained a little later in this report.

As I stated in the intro I was contacted by an anonymous user on the 29th of May 2021.
This is a snippet of our conversation.

“He tried to actually make me date another dude…”

Now that part of the victims and Blues interaction really struck me.
Not only was Blue actively participating in E-DATING children but was also trying to get his close friends in on it all.

Later on in the conversation, the anonymous user sent me a dm from Blue199 - Now ‘deleted user’ because of the hard ban on Discord -

Luckily the ‘friend’ in question backed out once he knew of the victim's age.

What disgusts me the most is the fact that people knew, the friend in question KNEW what was going on yet did he report him? No.

I’m pretty sure I know who that said someone is and I would like them to come forward as well as any other ‘close’ friends of Blue that knew at the time.

I’m not going to expose or allude to who I believe it to be, all I ask is for them to contact me privately to help aid this investigation into Blue.

Blue199 not only sent but received nudes to and from the minor.

Blue199 used the minor's personal troubles to acquire the pornographic images from the minor. 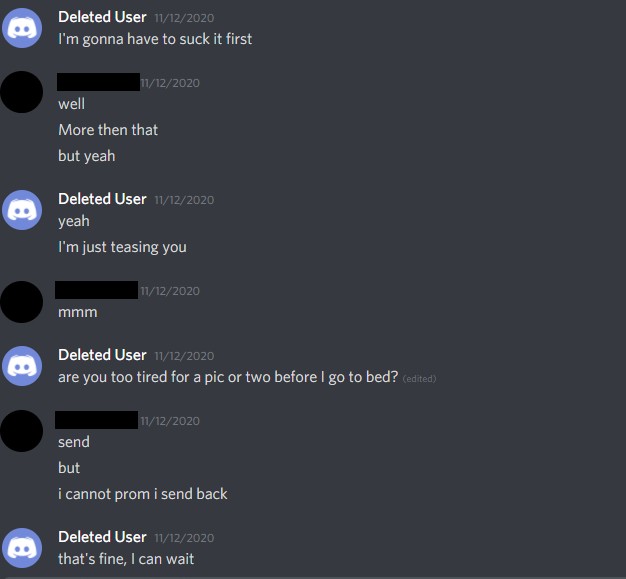 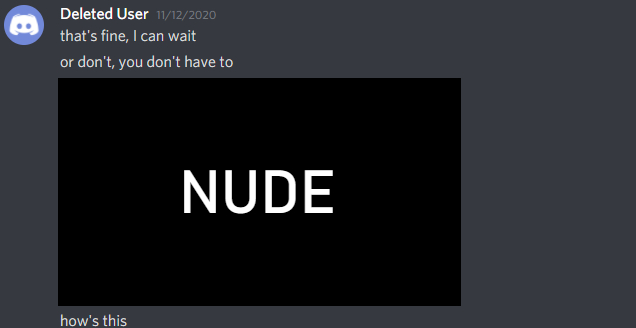 0 results found on Google Images and the penis looked pretty similar so that made me feel a lot better with the actual authenticity of all of these messages.

Telegram Account Policy: “As a part of its security features, Telegram accounts are set for self-destruction after a certain time of inactivity. A default period is set to 6 months, meaning that if you don't log into your Telegram account within that time, it will be deleted and your conversations will be gone forever.”

I think this is the part that really struck a nerve with me and is one of the bigger reasons why I decided to make a brand new document instead of dumping this all on the first report.

A lot of the nudes, ERP and any and all predatory advances are all on a deleted Telegram account.

I’m 99.99% positive that Blue199 wasn’t new to Telegram and deliberately used it to hide evidence from his friends and his IP provider.

This wasn’t the only person he was talking to and we now know this because of this new evidence provided by a victim that reached out.

Blue knew what he was doing, that’s what made me sick.

Two years that could have been prevented if people would have stepped forward and told people about Blue.

I am beyond angry about how certain people could have just turned a blind eye to all of this.

I really, really hope that these reports can help people come forward.

If Blue did anything to you that has been shown or talked about in these reports you need to know that it wasn’t your fault.

Blue199 is a monster and me and my team will stop at nothing to get the truth out against this sick, disgusting human being.

If you’ve been contacted by Blue and he has done anything remotely predatory to you please contact me on Discord: Syph0#2469.

If you’re also willing to help us contact polish authorities you can also send me a DM on Discord.

It would mean a lot.

Welcome to The Phoenix Project Software's official homepage on ModDB and IndieDB. We have no projects on IndieDB, so please view us on ModDB. We have...

Rogue Lambda the group behind 'Race-X' and 'Radiated'.

For fans of the legendary BBC series, Doctor Who, whether you like the new series with Tennant and Eccleston or the classic episodes with Hartnell and...

You're a true Waller!

I don't remember adding you to my friend list.

Pretty sure it was when I was called HACK3D or something.

Hey. I am working on a gold src mod for half-life i want to try to make a big compilation of maps that the community has made if you are interested this is the link Moddb.com

Greetings my good sir. I hear you have a mod by the name of Race-X? I had an idea for a mod of the same name and I wondered if your mod is anything like the one I planned to make, which was to be an unofficial sequel to Half-Life: Opposing Force that would most likely ignore Half-life 2 and feature a number of characters from the Gearbox expansion games and focus on the efforts to thwart a second invasion attempt by the titular insectoid antagonists.

Ohh yeah it is kinda an unofficial sequel.Bummer tell you what you can do it but there is a place in the Race-X dev team if you are interested in working as a team. Your choice.

Yeah, I think I'd be interested. Can we PM?