The first expansion to Victoria 2 focuses on American Civil War era and enhances the political and economical aspects of the game.

Carefully guide your nation from the era of absolute monarchies in the early 19th century, through expansion and colonization, to finally become a truly great power by the dawn of the 20th century.

Features:
- new starting point in 1861, allowing players to experience the US Civil War from the start
- manufacture reasons to go to war with other countries, all in the name of the great game of power
- civilize your country with various new reform paths to ultimately become equal with the western nations
- invest in building infrastructure and factories in other countries to strengthen their ties to you
- deeper political system with new national focus options and new types of reforms
- a new system of popular movements that can be appeased or suppressed, but if ignored, will become the revolutionaries of tomorrow

On Vanilla Bugs, Nobel Prizes, an Update and Hiatus

Usually when I notice a vanilla bug, the first thing I do is to check if other mods fixed it before me. I usually go to the classic and the biggest (NNM, PDM). It's a step just to see if I'm reinventing the wheel. Turns out, I didn't reinvent the wheel in none of the instances I found a vanilla bug, so this piece is more of a shout out for future modders: if you are doing a mod, or if you mod your own game just for your playthroughs, you might want to fix these things before.

What's a vanilla bug though? I call vanilla bugs flat out wrong values in the vanilla files that cause unintended behavior or simply stop intended behavior from happening. There are plenty of localization typos (that is, wrong text that doesn't affect gameplay) and that's outside the scope of this text (and I expect this text to have typos and its own problems too). Rest assured I fix them when I find them, but they don't affect the experience too much. In any case, let's start with the (relatively) harmless bugs I found. 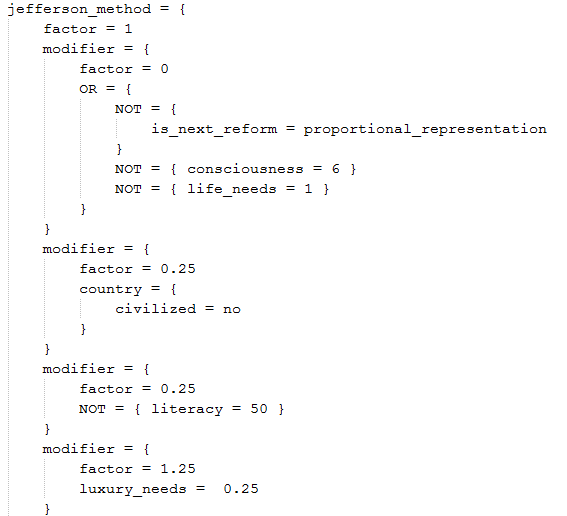 One of the common vanilla problems is when an integer is used in place of a decimal. For example, in each pop issue file, under Jefferson Method, pops won't care as much about pushing for literacy unless their literacy equals 50% or more. Or that's the original intention. Since the literacy scale goes from 0 to 1.0, 50% literacy would be represented as 0.5 in the game. A value of 50, used in vanilla, means 500% literacy, something impossible to achieve. As a result, pops would care more about passing Jefferson Method because the modifier would never go into action, as all pops are under 500% literacy.

Well, except that isn't really the case. There's something even more serious that is wrong with that pop issue that stopped pops caring about it altogether. I will talk about that late though.

In any case, under the Reactionary ideology in the same pop files, the same problem: an error where integers go and where decimals go. 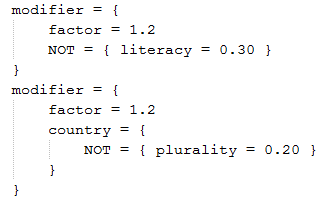 If you go over any event, you will see Plurality is counted as an integer (from 0 to 100). The intended use would be that pops in countries that don't have at least 20% plurality would be 20% more reactionary. Since it uses an integer, it means that the modifier doesn't apply to any country with over 0.2% plurality, that is, all countries. Fixing that is pretty simple, but most countries start with 25% plurality in vanilla, no matter how repressive or authoritarian, so the modifier itself wouldn't be notice or be that relevant. Still, it didn't work, not as it was intended anyway.

Still on "not very important" vanilla bug section, when selecting a country to migrate too pops will take into consideration if the country will not have any provinces with Life Rating over 30 and if these provinces have more than 10% unemployed. The pop will check if there are labourers and farmers unemployed but right when they should check for craftsmen, they check for farmers again. It means that in a state of a country that doesn't have any province over 30LR and that has labourers/farmers employed but craftsmen unemployed, the pop would still choose the country despite the massive malus to immigration that should be affecting it.

Well, that's the exception of the exception. It's a very rare case, even more so because even the deserts in the arabian peninsula have like 35 LR. Something extremely unlikely. Countries that can receive immigrants are all in the new world too and none of them are all deserts (or low LR provinces), which makes the whole modifier completely pointless. Still, a bug is a bug. I oughta change it or remove it though, as of now even in HPM where the Canadian tundras don't have 35LR the modifier is pretty pointless, since having any province over 30LR will nullify it completely. 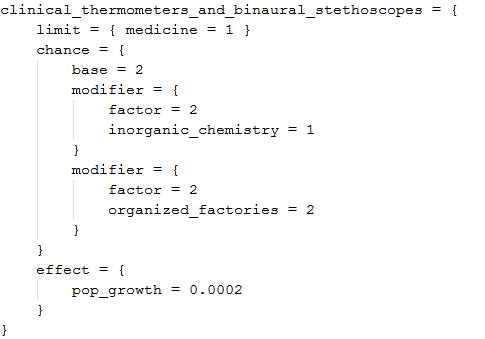 A little more serious than the last bug but still largely not important, when trying to invent clinical thermometers and binaural stethoscopes, the chance can be increased to 6% if you researched inorganic chemistry and organized factories. The problem here is that having or not a technology research is a binary switch, with 0 meaning "doesn't have" and 1 meaning "you have". Organized factories, a technology, has a value of 2, something that doesn't fly in a binary system. The game doesn't recognize that and the result is that the discovery chance can go up to 4% instead of 6%. Pretty irrelevant too, right? Well, the next one is a little more serious.

Back to the beginning

Go back to the first image. I mention there's another problem there, and the problem is right in the beginning.

is_next_reform in this context refers to the issue in scope. It stops pops from caring about a reform that can't be passed. So if the next issue is not wealth voting, that is, if the current reform is NOT wealth_weighted_voting (the issue before wealth_voting), pops won't care about wealth_voting. In Jefferson Method issue, the only way pops would care about that issue at all is if the next issue would be proportional_representation, that is, if the current issue if Jefferson Method. The end result is that no pop will ever care about pushing for Jefferson Method and no pop will make a movement to change that unless the current voting system is already jefferson method, in that case, they may push to change to proportional representation. Countries ran by the AI will never change their voting system unless it already is jefferson method, since the AI avoids or completely ignores reforms without a movement backing it up. So you basically have issues taking up processing power and not doing anything at all.

Lastly, Nobel Prizes. You probably saw the events for them several times. Simple event, doesn't say much, same image, gives you 10 prestige. After getting a few, they are gone forever. Paradox actually has a full Nobel Prize system - each nobel prize category has 35 events, even if they are all copypasted and basically say the same thing and show the same thing. However, due to how they were created, they all contain an error that stops 29 of 35 events for each category to fire. There are total 175 events spread through 5 nobel prize categories. From these, 30 events work while 145 don't, for a total of 1450 prestige that is never spread around besides the wasted processing power. 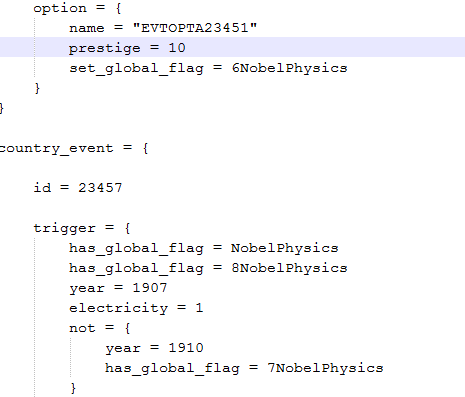 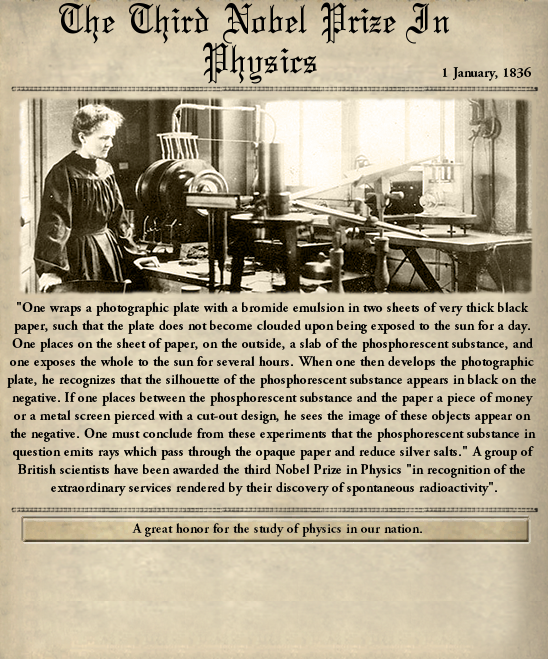 These are all that I can remember. On another note, I'm changing the nobel prizes a little bit too. Physics nobels will be more common in GPs with high literacy and with lots of pops, to avoid strange circumstances. The events also add a country flag to indicate who got what nobel so in the future a tool like the the V2 save game economy analyzer can be modified to count nobels per country (this already can be done manually). For now only the physics nobel were changed, and I added custom images and descriptions for all physics nobel as well to avoid the same event every year and make it interesting. I still need to develop a way so some years the nobel might not be handed out, like it happened IRL, but in a way that it doesn't screws up the event chain.

In any case, that's it for now. The new (old, actually. I had this build for a time, didn't have the time to upload it here) version of the mod should be up already, the changelog will be in the moddb download page. The next version will take a while as I finish some IRL stuff. I don't think it will take too long though. There's a few messages and comments for me to see too. Hang on, I will get to it and I will reply.

The NNM/PDM Unequal Treaty/Treaty Port system creates some problems. Mainly, you can't have more than one Treaty Port in the same state, it's not really...

The Making of Literate Societies

The literacy system in V2 is an improvement over V1 since literacy is not a national average only. However, much of its potential is wasted because literacy...

The v0.3.0 cycle should focus on fixing the vanilla map. I don't want to make big changes but I want to improve the map, so there will be a few changes...

Sorry for the hiatus, but IRL work is taking most of my time. The next version might take a while because of that, but in the meantime the latest version...

Content: Yugoslavia can now integrate and accept the Romanians and Greeks A Yugoslavia formed by a nation other than Bulgaria has access to the 'Bulgarian...

A color change mod for Victoria II, which changes the colors of most nations in the game.

Should be compatible with 1.4 saves/// The settings.txt file now will not dictate resolution - I just made the music a bit quieter. Replaced NIT > ITA...

Imagine a history more different to our owns. imagine if a glory of new nation, sieberburgen conquer all. this is mine story. Alt history mod, victoria...

I hope this doesn't end like the Sengoku series.

This is pretty cool. :D