Please find more details and up to date information about current state of development at stardeusgame.com

Long time no see! After the Kickstarter campaign has ended, I was flying under the radar, but it’s about time to reestablish regular development updates. The last one was in late June, so here are the most significant changes that happened in the last 3 months of development. 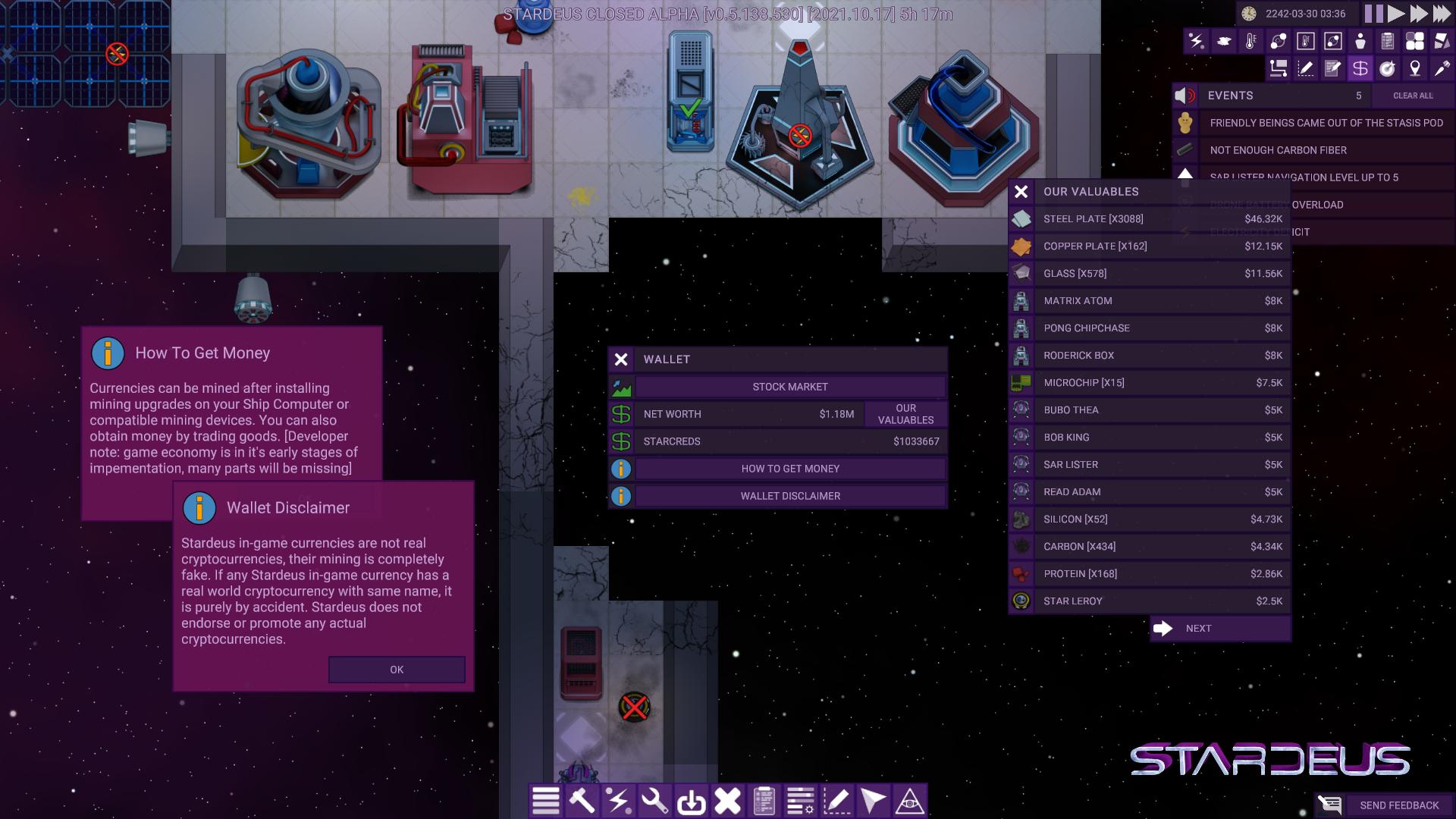 This was the first Kickstarter stretch goal, and I started working on it as soon as it was reached. The whole thing is far from finished yet, but there is already a whole lot in there. 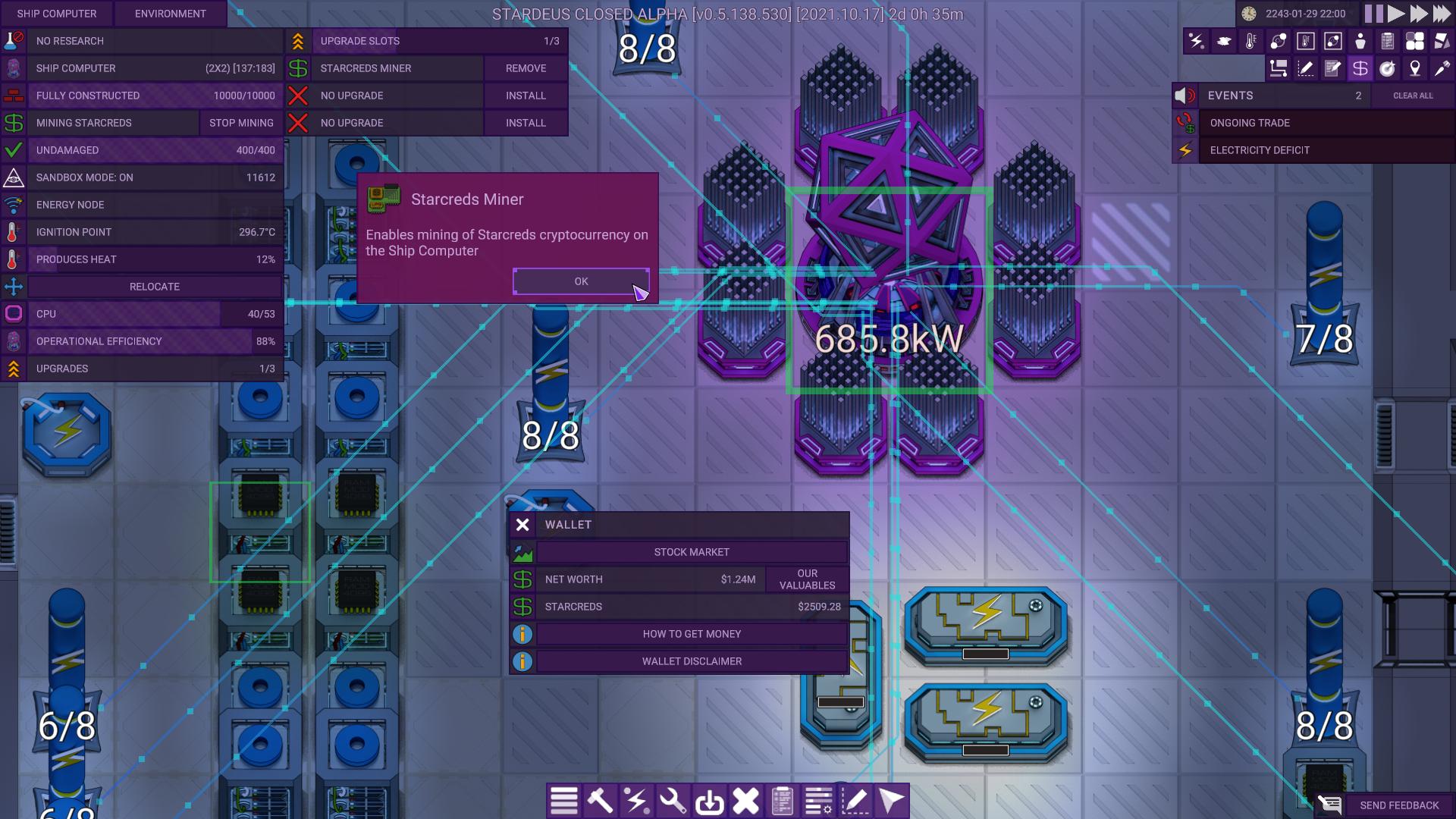 To have an economy, we need money. Starcreds is going to be the main in-game currency that can be exchanged for goods and services. It is a crypto currency, so you can install a special miner upgrade (more on upgrades later) on your Ship Computer, and mine Starcreds, basically exchanging electricity into money over time. (Disclaimer: the in-game crypto currency has nothing to do with actual blockchain based crypto currencies or their mining, it is completely fictional) 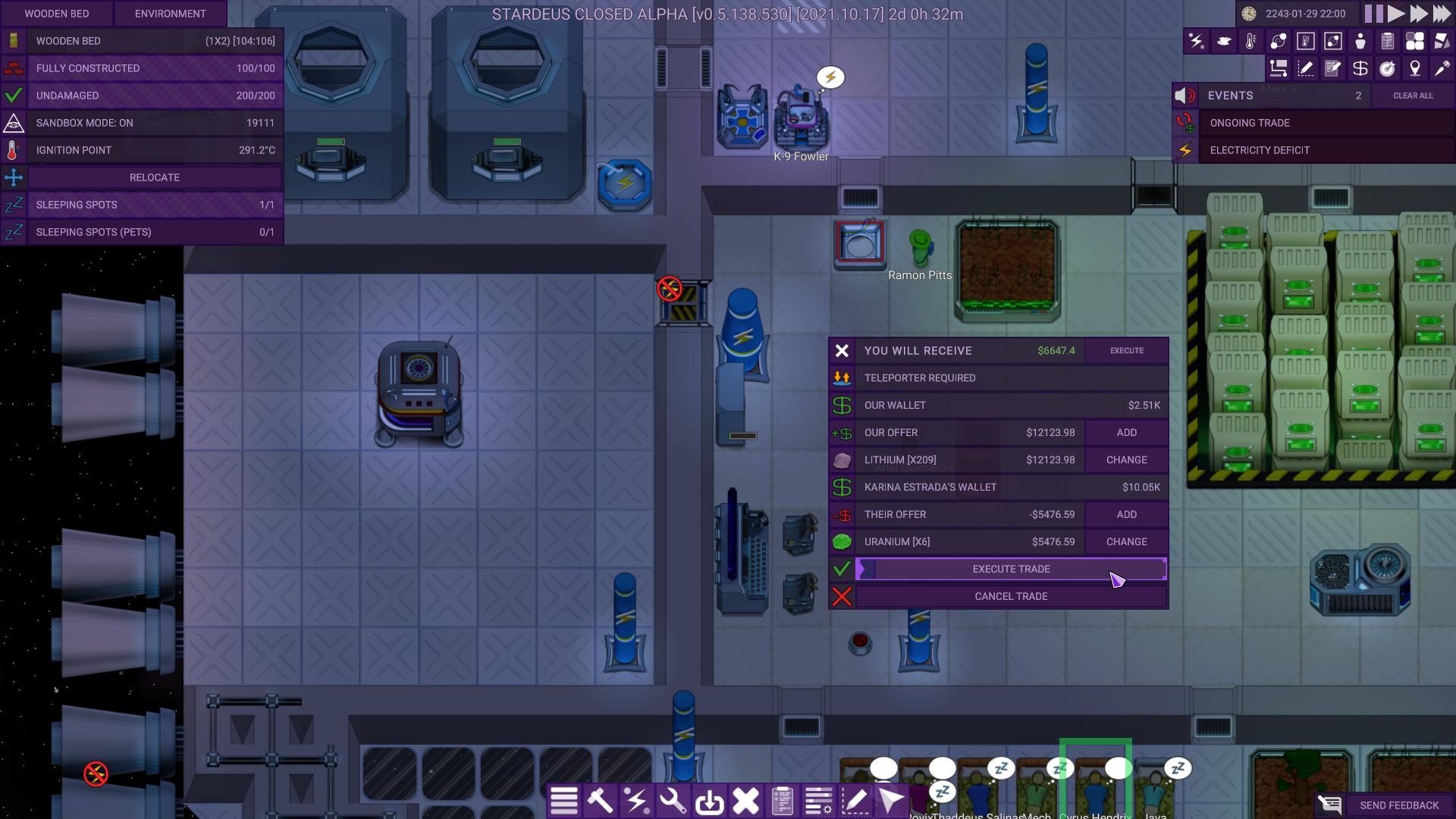 Money wouldn’t be fun to have if you cannot spend it anywhere. Therefore we now have independent Merchant spaceships and stasis pods that can visit you from time to time and offer a trade. Merchants have different types, you can encounter an ore trader, a slaver, a generic merchant that will have a variety of goods, a robot merchant that will buy or sell only worker bots, etc. New merchant types are easy to add through configuration in mods.

You can both buy and sell goods when trading with merchants, so if you’re very short on copper plates, but have a ton of titanium ones, you can stumble upon a merchant that will be happy to exchange them for you. For a little markup, of course. 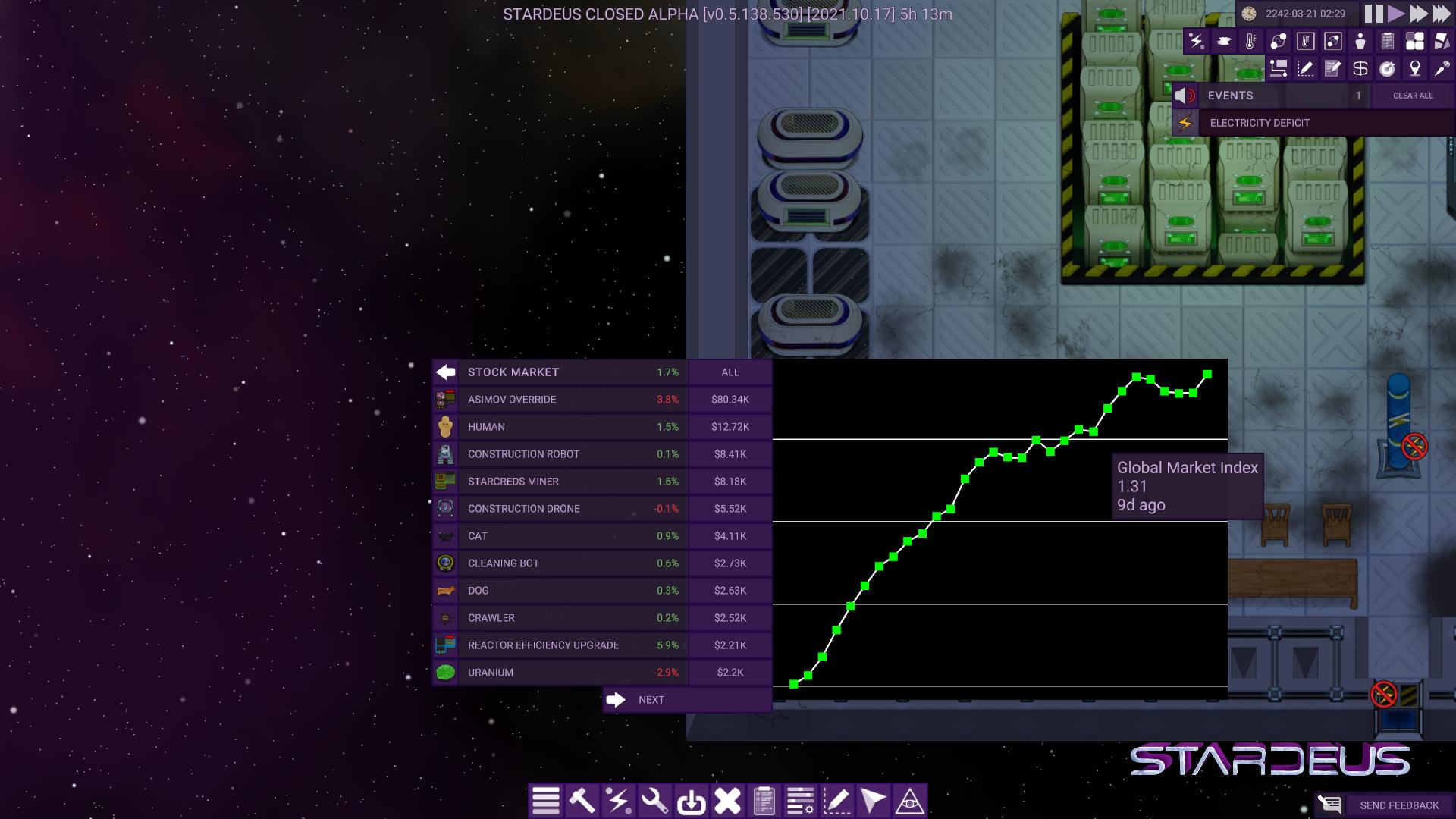 The Economy system is not limited to simple trading. There is a fairly complex global economy simulation that determines daily price changes for anything that can be sold or bought. It is driven by a set of algorithms that simulate actual market situations, with long term and short term effects, correlations, surges and recessions, bull and bear markets. Here’s how three in-game years worth of price changes can look:

This makes it possible to time the market when doing trades with merchants, selling off parts of your inventory when prices are high, and buying when there’s an ongoing recession.

Trading in the Stock Market 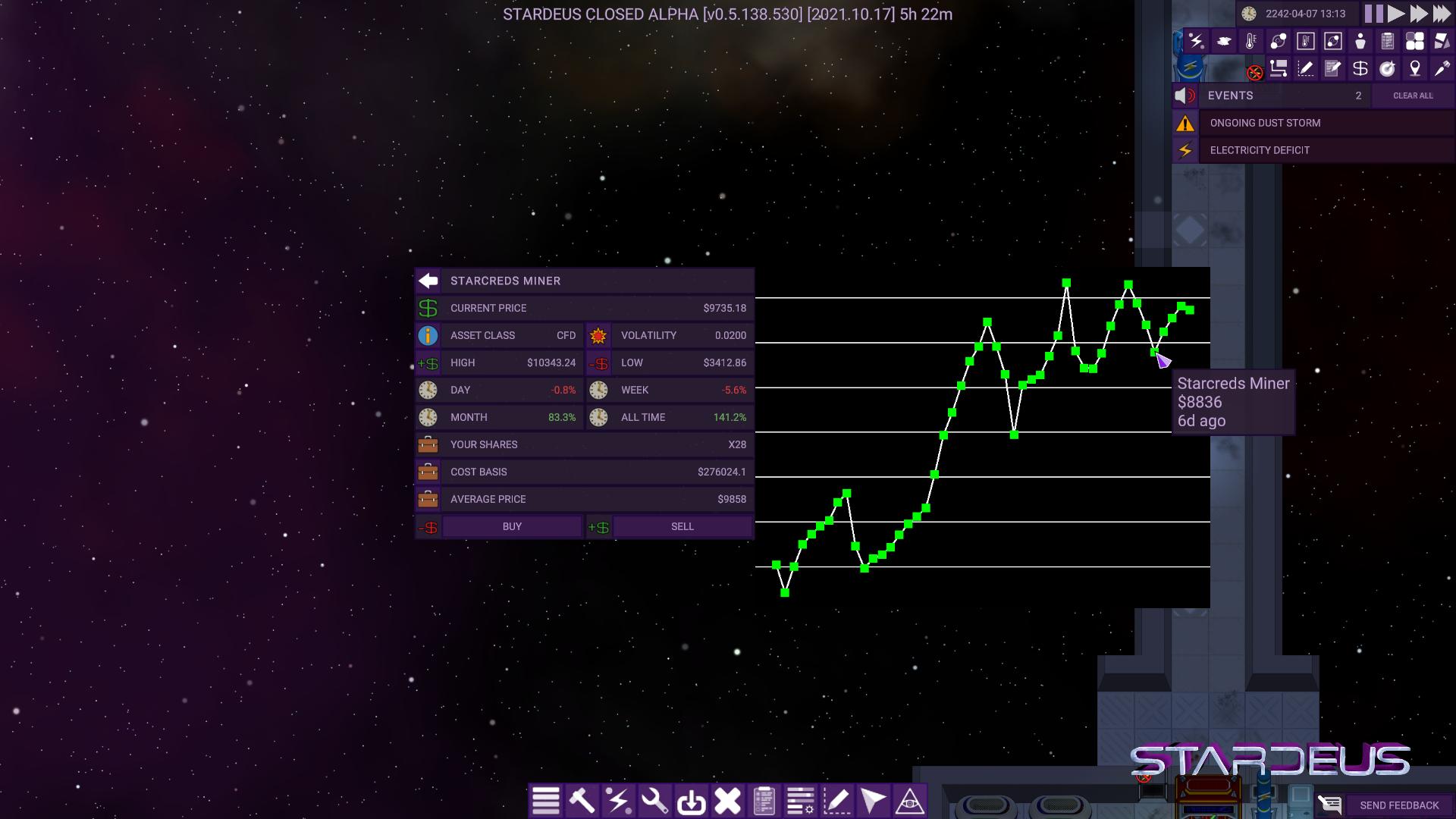 In addition to controlling the global prices for merchant items, the Stock Market offers a possibility to trade stocks and commodities. This means that you can buy 1000 robots without physically owning them, and then sell them a month later, hopefully with a big profit.

There is a whole separate research tree branch for economy and trade, that will let you unlock these features one by one, starting with currency mining, ending with stock market trade terminal and advanced market insights.

There will be much more, in the long term we will likely have more in-depth stock market simulation with advanced instruments, like short selling and options trading. 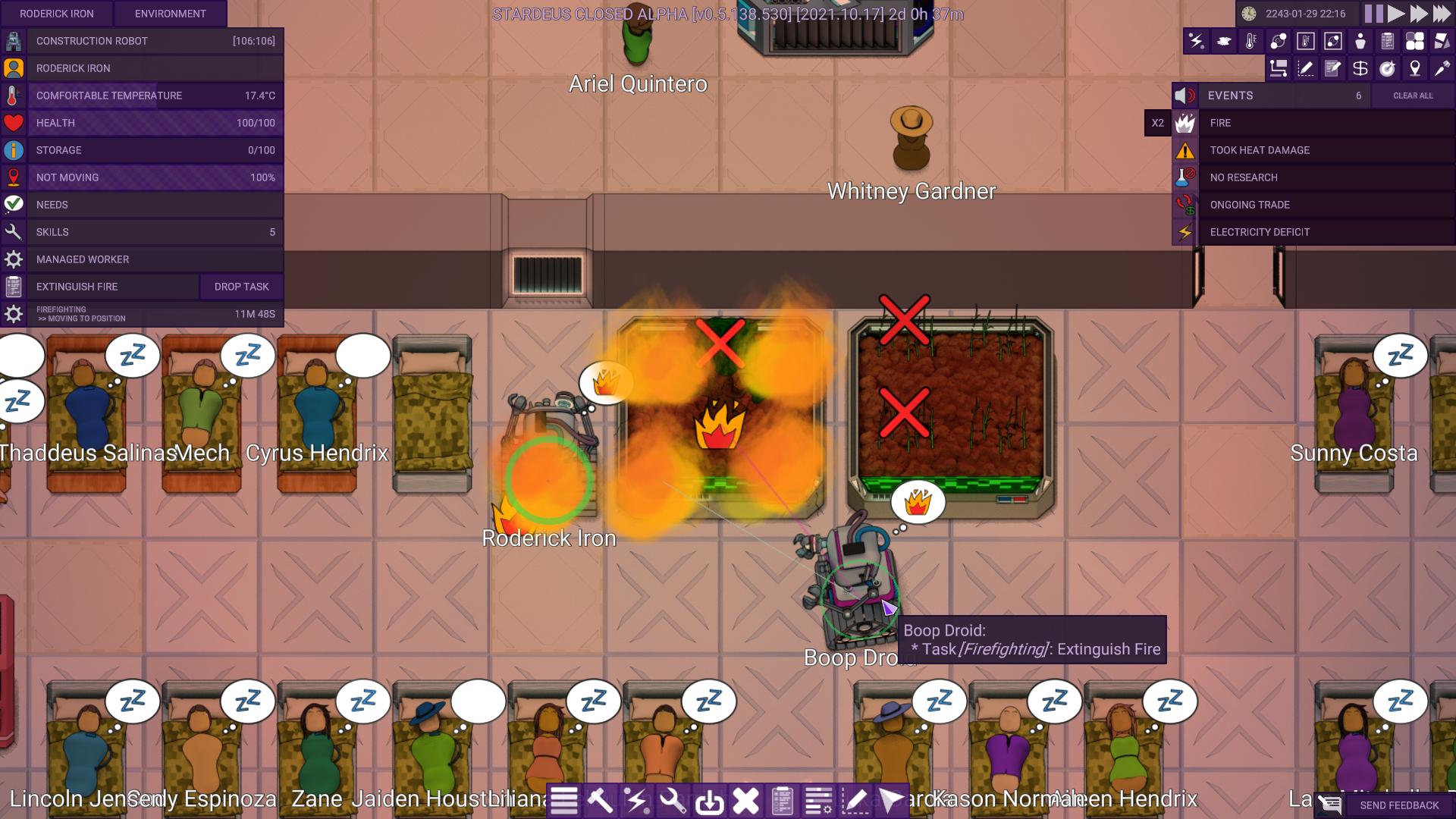 Fire was a major pain point, when it flamed up, you had to remove floors or walls to vent the area, and that was often quite inconvenient, especially if it happened in the living quarters.
Now we have the highly requested firefighting, where your robots and drones will actively try to extinguish fire when it happens. 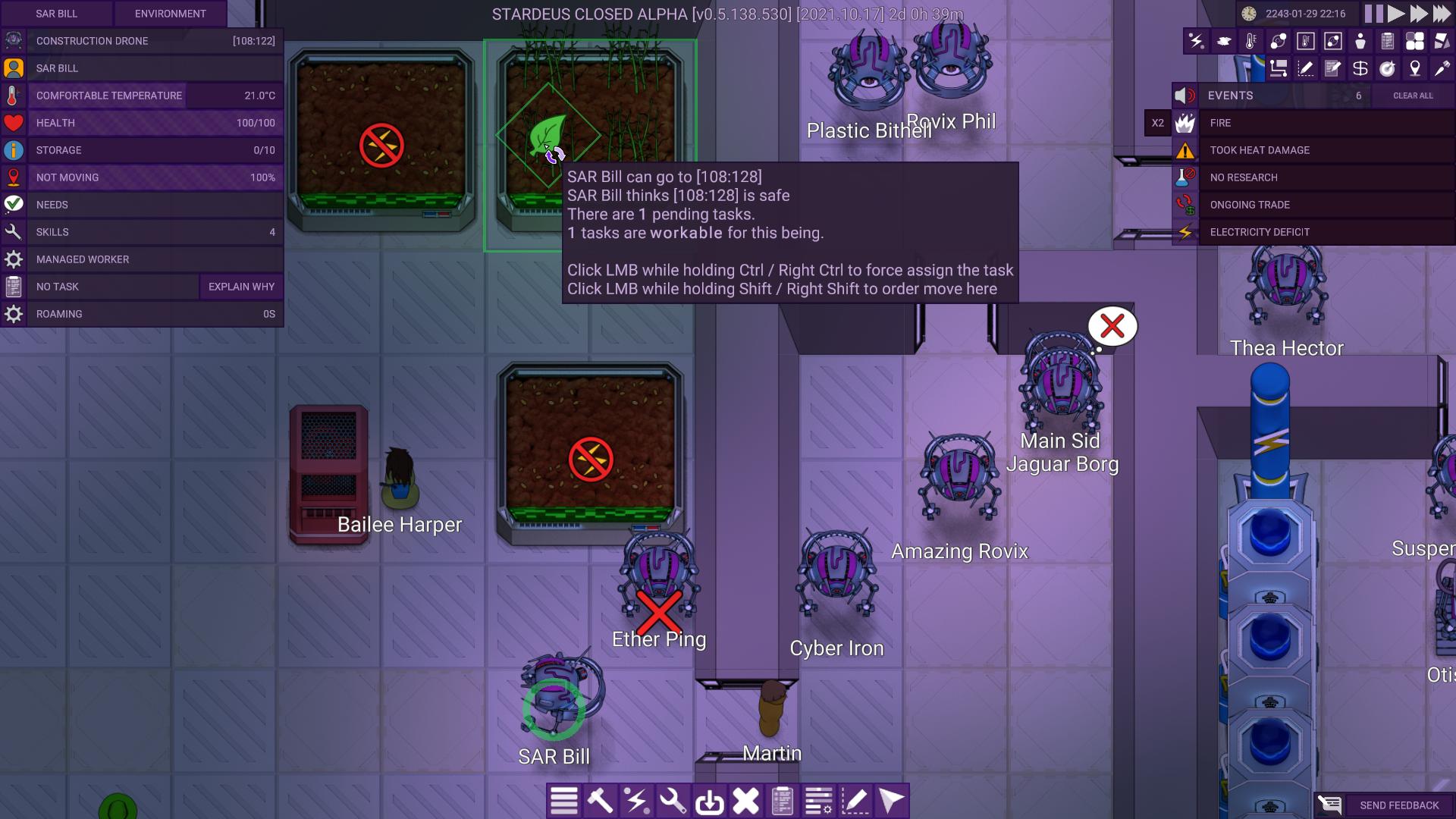 Previously there was no way to force robots to perform a particular task, or just make them move somewhere. Now we can CTRL + click on an item that has a pending task, and the selected worker will start working on it ASAP. With Shift + click you can order selected workers to go to a specific location. This works great in combination with firefighting, when you may want to nudge your workers to extinguish particular flames first.

Note that you still cannot control human colonists, but that may change in future, when we will have brain implants. 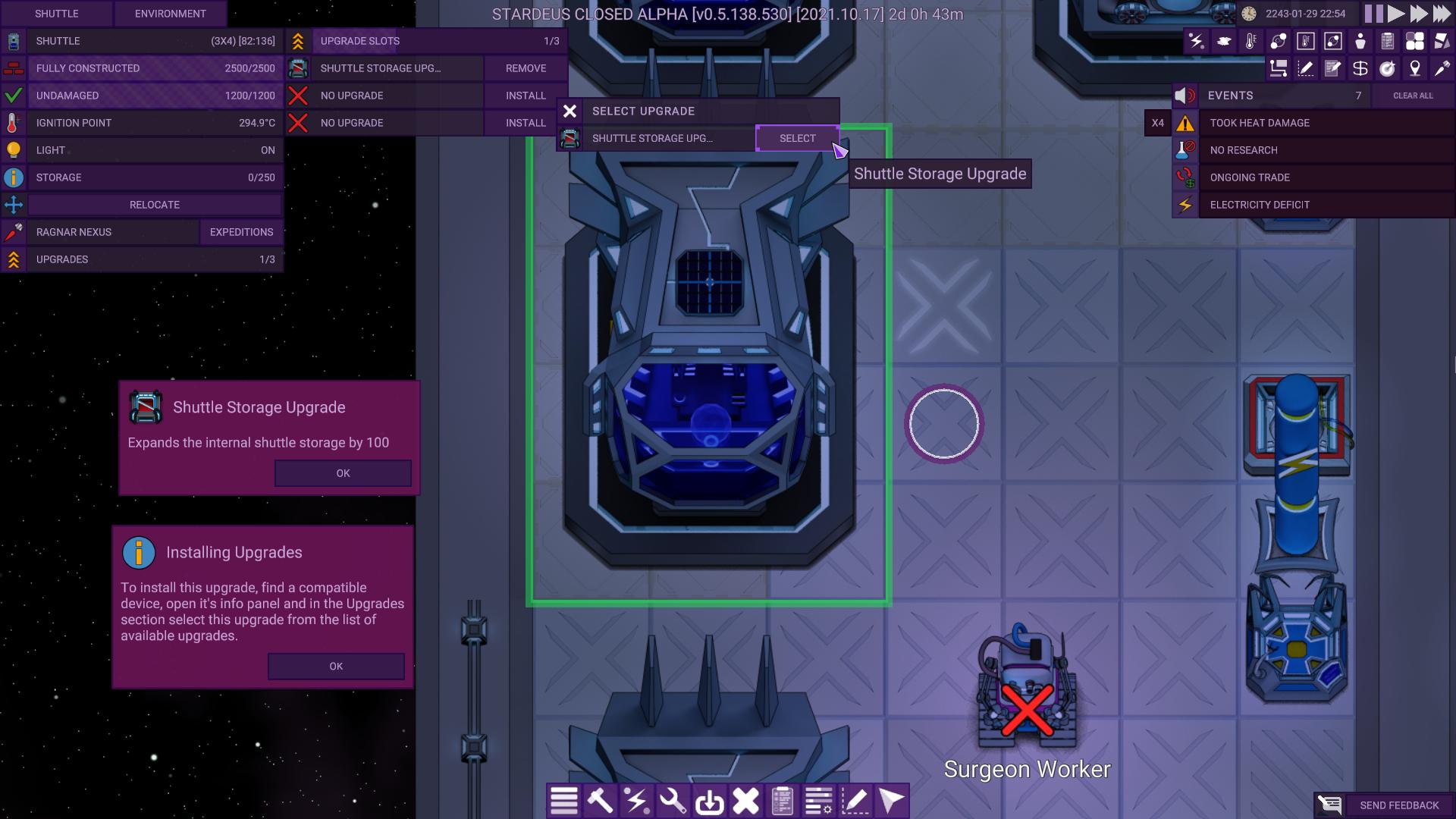 There is a new in-game system that enables creating installable upgrades for virtually anything. The upgrade can unlock new functions, improve device’s performance, etc. Upgrades can be stackable and combinable. Here are a few examples that are already implemented: 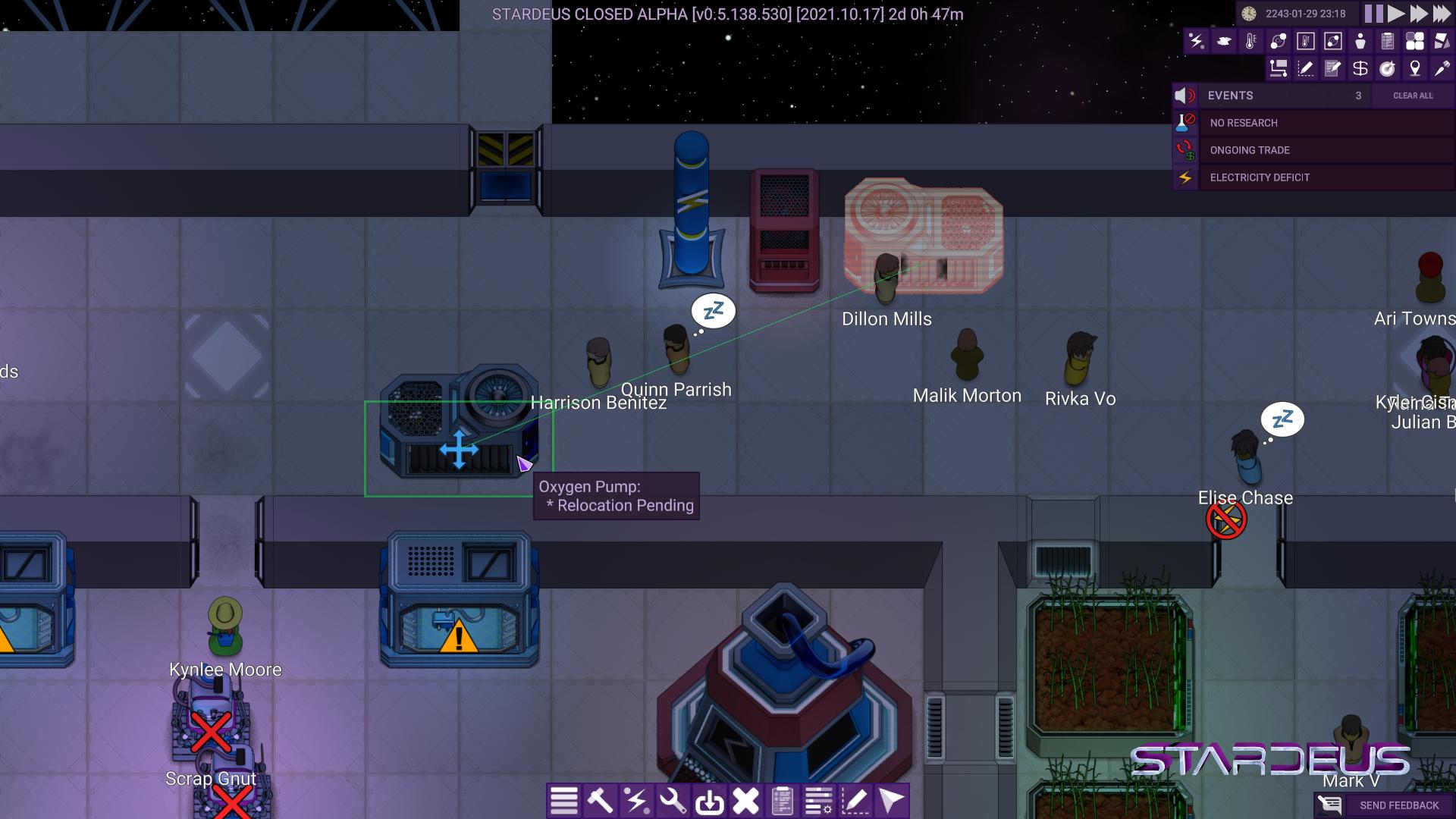 This was a highly requested feature, so I caved in and implemented it. You can now relocate objects and devices anywhere you want, including the Ship Computer and Stasis Array. However, relocating these two will require a fairly high Construction skill level. 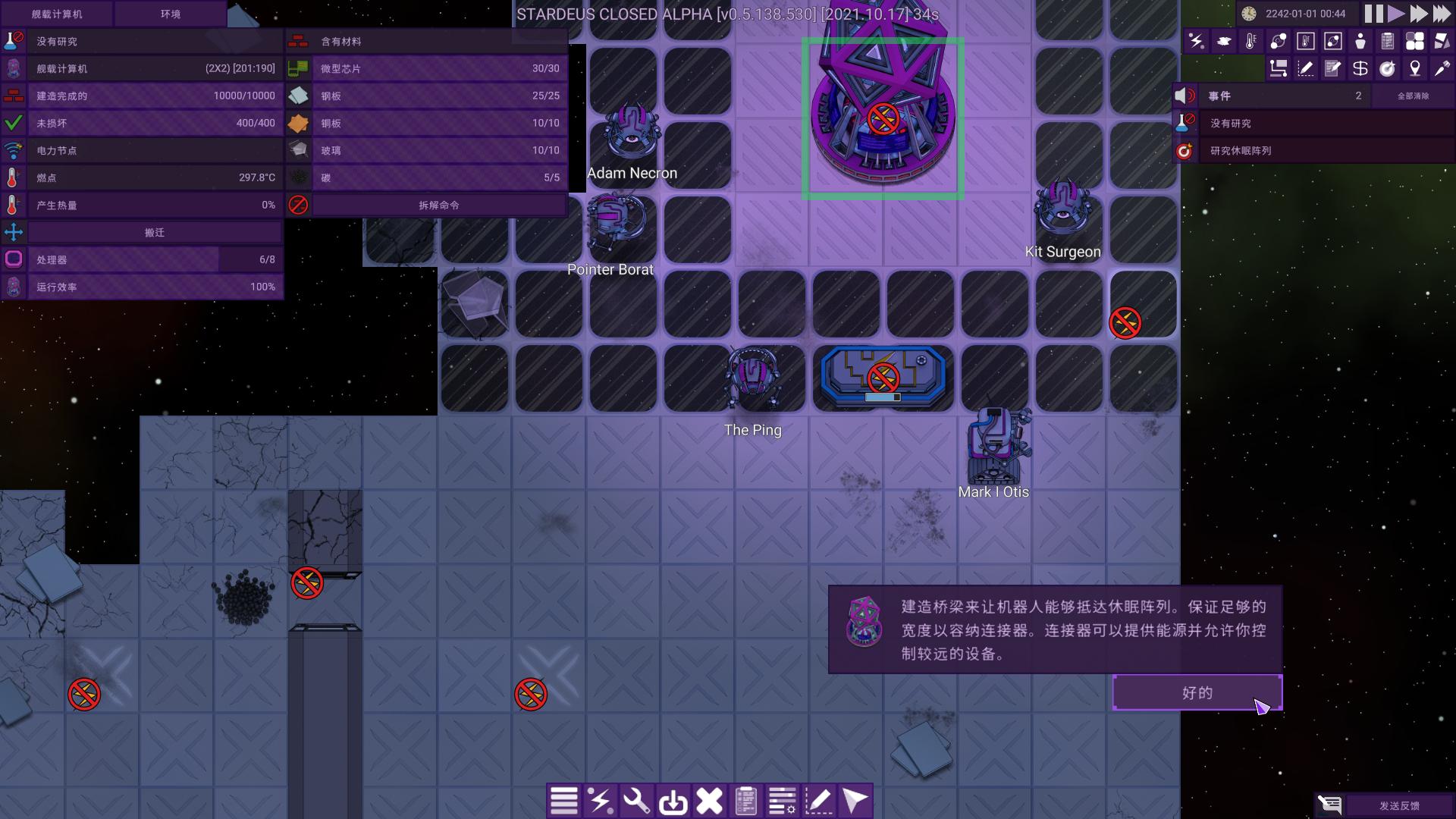 Our wonderful community members have translated Stardeus into 5 languages: Chinese, German, French, Czech and Portuguese (Brazil). Thank you! If you would like to contribute to translating Stardeus, all the information is in this public GitHub repository. 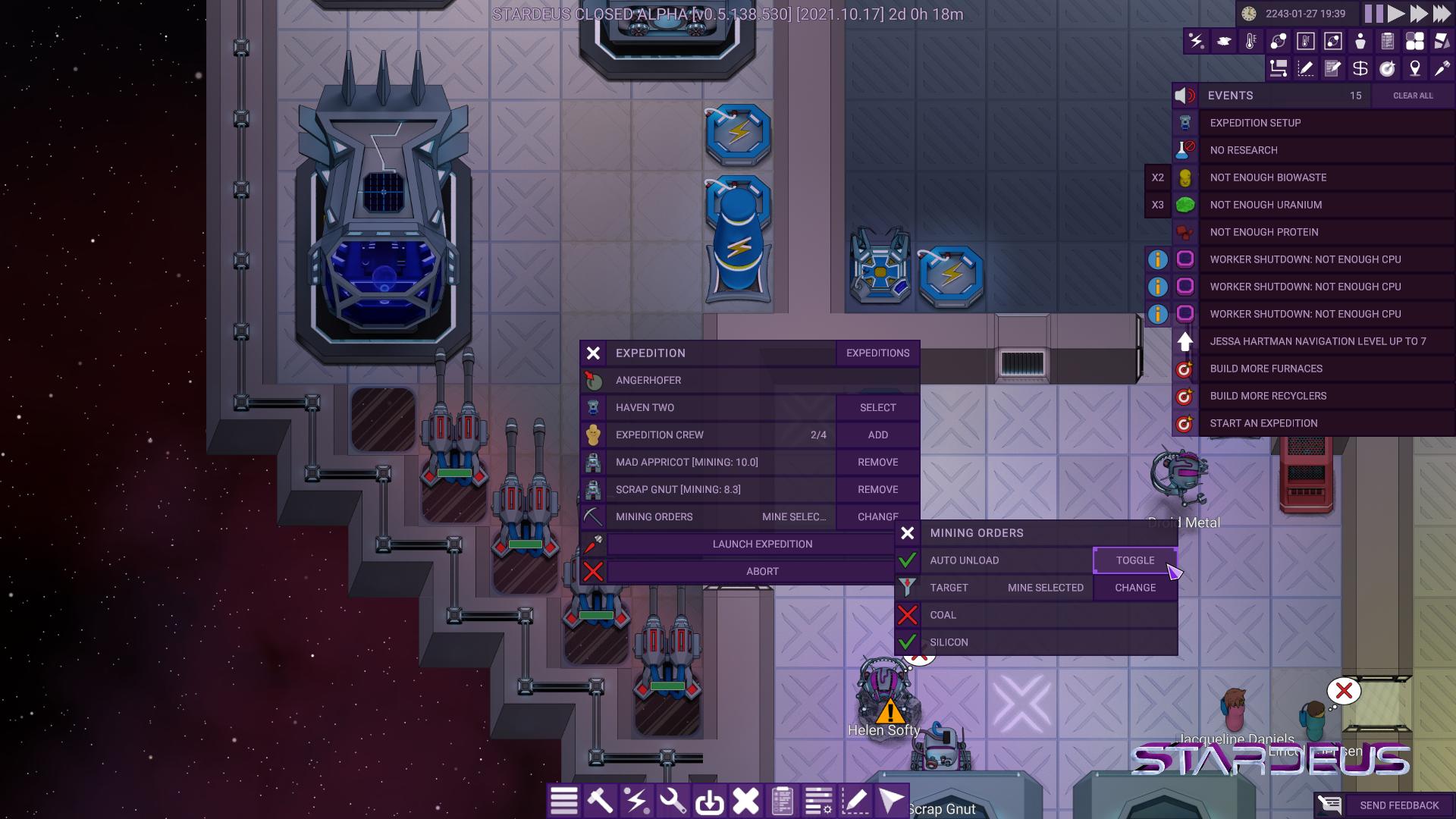 Space expeditions were completely reworked. Initial implementation had a terrible UI with tons of annoying pop ups asking to micromanage every single step of every expedition. The new version will let you automate the expedition as much as possible. Want to mine only iron and copper, and automatically unload the shuttle back on your ship when it’s storage is full without launching a new expedition every time it returns? Now you can. 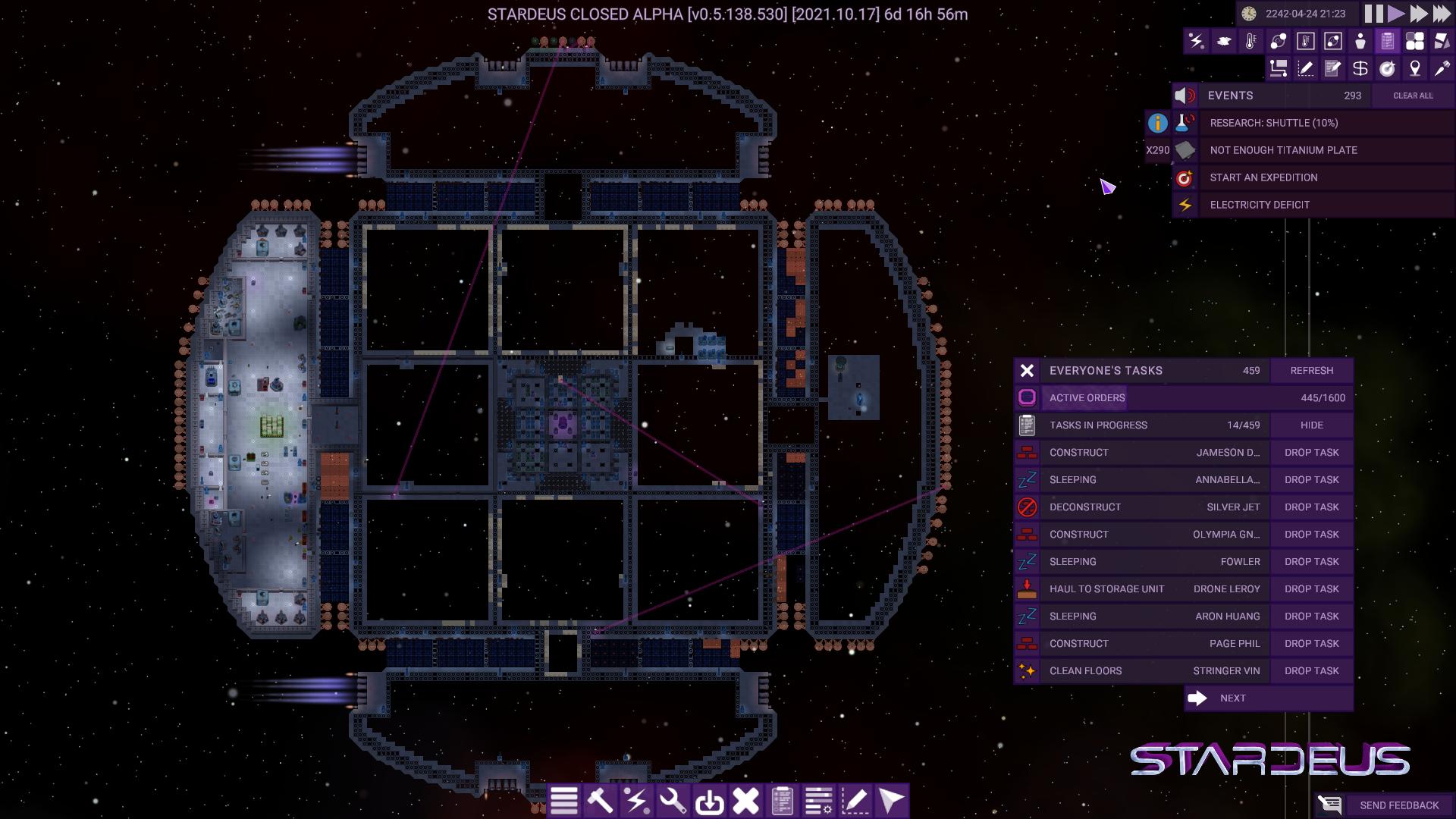 Performance is very very important for me. A game like Stardeus has to run smoothly even with a huge amount of things happening. The game is being tested for performance bottlenecks on big saves, some of them having 100+ hours of play time, hundreds of colonists, and thousands of devices in complex electricity grids. Recently there were a couple of major CPU, GPU and RAM usage optimizations that made the game much faster. This should be especially noticeable with low tier hardware. 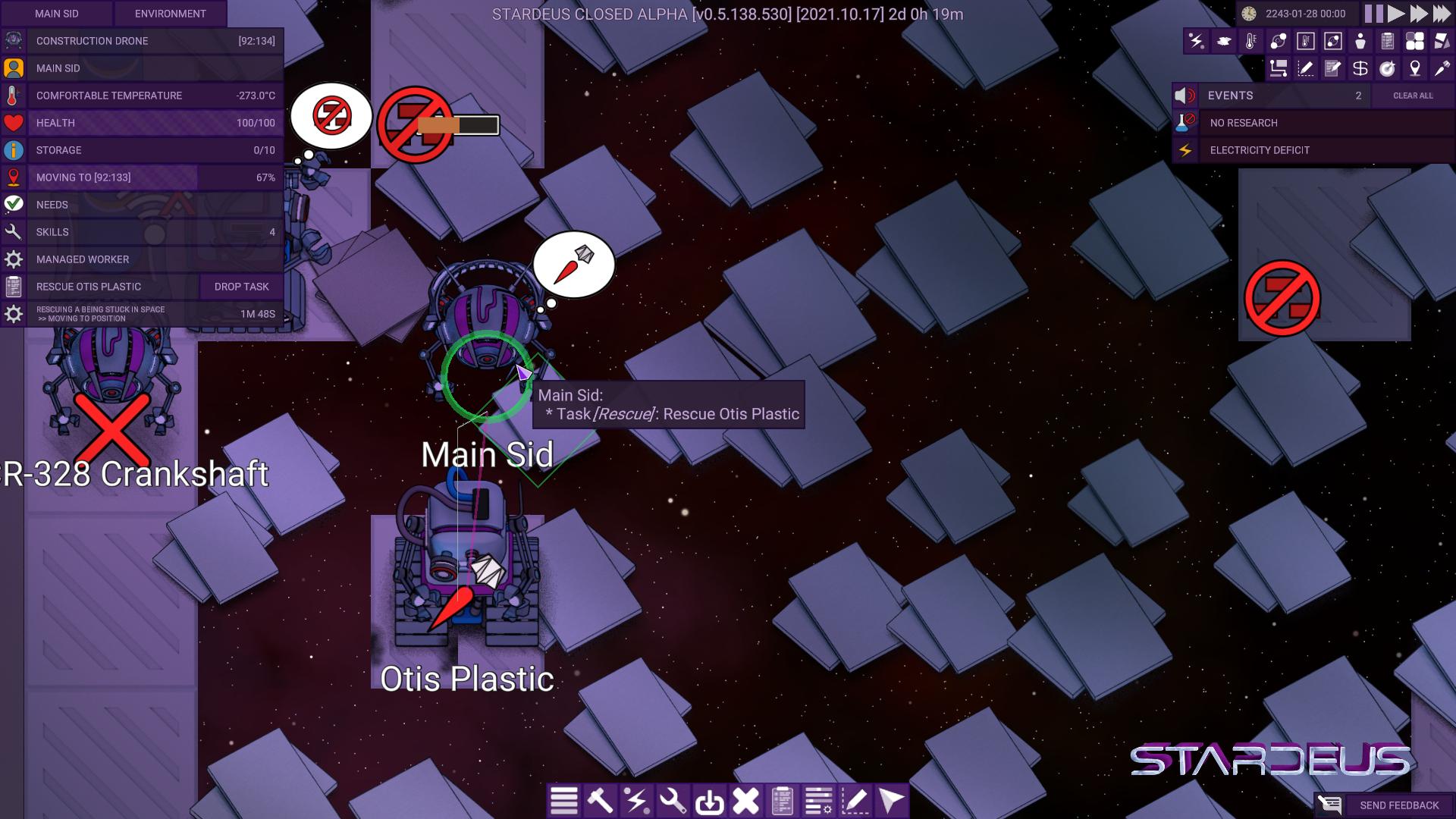 This is a small change, but it adds a lot of value, so I decided to include it in the list. Previously Robots would tend to get stuck in space if they were involved in deconstructing floors, therefore I “solved” it by making robots ignore floor deconstruction tasks. This was obviously not the right way to do it, so now we have a rescue mechanic. A robot that finds itself in space will request a lift from a friendly drone that will carry it to the nearest stable ground. You can also order rescue manually, in case the robot finds itself on a small patch of floors but without a way to reach the main ship. In addition, you can shutdown a worker and order relocating it anywhere you want. That allows you to shut down the robot very early in the game and move it near the Stasis Array, if you want to start building more complex devices there sooner. 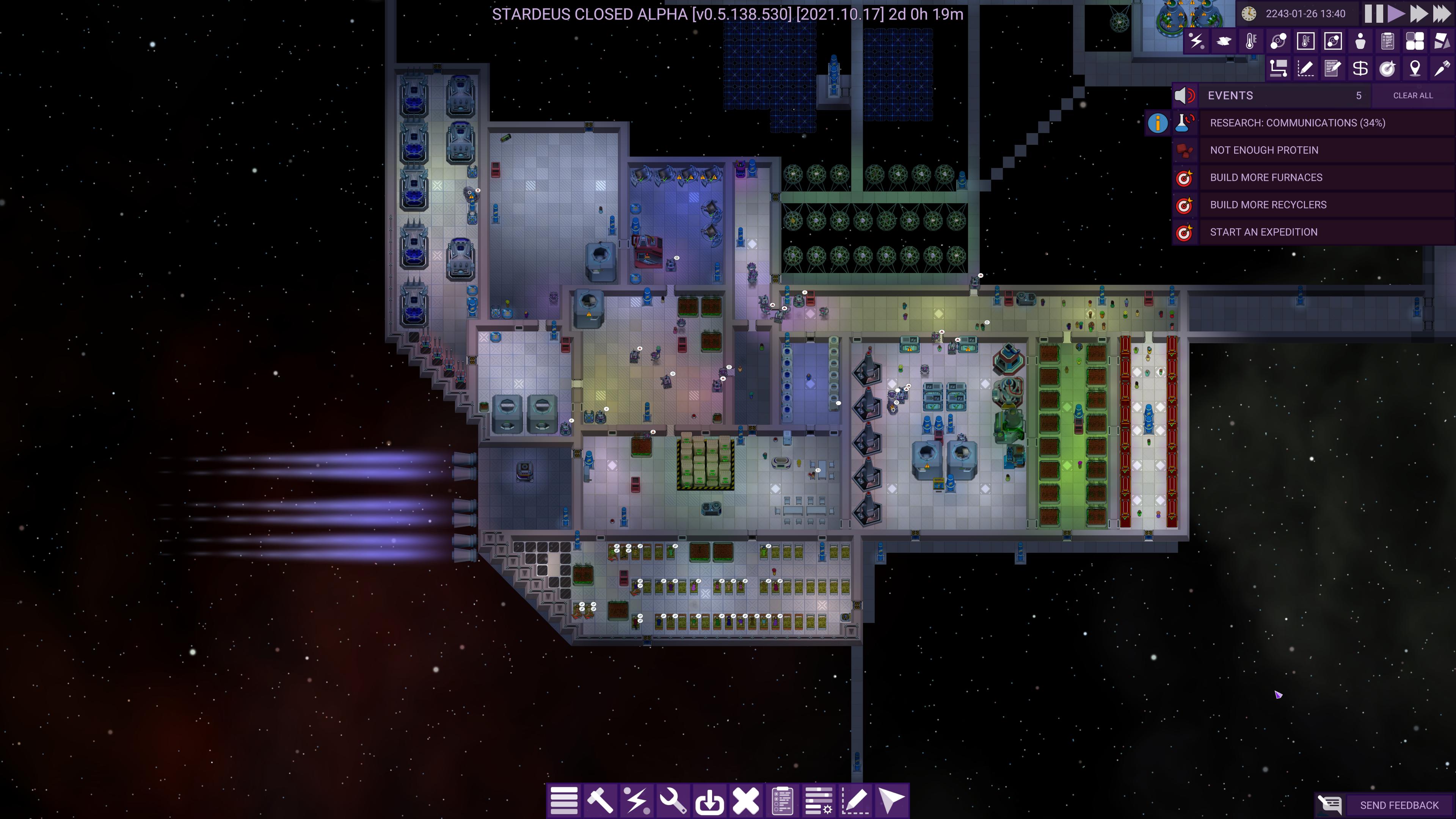 The original space background was arguably better looking, but it was very heavy on the GPU, and had a few fundamental issues that I was not able to solve. It was based on a fractal generation shader, which means I had almost no control of what things would look like, and it was impossible to make it infinitely scroll without running into floating point precision problems. It also had a very heavy shimmering effect with thousands of one pixel stars popping in and out when the view was moving. The new space background is based on Unity particle systems, I have much more control over it, and it will be possible to add particular objects to the background, i.e. a planet when you are above one. It still needs work, but I am going to do incremental small changes to make it look much better over time.

In addition to what I already covered, there’s tons of new content, bug fixes, game balance, UI/UX and QOL changes. You can read through the full changelog if you are curious about the details. You can also find the real time changelog in #stardeus-updates channel on Stardeus Discord. It updates automatically when new alpha builds are published on Steam.

As always, I am developing Stardeus live on Twitch, you're always welcome to visit! If you are in a different time zone, you can still see the stream recordings for two weeks back.

Stardeus had around 300 changes since the last update one month ago. This dev update will give you a quick overview of the most notable changes.

Stardeus, a space exploration base building colony management sim, had over 200 changes in one month since the last update. Let's take a look at the most...