The third and final expansion to the genre-defining and critically-acclaimed RTS, Dawn of War. In Soulstorm, two new armies are introduced – Sisters of Battle and Dark Eldar - raising the total number of playable armies to nine. The revolutionary meta-game that was first introduced in Dark Crusade is further expanded to an interplanetary scale, allowing players to battle across the star system.

Hello, it's been a while since I have said anything here or have made any announcement (I'll talk about it later), but I would just like to officially announce that the mod is not dead for those folks critically asking. In fact, I'd like to announce that progress may pick back up in June/July.

We are at our "slumber state" due to the entire team having personal life issues or are just busy, but, we do plan on making more modifications in the future and just wanted folks to know that. :) Meanwhile, enjoy your time here and be sure to make yourself at home to our discord server and also welcome all newcomers.

However be assured that we're not lacking content to implement but rather the manpower to actually bring everything into a good shape that can be actually released to the public in the form of patch v1.9.
This way I want to take the opportunity to call for team reinforcements as we're always looking for possible new teammembers to help us speed up the development process. Consider contacting me, Cosmocrat, if one of the below is true for you.

If mod developing is not your kind of game we have some eye candy for you nonetheless. Below you can find some teaser images showcasing some outstanding 2D and 3D rework, created by the magnificient Eranthis, the Author of the The Eranthis Project.

The first picture shows a new iteration of the Sisters of Battle - Battle Sister model, as the old version was not quite pleasing the art standard of Eranthis, along with Space Marine assets being worked on the side. Each faction will be getting the same treatment one unit at a time. 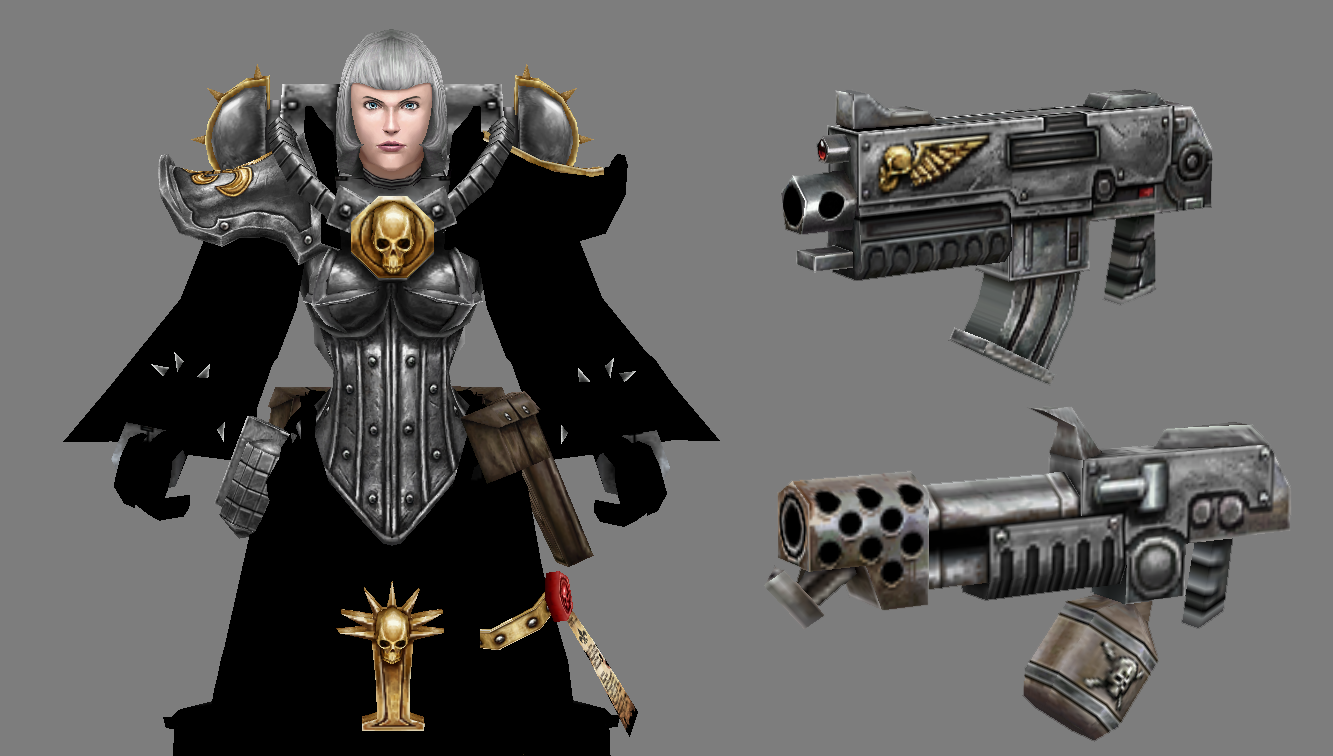 Below picture shows the adjustments made to the St. Huldrich Causeway map and the City of Stormgrad map (still in the works) in order to crank up it's prettiness by 420% and playability, which is pretty dank!

Last but not least Eranthis covered a section of DoW modding that only few if not anybody has tinkered with yet: Skyboxes! Several new high definition skyboxes on a lot of new and vanilla DoW maps surely add a new level of prettyness and immersion with minimal performance impact, great job! Let the pictures below convince you if my words were not enough.

This wraps up our little news post and we hope that we were somewhat able to restore your squad morale! Until next time.

Here you have the opportunity to win the package: Warhammer 40,000: Dawn of War Master Collectiont

Imperial Guard on the way

This time I will upload a bunch of stuff for the Imperial guard. New unit models, some mini mods, and other fun stuff.

I want to know if you guys have any problems or complaints about the maps.

First release! The UI is still yet to be edited but it will be soon ;) enjoy

Unzip to the root folder with the game, and enjoy epic battles. (Does not break oregenal and does not conflict with other mods)

This is a test version, Skirmish crashes for some reason, If you want to fix it to save me the time feel free to try

Wow!!! the model of the Battle sister look outstanding and the scenery on those maps look amazing...Are you gonna have Primaris Marines?? It will be cool to incorporate the new Primaris Marines and The Primar Robust Guillman...if you read the books...he is back and many other Primarchs may come back into the Warhammer 40 k universe.

Hello, do you know if there are any faction mod in work or released about the adeptus custodes post horus era?

As a matter of fact, there is a Mod in the works based on the adeptus custodes, go to the dawn of war mods page here at moddb, and as of writing of this comment, the mod is an work in progress.

Hi guys...do anyone know were can I find a race unlocker for Soulstorm???
Please share a link if any of you know..Thanks.

LOVE IT....The last ULTIMATE APOCALYPSES VERSION IS EXCELLENT!!! Great game play...easy installer...best mod for Soulstorm no doubt ! Another Mod that kick hard is Black Templar...I love the way the Artwork on the Black Templars and all the details..easy to install to and never crash...love that one too.

If you like rts games you should play this for sure!! And also the great mods they made for it!!

If you want to see more mods for this game, go to Dawn of War and click on mods.

The one of the greatest moddable games!