Designed as a thrilling blend of role-playing and action Pirates of the Caribbean takes place in a large group of Caribbean islands during the golden age of piracy and high seas adventure. You will take command of a ship and its crew, swordfight with other captains, accept and complete daring quests, chase rumors of dangers and riches, and change allegiances amongst the colonial powers in the game. Through skill and daring, you will have the ability to obtain more power than the toughest captains in history ever dreamed possible.

You will be able to customize your captain, crew, skills, and attributes to their individual liking. During shore leave on the many fanciful islands, players can interact with townspeople and shopkeepers to replenish stores of ammo and crew, and explore the wilderness in search of adventure and treasure!

A party-based system on land and at sea allows you to hire friendly captains to form small fleets of ships for trade or battle, and your own band of adventurers when on land. Ultimately, you will be able to control your destiny by following the game story or sailing off in a search of pirate loot.

Ahoy there everyone, and a happy new year!

This one is one that was literately years in the making. It could have carried on, but there always comes a moment when you need to draw a line. So Pieter Boelen as his final act on this mod released the final version of Build 14. Which you can download here on ModDB and the PiratesAhoy! website since yesterday. The last mod update article we had shared was back in 2016, so let us take a small glance on what has been added since. If you haven’t played since you may find something new. 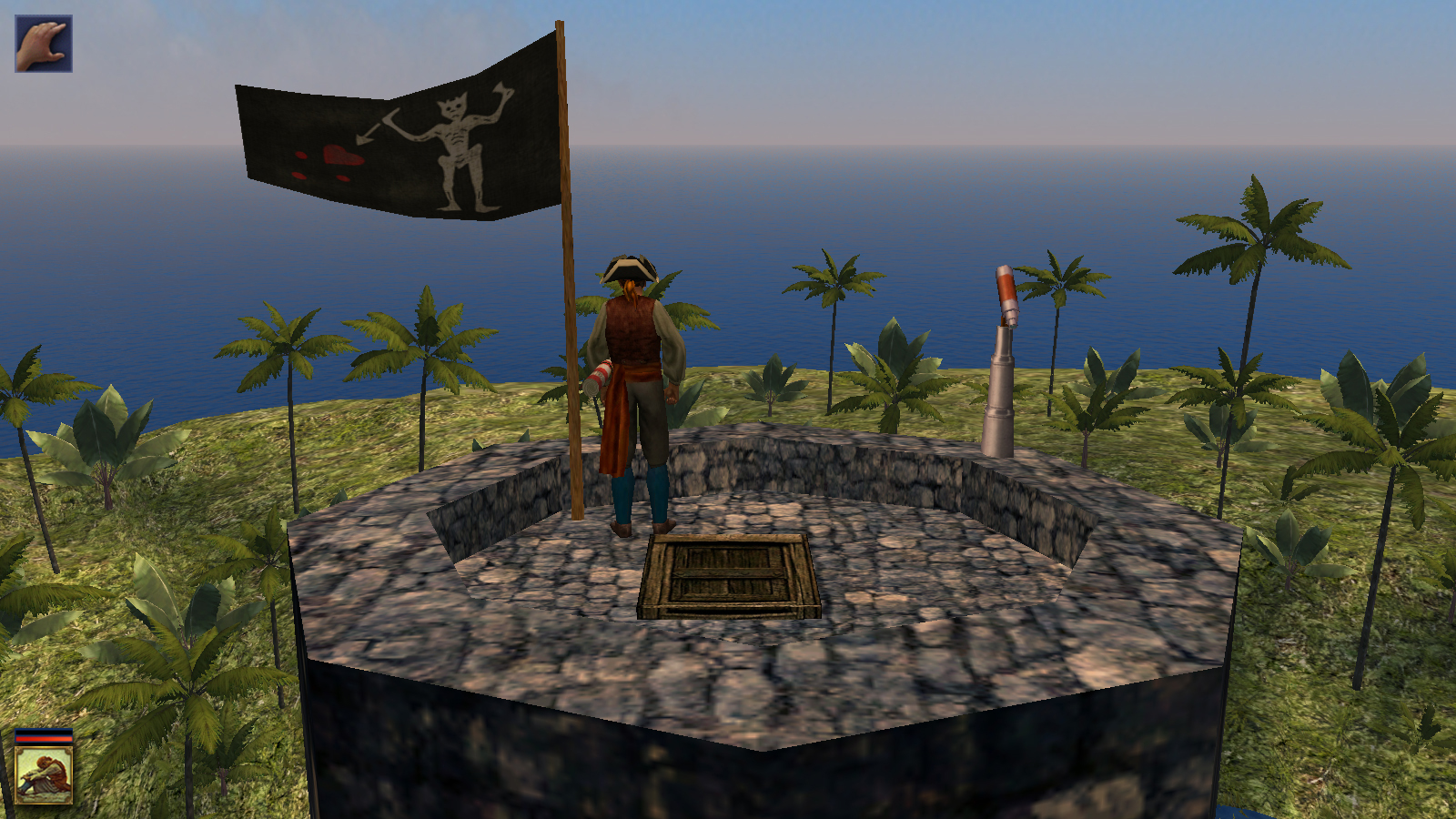 For starters there have been changes and improvements on various storylines. Grey Roger’s “Ardent” has been extended and bugs have been fixed. Same for Jack Rackham’s “Gold Bug” and “Woodes Rogers”. The latter also got a second part, which fans of the first part should check out. Another storyline that got some love is “Devlin Opera”. Which used to be classified as unfinished, but BathtubPirate fixed this by working on it. Now there should be more to it. 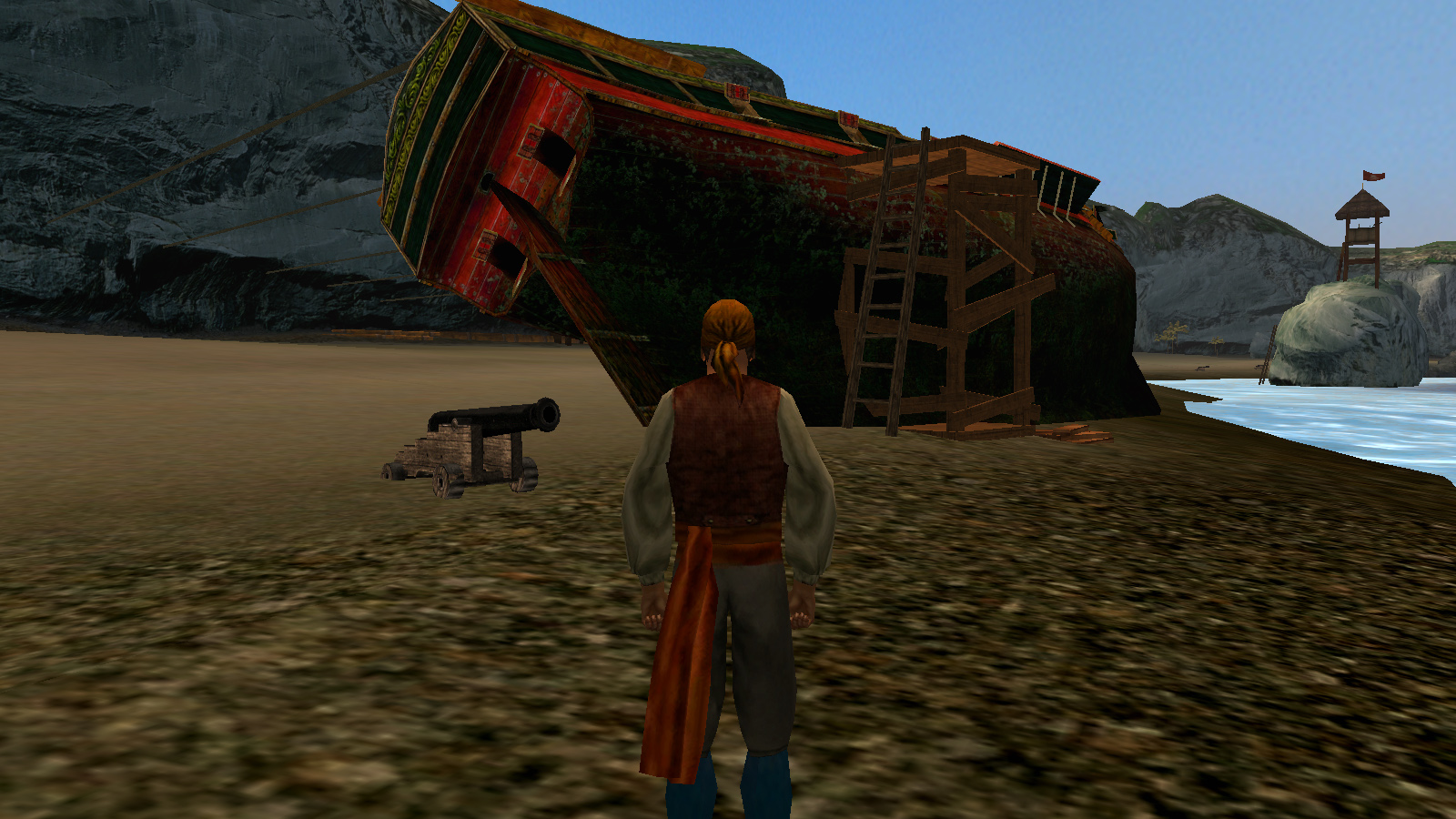 New side quests were also added. Grey Roger made "Crystal Skull", "Silver for Cartagena", and "Natividad Incident" for Horatio Hornblower (both FreePlay and storyline). While Bartolomeu o Portugues made "A Family Story" and "A French Companion" for José Joaquím Almeida. Plus there now are background profession specific “trophy quests”. So far the one for agents was made by Grey Roger, the one for engineers by Jack Rackham, and the gambler’s one by both pedrwyth and Jack Rackham.

Davy Jones, and his crew, got new character models by Karlik Nos.
And on the same topic, his ship and cabin also got new models I borrowed from Sea Dogs: To Each His Own. 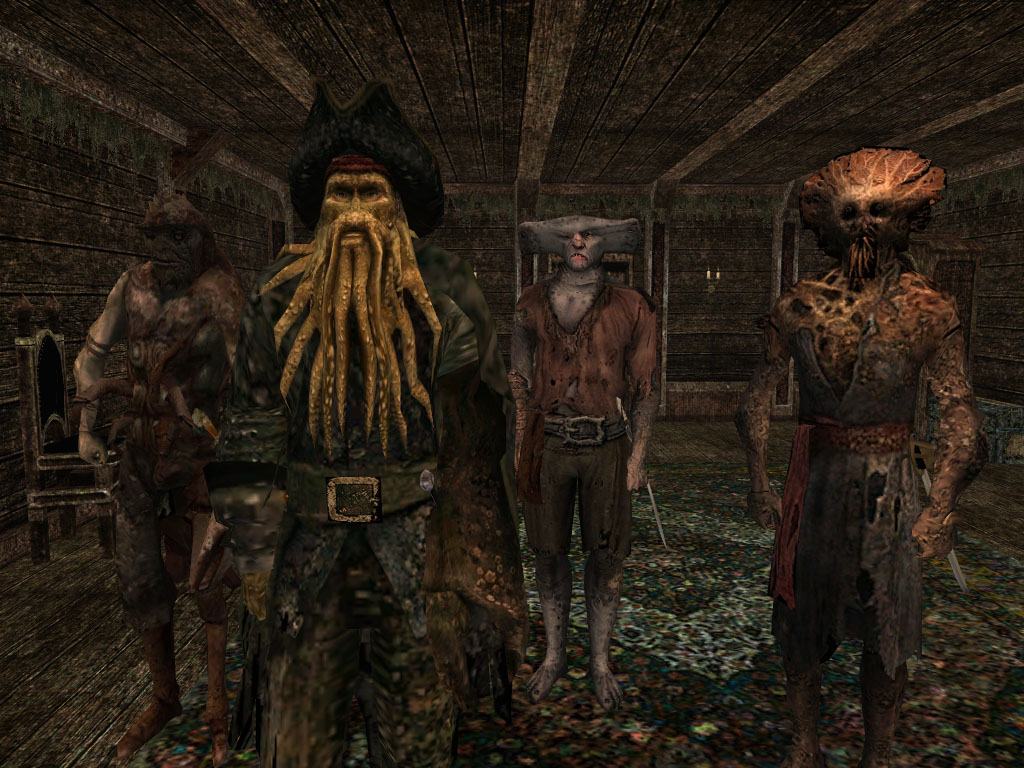 Women can now also sit down, and be assigned governors. 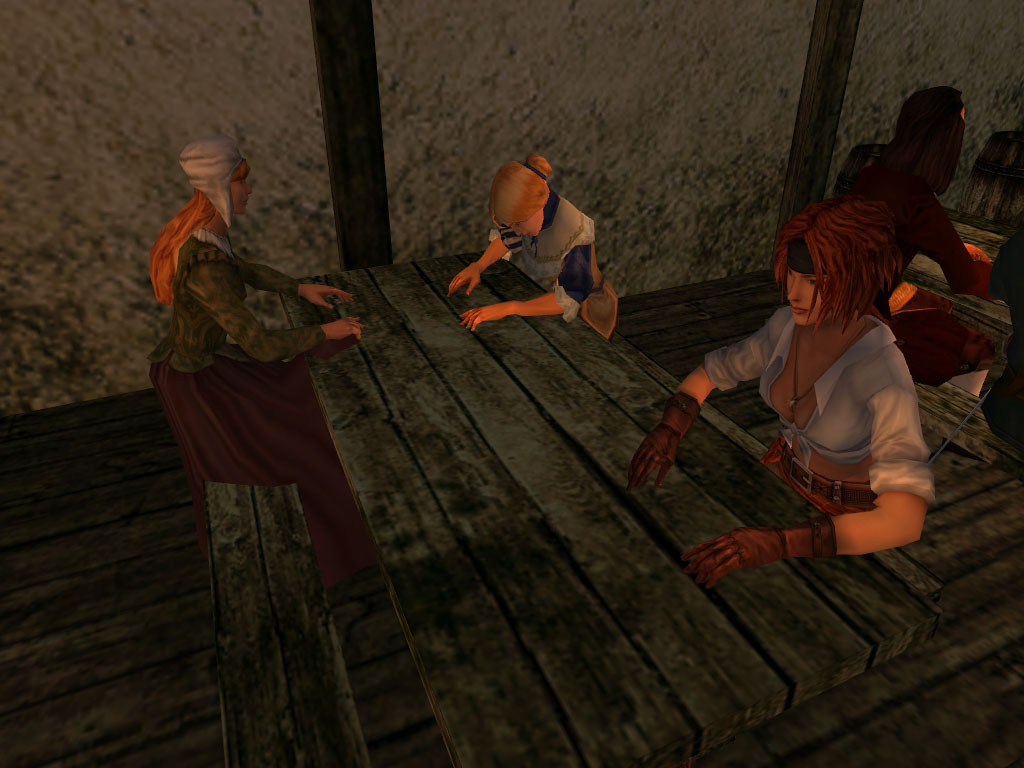 As for new ships; some that are used in quests or as character ships are the following:

“FastGalleon5” for “Ardent” by Grey Roger. 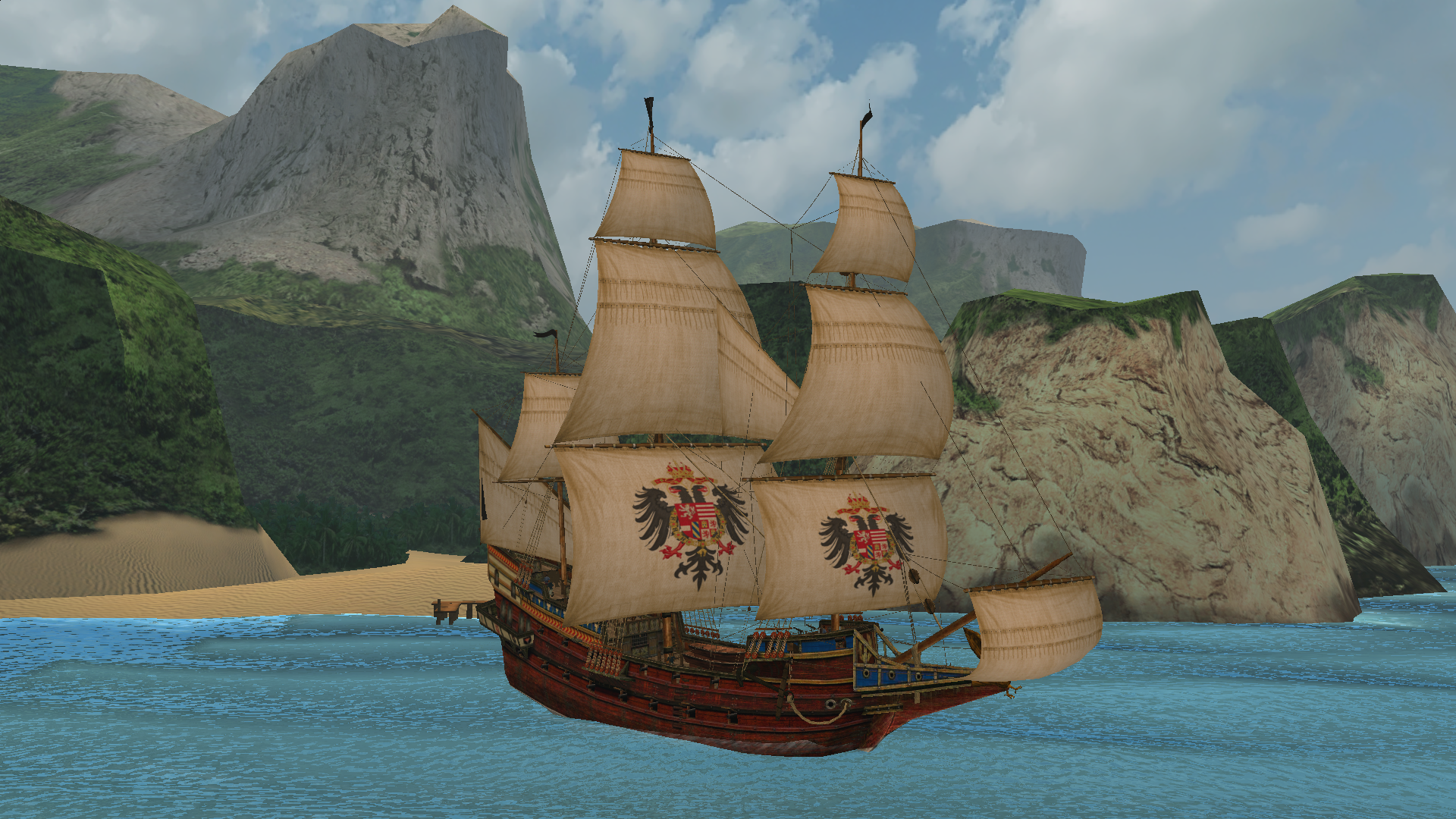 A new version of the cursed Mariana by GhostOfDeath91 for Ricardo Orellana, his free play character. 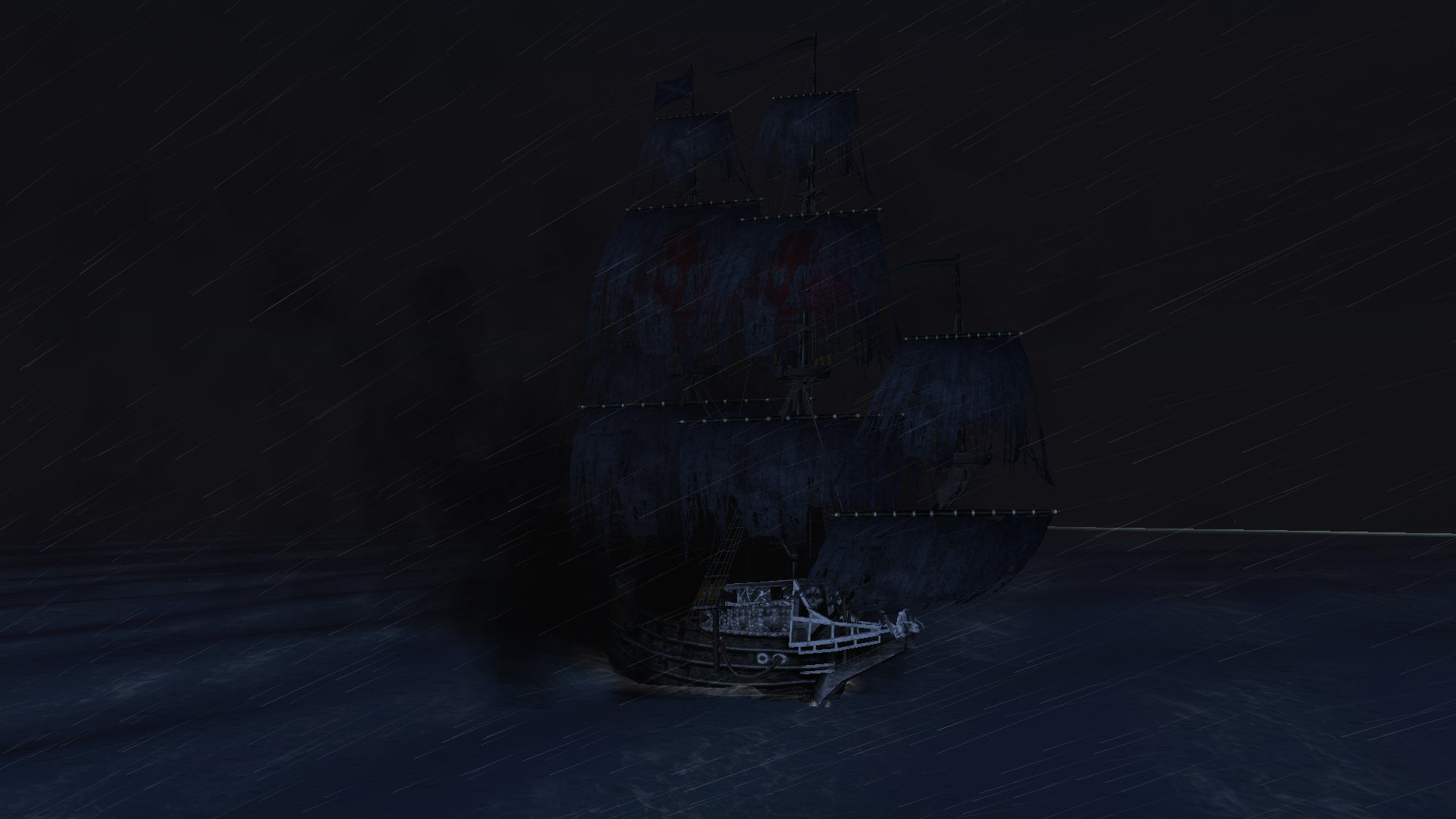 A modified version of Armada's "Kreyser" Class Frigate by me. Used as the “Mefisto” in the "Revolutions" period. 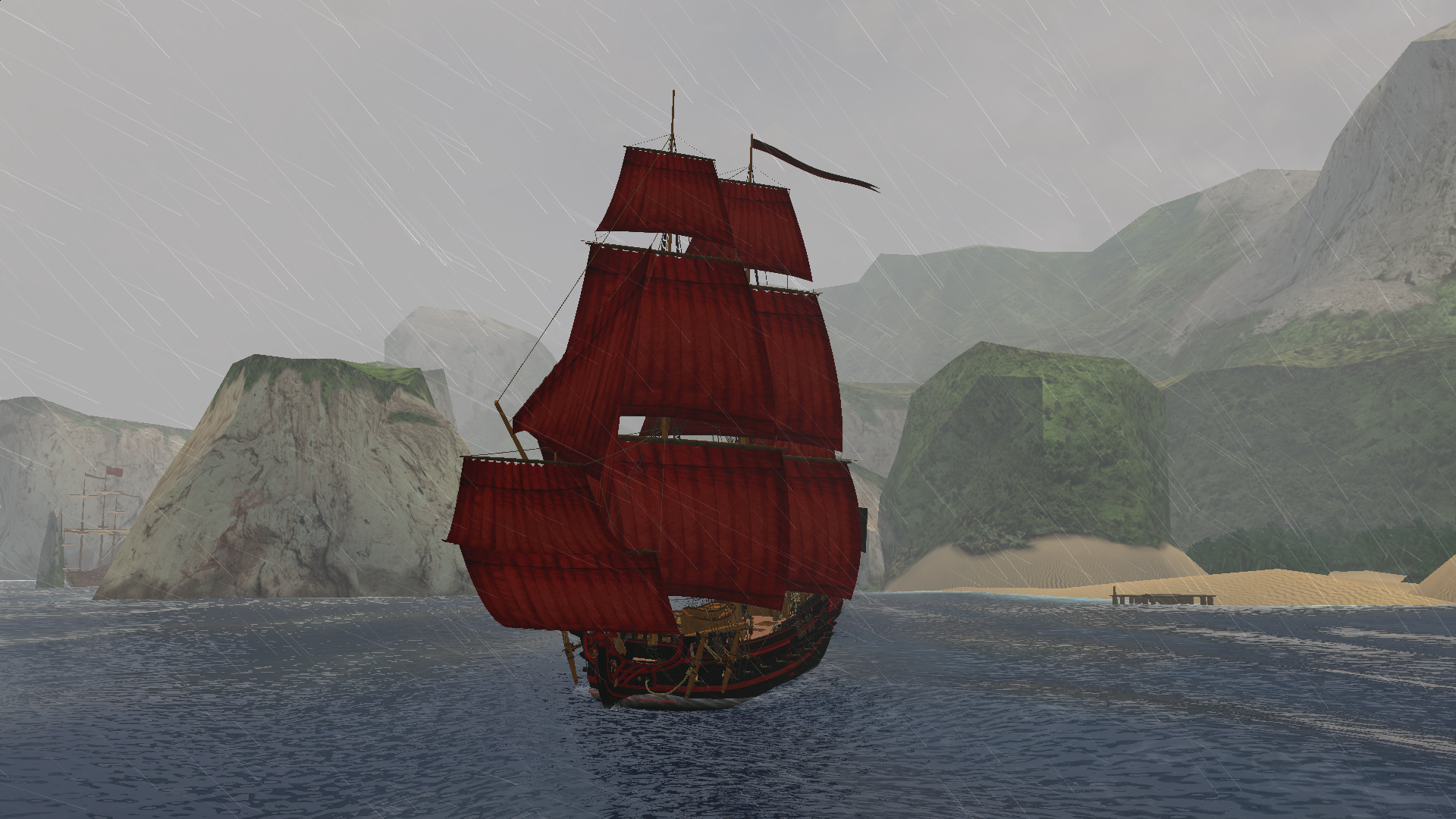 Last but not least, there have been new characters to play as. One of them being Drake Stranton, from the novel Cursed Vengeance by Brent Jackson. Model made by Jack Rackham and Grey Roger. 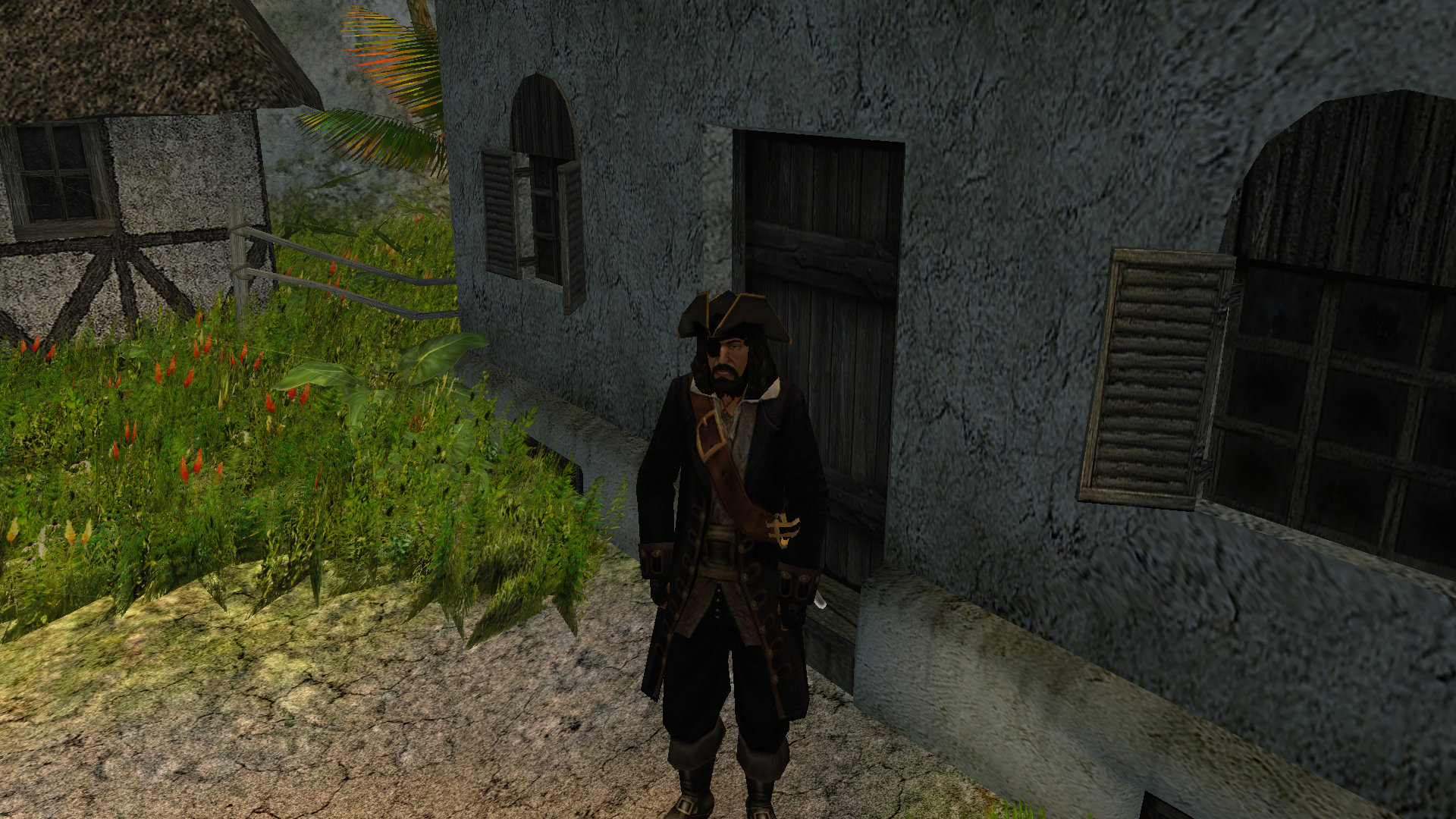 There is that, and more I couldn’t add here and now. So what are ye waiting for!? Go out to the seas ye scurvy sea dogs, will you!

"A shot from the new version of "Devlin Opera", also showing new character models for Maria Antonia (originally for "Ardent") and Piet Hein (another of Pieter Boelen's suggestions)." 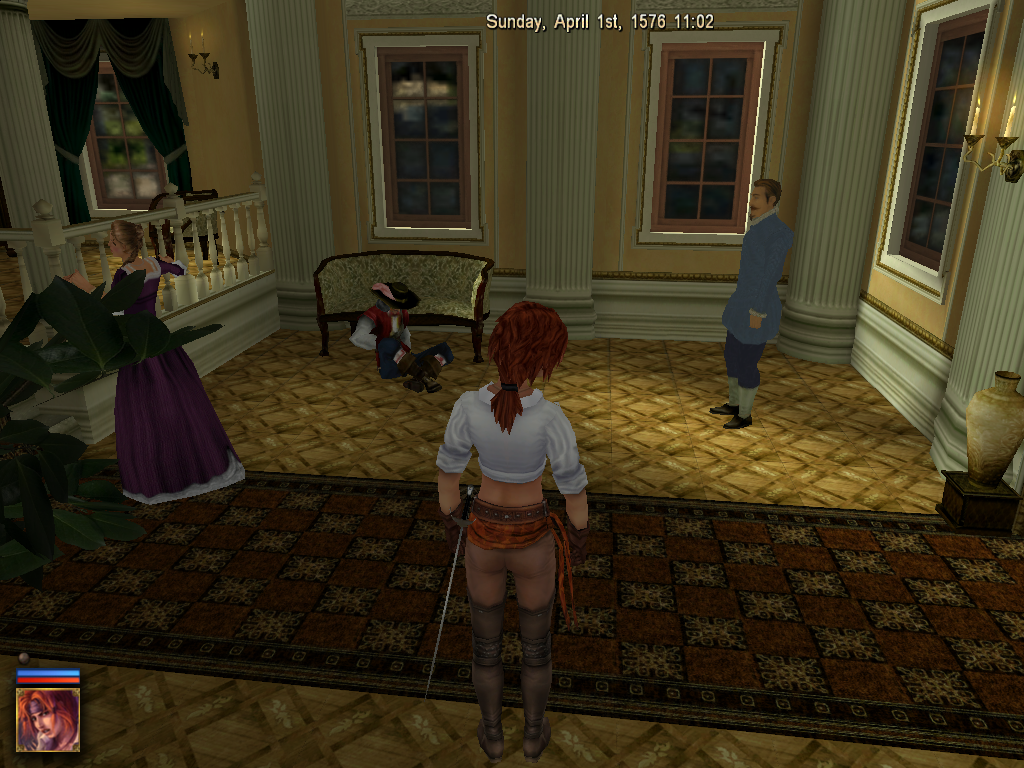 "San Pedro, the Spanish version of St. Pierre, because this is "Early Explorers" and the normally French Martinique becomes Spanish Martinica:" 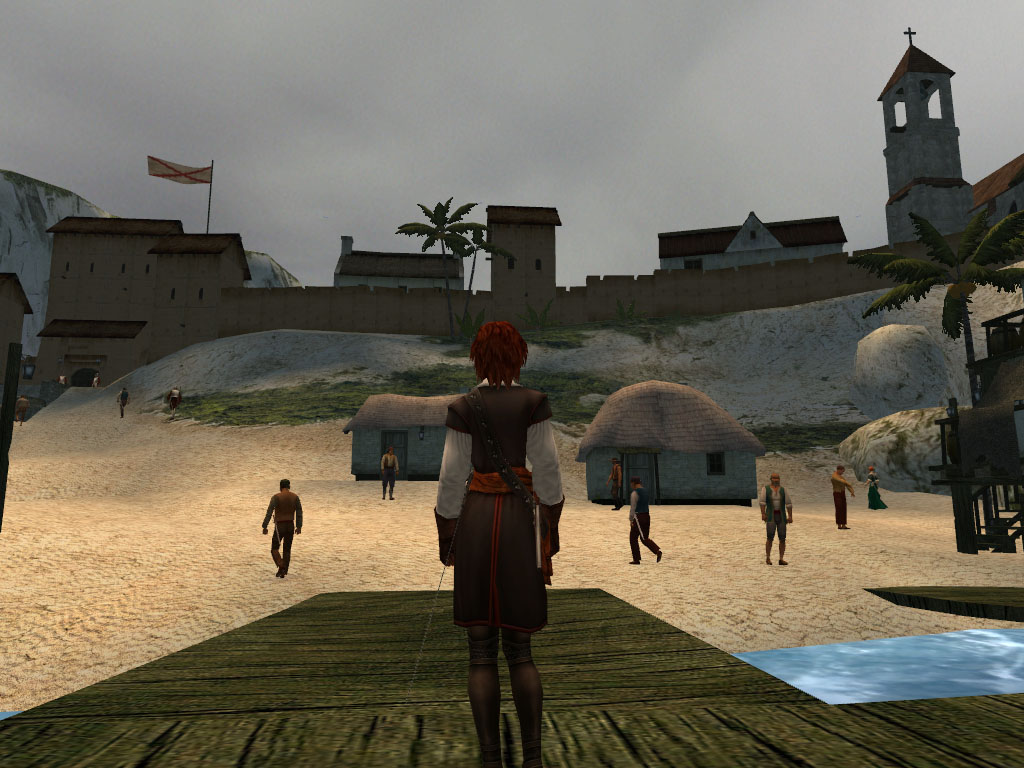 "Which means everyone gets a random Spanish name, though families are preserved:" 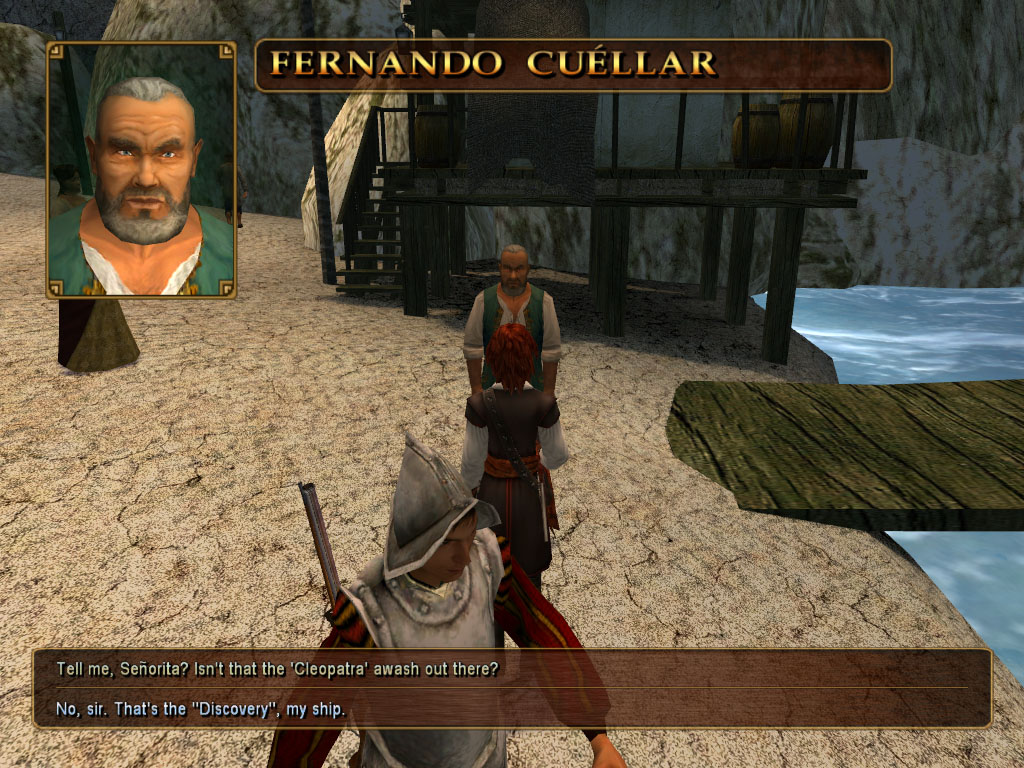 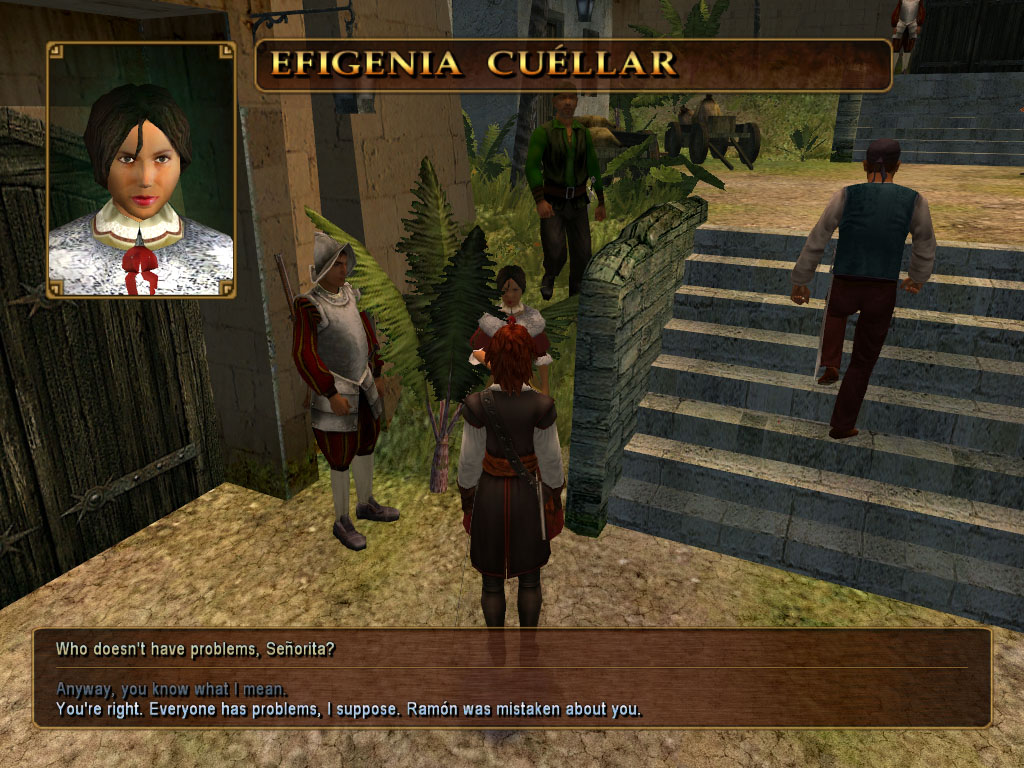 PotC: New Horizons is close to fully playable on Maelstrom 2.8.4, and things that don't yet work are being fixed.

We've embarked on a new project to port our best work to Unity. Read on for details, then download the demo!

Our biggest release in years recently went live with more features and refinements than you could wish for! Find out what's new in this article...

It's that time again! We've had a great year at PiratesAhoy! developing Hearts of Oak and our other projects, so join us as we celebrate all that we have...

Use this IN COMBINATION WITH "Part 2: Contents Archive"! Click 'READ MORE +' for further information.

THIS FILE IS NOT NEEDED ANYMORE! Updates released after 25th of may, install after everything else. Put together by Grey Roger.

OLD VERSION! Use this IN COMBINATION WITH "Part 2: Contents Archive"! Click 'READ MORE +' for further information.

This MUST BE used in combination with "Part 1: Installation Wizard"! Click 'READ MORE +' for further information.

Use this IN COMBINATION WITH "Part 2: Contents Archive"! Click 'READ MORE +' for further information.

Fine tuned ENB Mod with decent bloom and my own music replacer with tracks from Master & Commander, Pirates of the Caribbean and Port Royale 2. Read more...

WOW HI Everyone! So now that PA! is openly discussing the newest version of GOF ERAS2 (2.6.0) from Buccaneer's Reef Buccaneersreef.com on their website - I thought I would give a shout out for everyone visiting over here to come on over and give our new version a try. Most stable version ever in DX9 with 64 bit coming soon. Also more content than ever with over 600 distinctively different skinned ships on over 200 different models, almost 600 items, several hundred weapons and weapon combinations as well as 136 different playable historical characters (most being actual real existing pirates or prominent captains of the time possessing distinctive ships named with their original names), new locations and more! YARRRR!!!! MK

Someone needs to bring this game to steam or something. There are so many people who want this including me!!

No not Steam, GoG would be better. But even then why must every game still be paid for? Surely some games should be released free to the public domain when they are well past their time.

Can you please help me guys ?

Ive downloaded New horizons build 14 beta 4.0 upon starting the game i noticed that the ports in the world map aren't showing. it only shows the name of the island then you have to manually sail to the said port or just do a quick jump. but when you look at the world map you wouldnt know where is the port on that specific island because it doesn't show? any ideas how to fix this ?

I used to play this game a lot when i was like 12 years old.

Bought the game again to play it, of course it wont work on Windows 8.1.
Tried your great Mods, installed them, but my english sucks, if we got any german modders or players here.. would u help me to get the game started on Win8.1 or to install the mods u offer on this page so i can play this great game.

hello everyone if you like pirates of the caribbean and youre are dutch or can speak dutch come to my own site about pirates of the caribbean you can find cool downloads and books and movies and ofcourse nice info about the movies and games
check it out on : https://sites.google.com /site/piratesofthecaribbeangamesinfo/ please paste com with the /

I used to always play this game back in the day might get the new horizons mod and give it another shot :D

Wow, I almost forgot this game... But I remember that I found the Black Pearl, then I modded the game to get it as starting ship. :D

does build mod 13 have a black pearl ?

Tags
Embed Buttons
Link to Pirates of the Caribbean by selecting a button and using the embed code provided more...