An expansion pack to the critically acclaimed game Rise of Nations, adds a barrage of new features to the original game. Combining the epic scope of traditional turn-based strategy games with the fast-paced action of RTS games, enables players to explore 6,000 years of history as they amass powerful armies, build prosperous economies and perform acts of diplomacy.

Endwar mod for Rise of Nations

In 2040, the world is dominated by 12 multinational military organizations. The conflicts are getting more intense and the world is facing a new world war. The Endwar. 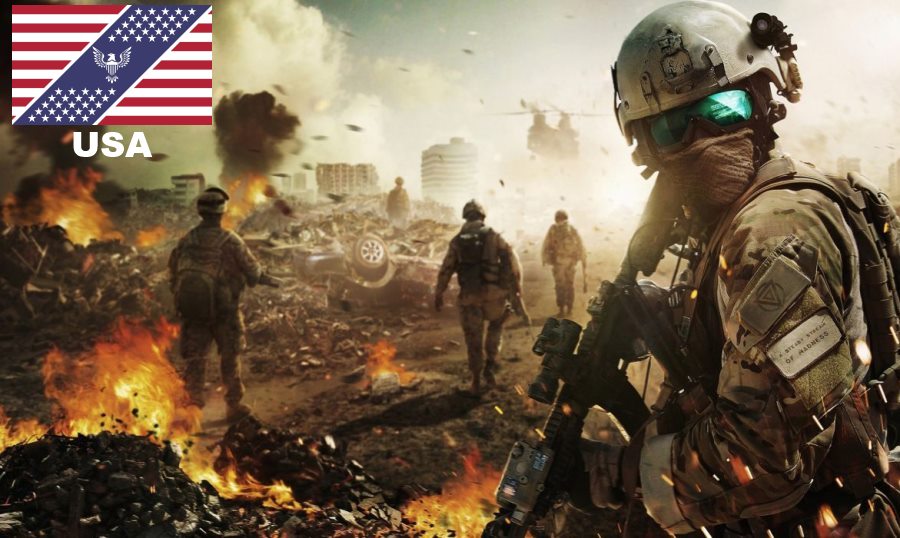 In 2035, the USA lose its position as the richest and most powerful country to China. Economic crisis, ethnic and political conflicts caused a military conflict within the United States. That forced the US government to withdraw all military forces home and lose its global leadership role. In 2040, the conflict is over and USA is making a strong recovery to reclaim its status as the world's leading superpower once again. 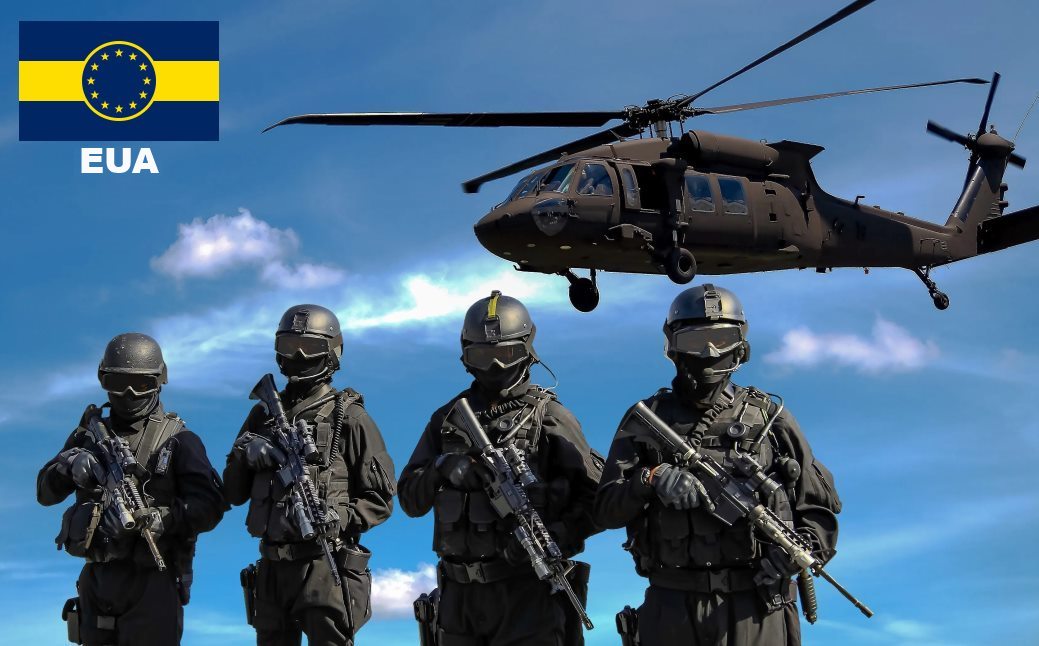 The EUA (European Union Army) is a joint military force of the European Union, a supranational union of twenty-seven countries in Europe. With Germany and France as key countries. the European Union is refashioned into a military alliance to challenge the Asia-Pacific Alliance and a revitalized Global Liberation Army. EUA possesses the most advanced military technologies and elite troops from member countries. 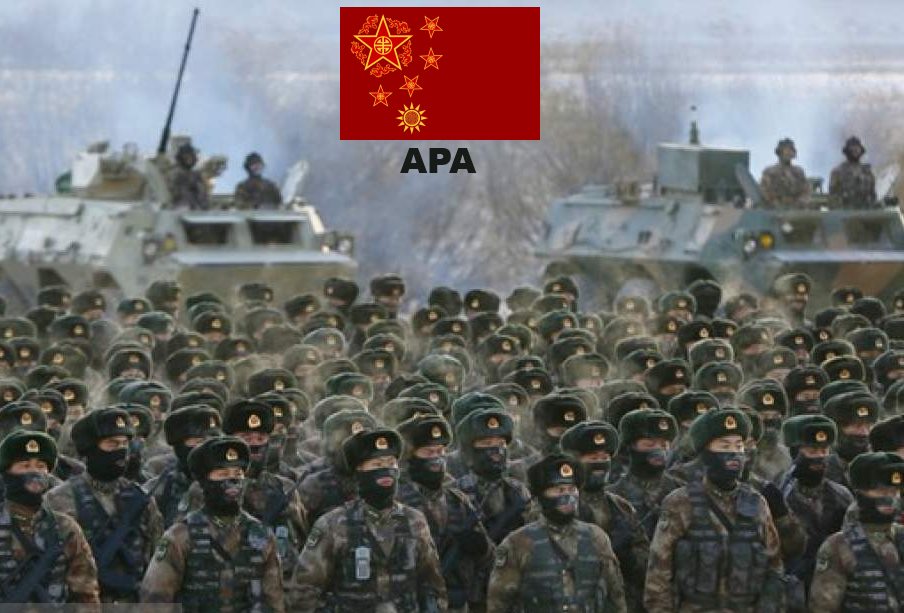 The APA (Asia-Pacific Alliance) is a coalition of Pacific Rim nations organized around China, Thailand, Myanmar, Cambodia and a unified Korea... Initially a fragile coalition due to internal conflicts, the Alliance ultimately solidified into a global superpower. For ten years, the APA became the most powerful political faction in the world. It brought about the unification of Korea. Invasion of Taiwan. Allied with the GLA. Expand to Southeast Asia and cause bloody wars with VPA in Laos and Vietnam. 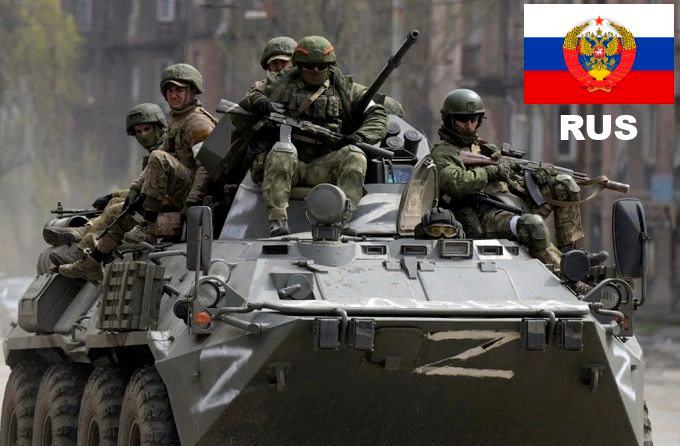 The RUS is a military alliance led by Russia. In the late 2020s, soaring oil prices helped Russia quickly recover its military superpower. After the emergence of the GLA, and the European Union established a joint army, Russia proceeded to create a military alliance RUS, with members mostly from the Soviet Union, Serbia and Mongolia. RUS possesses abundant resources and powerful armored forces to help it defend against the threat of EUA, GLA and APA. 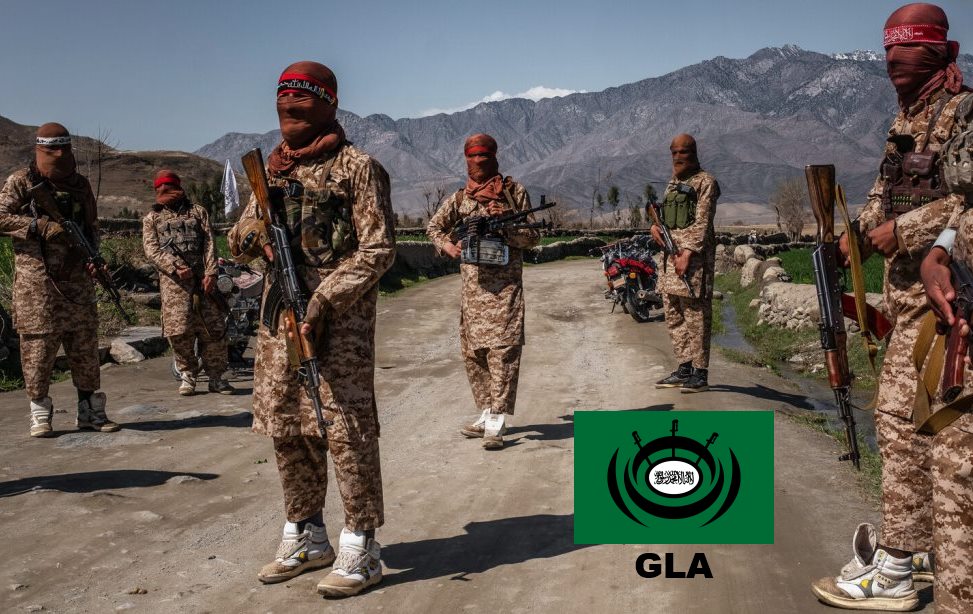 The GLA (Global Liberation Army) is a violent non-state actor established at some point in 2040 that controls the Middle East and North Africa. The highly decentralized organization incorporated various groups of insurgents, terrorists, self-styled freedom fighters, members of the criminal underground... The GLA's rapid expansion and aggression triggered a global conflict with the nations it opposed. GLA leaders did not abide by rules of military conduct and including terror attacks utilizing weapons of mass destruction. 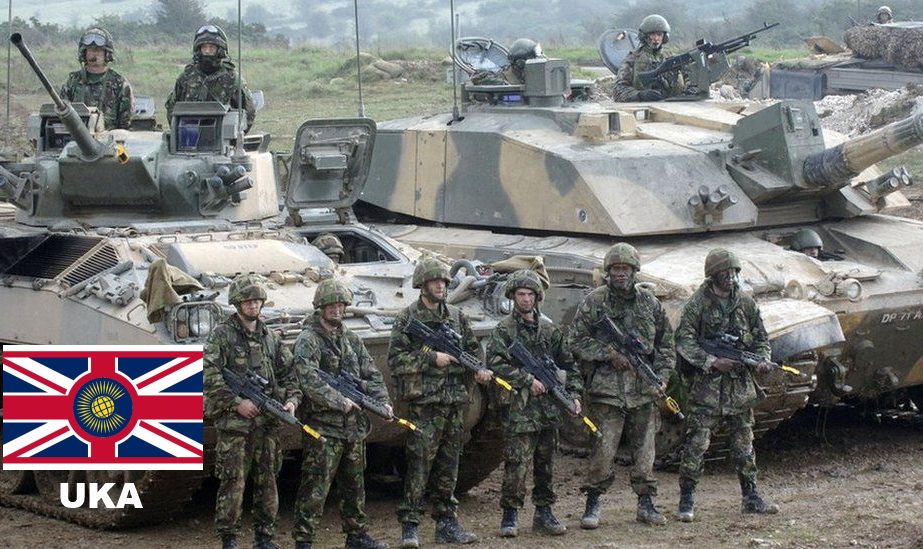 The UKA is a military alliance headed by the United Kingdom and the key members are Canada, Australia, New Zealand... This was an attempt by the British royal family to restore the status of the British Empire by consolidating the countries of the British Commonwealth. The strength of this alliance is that the member countries are scattered around the world. Globally located military bases make it possible for UKA forces to quickly deploy to any battlefield in the world. 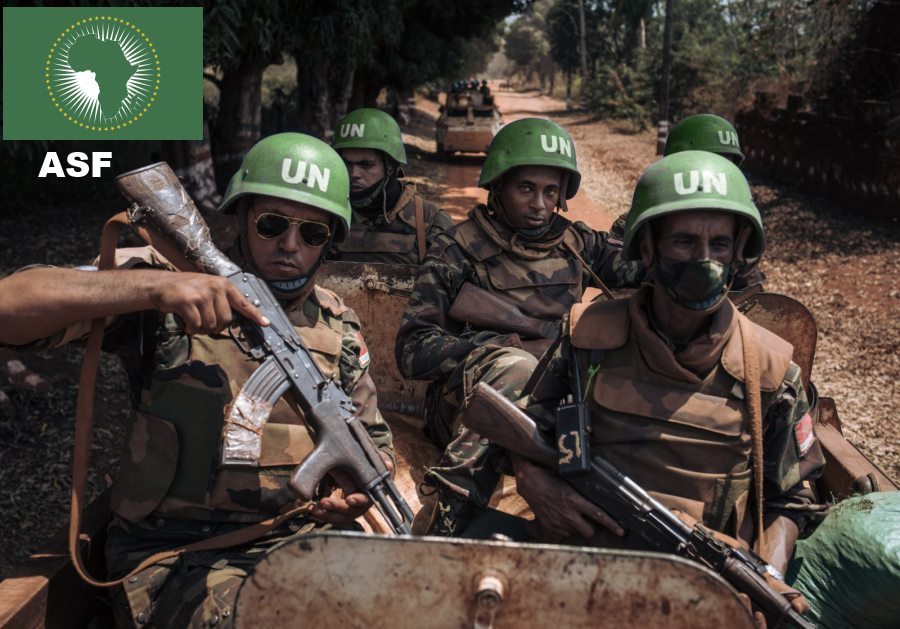 The ASF (African Standby Force) is an international, continental African, and multidisciplinary peacekeeping force with military, police and civilian contingents that acts under the direction of the African Union. The ASF is to be deployed in times of crisis in Africa. Addis Ababa, Ethiopia, serves as the Force's Headquarters. An army of the African Union is formed to fight the expansion of the terrorist organization GLA. 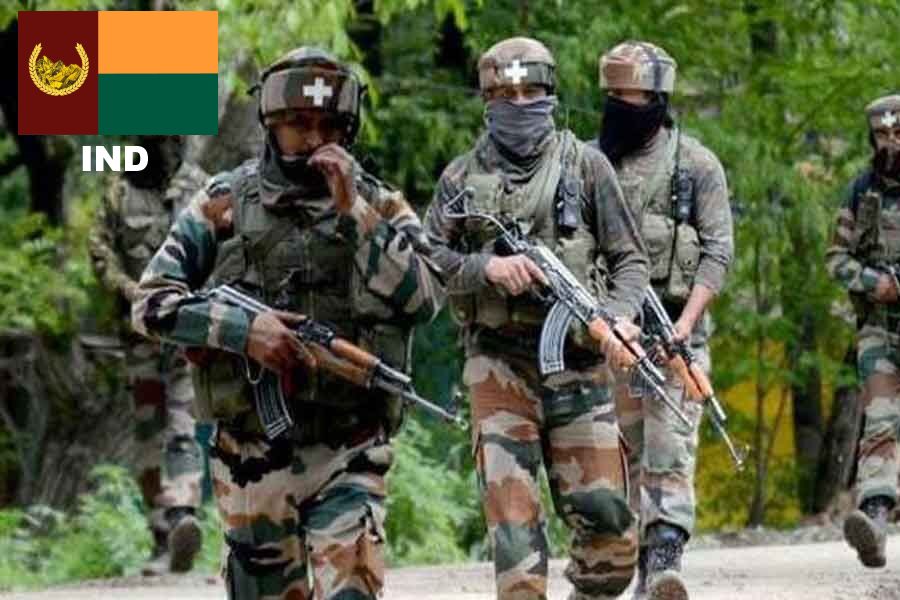 The IND is a military alliance of South Asian countries led by India. Other members include Bangladesh, Nepal, Bhutan, Sri Lanka. Its purpose is to counter the expansion of the APA from the east and the GLA from the west. With a brave fighting spirit, the IND force caused great damage to the GLA when this organization tried to conquer South Asia and forced the GLA to ally with the APA. 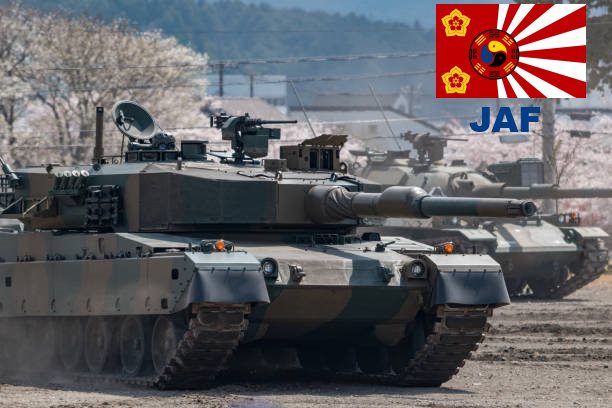 The JAF is a military alliance led by Japan. With two other members, the South Korean army in exile and the Taiwanese resistance force. After the US had an internal conflict and South Korea was destroyed by the APA. Japan reorganized its military forces and returned to armed development. After the APA invaded Taiwan, Japan declared war on the APA and formed the JAF military alliance. The JAF has a close alliance with the VPA in the Pacific theater. 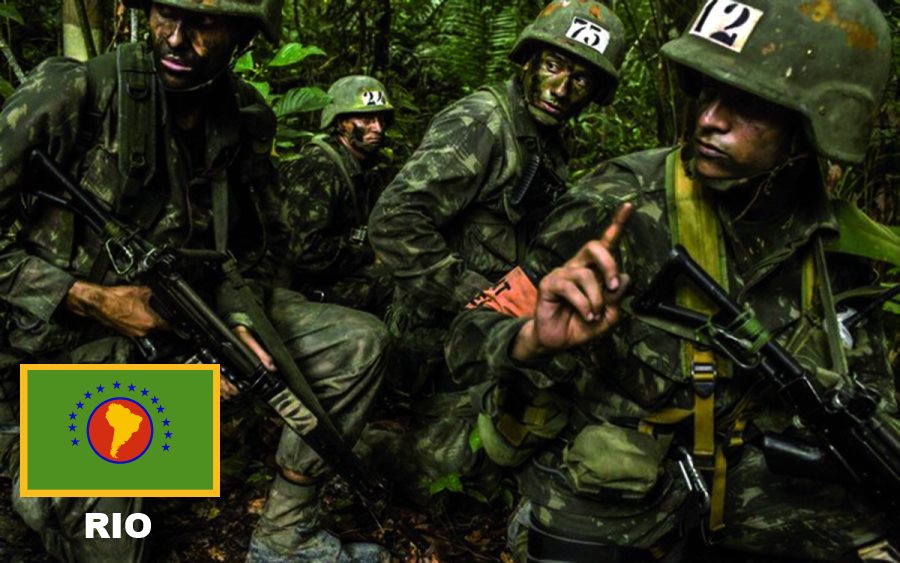 The RIO (the Rio Pact or the Treaty of Reciprocal Assistance) is a military alliance of South American nations. Established in 1948 in Rio De Janeiro. After the US exited this alliance in 2035, it became the joint military force of the countries of South America. The central principle contained in its articles is that an attack against one is to be considered an attack against them all; this was known as the "hemispheric defense" doctrine. 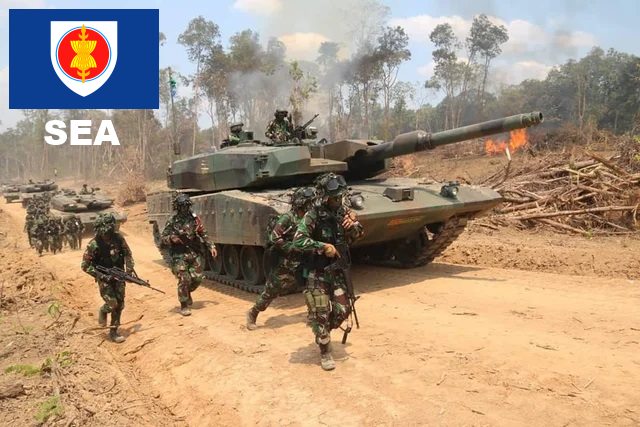 The SEA is an international organization for collective defense of Southeast Asian island nations. Includes Indonesia, Malaysia, Singapore, Brunei and Timor-Leste. Its policy is to protect the interests of the Southeast Asian island nations from the APA's expansion. Unlike the EUA alliance, SEA have no joint commands with standing forces. In addition, SEA's response protocol in the event of APA presenting a "common danger" to the member states was vague and ineffective. 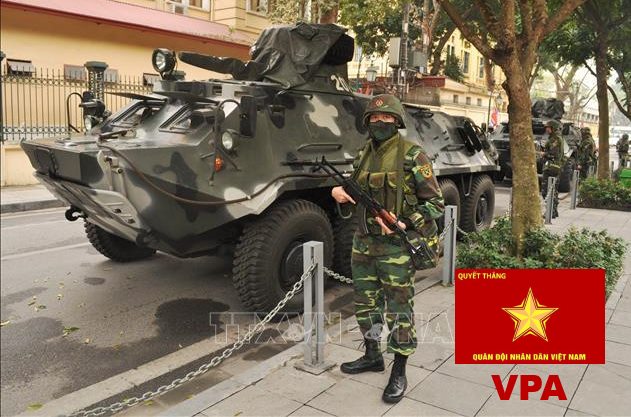 VPA is the Vietnam People's Army along with two allies are the Laos army and the Khmer revolutionary army. This force is fighting against APA's invasion in a bloody war since 2039. Possessing elite guerrilla armies, the VPA stopped the attack of one million APA troops and forced this force to be mired in a fierce war of attrition.

Finaly here is the new version of Modern Times: World in Conflict V5.0.

May 23 2019 Kings and Conquerors: The Hellenistic Era

The Hellenistic Era 0.2 has now been released! This version overhauls several core mechanics and makes a number of new factions playable.

The second update for the Age of Darkness mod is here. In addition to new patches, it also introduces more units and buildings to the original Age of...

In 2040, the world is dominated by 12 multinational military organizations. The conflicts are getting more intense and the world is facing a new world...

A "beta" version of this CTW is finally released. Scripts, custom generic battles and other mechanics are still a WIP, but the CTW is already fully playable...

Bug Fixes and many changes... Enjoy!! A Rise of Nations mod for extended edition. First i rework the game with the originals factions makin' it more accurate...

On 5/2016 Ryder has also released ROL BIG Archiver for Rise of Legends:
Moddb.com

On 5/2016 Ryder has released a Blender addon for 3D modeling for Rise of Nations:

So is World in Conflict exclusive to the EE version now? Is the Beta 2 on ModDB the same as the one on the Steam Workshop or is it older? The version Steam is nearly 100MB more than the one here on ModDB.

hi I need to download Rise of Nations: Thrones and Patriots
where I can find the link?

Only downside is the fact that by the end of the game every faction has the exact same generic soldier, boat and airplane. Although this can be solved easily be capping the technology tree at the enlightenment era :D