Post news RSS What is MCG Darkest Hours all about?

This is a copied article from a reddit user who found my version and wrote an own summary of what is Darkest Hours all about: Darkest Hours - Explanation & Introduction

Greetings MechCommander,
you find the downloadlink below. It is the right one. Version 4 is the most complete MCG Version ever. When you download Fullversion v4.2 you have the biggest version of MechCommander Gold, that ever existed. 290 mission scenarios are possible to play with this Fullversion. The advantage compared to previous mod versions is that this full version folder is a pre-installed game folder that just needs to be extracted into your game libraries in order to play it with mounted *.iso file which is included although in the main folder. The players have the choice between two big single player campaigns, a bunch of solo mission scenarios and ~65 multi-player scenarios for gameranger. 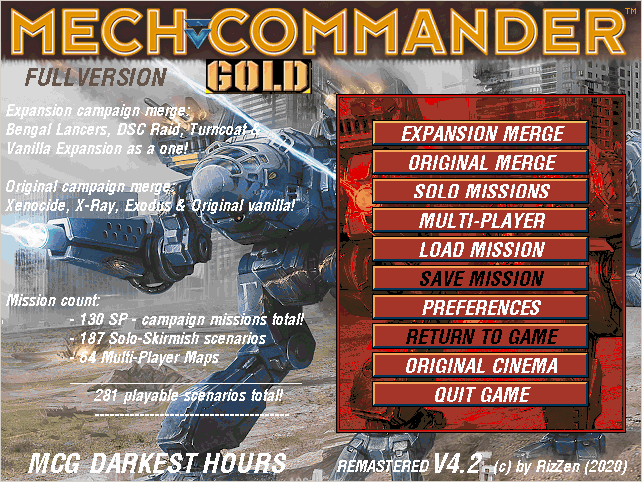 Notice: For best result start MCX.exe files with WinXP SP3 compability and 256 reduced colors, Menu will always be 640x480 resolution with frames & before you start it the first time DirectPlay must be installed. For more information read below (installing on other OS f.e.)

Short Description
As many may pray: MechCommander Gold - Darkest Hours is a total conversion mod - is wrong. MCG-DH was created with the primary intention to leave ALL internal game mechanics vanilla - so that the end-product is exactly feeling like the original and players are familiar to how it all works from the very first beginning of playing this mod.
MCG-DH is an evolved MechCommander - Desperate Measures pre-installed gamefolder that contains all vanilla content plus user customer made & latest official release content. When you download MCG-DH you miss nothing. MCG-DH contains all 42 original missions in its large XXL campaign merges AND all three independent customer campaign standalones. All in all the two campaigns (original & expansion) are merged with 78 customer created missions.
MCG-DH is the most complete MechCommander fullversion that ever existed. You can actually play more than 250 different mission scenarios just with the basic version. But that´s not all - download (free), install and discover it yourself, when you are a TRUE BattleTech fan - you can´t leave that gem out!

MechCommander Gold - How to run it on modern machines, and what are all these mods?

I highly enjoyed MechCommander Gold, but coming back to the NGNG forums after all this time, I had myself asking, what the heck is going on?

What is with all these different versions of MechCommander and all these mods floating around? What are they? What's compatible with what? Where are the guides I need? What should I be doing if I want to play?

Note: Because there's so much content and stuff to cover here, I won't be providing instructions myself. I'll just need to link to relevant pages with good information on them.

First of all, what is the difference between MechCommander "Gold", "Desperate Measures" and "Darkest Hours"?

Is a fan-made re-release of the game made in 2017 with a lot of changes. It completely overhauls the original campaigns, a lot of technical stuff about the game and is a massive expansion over the original game. There is a mountain of content over vanilla MCG. Note that darkest hours heavily modifies the original and expansion campaign. They're still there, but very different. Longer missions, more missions. It also has a built-in editor, and already has the high-resolution executables I'll mention later.

Here's the main list of its differences though I assume they go deeper than that.

What is this about "high resolution"?

Because MechCommander Gold is such an old game, resolution options weren't exactly aplenty. However, as we've seen with many older games, it's a relatively easy fix by providing a modified version of the executable that supports higher resolutions. To this end, this mod exists:

Resolutions: How to handle them.

What Mods are available?

As far as I know, no mods exist for Darkest Hours. These mods are all for the original version of MCG:

What about expansion campaigns? Where do they all fit in?

You're a bit limited here by technology. The original Commander gold only has room for 2 campaigns.

To that end, you have 3 amazing campaign-pairs all made by magicX:

These campaign pairs can only be used one at a time, you can't run all 3 at once. Note that they already come with high-resolution launcher executables, so you don't need to do that yourself.
All major expansion campaigns made by fans are already included in MechCommander - Darkest Hours

I just want to play the original MechCommander - Gold!

There's an NGNG video here for that purpose. What it boils down to is downloading an ISO, extracting the files to somewhere you want, and running the game from there. However, it does have a note on enabling DirectPlay which may fix some issues.
There are a million places to download the ISO. The easiest would be the link in the description of the video I linked above. However, MyAbandonWare, ModDB likely has it, the game engine has it and others do too.

I want to do multi-player!

For that you need GameRanger, and Darkest Hours has lots of support for how to get everything set up with an extensive guide here.
I have no idea if it's possible to get the original game working with multi-player. I think so, but it's beyond the scope of this guide.

I am a newbie, how can i get background knowledge?

For MechCommander newbies that never played this old game but are interested - this forum is full of information how to install and play MechCommander today on a Windows10 OS system and many other OS. Here some useful links for information: