MechCommander - Resolution notes Actually i'm recreating the tactical guide for mechcommander beginners and players. Since NoGutsNoGalaxy.net is lost - the only copy of information seems to be the one on my personal backup. I upload the information with some cosmetical redesign here on ModDB. This is Part V of the MechCommander/MC Beginner's Guide:

First of all there is to understand that in MechCommander *.exe files are splitted when it´s coming to play the game. There are two options to start MechCommander. First is for Single-Player Features (Campaigns & Solo-Missions). The second is for Multi-Player Online games over Gameranger (see above). All MCXResolution.exe files where done by magic from hardline productions & moddb. This way i want to thank him for giving MechCommander more potential by compiling those great files for single-player game features.
Finally i could isolate the resolution related hex-coordinates and learned how to create resolution.exe files myself. I uploaded the missing resolutions many people asked me for long ago.

1. How to play different Resolutions in Single-Player Mode

For Single-Player games, which are the Original/Expansion Campaigns and Solo-Missions you just need to mount MechCommander ISO file or insert Original MechCommander Gold Disk into your DVD drive and start game manually by executing one of the Resolution *.exe files (MCX1440x900.exe f.e.) and entering the game. Here is a list with common paths:
Low resolutions

for v3.0 users i have changed standard starting resolution from 640x480 (only menu fullscreen mode) to 1024x768, what gives a better resolution without changing anything when starting game first time. This point of list stands below cause you can change the resolution before using MCXOriginal.exe to start game. The procedure is the same like changing resolution for Multi-Player Feature. So have a look below how to manually change the resolution by using one of the four standard resolutions for MechCommander. But best way is to try out best resolution for yourself and making a shortcut on desktop for it. Higher Resolutions may cause more crashes. If you want to workaround choose lower resolution and start missions again when higher res don´t work on single missions.
Start all resolution *.exe files (Win10) with Windows XP SP2 compability, reduced colors, 8bit - this setting works normally on all Windows 10 versions. For playing with Windows XP you don´t need to change any compability settings for starting exe files. 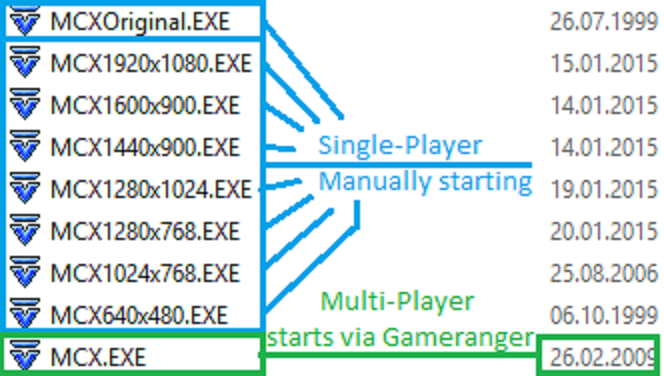 2. How to play different Resolutions in Multi-Player Mode

Like mentioned above (Gameranger Tutorial) for using Multi-Player feature you have to start game with the MCX.exe of your Darkest Hours Main folders, path should look like that:

You have to launch game via Gameranger by hosting a gameroom to play Multi-Player. When you just execute MCX.exe without having gameranger installed or running you just will play Single-Player. To change resolution you have to change an entry in Prefs.cfg. This file should be in main folder too, just where the exe files are. When you open the file with Editor it will show you a list containing some standard settings for game. For changing resolution just this line is important:

You can change the number from 0-3 (the four basic resolutions of MC). This list shows you the available standard resolutions which are the only working for Multi-Player Feature at the moment:

You don´t need to change any compability settings before starting this execution by launching the "Start/Launch Button" in gameranger´s gamerooms multi-player game gets automatically started (Gameranger needs path to MCX.exe of MCG-DH-v3.0 to know what exe it has to start). It is recommended to mount ISO before starting MP games but even that won´t be necessary cause gameranger loads ISO automatically from Game´s main folder. If you have trouble with Win10 try Compability Windows XP SP2 with 8bit reduced colors, should work to make it run if necessary.
DONT RUN Game.exe-Resolution which is higher than desktop resolution! Game will crash. For playing 1920x1080 your windows desktop resolution must be the same size or bigger. Keep in mind that 1920x1080 is the most unstable resolution.
For running game with low resolutions edit resolution line in PREFS.CFG from value 2 (two) to 0 (zero). Otherwise minimum resolution game starts with will be 1024x768, further instructions above.
Menu Resolution is always 640x480, that´s why its on top left corner of the screen on higher resolutions. Maybe it is possible to make a bigger menu artwork on long time perspective.

Today i found out how to create more resolution game *.exe files to make playing the game comfortable on all imagineable monitor-systems, those are the new available resolutions for MechCommander. They will not only work with Darkest Hours - no they run on each standalone full-version of the game, original one and customer campaigns:
New Resolutions

Notice: To play 640x480(only menu fullscreen)/800x480/800x600/1024x600 & 1280x600 you have to change Resolution entry to 0. Preset of Darkest Hours is 2 which means game starts with 1024x768 minimum. 0 means 640x480 minimum. When you dislike changing entries in PREFS.CFG manually you can download this optional PREFS.CFG-downgrade (below). This file needs to be pasted into main Darkest Hours game folder replacing the older version by overwriting it.

Down to present day magic from hard-light productions where the only one who have created some resolution *.exe files for MechCommander. Today i created nine additional resolutions to close up the missing GAP within different Widescreen and 4:3 resolution game offers. Magic was the one giving me the deciding information of how the game.exe files where changed to have different ingame resolutions. My bad magic couldn´t remember the exact position of entries which had to be changed to effort more resolutions. So finally i found out myself how it´s been done decades ago. Magic told me that only two certain adresses of hexadecimalcode defining the ingame resolution. To find those i only needed to compare all existent *.exe files, finding the differences and at which Entry-Line they are in. I could isolate two certain adresses and found out that resolutions are stored within two bites of code in a small code XX-YY. They where exchanged like it is usual in hexfiles.
Important notice: Keep in mind that its no matter what resolution you choose, menu screen is always 640x480 sized - on higher resolutions menu is at the top left side of Monitor.Ingame resolution will always be fullscreen with all resolutions. 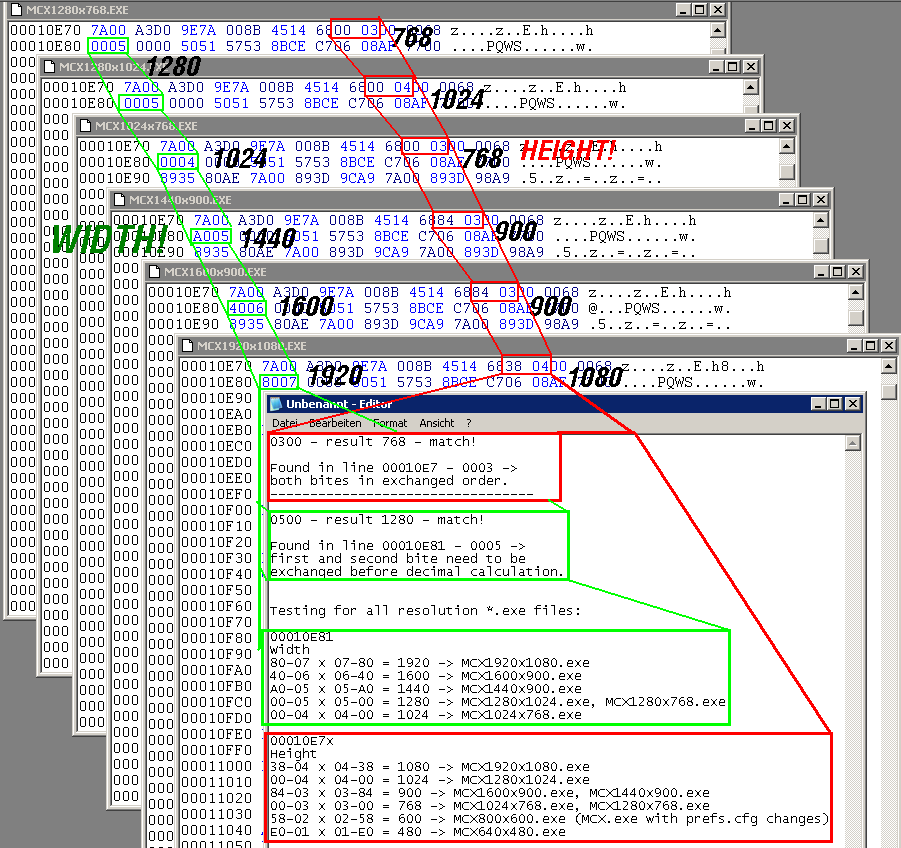 On basis of this knowledge i created some copies and edited them to make all imagineable missing resolutions available. My first testing was only game menu and some solo- & campaign-missions but game was stable on all resolutions i have created.

My hope is that more diversity with resolutions helps more players to find a way to start playing the game without resolution-crashes cause of wrong desktop resolution or special monitor size and format. Just take the resolution of your desktop to make sure game is running smooth. Have fun with new resolutions, dear mechcommander community.

Edit: When you miss a certain resolution, dont mind asking for it. Makes in-mission fullscreen experience unique for MC.

The "PREFS.CFG" file defines technical settings and values and forces game to start with this changes. This file must be "Read-Only" - otherwise MCG will overwrite your changes or updatet files.
Complete content of "MCG Darkest Hours\PREFS.CFG"Quote 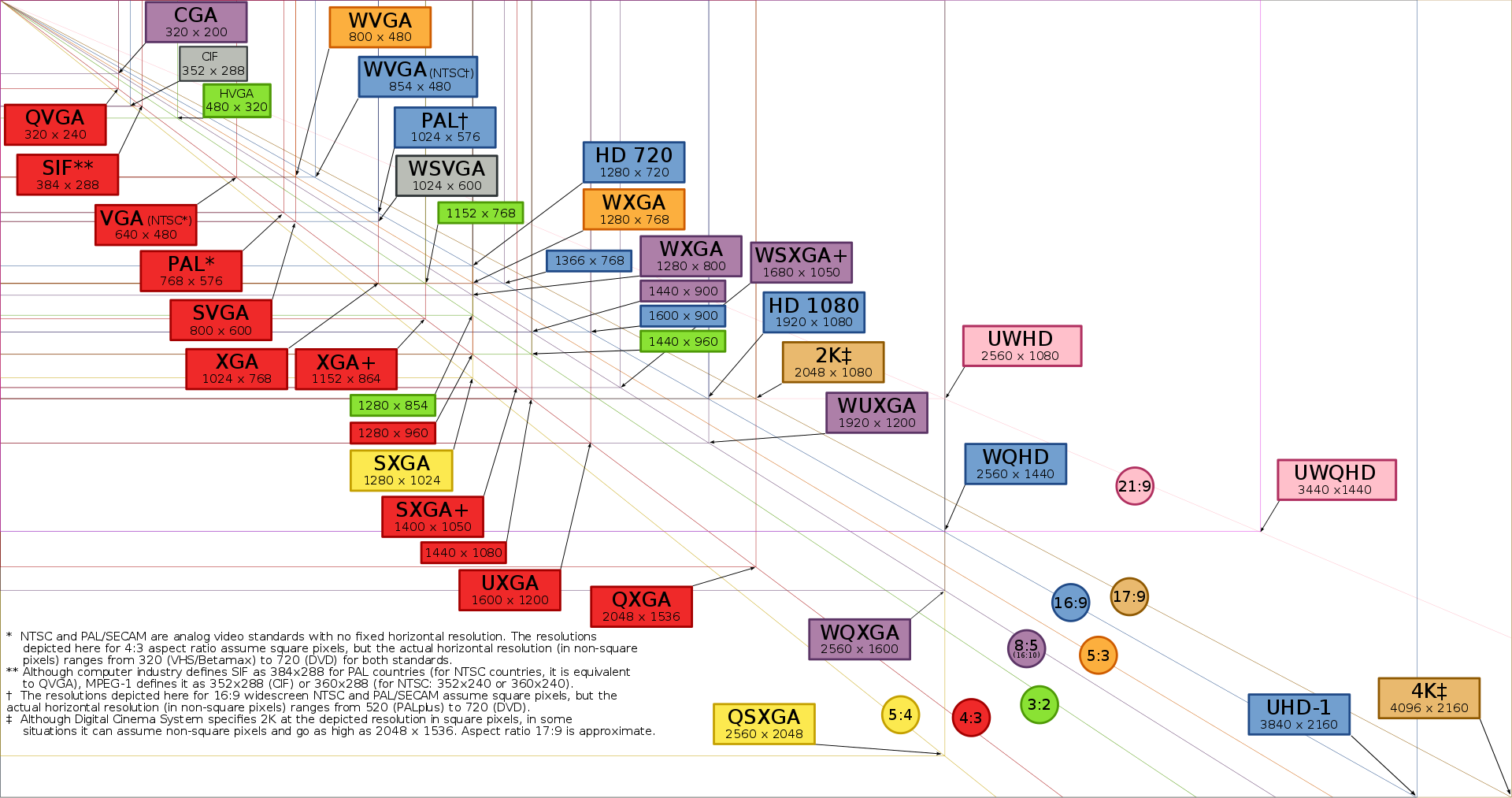