Hello MechCommanders,
this is just an overview showing all different MechCommander Standalone Versions, that exist. You can download ALL of them here on modDB. 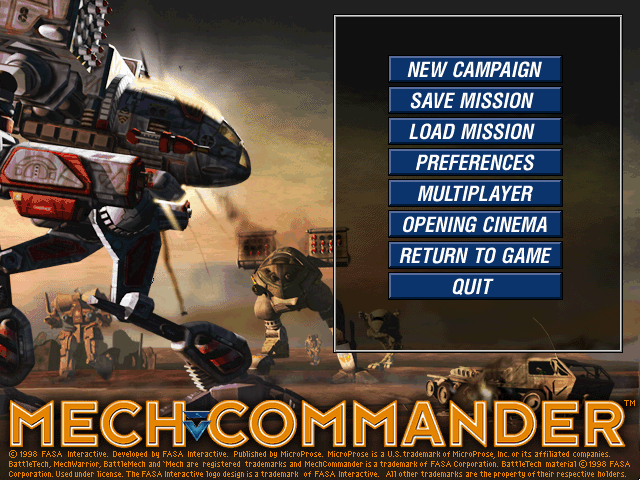 1. MechCommander 1 and MCG, the expansion where released in the end of the 90s. The Expansion was the last official release by FASA Interactive. The game was created and released under the lead of Mitch Gitelman.

2.-4. 2000-2002 - customer modders created six more campaigns that are divided into three original and three additional expansion campaign overrides. That times those files only where available for patching up the basic versions with the new campaign missions. 2006 magicX was the first one who created more game resolutions and put those six campaigns as three standalone versions on modDB. 2020 i updatet those (literally never really finished and bugfixed scenarios) and polished them. All available here on modDB. 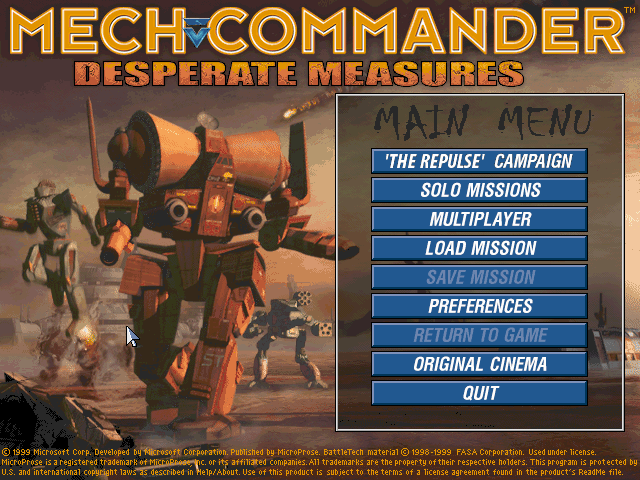 5. Around 2008-2009 a russian modder released his personal demo mod version. It was although only released as patch for the original. I created a seperate standalone out of it with one playable short 8 mission campaign. I released it cause i really liked the missions and the micro-management the creator put into each map. Pleasure to playthrough - and in some situations really competing. 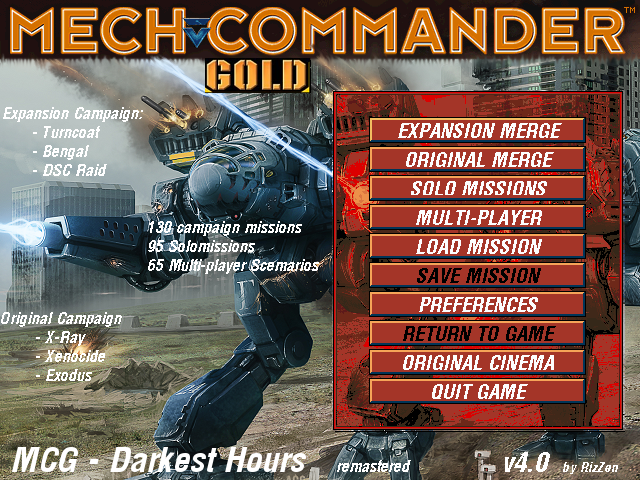 6. 2016-2019 i put my hands on MechCommander Gold - Desperate Measures v1.8 and evolved the basic pre-installed game folder into the biggest fullversion standalone, that ever existed.
MechCommander Gold - Darkest Hours is the most complete, bugfree, stable, content-extending, mind exploring standalone version that ever existet. It is blown up to more than 300 mission scenarios TOTAL that can be played and discovered by players and combines 1.-4. in an ultimate merge with technical enhancements and new MechWarriors. Simply... basically... another dimension!
Even Mitch Gitelman loves this built! 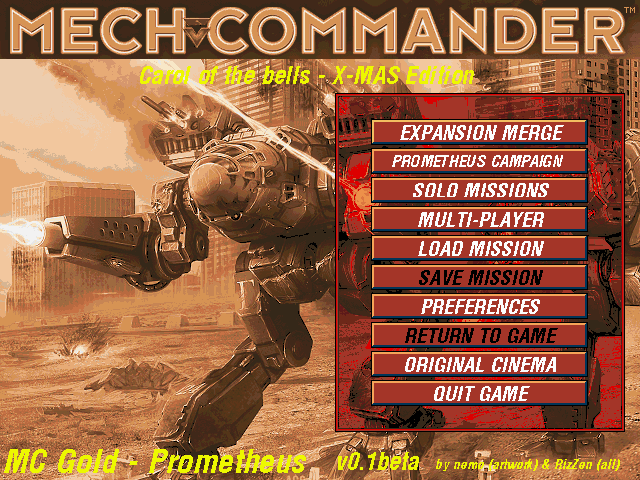 7. 2019-2020 i am working on MechCommander Gold - Prometheus for over a year now. Only in my sparetime between business and real-life. I enjoy the possibilities and potential the game still has after all those decades. In spite of the MC content purge 2019 when NGNG servers where put down and the fact that i had to reupload all content - i could create and release 33 brandnew missions for the new Clan Wolf Campaign Edition standalone built. The X-Mas release is a fullversion special beta fullversion for fun and testing. This version will be further developed in the next couple of months / years. Any feedback & ideas to make a better game are appreciated!

RizZ Note: In order to play MechCommander you just need to download one of the full pre-installed game folders, extract it on your game folders and start it from there while the MCGold.iso is mounted. Physically the game only can be installed on 32bit OS or below. MechCommander is freeware since 2006.

How to become successful in MechCommander (& life)!

This is a message to all human beings! This article is dedicated to MechCommanders that may have problems with the high average difficulty scale and complexity...

What is MCG Darkest Hours all about?

This is a copied article from a reddit user who found my version and wrote an own summary of what is Darkest Hours all about: Darkest Hours - Explanation...

This is a beta release of a full, wholly playable MechCommander:Lostech based on the abandonware and freely distributed MechCommander game plus all available...

This is a lightweight NoCD file for MechCommander Gold. Just mount this disk image with a program like Alcohol 120% or DAEMON Tools. Enjoy!

This is to be used in Darkest Hours version Prometheus 5.0 Enhancements: - Clan campaign buy from the start. - Consistent UI in preparation screens. ...

This is an optional patch - containing new resolutions AND NO-CD resolution files for testing game without original CD / ISO file. A resolution compatibility...

Updated version of 0.8 with bugfixes and some extra features. Version for compatibility ONLY with Darkest Hours packs. Put the contents of the extracted...

Updated version of 0.8 with bugfixes and some extra features. Version for compatibility with non-Darkest Hours packs. Put the contents of the extracted...