Dungeon Prospector is an old-school dungeon crawler/roguelike. You're in infinity dungeons (in length and width) full of monsters and treasures. How far can you go and how long can you survive?

To all linux users, note: unity3d is optimized for ubuntu, so it may not work on your distribution. There have already been issues with Debian and Xubuntu. So I recommend you try compatibility with the demo first.

Thanks for voting and helping Dungeon Prospector on it's quest to become the 2021 Indie of the Year. You are now in with a chance to score some free games. Help this game secure more votes by embedding the widget (or link) we have included below on your favorite sites. 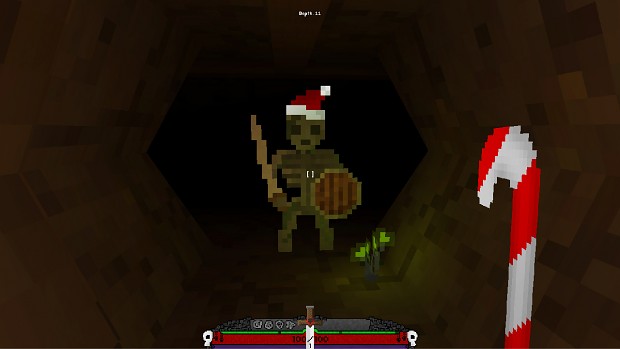 Hello and merry soon-ish christmas everybody.

Here I deliver another update to Dungeon Prospector and it's changelog is:

Added 'x' button to chest window.Added worm egg which spawns small worms when you get close.Added 3 items.Added 2 combinations.Added gem's bonuses can now be stacked via combining. Infinitely. Changed stairs block a bit, so it would align better with cave themed blocks.Changed how themes change with depth: 0-10 dungeon, 11-20 cave, 21-inf dungeon/cave odd/even.Fixed boss health bars not displaying correctly.Fixed slimes of Slime King no longer stuck or spawn inside him.Fixed stairs block would not delete itself after player got far away from it (blinking of walls / z-fighting).Fixed dagger no longer reroll it's additional stats, when enhanced via crafting.

Also the game is discounted for a week, until 29 December.

This is most likely the last update for Dungeon Prospector as it's been more than two years of development and its time to move on :)

Thank you to everyone who supported us over that time.

EDIT:
*going through desura pages* Turns out descriptions of indieDB and Desura not linked together, well that was unexpected. Updated them to the ones on indieDB just now. Also the game is still listed in Alpha-funding category of Desura however it's not in alpha stage for more than a half a year now, that should be sorted out soon too.

We in the bundle yay!

Been over a year since an update, where is Dungeon Prospector at these days?

Just came back to check this out after several months away and it's looking awesome! Well done!

Oh, looks like I forgot to edit second description months ago. Fixed now.

It still says it receives one or two updates per month and you haven't updated it since June and it's now December...

You must understand that we are study at university. And we are preparing another game. We hope for your understanding! We are very ashamed!

Should you really be working on another game when you have a game that people have paid for and you haven't finished?

This project is on the first place for us. We are preparing a very big update, so there is a delay. Sorry.

Any chance of this working with Oculus Rift? Got my Oculus on its way and reckon this game would work great with it.

Do not plan to, sorry.