Dragon Fin Soup seamlessly blends genres to create a fresh experience: half story-driven tactical RPG and half high-stakes roguelike, with a pinch of crass humor and a heaping helping of murder & madness set in a procedurally generated fantasy world.

Meet Red Robin - a charming, yet raging alcoholic bounty hunter, who’d rather get into a bar fight than deliver baked goods. Players must take up Robin’s blades and set out across Asura, a lushly colorful fantasy world that sits on the back of an enormous space turtle, on a journey to discover the secrets of her bloody past. 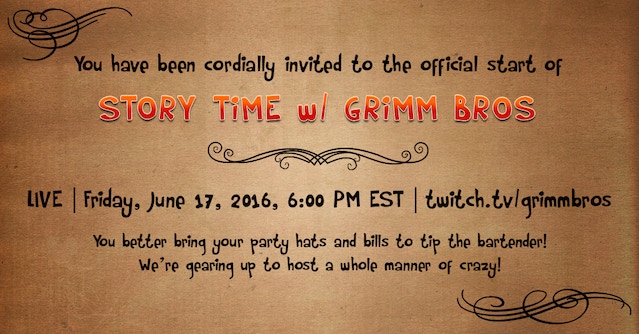 You’re invited to the kick-off of THE OFFICIAL GRIMM BROS TWITCH CREATIVE STREAM!
We will begin broadcasting several days a week all the madness that goes into indie game development!

GRiMM BROS is comprised of award-winning veteran developers and lots of other crazy talented creatives. Join us and experience the madness working in an indie game company!

Listen to JADE as she composes music for games, crafts tone, and makes melodies to set the mood. Grab your quill, fire up your imagination, and help RACHEL create the ever expanding lore and universe on Asura in the upcoming Novelette and Manga. Watch JESSICA work to make all the big bad plushies and other backer rewards for Dragon Fin Soup. Hang out with JIM: our interim CTO of Grimm Bros, as he programs and refactors the game code for the PSN ports and beyond. And pick your jaw up from the floor as you watch RANDIS, an internationally renowned and awarded concept artist, work on his next sexy piece! 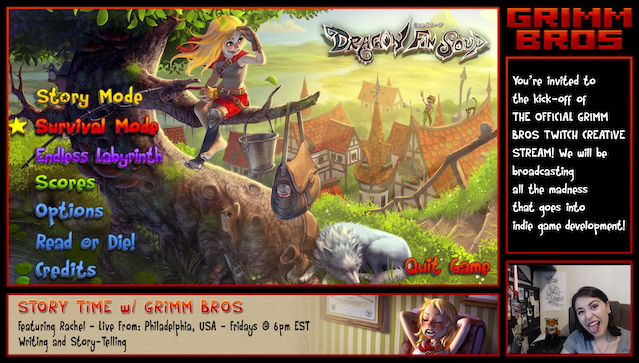 Holy S#!t I want to watch that but when? 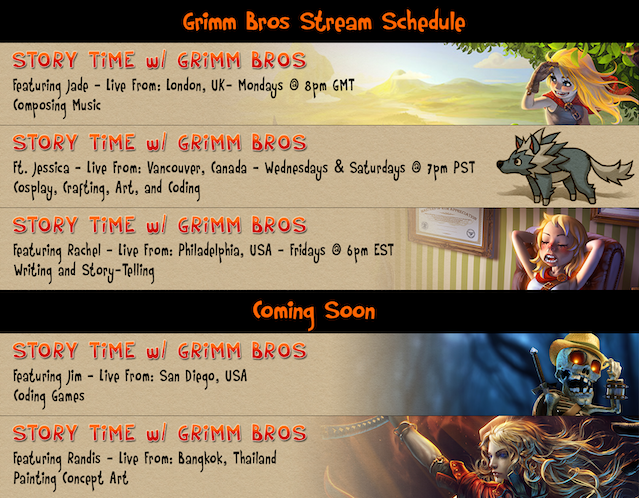 We’re gonna be silly, drink beer, and write this novelette! And guess what, we’re taking your input! So, if you’ve been thinking the story lacked the funked-up character rattling around in your head, then you better bring them Friday! And your puns. We’re gonna need LOTS of puns!

DFS composer, writer of dank flavoured beats, and occasional emotional cheese. Working on remixes, talking about composing for games, and teaching you how to play the melody!

Wednesday & Saturday at 19:00 PST
Story Time with Grimm Bros Ft. Jessica
Crafts and Cosplay
Join the grumpy Canadian in bashing out code, building cosplays, drawing character art, and attempting not to sew her own thumb while making plushies and other backer rewards. Spoiler: she’s going to sew her own thumb at least once. Prepare for blood. Canadian blood.

Grimm Bros will endeavor to do COMMUNITY-BASED GAME DEVELOPMENT for all our current and future endeavors. This means you will be able to watch, contribute, and shape the creative process. Ask questions! Suggest cool ideas! Tell us what you think and of course we will always accept more PUNS :) We want you all to know that you have a voice and that you matter to us. So, come on in chat, hangout, and join the chaos. We hope to see you there!

Thank you all for your support of Grimm Bros and indie game development.
Best,
- Ash & Randis

Stiiiiill waiting for my Linux copy.

super polished, really liking the look of this

Thanks! Any chance you can post this news to the main page? :)
Its a really big announcement for us!

dont not sure why it wasnt