The Battlefield franchise enters a new era equipped with more firepower, modernized weaponry and vehicles, and a deeper infantry experience from the jungles to the beaches of Vietnam. From villages on the Ho Chi Minh Trail to the city streets of Hue wage modern warfare as the United States or North Vietnamese Army (NVA). Select from a variety of characters within the different soldier classes as you command powerful new vehicles including attack and transport helicopters, the M551 Sheridan tank, and the F-4 Phantom fighter jet on the U.S. side and the Russian-made T-54 tank, the MIG-21, and Mi-8 multipurpose helicopter on the NVA side.

Go to war in new dramatic battle scenarios including leading a squadron of helicopters in an all-out attack on an enemy compound, executing an ambush of enemy soldiers from dense foliage, captaining a PT boat through a dangerous jungle river passage, and more. Grab your M-16, ready the Napalm, and prepare to enter some of the fiercest battles of the Vietnam War.

Operation Remembrance V1.1 Is On The Way!

Hey, everyone, I'm back! I took a nice long break from working on Operation Remembrance and got back to developing it less than two weeks ago. I don't have a projected release date for V1.1 yet, because I have no idea how long it's going to take. There are a lot of in-depth features I want to change that will probably take a long time to do.

Even though I can't give an estimate of how long it's going to take, here's a list of features that are planned to come with V1.1:

-Fixes for certain handweapon/small arms animations that currently sometimes cause iron sights on some weapons to not line up correctly.

-Three new aircraft from the Eve of Destruction mod: the A-4 Skyhawk, F-5 Freedom Fighter, and F-105 Thunderchief.

-Completely revised fixed-wing aircraft weapon loadouts. Missile and bomb models are now to the correct scale and aircraft carry realistic amounts of missiles and bombs based on information on what types of weapons a given type of aircraft could carry and maximum amounts based on weight.

-New ground vehicles from Eve of Destruction, as well as improved versions of existing vehicle models:

-A new Sampan model fitted with a DShK machine gun, imported from Eve of Destruction. Bots can actually use it!

-A COMPLETELY revised vehicle armor system. Weapons will now do an appropriate amount of damage based on their explosive content and armor penetration capabilities, and vehicle armor will provide the proper level of protection. This means that some vehicles will become much more vulnerable (for example, the BTR-60 and the sides of the M8 Greyhound will be immune to .30 caliber weapons fire but vulnerable to .50 caliber fire), while others will become stronger against certain weapons (the Greyhound's 37mm gun will no longer be able to penetrate the front or sides of the T-54, and so on).

-Modifications to existing maps to add in the new vehicles.

-Fixes for the AI on some existing maps to improve their performance and use of strategy. 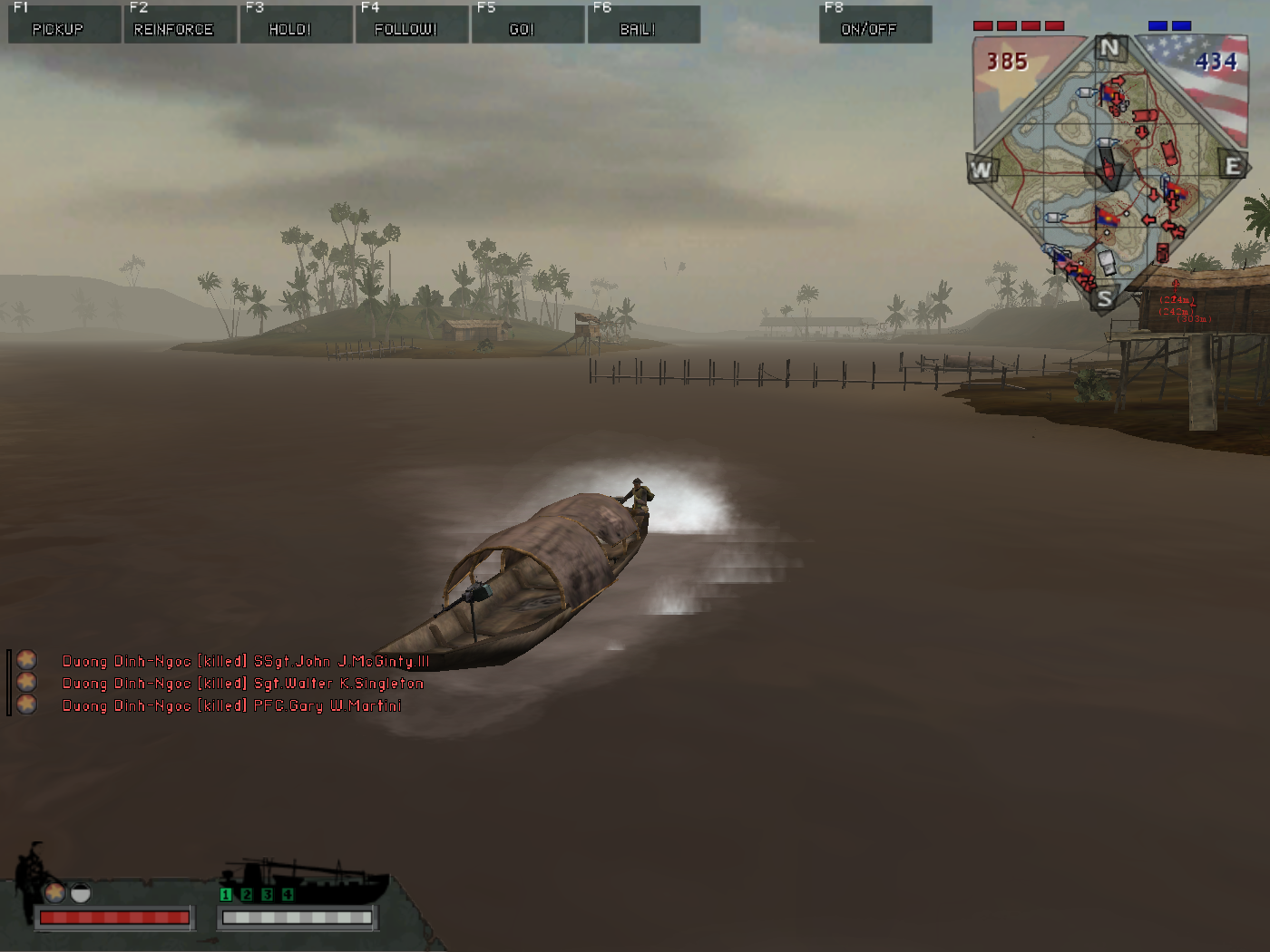 A Viet Cong Sampan with a mounted DShK moves through the Mekong Delta during Operation Game Warden. 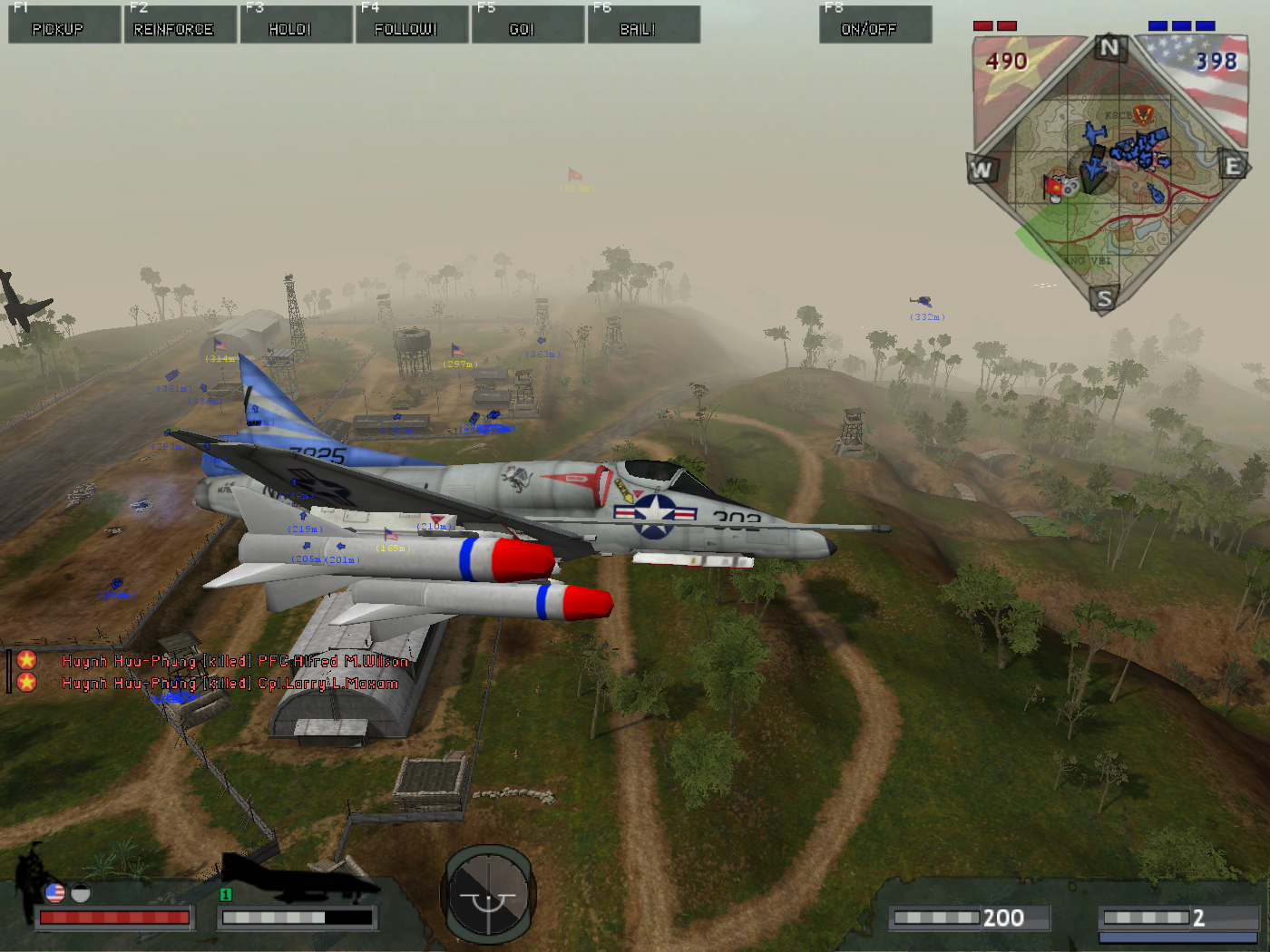 An update on current progress and a request to my fans from Australia and New Zealand.

It's been a little over a month since I posted my last update, so I thought I'd put this out to let people know I'm still here and give some new information...

Weekly Update Number 10 for "Battlefield Vietnam: Operation Remembrance": Things are going to be different from here on out.

Weekly Update Number 9 for "Battlefield Vietnam: Operation Remembrance": Current progress and a video showing off some REAL gun sounds in the mod!

These are patched files for the BfVietnam game executable/application and Battlefield Vietnam Server Manager 2.01. There are many important but also neat...

A patch to fix a number of issues that were missed in the release and V1.01 patch, including several problems and requests brought up by members of the...

-Multiplayer maps for Battlefield Balkan mod- Eventual bugs or crashes to desktop, might be possible.

They will give you a medal G.I... but only after you are dead.

Cant anybody make us a female characters for this game ? I wish I was a modder!

There aren't any characters in this game. And usually women and war don't mix.

Is it safe to install from here

Anyone know if anyone ever did a reskin or texture or whatever that took the sleeves off the U.S Army uniforms?

That bad they did not add expansion packs