Enter mankind’s greatest conflict with Battlefield V as the series goes back to its roots with a never-before-seen portrayal of World War 2. Lead your squad to victory with new ways to turn the battlefield to your advantage. Assemble your Company of customized soldiers, weapons, and vehicles – then take them on an epic journey through the Tides of War. Experience the most intense, immersive Battlefield yet. You will never be the same.

World War 2 As You've Never Seen It Before

With Battlefield V, DICE returns to the era that started it all: World War 2. But it's a WW2 experience unlike any other. Characters, locations, and weapons of war are all brought to life through vibrant, modern visuals and cutting-edge storytelling. Taking inspiration from the lost pages of history, you'll find yourself immersed in iconic WW2 action – from paratrooper assaults to tank warfare – in battles that were pivotal, though sometimes forgotten, in the early days of the war. This is not the World War 2 you've come to expect. This is Battlefield V.

New Ways To Turn The Battlefield To Your Advantage

Utilize the battlefield in a multitude of unexpected ways to lead your squad to victory. Build fortifications, repair war-torn structures, or tow stationary weapons to maximize their devastating firepower. Enhanced immersion allows you to see and feel the force of an explosion, drag a downed ally to safety, or shoot an incoming grenade out of the sky. Squad play is deeper and more rewarding than ever. Deploy as a team, rely on your individual strengths, and call in game-changing Reinforcements when the situation is desperate.

Soldiers Who Look And Play The Way You Want

Your journey through the world of Battlefield V starts with your Company – where every soldier is unique. Create and customize soldiers, weapons, and vehicles, covering the way they look all the way to how they play. From the signature multiplayer modes, to the cooperative Combined Arms, your Company always stands with you – ready to fight – evolving over time together with you on your journey.

An Epic Voyage Through The Tides of War

Tides of War is the grand journey of you and your Company of soldiers through the unsung, unexpected battlefields of World War 2. Beginning with the Fall of Europe, then taking you further into mankind's greatest conflict, the Tides of War make Battlefield V a continuing voyage, with new battles, fronts, and rewards on the horizon – for all Battlefield V owners.

War in the Pacific

Are you ready to take part in a Pacific invasion across land, air, and sea? Available on October 31, Chapter 5: War in the Pacific brings amphibious assaults and all-out warfare across iconic battlefields, with the U.S. and Japan entering the fray. 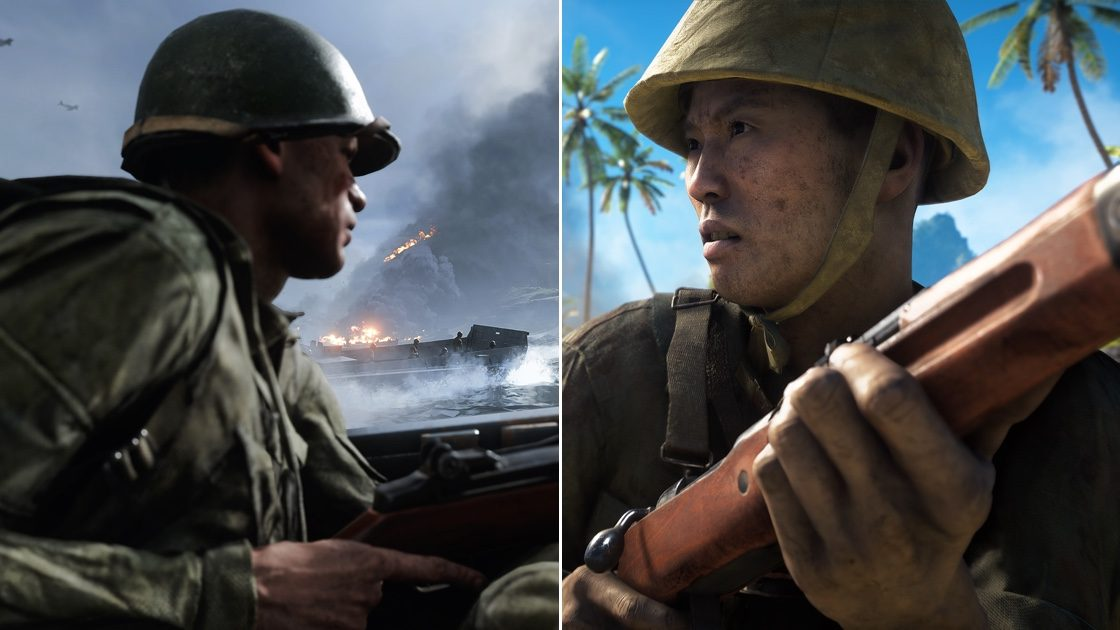 Two New Factions
The American forces charge inland towards unwavering defenses, as brute force tactics clash with the Japanese home ground advantage. In Chapter 5, you’ll get to fight as the U.S. Armed Forces or the Imperial Japanese Army. Deploy with their respective iconic military hardware and equip your Company members with unique outfits to stand out on the battlefield. 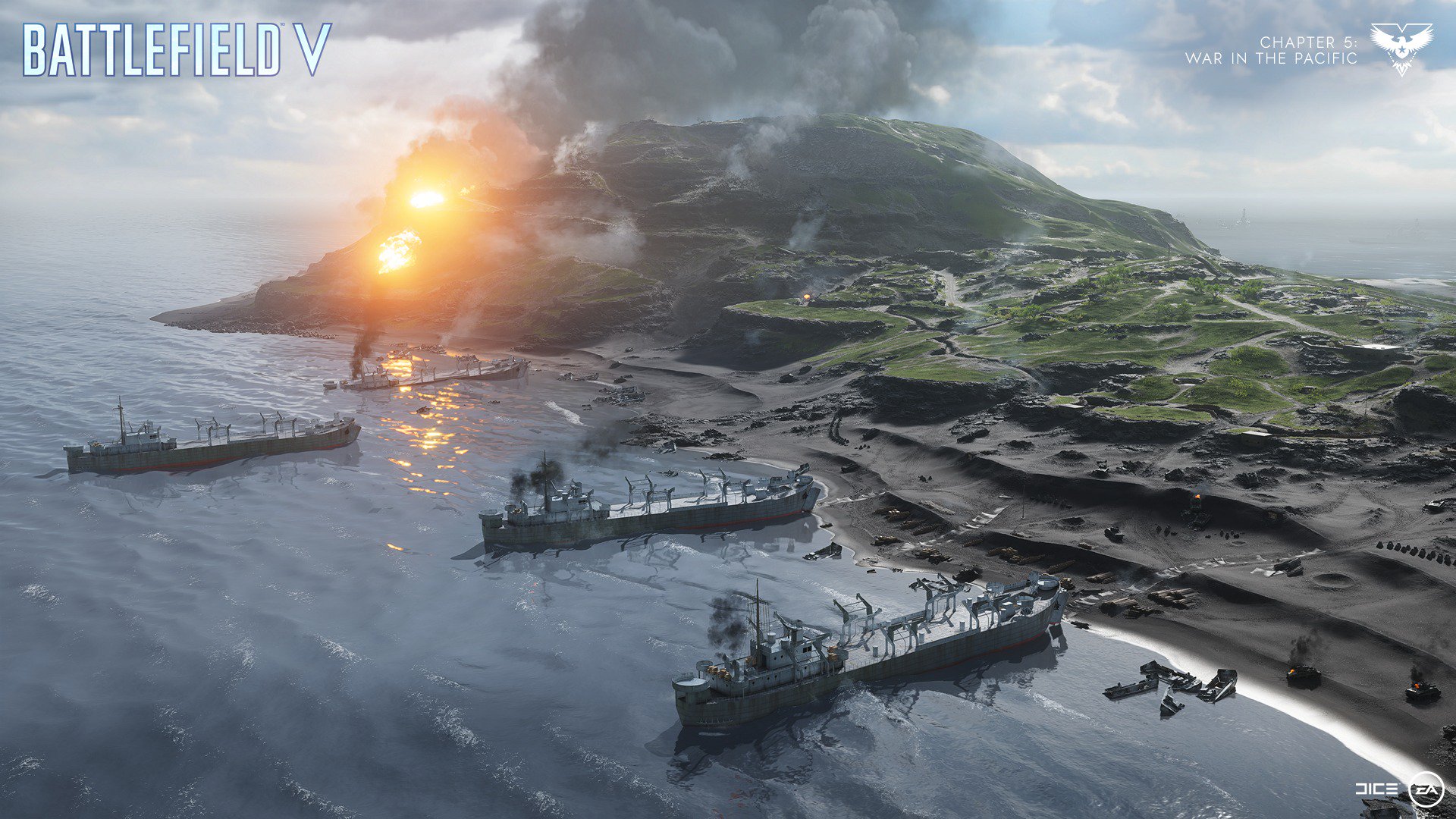 Iwo Jima
The U.S. is attacking Iwo Jima on all fronts, and in this beachlanding mayhem you’ll be engaged in a fight over the thinner part of the island. It’s an all or nothing clash across wide-open black beaches and close-range environments like the tunnels of the mighty Mount Suribachi, inviting you to an iconic king-of-the-hill battle. Landing boats, aircraft, and tanks are plentiful, and each can sway the match in their own way. Push the enemy towards the final objective or hold back the onslaught on this highly dynamic map. 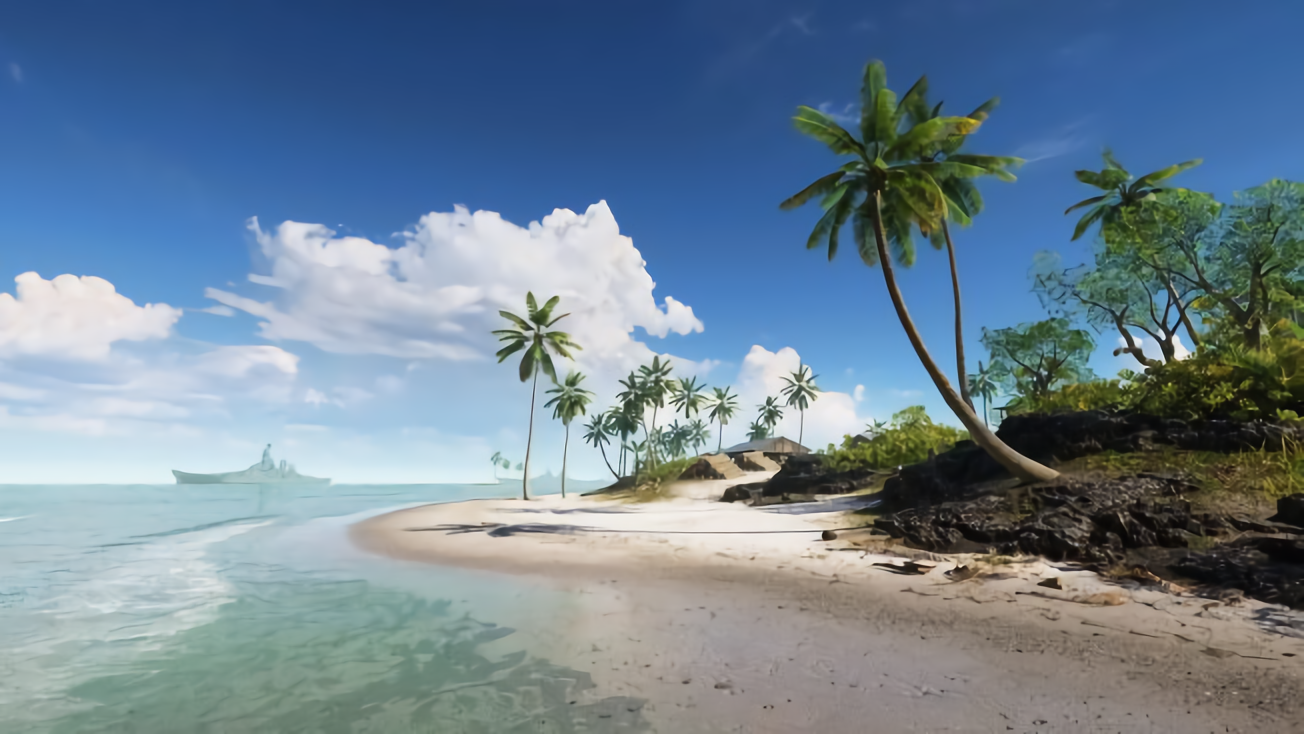 Pacific Storm
The weather is as treacherous as your foes on this set of islands where a game-changing storm may roll in, reducing your sightlines and evolving the battle. Move between islands with your squad and secure the control points using boats, amphibious tanks, or aircraft. As you attack or defend across land, air, and sea – stay on your toes! You never know what’s around the next ridge. Fans of Battlefield™ 4 will see shades of the classic map Paracel Storm in the world of possibilities offered through Pacific Storm’s layout. 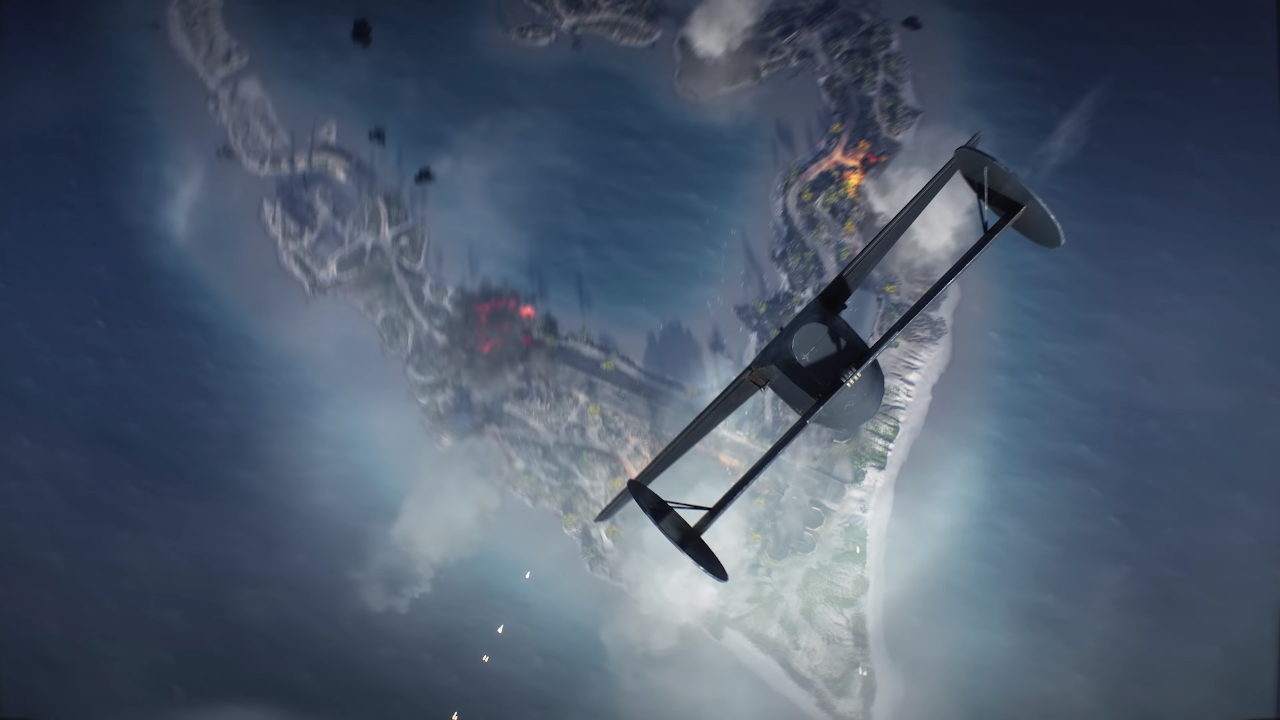 Wake Island (Coming in December)
Arguably the most legendary map since the dawn of Battlefield™, Wake Island arrives to Battlefield V in reimagined form in December. The map’s iconic, horseshoe-shaped layout ensures dynamic changes to where the action will be – though the Airfield and other areas granting vehicle access are sure to be constant focal points. Keep on the move to win the battle. Use Fortifications to create chokepoints and lure enemy forces into kill boxes. Do everything it takes in this war-ridden tropical setting to conquer the island, the skies, and the waves. 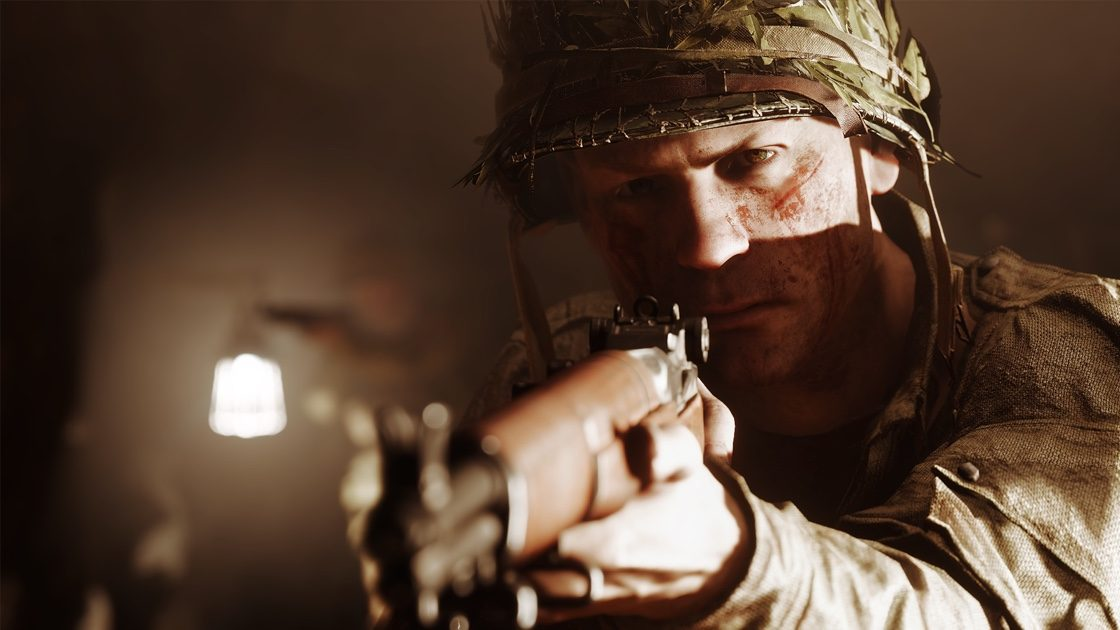 Deploy with New Weapons
In Chapter 5, you’ll wield classic WW2 firearms, katanas, and anything in between. Yes, you’ll be able to enjoy the distinctive eighth-round “ping” from an M1 Garand when the Chapter launches, along with three other main weapons.

The first of these is the Type 99 Arisaka. Available for the Recon class, this weapon is based on one of the strongest military bolt-action rifles ever manufactured. Medic class players will be able to deploy with the Type 100, a Japanese SMG, which will come in handy in close quarters thanks to its rate of fire and control. Finally, there’s the powerful M1919A6, a medium machine gun for the Support class. Use this belt-fed beauty to suppress enemies from medium to long distances and, as with all Battlefield V main weapons, unlock and choose the right Specializations to make it fit your playstyle.

As the Tides of War continue, Chapter 5 will bring the M3 Grease Gun, Nambu Type 2A, Type 97 LMG, and M1918 A2, too. Handed out as a Chapter Reward, the Jungle Carbine can be added to your arsenal, too – the same goes for the Type 94 and the Model 27 sidearms. Finally, Tides of War will expand the Assault class’s arsenal with an explosive gadget: the tank-busting Lunge Mine. 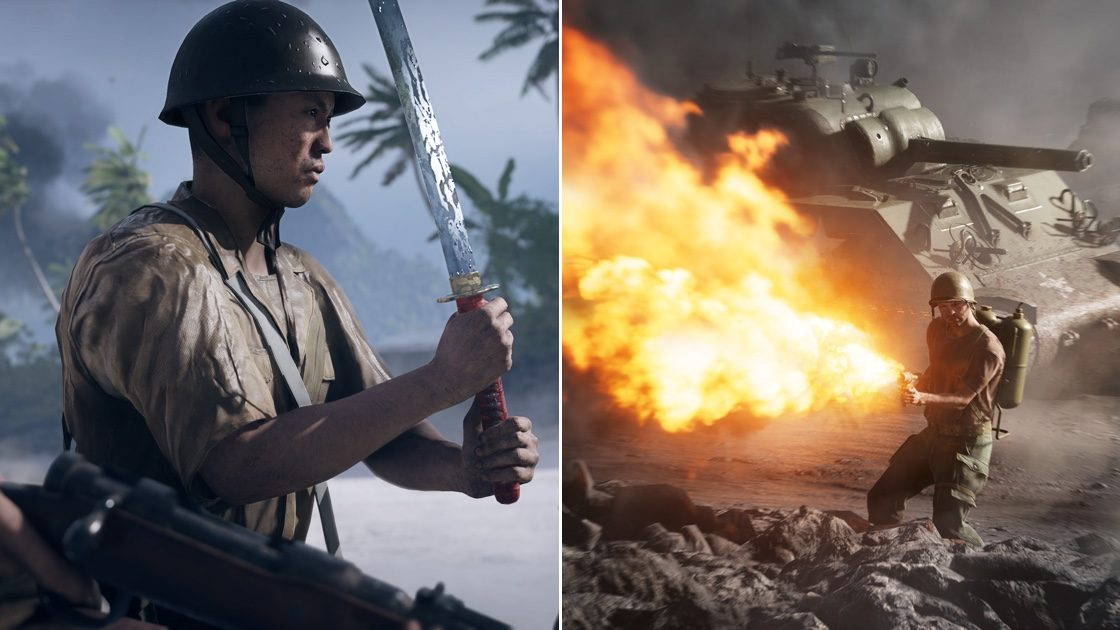 Two New Battle Pickups
The previously mentioned katana is a Battle Pickup, meaning it needs to be found on the battlefield to be equipped. Both factions can use this time-honored melee weapon when the action gets close and personal. Chapter 5’s other Battle Pickup is the M2 Flamethrower, and its man-portable backpack design will make you highly effective against groups of enemy infantry. 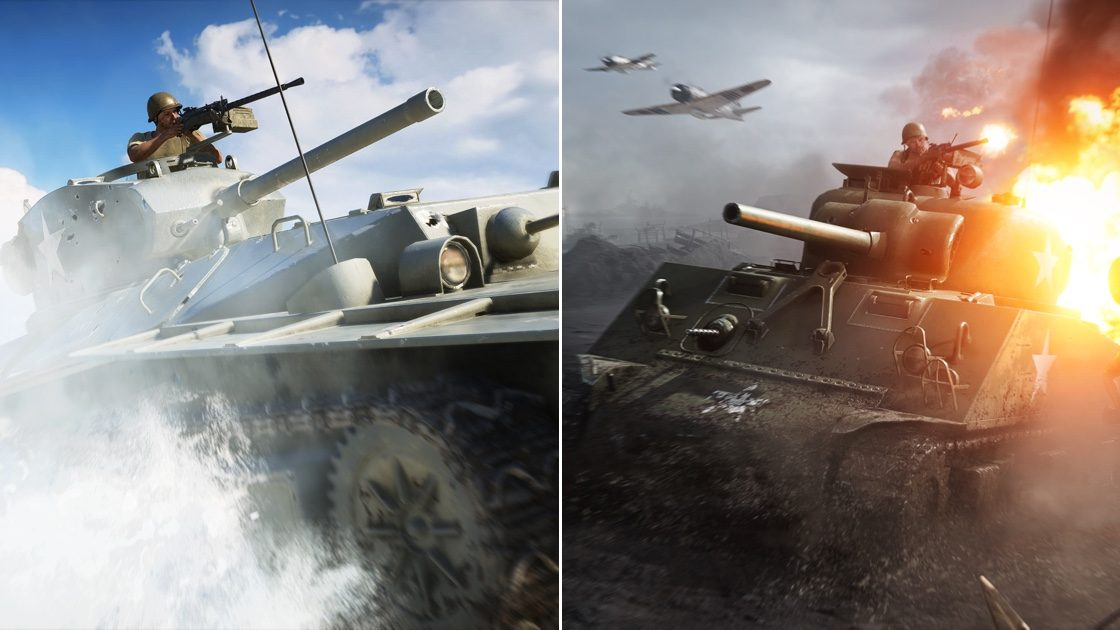 Pilot Iconic Vehicles
The legendary M4 Sherman is a medium tank for the U.S. side with sturdy armor and decent speed. Use the main cannons, machine guns, and sheer massiveness of this steel beast to support your team and win the objective. The Japanese equivalent is the Type 97, a tank with similar characteristics. Man its 57mm main tank gun (or higher-caliber cannons if you've unlocked the Specializations!) to take care of the invading forces and wisely use smoke and repairs to survive.

Immense firepower is one thing. But getting from A to B is crucial to PTFO, too. The agile LVT and Ka-Mi Light Amphibious Tanks take you across both land and sea, granting many new strategic options for securing your objectives. The Dinghy is another fast (but more vulnerable) way to get across water. When you need quick access to the action – or a hasty escape – jump into the MB Jeep or the Type 95 car.

Want to rule the sky? Your U.S. Company will be able to pilot the F4U Corsair, which comes in both a Fighter and Bomber variant. Pacific air space will also be occupied by the Japanese Zero Fighter, which comes in the same two variants.

Unlock and choose Specializations to make your vehicles even more efficient and fitting for your play style. With Chapter 5, we've added even more branches to the Specialization trees of the new land and air vehicles, giving you more variety. 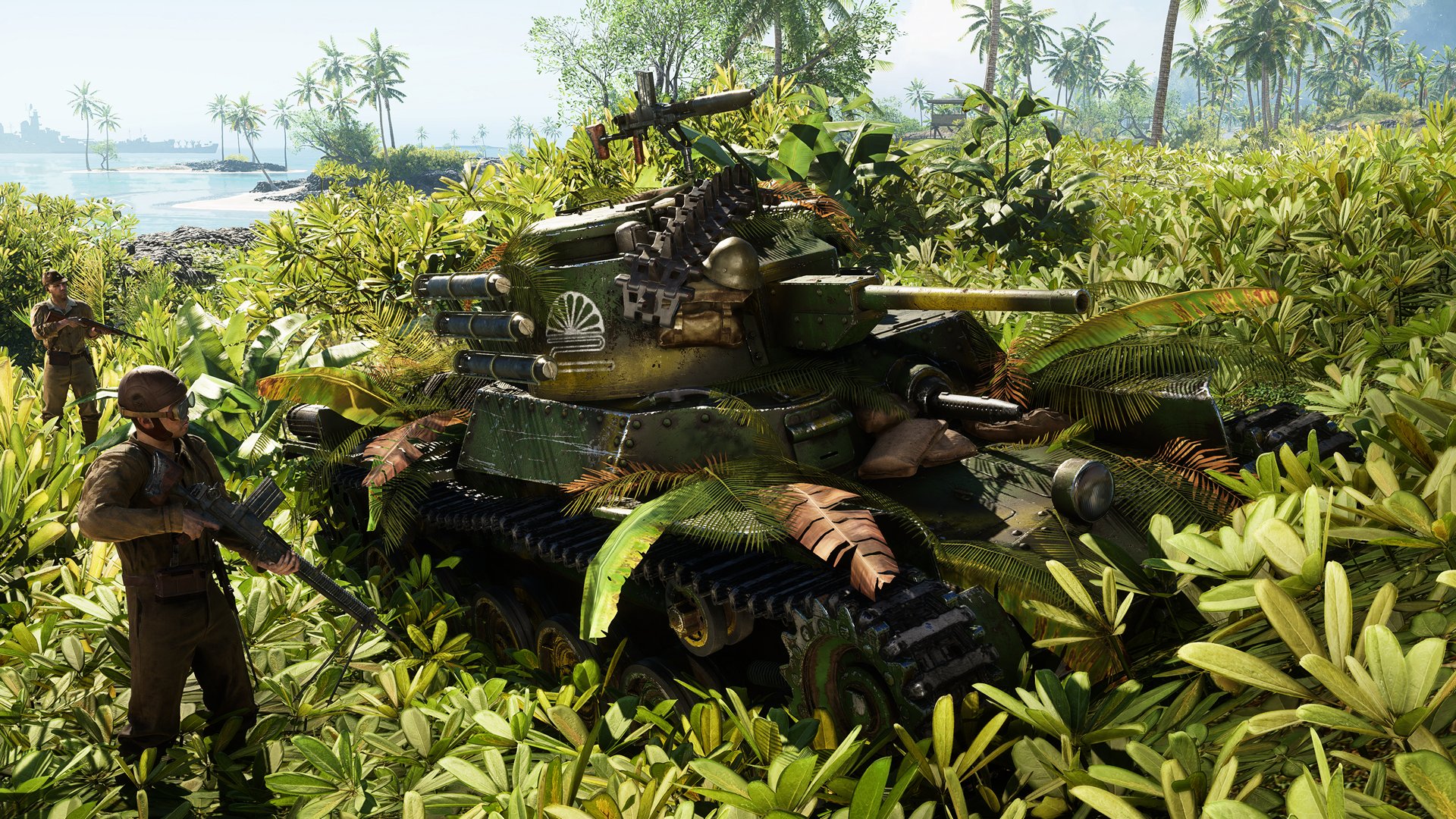 Earn Chapter Rewards
Every battle is its own reward – but there’s even more in it for you. By simply playing Battlefield V during Chapter 5: War in the Pacific, you’ll earn Chapter XP and climb the Chapter Ranks. Each new rank earns you one or more Chapter Rewards like weapons, soldier outfits, weapon skins, melee weapons, Special Assignments, and more.

With Chapter 5, we’ve sweetened the pot for the Chapter Rewards even further. The Jungle Carbine primary weapon, the Epic Nighthawk outfit, and the Model 27 sidearm are some of the many rewards you can reap when getting experienced in the Pacific.

It’s a new year for Battlefield™ V. And a second Chapter for the game is about to strike. Whether you’re a player new to Battlefield V or a veteran...

Deep dive into tweaks and fixes coming alongside new content like The Last Tiger War Story and the Panzerstorm map.

A Summary of the Battlefield V Launch Notes

The road to Battlefield™ V has been one of iteration and fine-tuning, together with you, the community. We’ve learned a lot from our Closed Alphas...

This is Battlefield V

Allow us to reintroduce World War 2 like you’ve never seen or played before in our latest trailer.

FrostyModManager is a mod manager for Frostie Engine games

such a good franchise to get ****** over by good ol money hungry EA with their heads in SJW laps. DICE's screwed.

You get good karma while the other guy gets bad karma. Which makes no sense.

Lol, everything can be hacked/modded, but BF5 is simply not worth any remotest sort of hassle, lul.

Oh boy, here we go. The worst Battlefield game ever made found it's way to ModDB. I don't understand why it is here, though, as we don't have any tools for creating Frostbite mods.

Yeah, but we can develop one

Why this game has a page on moddb?

this is embarrassing. looks like an MA15+ version of BFHeroes. Bring back AI Commanders and squad tactics with map and weapon variety, this looks like CODww2 DLC. Ashamed to have played so much BF1942 for this garbage to be its successor. Suck a big COD.

This cancer received It's page on Moddb I see. What a disgrace for such franchise

The sound design and graphics of this game are astonishing.