iSDGE is an open source 3D game engine for iPhone, iPad and iPod Touch. It is based on iOS 4 and under steady developement. Currently it only features rendering of 2D and 3D objects and no physics, audio or networking yet. It offers a flexible and easy to use shader system using OpenGL ES 2.0. A powerfull terrain system and a fast stencil shadow implementation. The focus is on speed and especially ease of use. The engine is mostly written in C++ and one small part in Objective-C. iSDGE features its own fast to load model format and comes with a exporter for Blender. 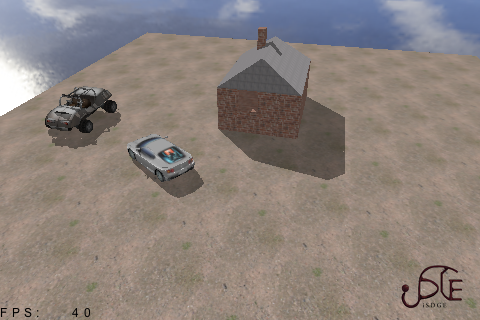 iPhone 3GS and newer have a stencil buffer which can be used since iOS 4. As I wanted a realtime shadow solution for iSDGE, I decided to use this possibility to impement shadow volumes. The silouette detection needed for this was very slow, but I hapily found a way to speed it up a lot. The bottleneck currently is the rendering of the shadow volume, as it changes all the time, which means that it also have to be updated for the gpu all the time.

However, the scene above has around 5k polygons and all of them throw a shadow, which is a result I am already quite happy with and something I wanted to show around, as I didn´t yet see stencil shadows on the iPhone, except some demo created be apple.

iSDGE finally got a blender exporter which makes creating models for it with blender as easy as it can be.

Oh and one more question. When are you planning to release this beast of an engine, cant wait :D

You can already pull it from the git repository on sourceforge: Isdge.sf.net
A first realease will come as soon as I implemented animations, which probably still takes a few months.

Do we have to pay for this engine if we want to use it?

No, the engine itself is licenced under MIT, which means that you can basicly do whatever you want with it for free. It however utilizes some third party libraries, which is currently only bullet, which is licenced with the zlib/libpng license, which is a little more restrictive than MIT, as it asks you to mention that it ois used, or something like this. For more information about the licenses, just put their name into google and you will find the license texts.

Looks good! Might be on this page, so sorry for asking, but will this engine be Windows compatible?

As I plan to add Android support somewhen in the future, it should also be able to develope with iSDGE on Windows. And if it turns out to be extremely easy, it may also gets a Windows and/or Mac port for quick testing.

Interesting engine. Is that cell shading on the landscape picture?
*tracks engine*

Fantastic! I'm looking forward to seeing where this project leads!

Mod SDK & Community
Built a game for iSDGE and want to support mods? Try mod.io, a cross-platform mod SDK created by Mod DB which makes it easy to get a mod community up and running in-game. Currently seeking games to integrate and promote