We have received a small number of issues after last week’s playtest release. These issues have been addressed and so we are releasing a new playtest for you to check out!

The list of fixes is agreeably short, which is to be expected after this equally short development cycle. The fixed issues include:

For the full changelog, please refer to the changelog page on our wiki.

The installers for a number of supported operating systems can be found on the download page as usual.

If you encounter any problems or bugs, don’t hesitate to report them on our bug tracker.

A note to modders: You may have seen these already on the wiki or when we linked to them in the last playtest announcement, but we did not explicitly mention them. In addition to the existing trait and Lua API which cover the latest stable release, we now also provide documentation for the latest playtest. See the “Traits (playtest)” and “Lua API (playtest)” pages on our wiki. This will allow you to update your mods and maps to be compatible with an upcoming release ahead of time. 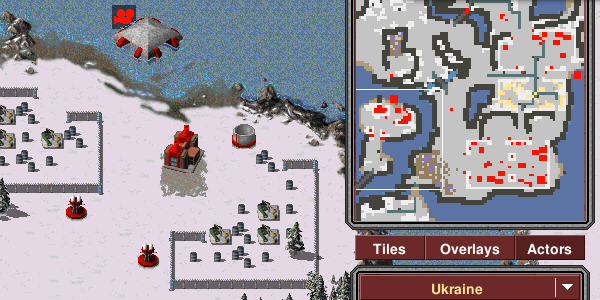 A view of the new ingame editor in the Red Alert mod.

The old external editor is slated for removal after the upcoming release, so while the next release will feature both the ingame and legacy editors, it will be the last appearance for the latter. Reason enough to give the ingame editor a thorough testing!

Can you confirm a release date for Tib Sun OpenRa Mod At This Point?

i was wondering is there any way to make custom maps for skirmish mode in the other OpenRA mods?

Yes, the map editor is available in every mod's main menu, under Extras.

The game seems to hit lag spikes occasionally. Is this expected?

No, that is a performance related bug you should investigate and report at Github.com.