We've released multiple updates within the last 2 months without any news posts, so we figured it's time to explain the changes. 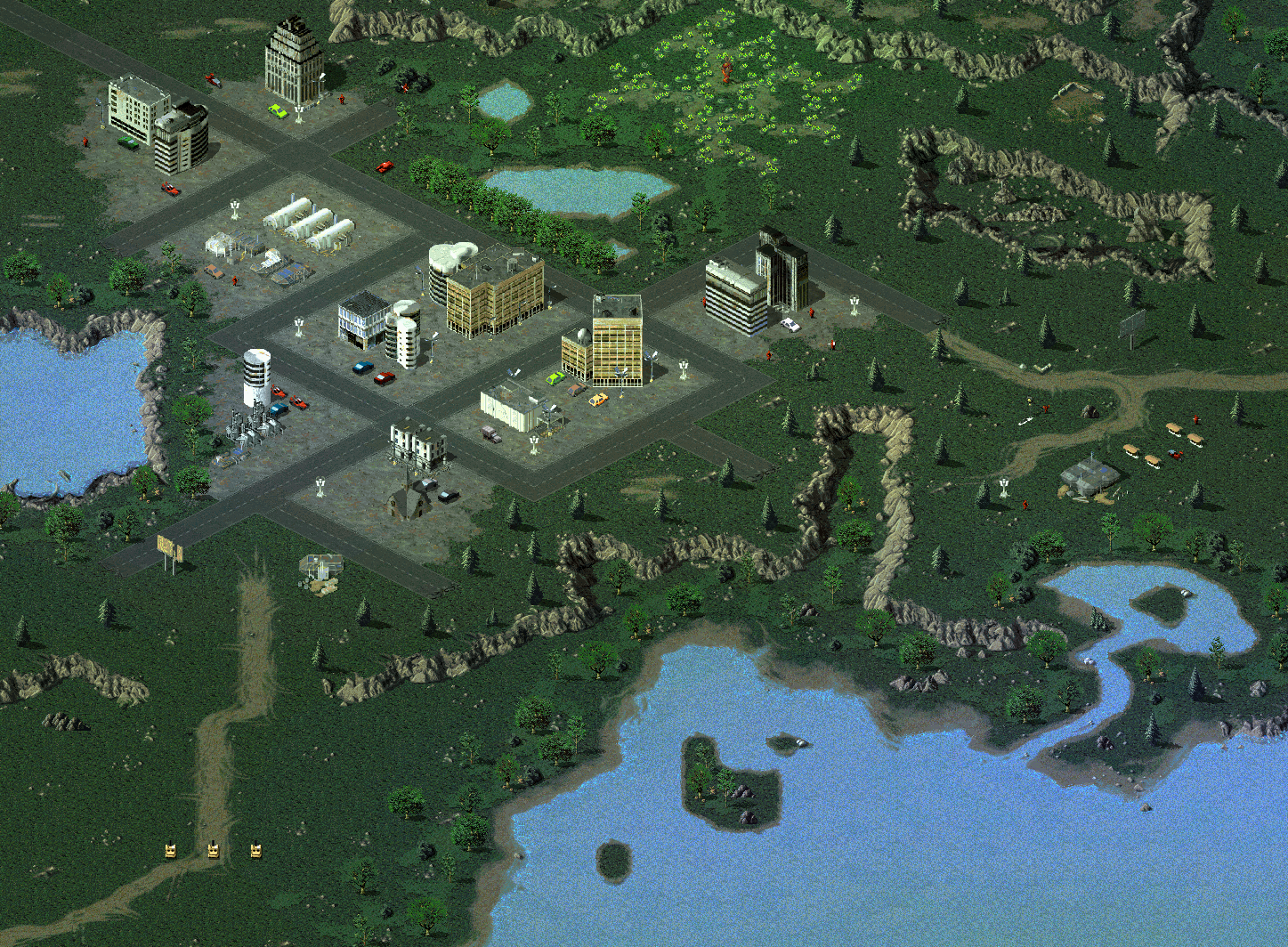 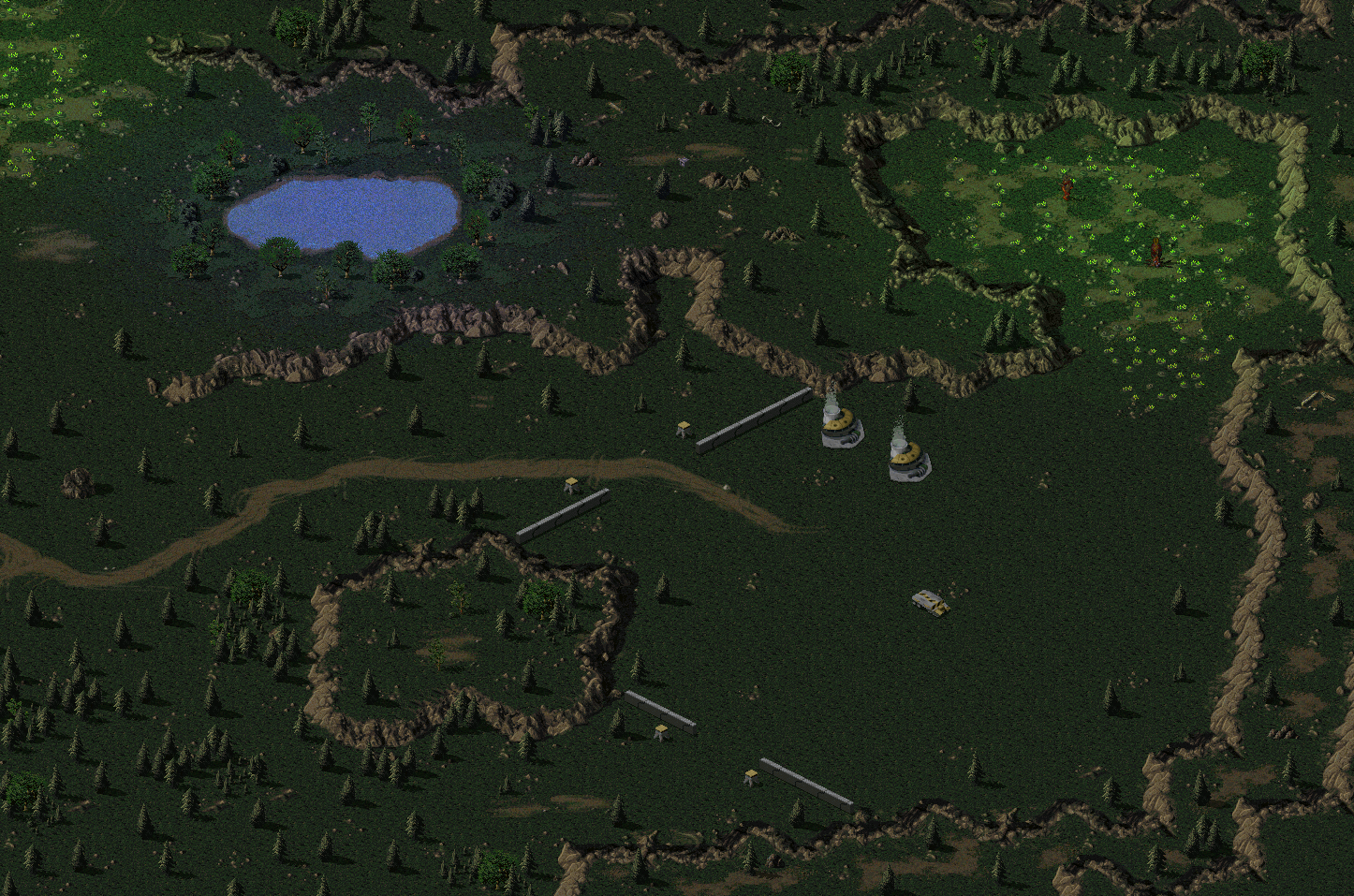 However, despite such general improvements and additions, the biggest highlight of our latest updates has been naval combat. Our 3D modeller Lin Kuei Ominae created 9 new ships, making it possible for us to entirely re-design and re-implement the naval arsenals and balance for each side. Here are the revised naval units of all sides, along with descriptions:

Gunboat: The basic combat ship of GDI, fairly expensive but effective against other naval units. It is mainly used for protecting your more fragile Missile Cruisers and Aircraft Carriers from opposing naval units and aircraft, although it can take out coastal land targets as well.

Missile Cruiser: Armed with long-range missile launchers capable of dealing high amounts of damage to any target from a distance, the Missile Cruiser is GDI's support ship. By clicking it while it's selected or by pressing "D" on your keyboard, it will do a sonar sweep that reveals all submerged and cloaked units in its vicinity. It has low hitpoints and its arcing missiles are easily dodged by moving enemy units, so to be effective it requires protection from Gunboats, especially against fast enemy ships like Nod Scarabs.

Aircraft Carrier: The capital ship of GDI fires remotely controlled drones that bombard its enemies. It has the longest range of all units in DTA, and is especially effective against enemy structures. Use it to bombard enemy bases from far away. The Aircraft Carrier is also able to deploy, allowing it to reload A-10s and build up to 5 stronger drones with infinite operating range. In addition, the Carrier works as a sensor array when deployed, making it possible for it to detect nearby enemy submarines, sea mines and deployed Laser Corvettes.

Scarab: A very fast and inexpensive boat equipped with a chaingun. While it deals notable damage against naval units, it's not very effective in direct combat and so it's best used for quick hit-and-run attacks in small groups. The Scarab is also able to fire at aircraft, so use it for defending your Laser Corvettes and Sea Shadows against those pesky Orcas and Longbows.

Laser Corvette: A fairly fast ship equipped with a laser weapon similar to that of the Obelisk of Light. It is able to defeat almost any other naval unit in direct combat if it gets close enough. As a special ability the Laser Corvette is able to deploy, enabling it to function as a sensor array and giving it stealth capabilities, which makes it ideal for setting up ambushes.

Sea Shadow: Nod's capital ship fires long-range cluster missiles that deal large amounts of damage to all targets on land. Use it to level enemy bases from distance.

Destroyer: The basic combat ship of Allies. It is fairly inexpensive and mainly used against other naval units. The short range of its cannon makes it ineffective for attacking bases, so the Destroyer is usually seen protecting the more fragile Frigates and Cruisers.

Frigate: Allies' support ship. It has medium-range missile launchers that deal mediocre damage against all targets. Its low hitpoints make it poor in direct combat, but its low cost, range and anti-air capabilities make it the perfect support ship for the Destroyer. The Frigate is able to deploy, allowing it to function as a sensor array and thus detect nearby enemy submarines, sea mines and deployed Laser Corvettes.

Cruiser: Like in Red Alert, the Cruiser has very long range and is scaringly effective against structures, especially in deployed (combat-ready) mode. Large buildings like Refineries and Construction Yards are destroyed within seconds. Due to its cost, inaccuracy, and low speed, the Cruiser is very vulnerable to opposing naval units and should be protected by Destroyers and Frigates.

Submarine: The basic naval combat unit of the Soviet Union. Like all Soviet naval units, it travels underwater and so it cannot be detected by enemies unless it moves too close to a sensor array or sonar sweep. It can also do a sonar sweep itself to reveal enemy submarines, sea mines and deployed laser corvettes, but in doing so it will also give away its own position and that of friendly submarines that surround it. The Submarine's powerful torpedoes allow it to beat most ships in direct combat, but its low hitpoints and low range means that a group of Submarines is easily destroyed by long-range ships if exposed. The Submarine is capable of attacking land targets with a small cannon, but the cannon is weak and thus rarely useful on its own.

Project 941: A huge missile submarine. The low range of its torpedoes make it mediocre in direct combat, but what makes the Project 941 powerful are its missiles. When deployed, it fires bursts of missiles upwards to the sky, which shortly after rain upon its targets, causing massive area damage that no other unit in DTA is able to reach. Because the 941 is an experimental submarine, players can't have more than one of these on the battlefield at the same time.

Sea Mine: A slow and cheap remotely controlled floating mine. If it reaches an enemy unit, it will self-destruct, causing significant damage. The Sea Mine cannot take any damage before exploding, so a smart enemy can easily prevent their damage by using sensor arrays and sonar sweeps. 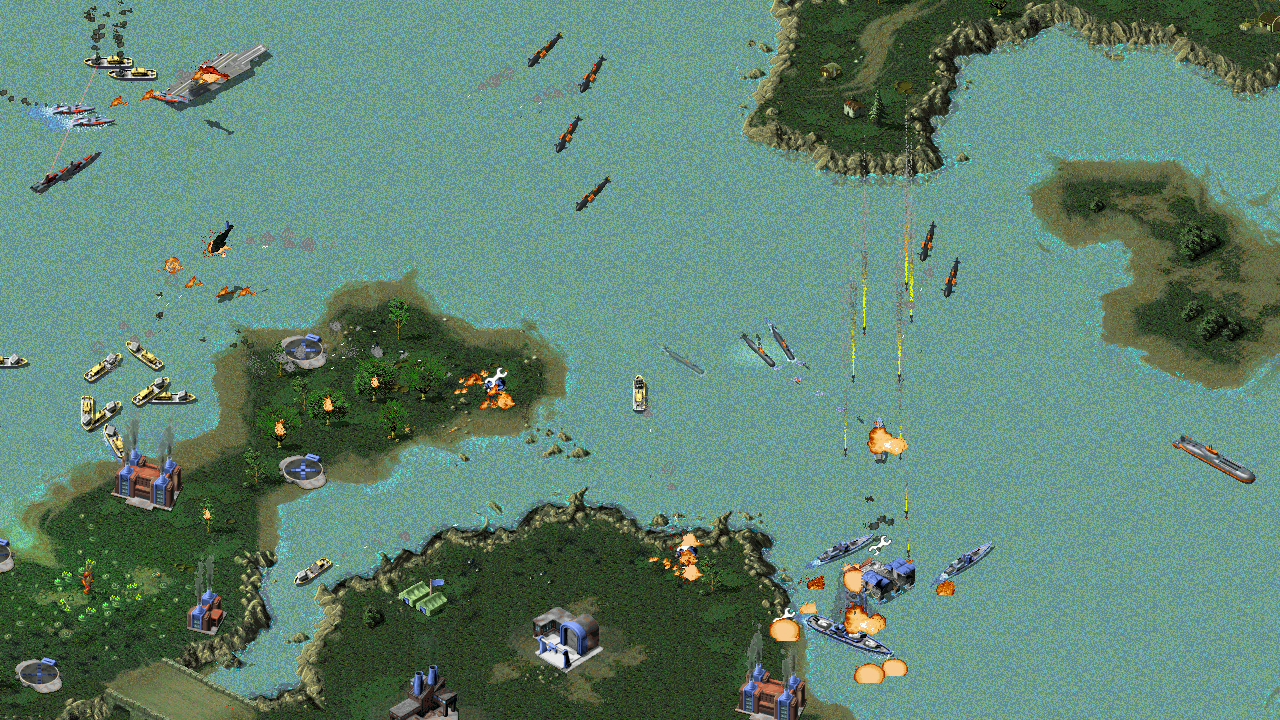 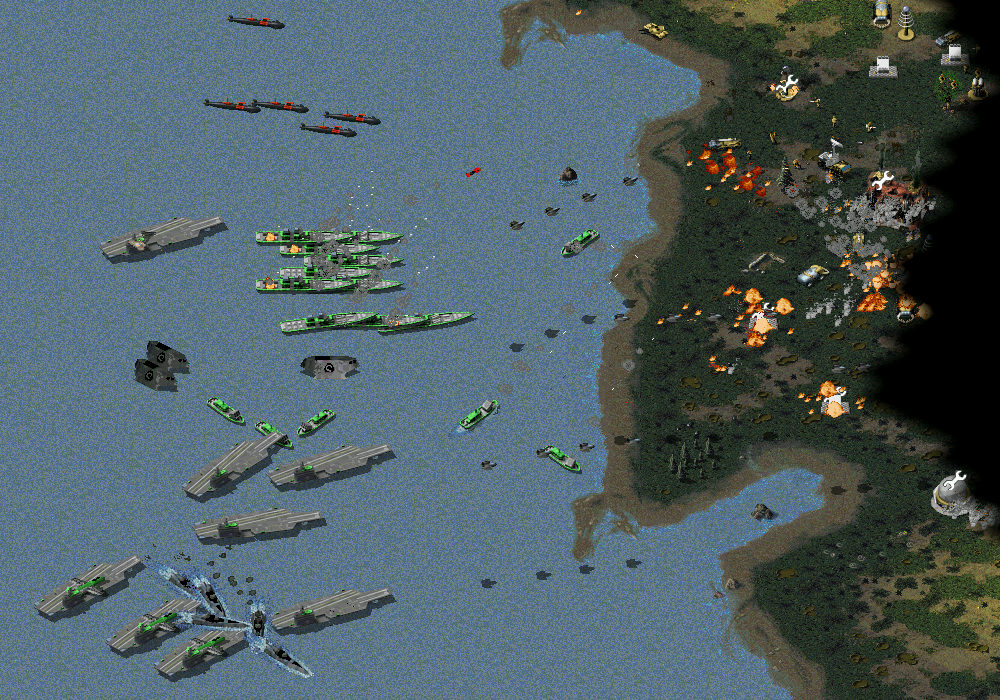 We hope you enjoy our revised naval combat as much as we enjoyed implementing it! For you to have more fun with the new ships (and everything else in the game), we went and also created 7 new default mode multiplayer maps for your entertainment. 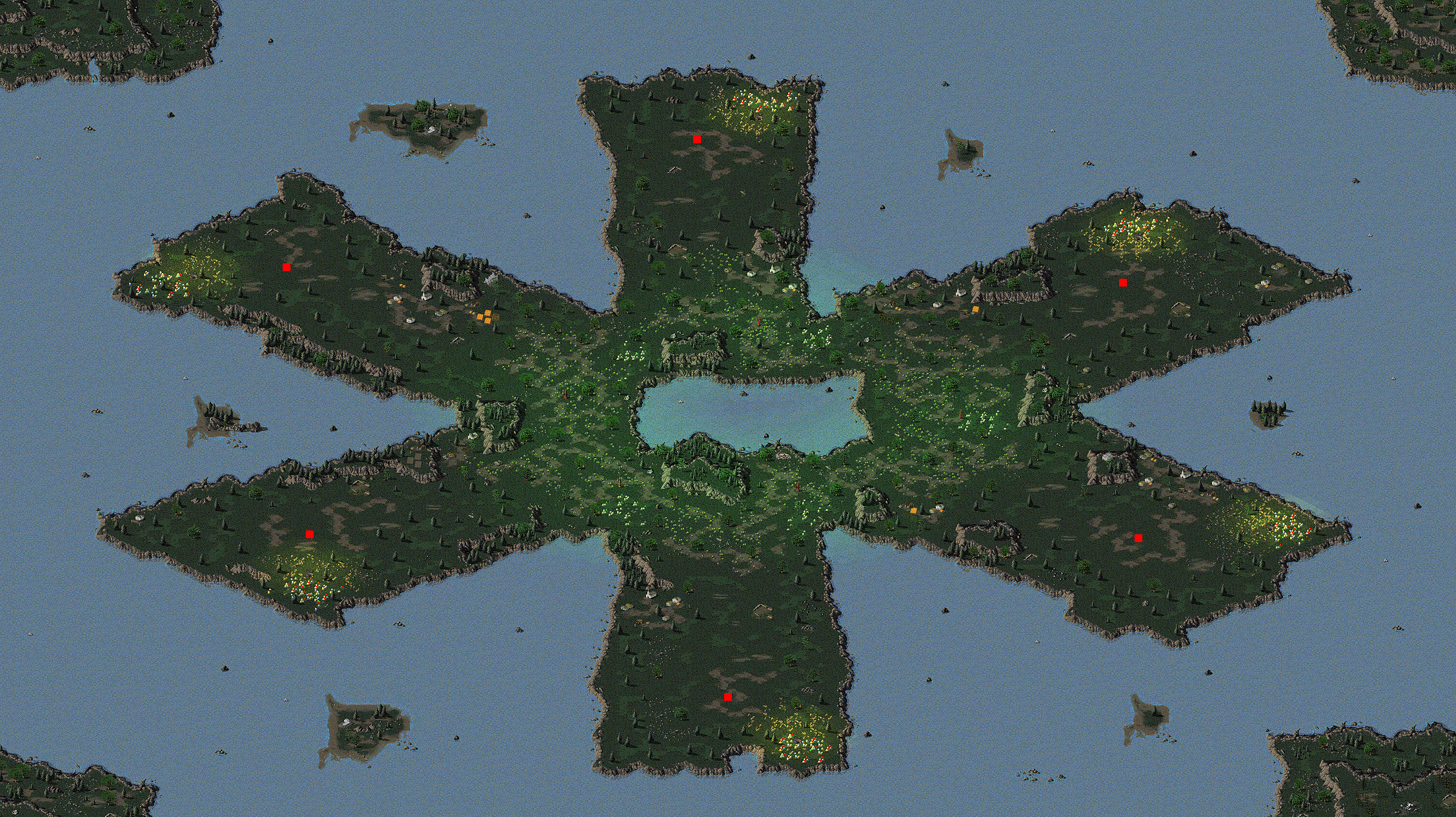 It's also worth mentioning that when a player doesn't have a map that's selected by the game host, the map is now automatically transferred to that player, meaning you'll now be able to put the included map editor to good use.

To read the full change logs for our latest updates, visit the change log page.

See you on the battlefield, commanders! We've had decent daily online activity at CnCNet ever since we released DTA 1.13, so if you want some multiplayer action but lack friends to play with, go check it out!

Awsome units, I always loved naval comabt in this mod. Now that every faction is getting much more unique at it, I will play naval maps all day long!