Wolf3D Demolition V2 is a gameplay mod for Wolfenstein 3D and Spear of Destiny, using Linuxwolf's fork of ECWolf. Like the previous version, this adds damage types, as well as new weapons and death frames to demonstrate them. The previous version had 3 new weapons: the Bazooka, the Flamethrower and the Gas Grenade Launcher, as well as a few new randomized enemies to show these weapons off. In this new updated version, there are even more dangerous and destructive weaponry, as well as even more types of Nazis to blow up!

The Weaponry
Aside from your normal Wolfenstein armory (with new sprites, adapted from the ROTT specs and the lost episodes), there are many new weapons that will randomly spawn in the spots where machine guns and chain guns used to spawn.

Dual Pistols - 2 pistols are better than one. Nothing makes you look like a pure badass like wielding 2 pistols and charging head-on into a room full of Nazis.

Mega Chaingun - Maybe that room had a bit too many. Never fear with this thing. Eats ammo at a crazy fast rate, but will clear a room faster than you can say Gesundheit!

Bazooka - Your standard missile launcher. Pummel your enemy with destructive rockets and make them smush like a watermelon!

Flame Thrower - Who wants barbecue? These will make sure you get your Nazi served extra crispy.

Gas Grenade Launcher - Launches grenades filled with deadly toxic gas. Perfect for launching at a group of unsuspecting Nazis. Careful - gas hurts you too! However, those damned mutants aren't affected by gas.

Sniper Rifle - Enemies at far distances are no longer a problem with your fancy scope. Zoom in and BOOM! HEADSHOT!

Flamewall - What's scarier than a giant wall of flames moving toward you? Nothing, that's what. Not many can withstand the terrible scorching power of the Flamewall.

Flame Bazooka - Think Flamewall, but opposite. Shoots a giant destructive fireball that sears straight through enemies, leaving a burning trail of destruction. Careful around this one, or else you'll barbecue yourself.

Shrink Ray - Pretty self explanatory; Aim, Shoot, Shrink, Smash. Shrink your enemies to 1/10th of their size, and then all of a sudden you're the big man in the castle.

The Nazis
Aside from your regular Wolfenstein denizens, they have called in major reinforcements to face you and your upgraded weaponry:

Guards - Your standard brownshirt not only has a pistol now, but some of them carry deadly sniper rifles. Still just as weak as before.

Blitzguard - Who decided to give these dumbasses rocket launchers?! You can tell these guys apart from their normal guard counterparts by their bright purple uniform, however you may want to think twice about running blindly into a room.

Kamikaze Dogs - As if the Nazis weren't mean enough, they strapped explosives to some of their poor dogs! Unfortunately when they're running straight at you, you really don't have time to think about being kind to animals. Beware, some explode with gas-filled explosives!

Elite SS - These stormtroopers are ready for battle. Armed to the teeth, and sporting gas masks along with fire-resistant armor. There isn't much you can do to these guys beside chuck a rocket down their throat. They wield either machine guns or flame throwers.

Officers - As if they couldn't be any more dangerous, Officers now wield many of the same weapons you do, including flame throwers and rocket launchers. At least you'll get a cool weapon when you pop one. The red ones are fire resistant.

Mutants - There are now many varieties of these undead monstrosities. Some will run up and tear you up with their cleavers, some will blast you with their chainguns and pistols, and some have giant flamethrowers attached to their hands and will roast you. Not only are they more armed, but they also are resistant to gas and feel absolutely no pain. Don't try to encounter these guys with measly pistols.

This mod requires Linuxwolf's fork of ECWolf, due to changes such as the damage types and a few things pertaining to the sniper rifle's function. You will need to use this version of ECWolf to play this mod. The fork has complete compatibility with all mods that the current dev version supports.

I have also taken the liberty in making Demolition Editions of two mods not compatible with Wolf3D Demolition, Executor's 2nd Encounter ECWolf port, and my earlier ECWolf mapset AstroCreep's Spicy Wolf3D Challenge! Now you can also enjoy these two mods with the extra weaponry and total carnage!

This update to WOLF3D DEMOLITION brings compatibility to two other games supported by ECWolf - the Macintosh version of Wolfenstein 3D, and the (formerly) family friendly Super 3D Noah's Ark! You can now play your favorite classic MacWolf scenarios with the expanded arsenal and enemies, or you can take the battle to the Ark, and teach those misbehaving animals a lesson they soon won't forget! 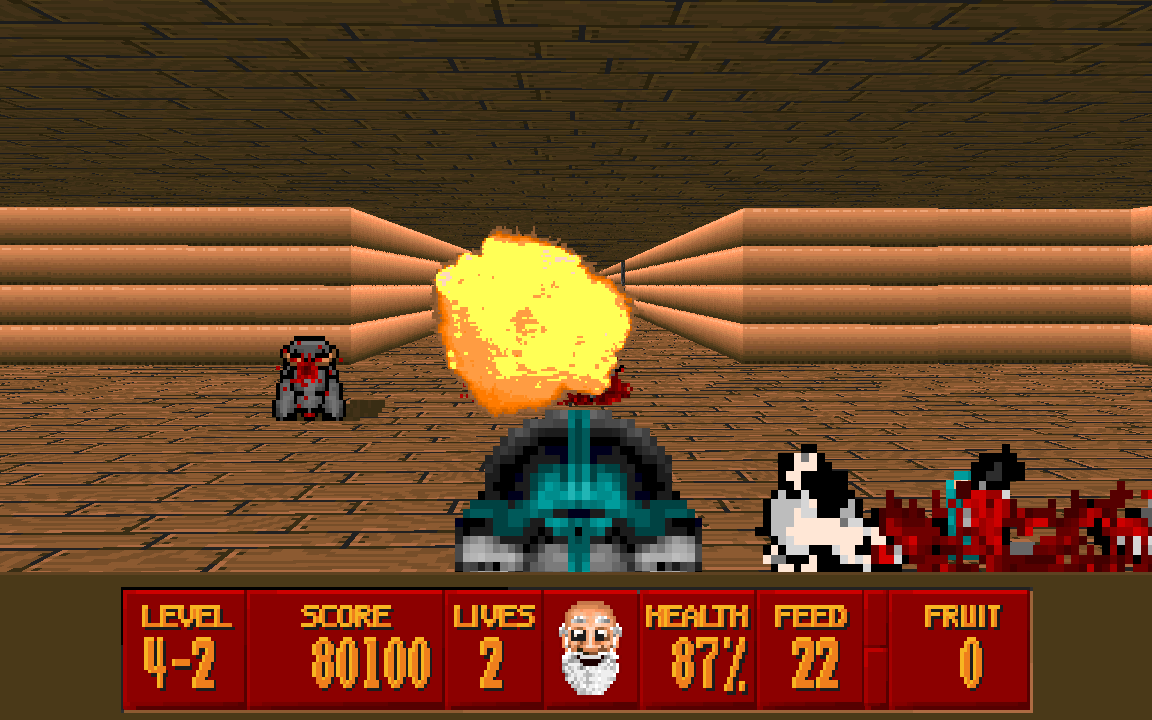 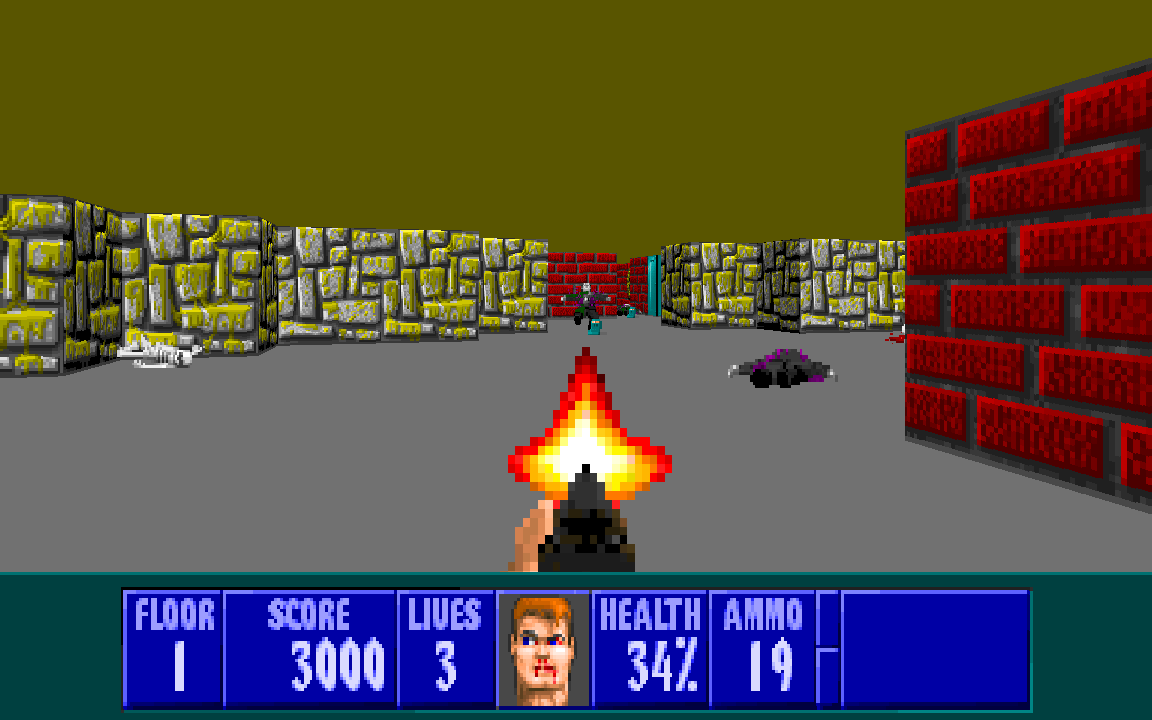 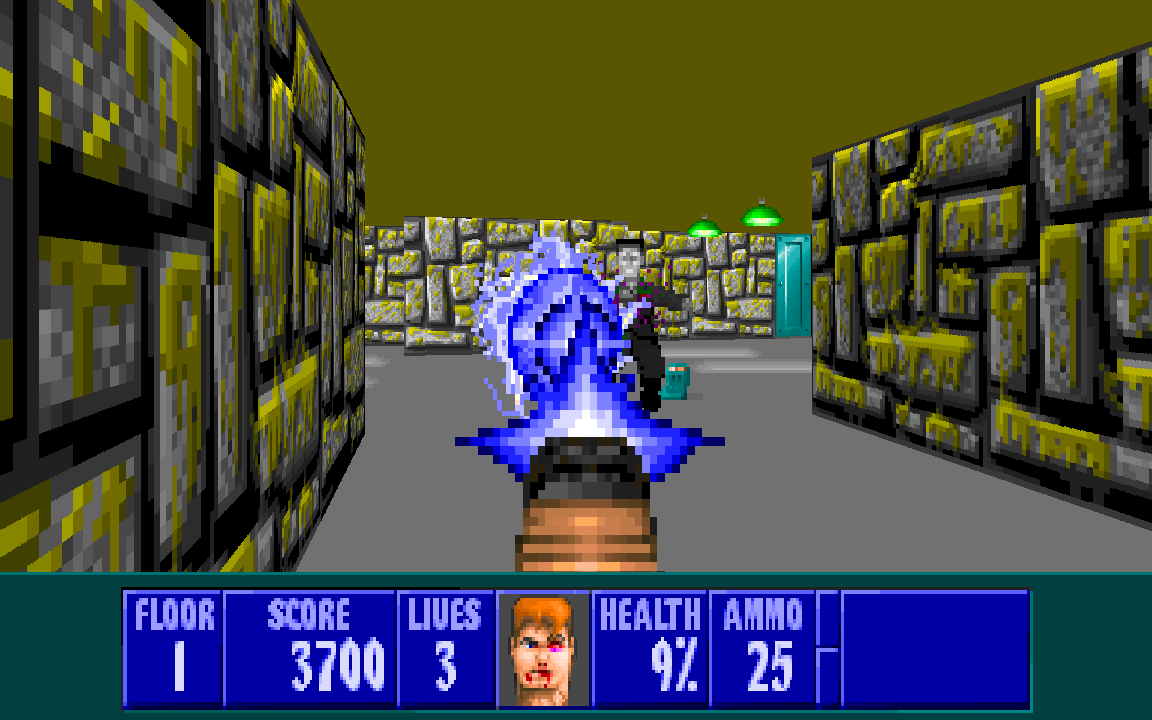 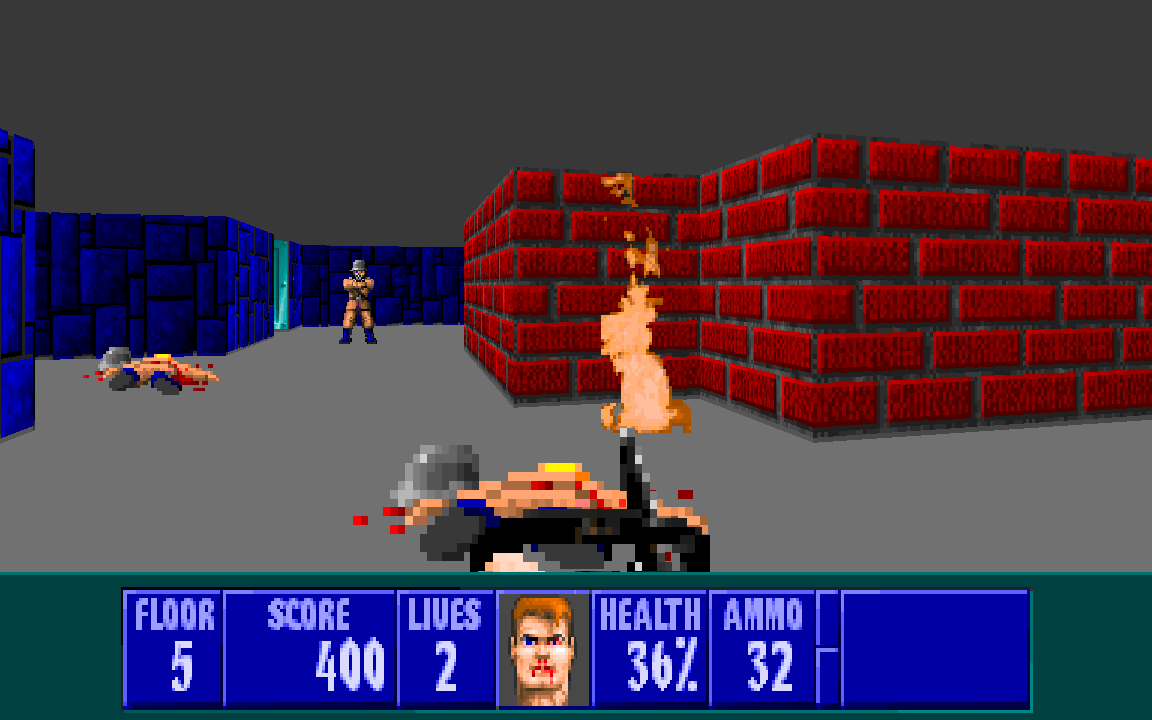 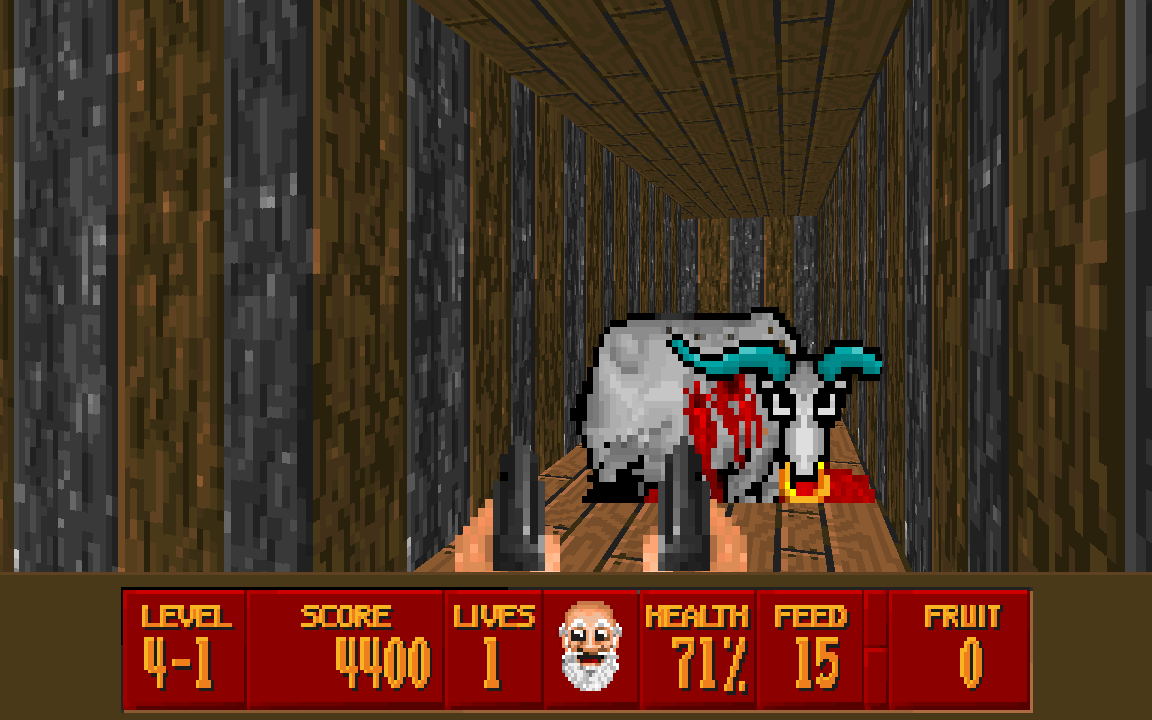 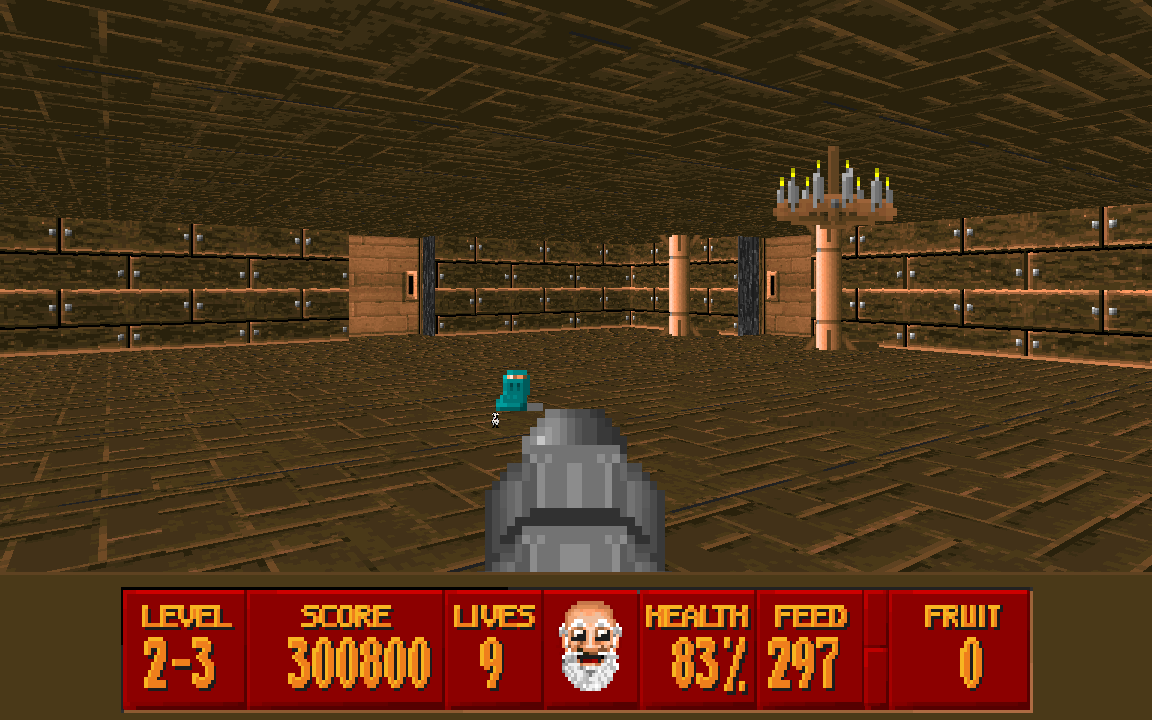 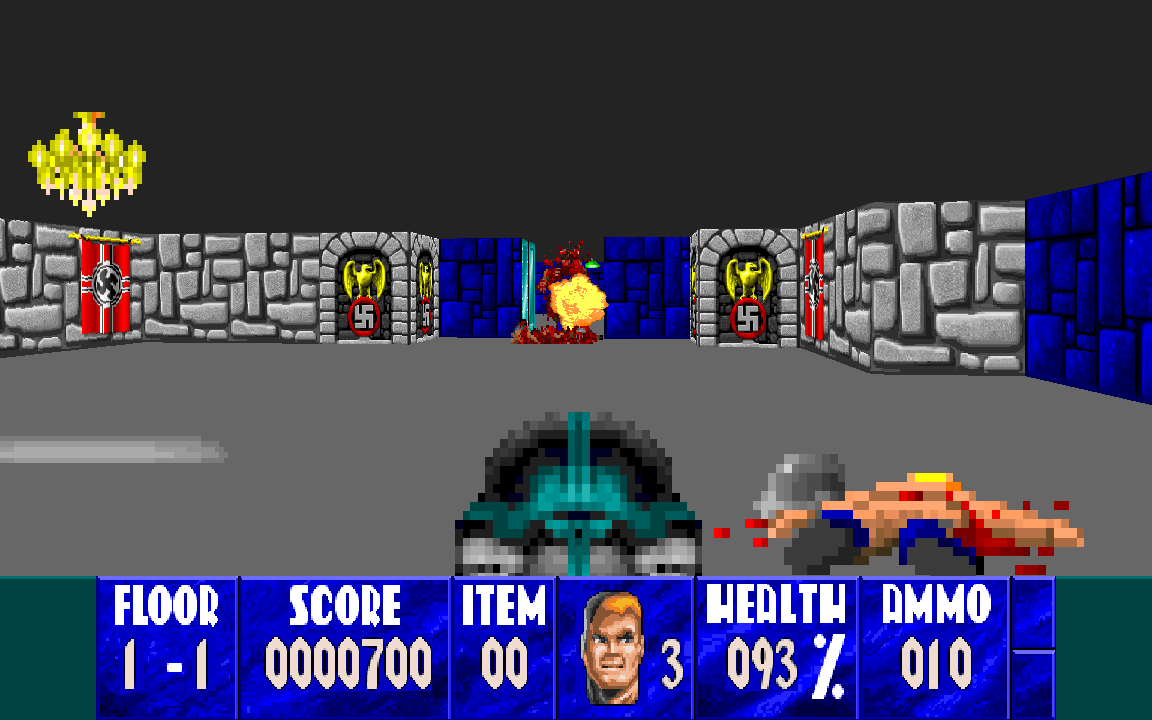 This also includes Wolfenstein 3D: First Encounter, the "IWAD" file for the 3 level demo for MacWolf, as well as a small collection of compatible scenarios, already converted to ECWolf's format! Note that since enough assets are replaced, full version scenarios ARE compatible with 1st encounter using this mod, however I will not distribute the full version level set so please don't ask!

Instructions and more information, along with the downloads can be found on the Wolf3D Demolition page!

A new Wolf3D gameplay mod by AstroCreep, powered by Linuxwolf's fork of ECWolf. Use many destructive new weapons to completely annihilate your Nazi captors...

Version 3 of Wolf3D DEMOLITION has been released! Requires the latest version of LZWolf and Wolfenstein 3D 1.4, Spear of Destiny, Super 3D Noah's Ark...

This is a bugfix of the Executor's port of Second Encounter, because the mapinfo caused severe bugs, that sent the player back to the ninth stage (6-7...

Extra patches for MacWolf and Noah, fixing midi music and a few texture issues with Noah

Linuxwolf's fork of ECWolf 1.3.999, includes more editing features such as parallax skies and damage types, with the goal of being reintegrated into the...

Good mod! Would you mind if i use the rifleman sprites and some of the destroyable props? Credits will be given of course.