A Wolfenstein 3D campaign for ECWolf 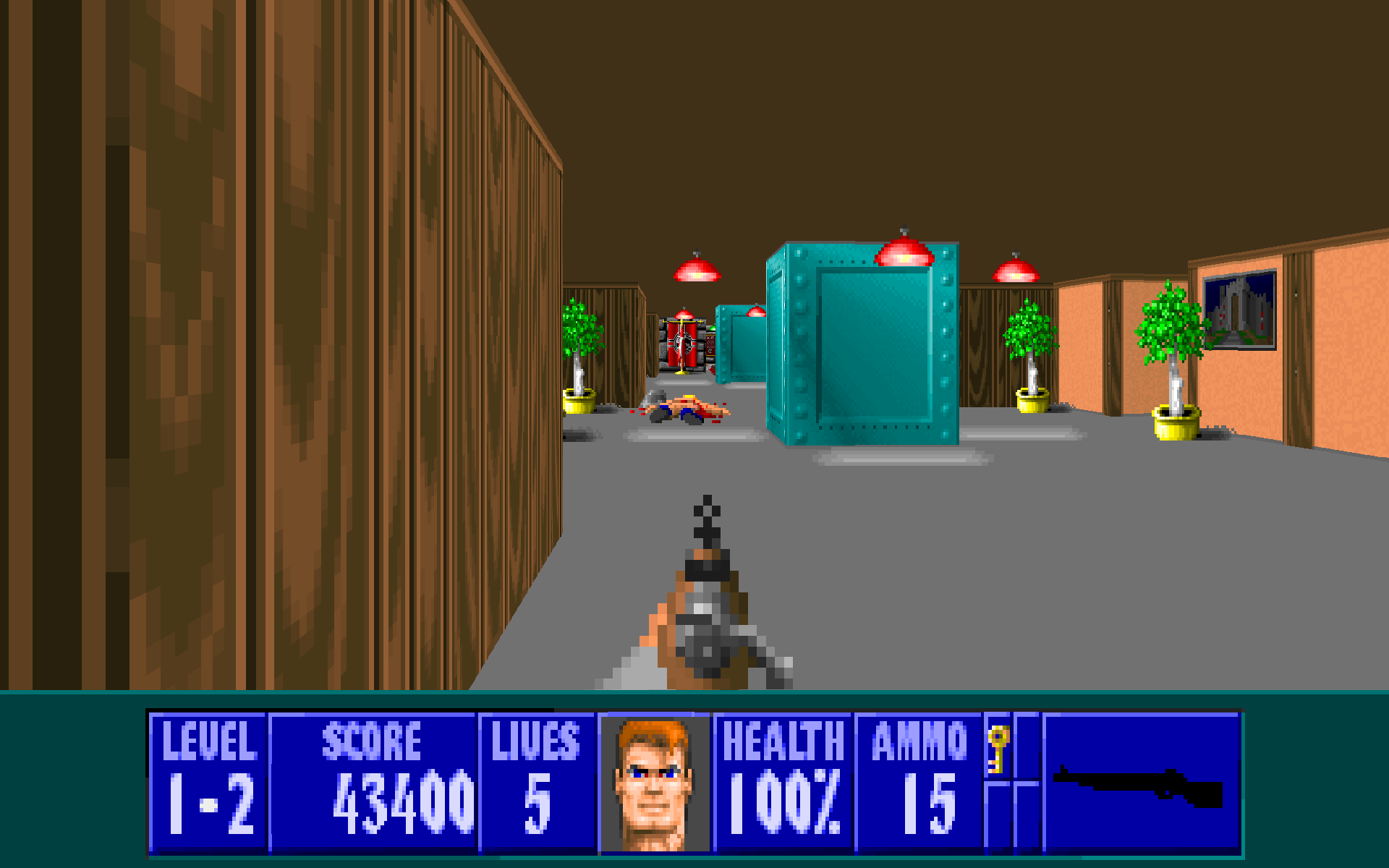 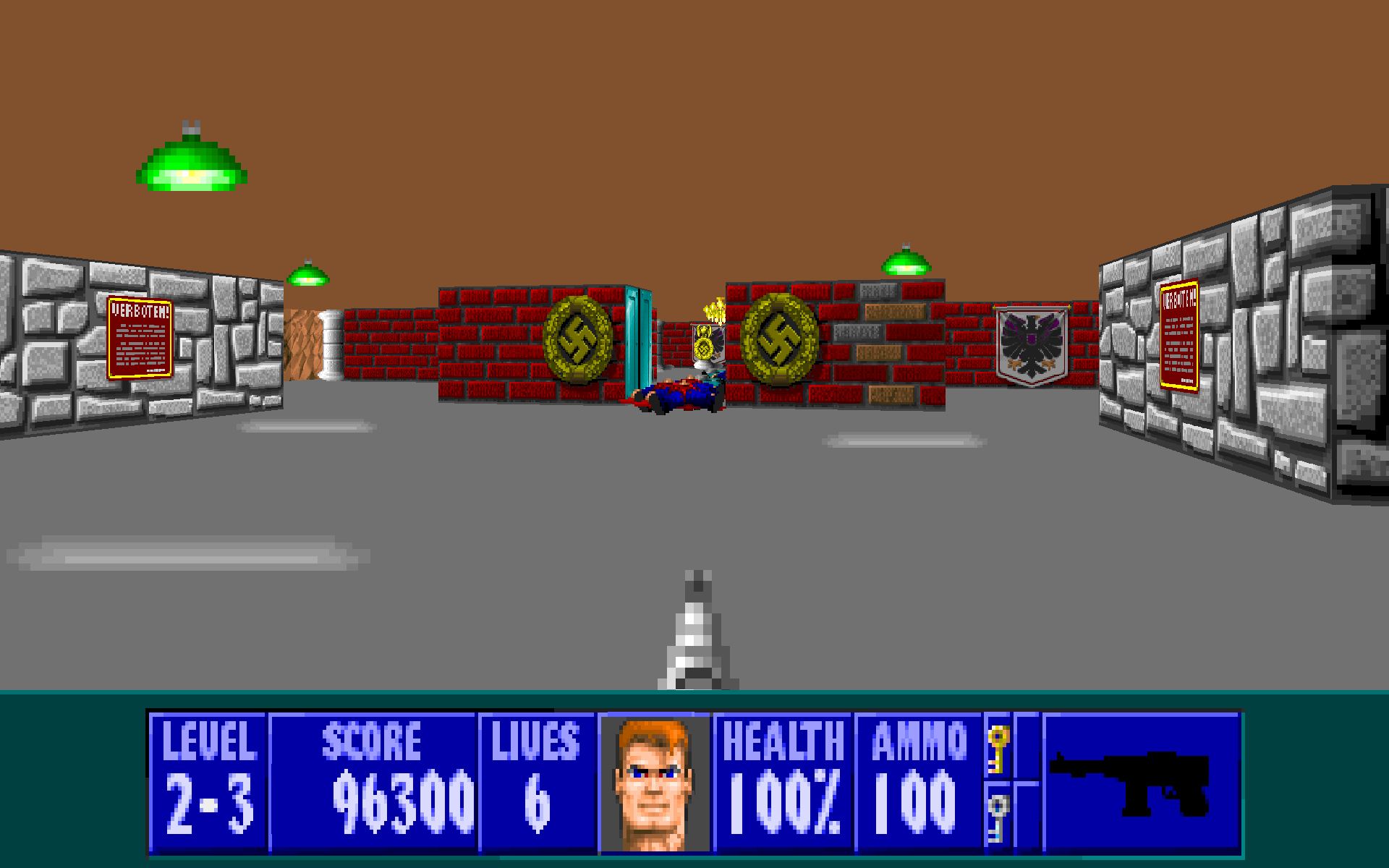 It is the year 1943, in the darkest hours of the Second World War. You are William J. "B.J." Blazkowicz, a spy working for the American OSS intelligence service. While investigating a rumored German chemical weapons program in occupied Lithuania, your cover was blown and you were arrested by the SS and sent to the notorious Castle Wolfenstein, in the Bavarian Alps. Once owned by Bavarian nobility, Wolfenstein is now a prison where Allied spies are interrogated and executed.

You have been imprisoned in Castle Wolfenstein for twelve days. You have overheard orders from your jailer, Oberst Hans Grosse, that you are to receive "special measures" to loosen your resistance to questioning. You see a guard coming towards your cell, but whatever he has in store for you, you have no plans to find out. As he opens the cell door you fling yourself upon him, crushing his windpipe with your hands. As blood pours from the now limp guard's mouth and nose, you take the knife and pistol from his body. You listen carefully--no one seems to have heard you.

Most assuredly, however, they will inevitably come looking when the dead guard fails to report back. You survey your loot from the guard. His uniform is too small for you to wear, but you fit into his boots. Boots, a knife, a pistol, eight bullets. Enough to kill two guards, maybe three. Your act of desperation has sealed your fate. If the Nazis see you, they won't give you a second chance.

Your mission is clear. You must escape from Castle Wolfenstein, or die trying. The enemy will be out for your blood, and you'll need every means at your disposal to kill them before they kill you. As you load the pistol, you think to yourself that you signed up to be a spy, not a one-man army.

Guess there's a first time for everything.

* Seamless 30-level progression with four secret levels and Mac-style segmented level numbering.
* Six missions that follow one after the other, each with its own architectural theme.
* All the new weapons, enemies, and mechanics from Coffee Break--bolt-action rifles, flamethrower Nazis, and more!
* A "drip feed" of new enemies, weapons, textures, and gameplay mechanics that keeps gameplay evolving throughout the course of the mod.
* Much tougher and more powerful dogs.
* Four keys: gold, silver, bronze, and iron. The silver key only appears starting mission 2, the bronze key starting mission 3, and the iron key starting mission 5.

Mission 1 (levels 1-3): Castle Wolfenstein
During your investigation into Nazi secret weapons research, you were captured and imprisoned in the dungeons of the notorious Castle Wolfenstein. You must make your way out of the dungeons, through the keep, and out the main gates to escape. But beware--Colonel Hans Grosse, your jailer, isn't about to just let you walk out the door!

Mission 2 (levels 4-8 ): Underground Complex
Now that you are free from Castle Wolfenstein, you must pick up the trail and infiltrate a secret Nazi chemical weapons facility on the Baltic coast. Find and destroy the Nazi chemical rockets before they can be used on the Allies, and assassinate the project's head, General Gottlieb Totenauge, to ensure the project stays dead for good.

Mission 3 (levels 9-14): Assault on Hollenhammer
Rumor has it that secret biological experiments are being conducted on the dead in a facility beneath Castle Hollenhammer, deep in the Austrian Alps. Explore Castle Hollenhammer and find the bunker entrance. But some of the "experiments" may be waiting for you...

Mission 4 (levels 15-18 ): What Lies Beneath
The secret elevator in the heart of Castle Hollenhammer has led you here, to the secret laboratory of Dr. Schabbs. Four floors filled with deadly traps and monstrous horrors stand between you and the evil doctor himself. Kill them all and bring an end to his plans!

Mission 5 (levels 19-25): The Fuhrer's Eyrie
Allied Command has located Hitler somewhere inside a bunker complex called the Adlerhorst (Eagle's Nest) beneath Castle Kransberg in Kransberg village in rural Hesse. Infiltrate the complex, storm Castle Kransberg, and find the entrance to Hitler's bunker, which is guarded by none other than Klaus-Gustav Ritter von Wetterau, known more commonly as der Totenritter (the Death Knight), Hitler's personal bodyguard and the most feared warrior in the Third Reich. Good luck--you'll need it.

Mission 6 (levels 26-30): A Cornered Rat
You have penetrated into Hitler's private bunker, the most fortified place in the entire Reich. The Fuhrer knows you're coming, so expect to face the very best troops Germany has to offer. And who knows, maybe even Hitler himself will have a surprise in store...

Secret levels (levels 31-34)
These hidden treasure vaults can be accessed from secret locations in Missions 2, 3, 5, and 6. Millions of dollars worth of gold and other loot have been stored in them--but they're also very heavily guarded.

I am proud to present Wolfenstein Missions First Encounter, a demo of my upcoming mod Wolfenstein Missions that features nine out of a planned 34 levels. This is my tenth mod for Wolfenstein 3D, inspired by the Mac Wolf3D's seamless 30-level campaign and informed by over 17 years of level design experience. This mod runs on the ECWolf source port and uses features, weapons, and enemies from my previous mod Coffee Break to add more variety, depth, and strategy to Wolfenstein gameplay. The level design and gameplay have been carefully honed to provide an experience that is accessible enough for Wolfenstein newcomers (unlike some of my other mods) while still challenging veterans. 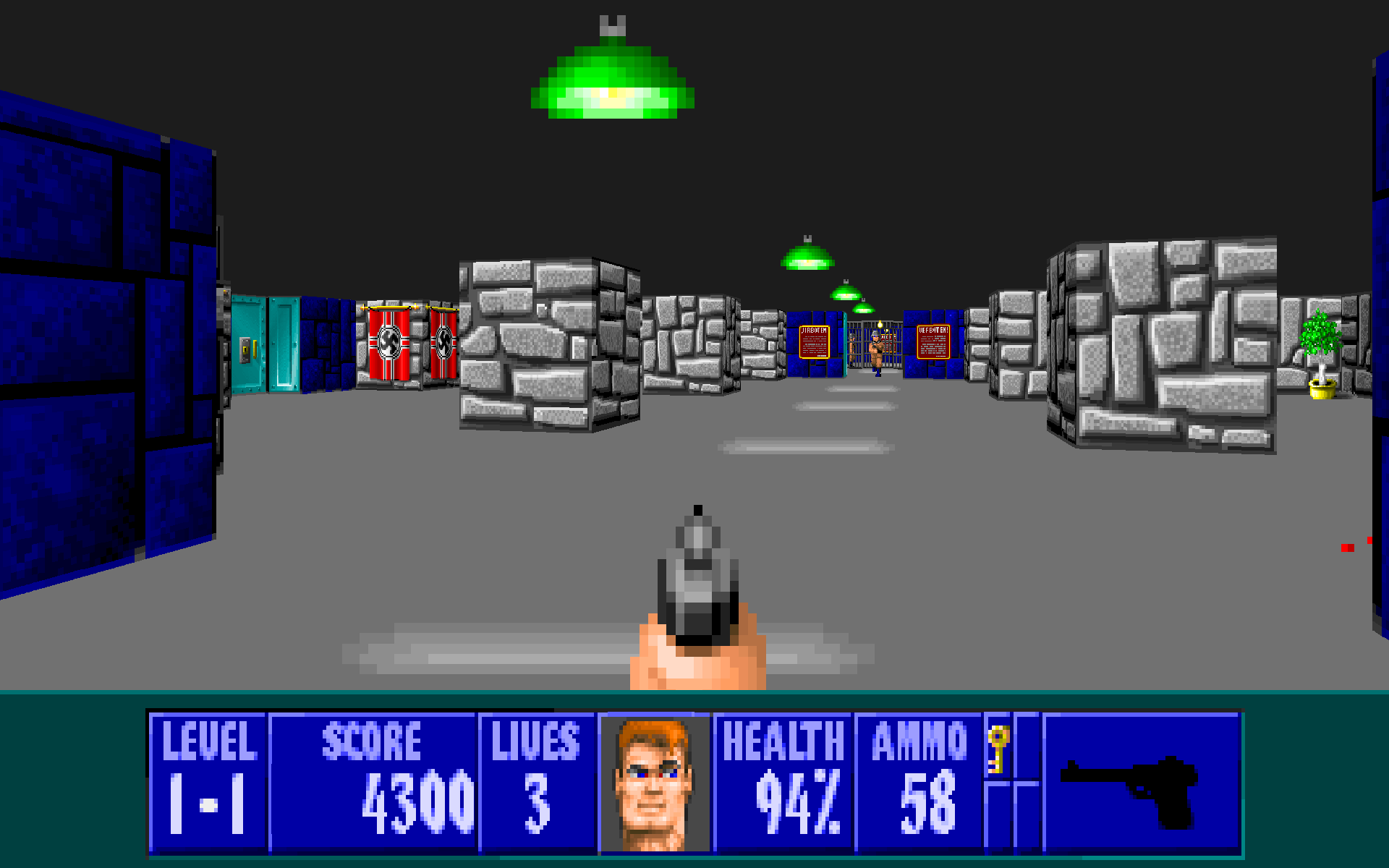 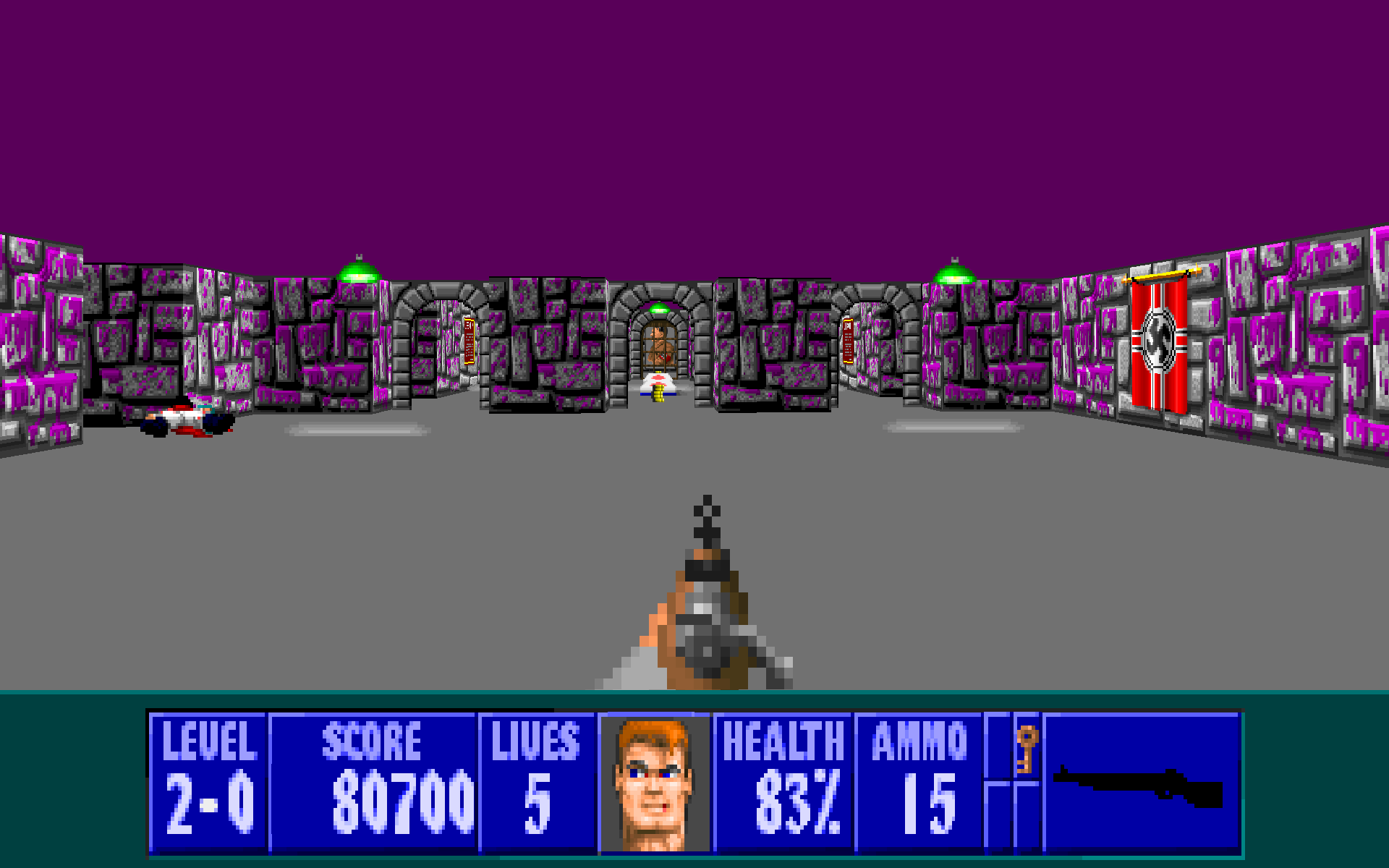 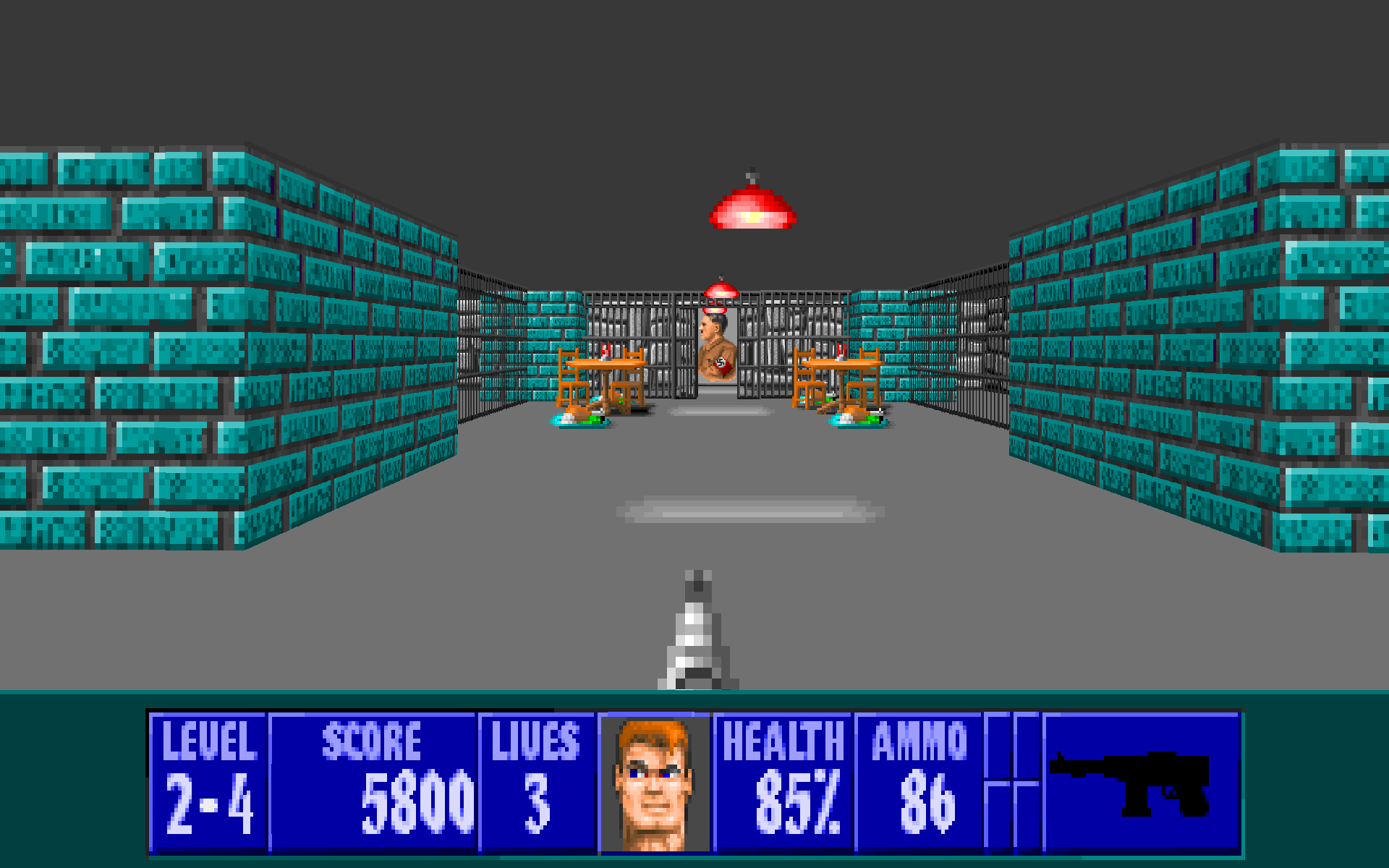 A version of Wolfenstein Missions without ECWolf for those who already have ECWolf installed. Those who have never used ECWolf before should download...

A complete version of ECWolf First Encounter, including a current build of the ECWolf source port. Requires a copy of Wolfenstein 3D v1.4 to play. UPDATED...

Hello! I would like to know where do you get these rifle sprites, because i am working on a doom project, and these sprites could be usefull, but i dont know who is the original creator of these sprites, do you know who is?

Hey I got 100% in the first encounter :D
Pasteboard.co

Hello, my game crashes immediately after I select difficulty, could you perhaps guide me on how to solve this problem?

I appreciate that you're doing a more "serious" wolfenstein mod that adds new things while still retaining the classic game mood. Coffe break has some pretty neat levels but I think the story and level names are way too joke-y even for a basic id level of storytelling. Coffe Break is like the Saints Row 3 of your mods. :p

Glad you're liking this, but I feel obliged to insist that Coffee Break does what it does for a reason. The storytelling is deliberately minimized to put more emphasis on the levels and enemy encounters themselves. The levels don't have to tell a story in Coffee Break or fit within a thematic progression, which gives me room to create interesting gameplay or architecture or do experimental levels without worrying about making it make sense.

I understand. That also explains why both mods are separated despite still being WIP and sharing resources (instead of being another Coffe episode): they have different tone/goals.