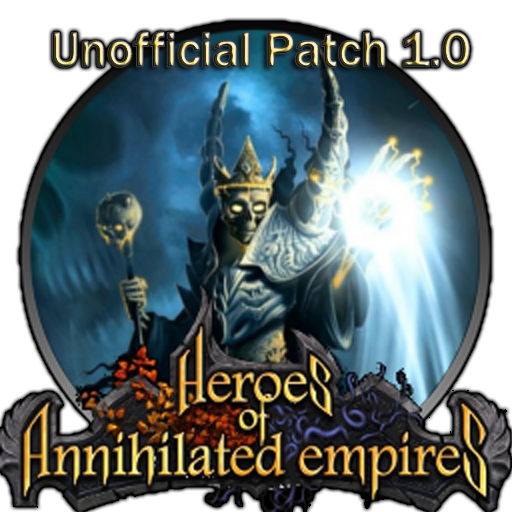 Now available for the Steam version of HOAE. Make sure you grab the right installer for your edition of the game.

I discovered this game nearly a decade after its release and I was very surprised at just how good the game is. Another surprise was finding out just how unknown the game is. The original 2006 version release was infested with Starforce and the game was released with a real lack of multiplayer maps, but other than that there's a ton of content as an RTS. Unfortunately the developers dropped it very quickly which probably explains the whole situation.

Here's an update fixing what should have been fixed a long time ago. Most of this patch is really just very basic fixes that could have done on a sunday afternoon by the developers. For the unit balance side of things, I didn't change many units unless they were in a severe state as most of the unit balance isn't too bad, at least against the AI. For spell balance, I got a little more creative and tried to make the majority of spells worth using while remaining balanced. There were some seriously worthless spells, some broken ones, spells that didn't level up at all, and some that had no equal. I also tried to reduce cooldowns to reasonable levels where possible. For item balance I mostly focused on eliminating the negative bias on items, there were simply too many items which were more damaging to your character than helpful, now hopefully you can choose from a variety of items without being penalized heavily.

Some of the changes do not affect the campaign, specifically the unit changes. The campaign has its own balancing and I did not think it wise to upset it, other than making the first mission slightly easier. Items, spells and hero skills are all enabled on the campaign however.

All players in multiplayer require the same version.

1. Locate your Heroes install and ensure it is version 1.1 (I recommend the pre-patched GOG version, but the steam version should work also)
2. Install the patch to your Heroes directory.
3. Run the game, if installed successfully, you should have "Unofficial" in the bottom right of the main menu.

To uninstall the patch, just delete patch02.gs1 from the Data directory in your Heroes folder.

Barren isle is a 7 player RTS/RPG skirmish/multiplayer map. It has been well tested with AI and performs reasonably well.

Build time was around six days. I spent a significant amount of time ensuring it was built professionally and that it was fairly balanced (it is not a symmetrical map). I do not recommend running the game on high speed as some of the geometry is complex and may cause frame rates to drop when gaining territory.

Summon genie was replaced with Summon devil, as the genie spell was a copy of the ice elemental and it was a boring choice.
Now the summon is a seriously powerful asset to a caster (although not as powerful as a real devil). Life drain from the spell will eventually kill your hero if the devil is not dispelled. The devil grows in power with caster level. Handle with care.

Mission #1: Hero now starts with an explosive elixir. You can now lose 30 citizens rather than 20 in the first objective.
The tower is slightly more useful at the start also.

The player's hero is released earlier in RTS mode. I decided to stray away from the RPG mode in multiplayer in favor of getting access to heroes for more interesting RTS play. RPG mode should still function as usual, but expect your RTS opponents to catch up if you linger.

Hero run ability speeds increased from 50% to 100%, but length reduced by half.

The mummy has a bit of an identity crisis. Being one of the few fast undead units, I decided to push it more into a skirmishing/anti-magical troop role.
It should hopefully now be a viable early game choice.

Deathknight attack range raised from 40 to 80 because it was unable to hit targets in melee.
Deathknight no longer has issues with formations.
Zombies are now able to move properly.

Ornithopter can now shoot at ground targets. These were too terrible at their actual anti-air role that I decided to open the ground up to them. They're now much more useful as sniper platforms.
Zeppelin rate of fire 80 to 45, damage 60 to 35, range 300 to 400.
Zeppelin piercing resist 5 to 0.
Zeppelin bomb radius 50 to 75.

Many spell cooldowns were reduced by half, check the readme for more details.

Check the readme accompanied with the mod install.

Improved some of the English used to describe skills.
Unlocked various difficulty modes.
Map editor added to the main menu.

Towers may be unable to fire if you attempt to use their ability out of range. Fire the ability at something within range if this happens.
Undead AI #1 (zombie build) can start a bit late if difficulties are above very easy. I haven't been able to fix it, but the AI should still function as normal, it's just a bit slow to get started.
Zeppelin AI needs improvement. I tried to make the weapon 360 degree so it would be more responsive but I haven't figured out how to yet. In the meantime it should be much improved for players.

Hopefully you enjoy my patch for this great RTS.
Magitek

Unofficial patch for the STEAM version of Heroes of annihilated empires.

Experienced a little issue, while playing this patch. Tested on AI from normal to impossible, steam version. Something happened to their unit-build speed, because it's gone. Every single unit is building faster than a skeleton with all speed buffs. Not really in modding, so couldn't find how to solve this problem in patch file. With that not really can play, though it is possible to fight, but seems quite unbalanced. Waiting for any help

It should be, but I haven't verified that the installation methods posted will work.

A bug in the campaign where you have to find the Hammerer's Gauntlets from Orc to exchange for key. They don't drop now and I found something a really strong item instead with no name but fits in ring slot.

Problem is you need those gloves to exchange for key otherwise you have to pay 2,000 gold instead in the artifact master tent.

Artifact Master tent seem to drop randomly from creatures when they are killed sometimes blocking paths and I have to reload till I can arrange it so it won't block the way. I've never played the game before but I guess that's a bug with this patch?

Sadly it's probably an issue with the base game, the unofficial doesn't add or remove any items and doesn't touch the campaign except the first mission. It sounds like a pretty annoying issue.

If it is caused by the unofficial patch, downgrade to the base game for the mission in question and that should resolve the issue. The unofficial patch doesn't have a heck of a lot of campaign testing - I hope that was the only serious issue you encountered.

Please post a description to help other understand the mod.
Wish your mod bring new life to this game.
Thank you for this

The description is there in full, you just have to click "read more" - Mod DB has changed how the page is viewed.

Thank you! Just thank you!!! I realy hoped there would come out a second game, this is a realy fun game and i hate to see it die...