Crusader Kings II: The Seven Kingdoms is a Crusader Kings II mod based on the Game of Thrones universe. Built from the ground up with a hand painted map of Westeros and west coast Essos, over a thousand provinces, a huge amount of detail and most importantly for us, a focus on multiplayer stability and performance.

Unlike the AGOT mod, our mod will be lacking in the depth department as we will be avoiding intensive scripts, event chains and other flavour events due to their impact on performance in a multiplayer environment, especially with more players. So if you are a singleplayer focused player, we suggest you check out their excellent mod instead. Plus, as an added extra, they have all of Essos too!

We will have one or two start dates down the line, but our first is set during the Andal invasion, dated to 6566. Although not entirely accurate, with a somewhat more fractured world than is portrayed in the lore, it is far from the reign of the hundred kings discussed prior to the chosen start date.

From the Mudds of Muddland to the Viceroy of the Valyrian Freehold, ruling over Western Essos, there is a huge array of characters of many different cultures and religions. From the followers of the Weeping Lady to the heresies of the Seven faith, there is no shortage of religion and religious conflict.

You can also find us on the Paradox Forums (login required): Forum.paradoxplaza.com

Q. Do you plan to expand the mod to later dates or bookmarks?
A. Eventually, yes. However, our focus will be on the earlier years and will not go beyond the doom of Valyria (in an official capacity, nothing will be stopping others from creating bookmarks set in later years).

Q. Why is the map so... Different? What happened to the iron isles?!
A. We chose to create an entirely new map from scratch, using the original map by GRRM as a source of inspiration rather than building on top of it. Furthermore, his map was created as a guide for readers, and not for zoomed in gameplay such as what CK2 features.
This was the result, albeit flawed, but we like to argue that 1,800 years can have an impact on the geography.

The Team & Contributors:
(big shout out to Vierwood and tsf4, the mod would have not got so far if it not for their tireless effort!)

A lot of people have put a lot of time and effort into the mod and many people have added their touch, big or small, along the way. It's a bit difficult to list everything everyone has done, because our main lads (excluding ZeroFighterR, he's our mascot) have done so much. Especially Vierwood and tsf4.

Rowan - Project Founder, he who raised mountains and forged the ring.
Vierwood - Master of the archives, recorder of all history and founder of the isle.
tsf4 - Master of names, he who has named thousands of nameless places.
Adramelech - He who put Bran the Builder to shame with his masterpiece - a fully 3D wall.
ZeroFighterR - Still searching for his pigeons.
Amr - He who regards Dragons as animals and swords as toys.

The AGOT team - For allowing us to edit and use their wonderful portraits.
Silverino - For allowing us to use some of his portraits from the excellent CPR+ mod.
Velho e Bom Joe - for the Culturally Different Cities mod, which has been partially integrated.
Marc Simonetti - For his excellent Game of Thrones artwork, which is being used in our mod: Art.marcsimonetti.com

JonStryker - For the mapfiller tool, which played a fundamental role in getting this mod working in a reasonable amount of time!
AgentPaper - For the Character Generator, used by Vierwood to rapidly fill out regions with placeholder dynasties.
GIMP - A great, completely free, image editing program which has been responsible for everything from the heightmap and terrain to images used for some of the traits.
Paradox Wiki - Provided an invaluable resource for the development of a mod, especially one of this size.

It has been months since the last official release of the Seven Kingdoms mod, and I am very excited to announce that the newest version will be released in a couple of days on (or around) March 18th. With this version comes countless changes involving history, graphics, events, mechanics, buildings, etc. We have not even managed to make a complete changelog because there are so many changes and additions! So without further ado here are a few things we hope you will enjoy in v9. 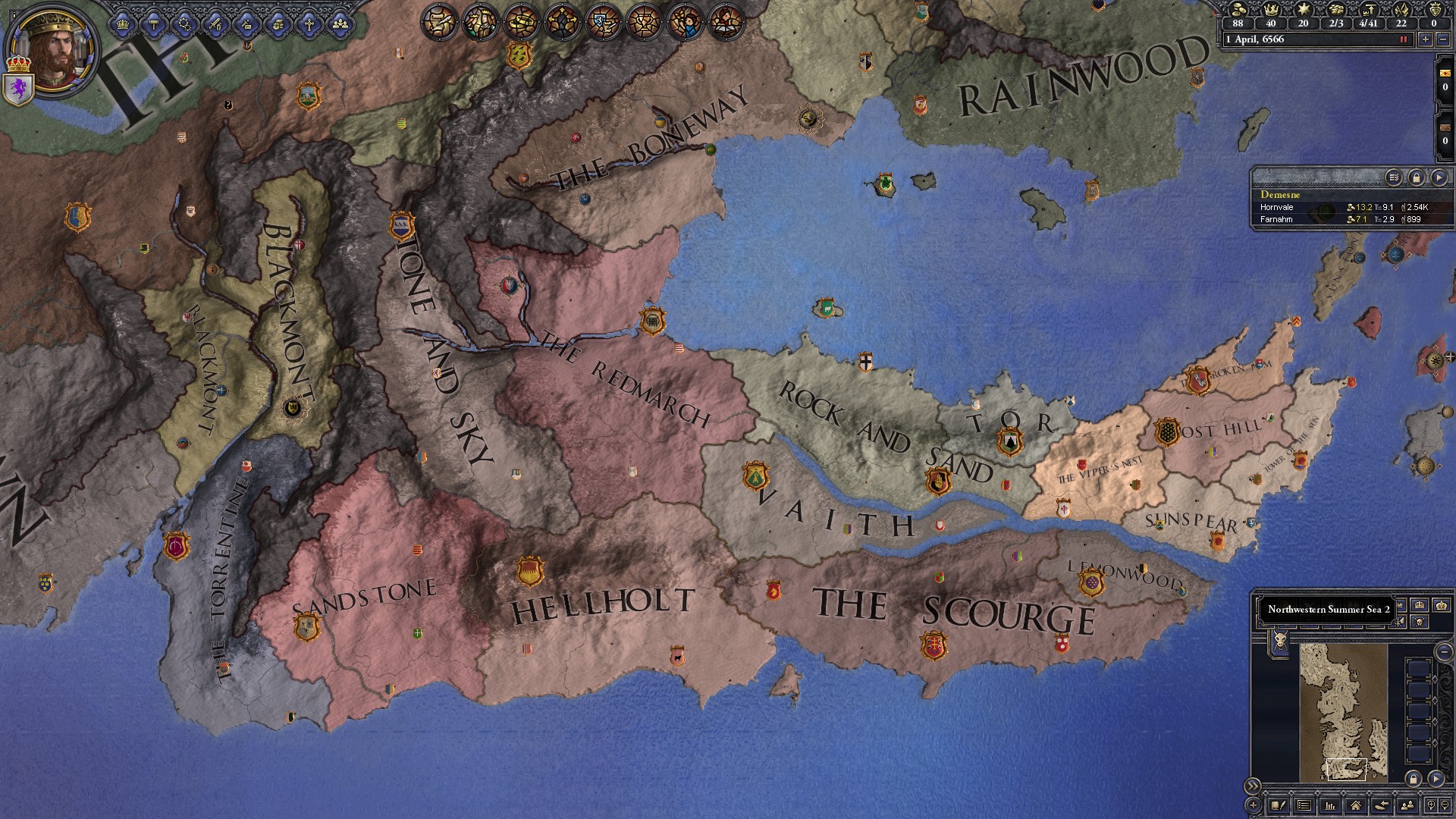 A complete overhaul of Dorne, adding in many new Petty-Kingdoms and houses. 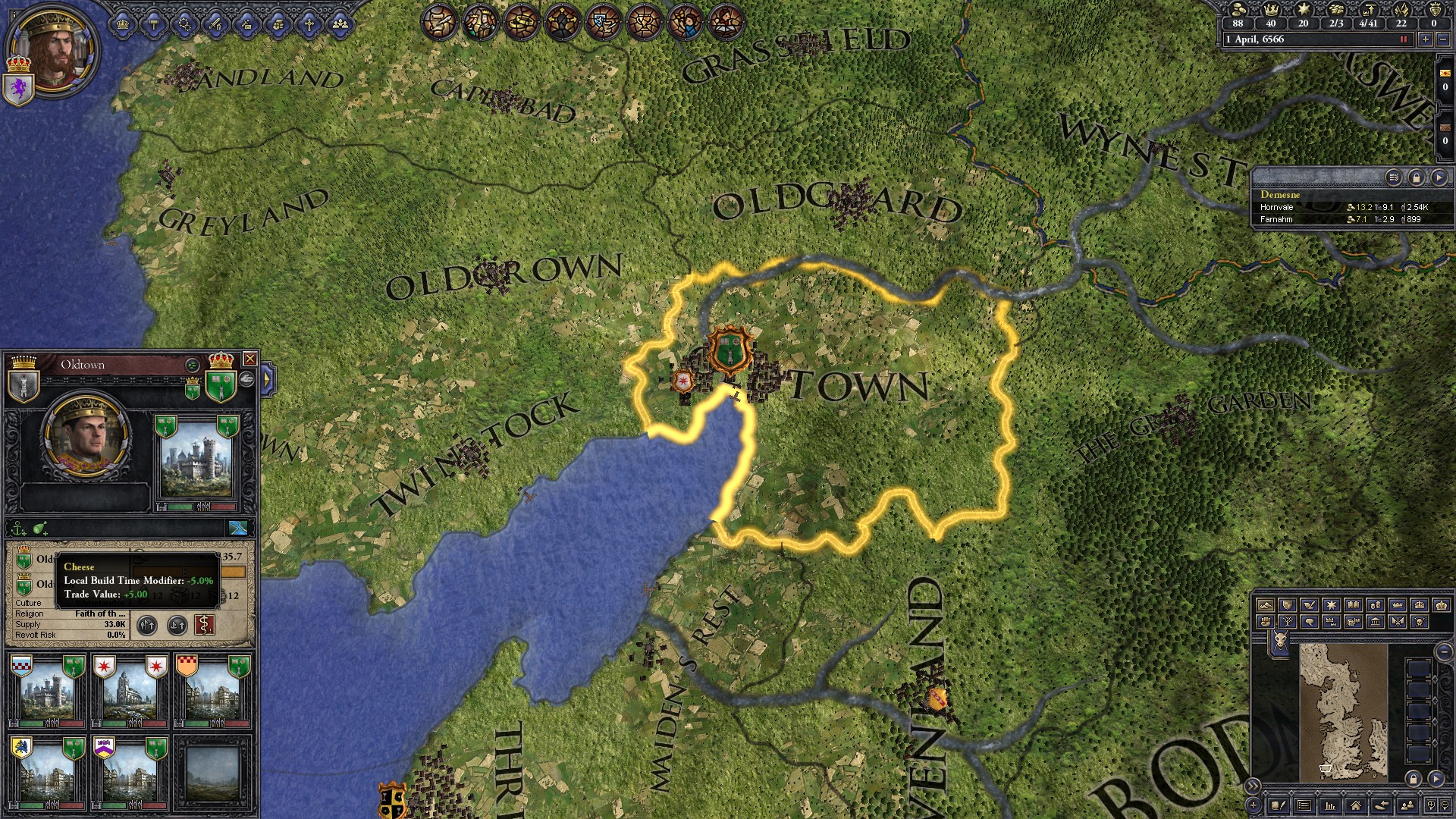 A dynamic resource system that adds modifiers to every province in the game. 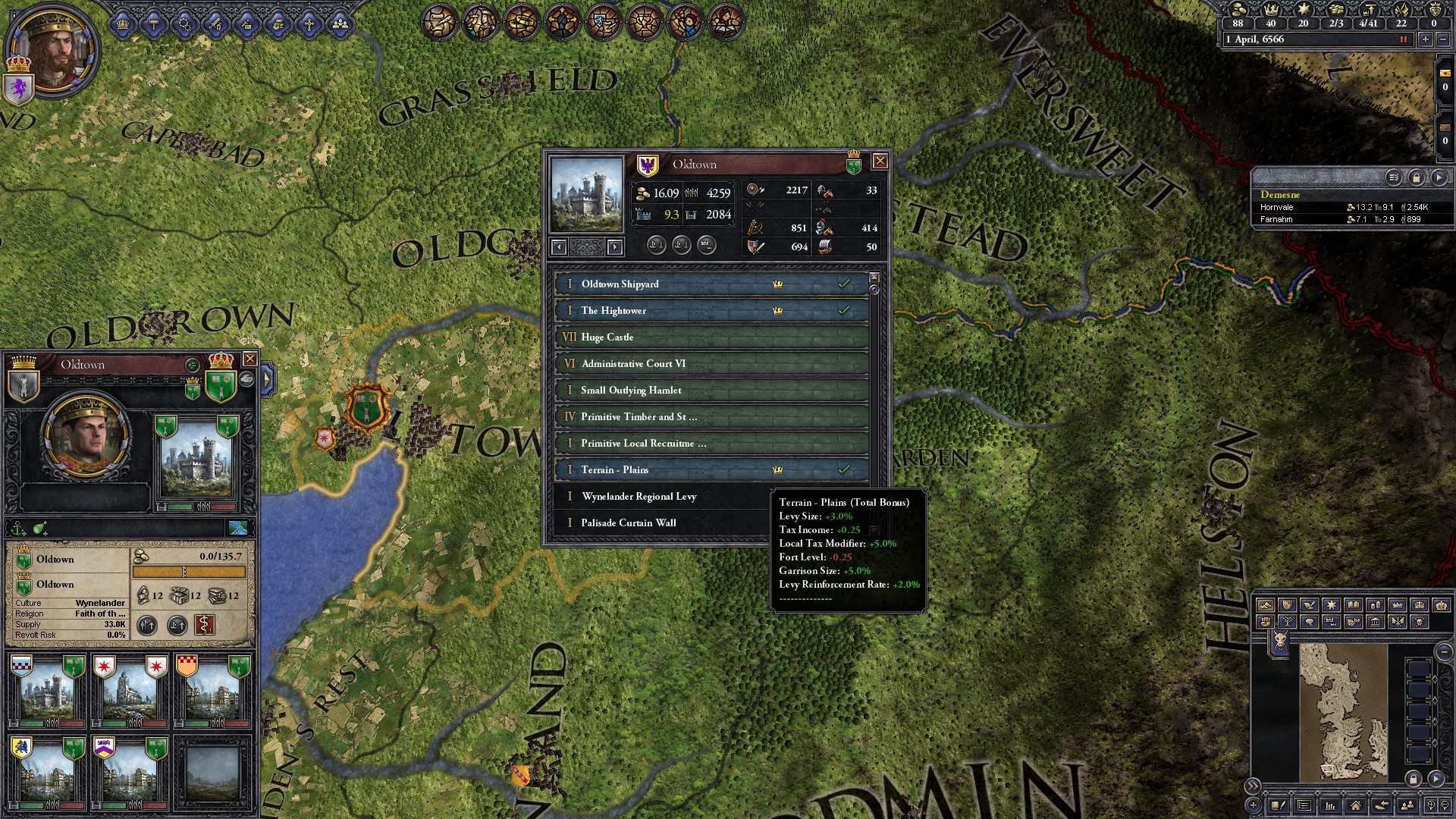 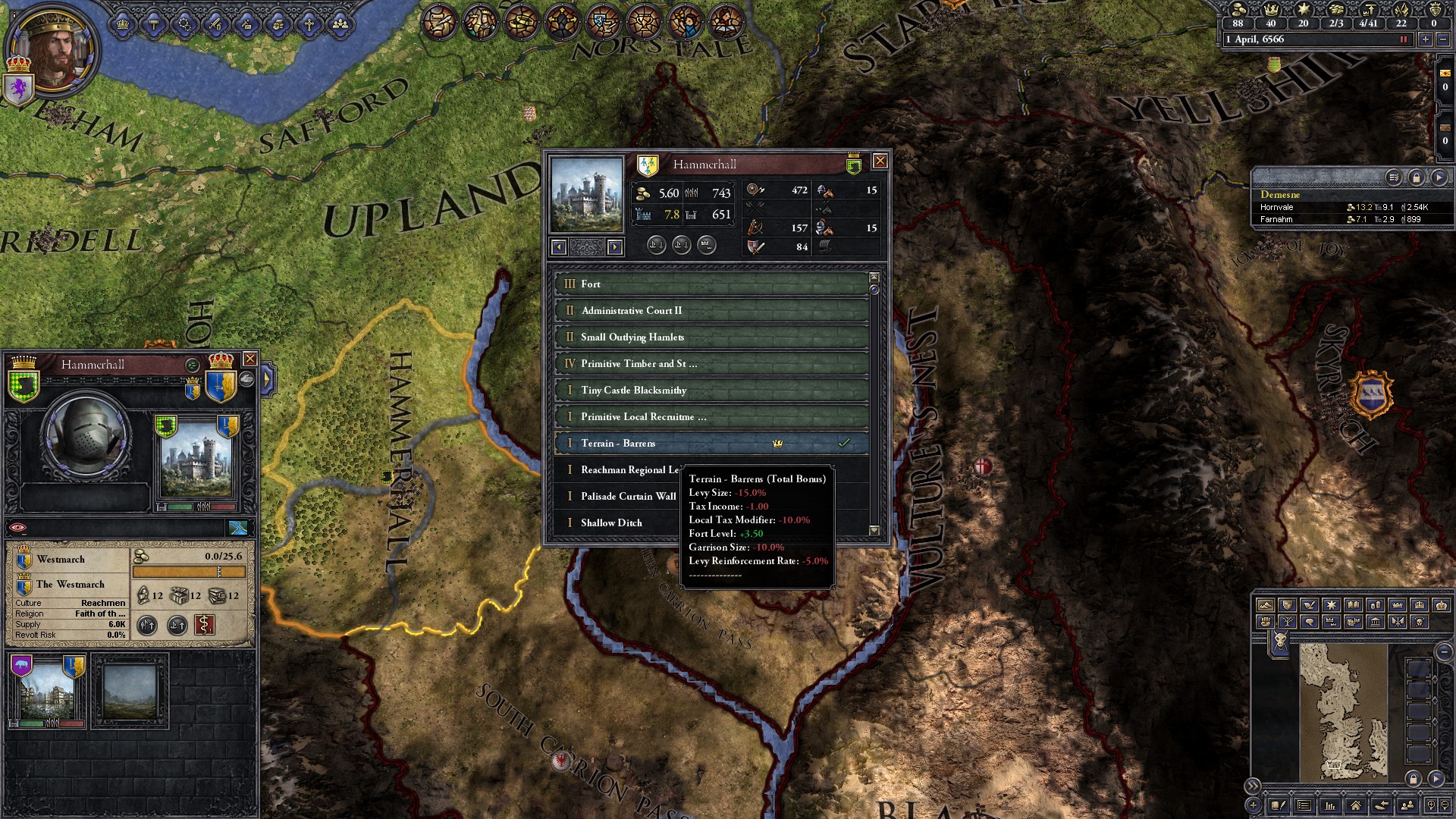 Terrain "buildings" that effect provinces to make them more realistic and fully realized. 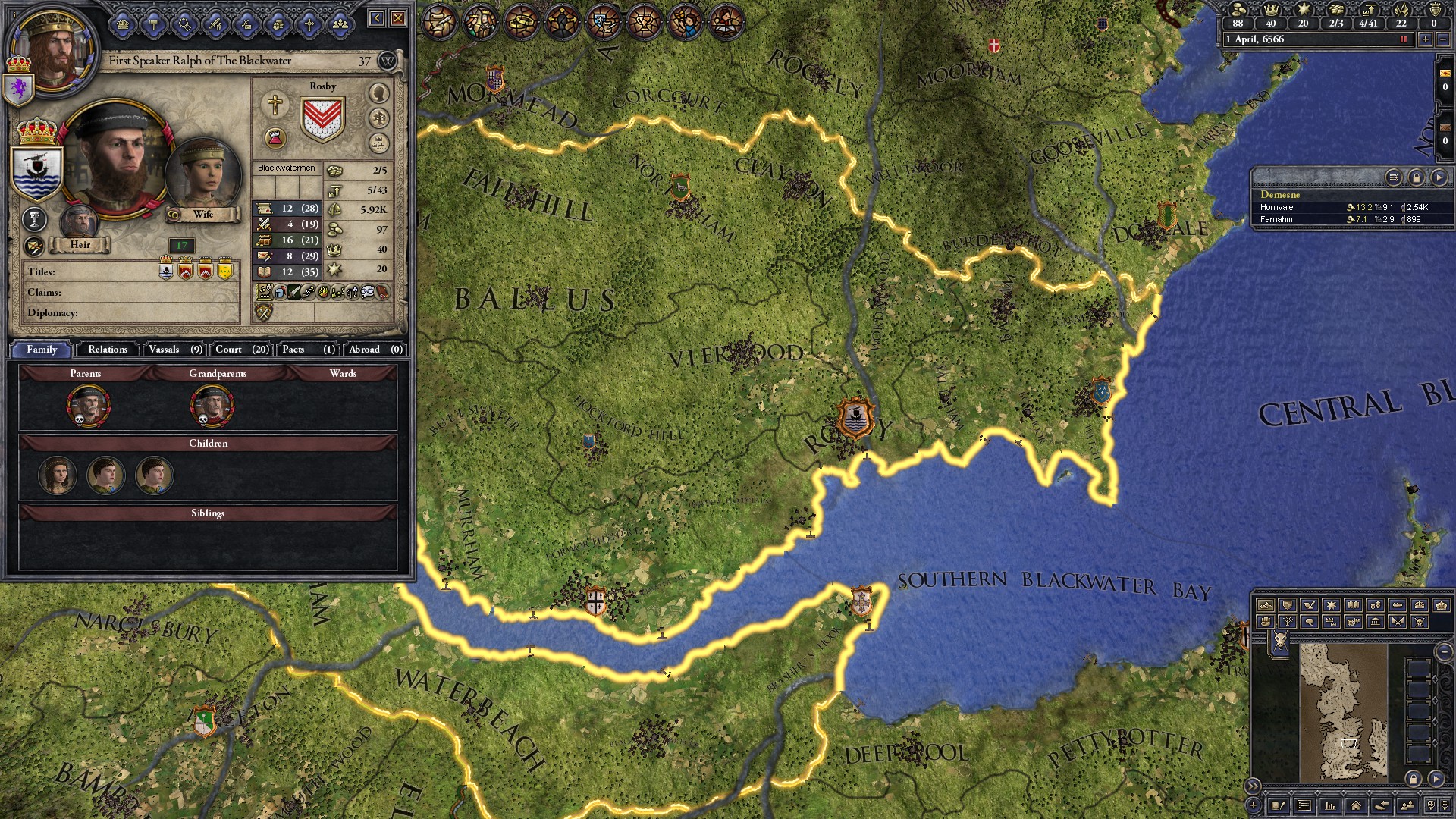 The Blackwater is now unified under the Bureaucratic Councilship of house Rosby. 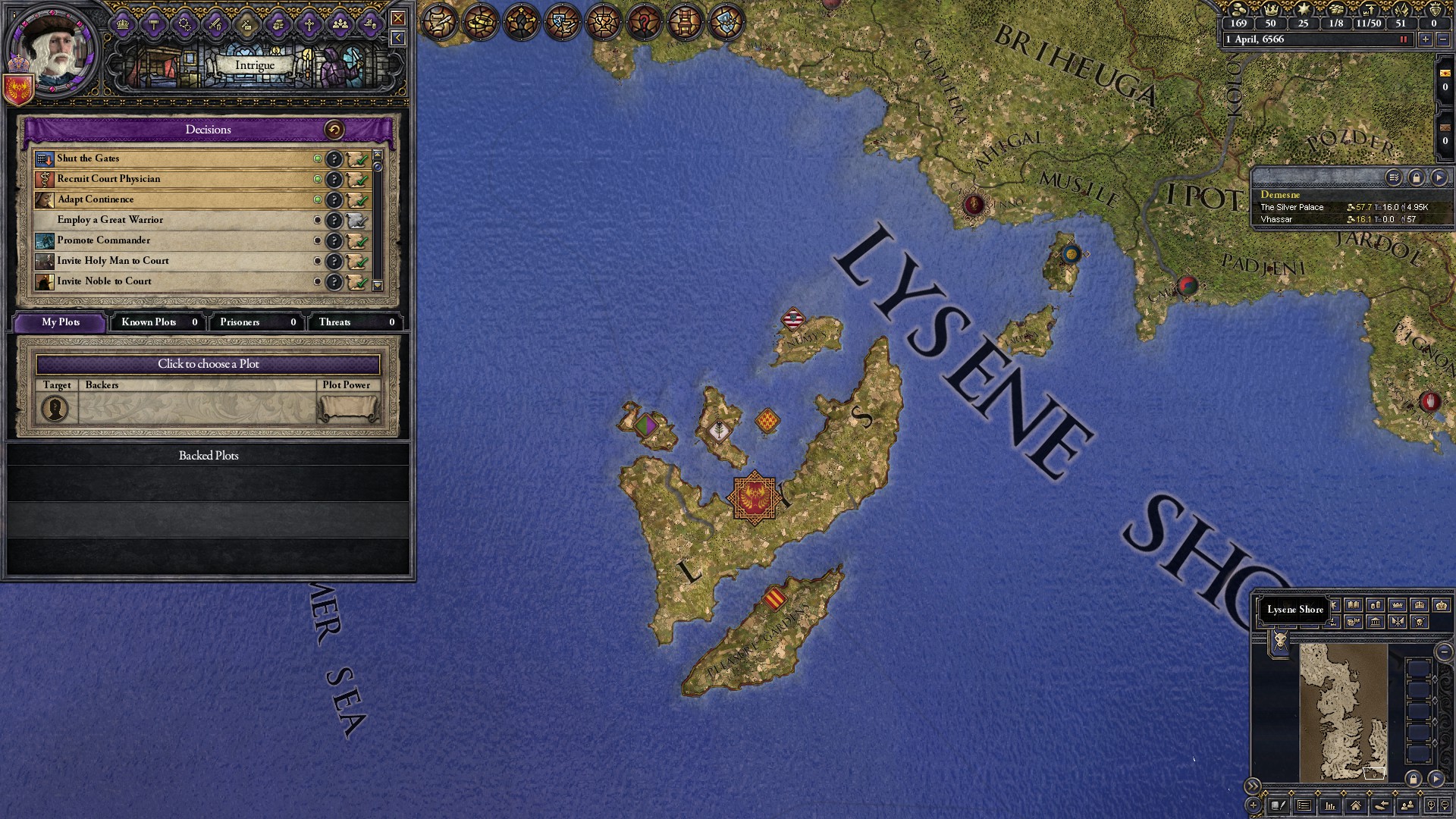 A new (purple) UI for the Republic and Freehold governments. 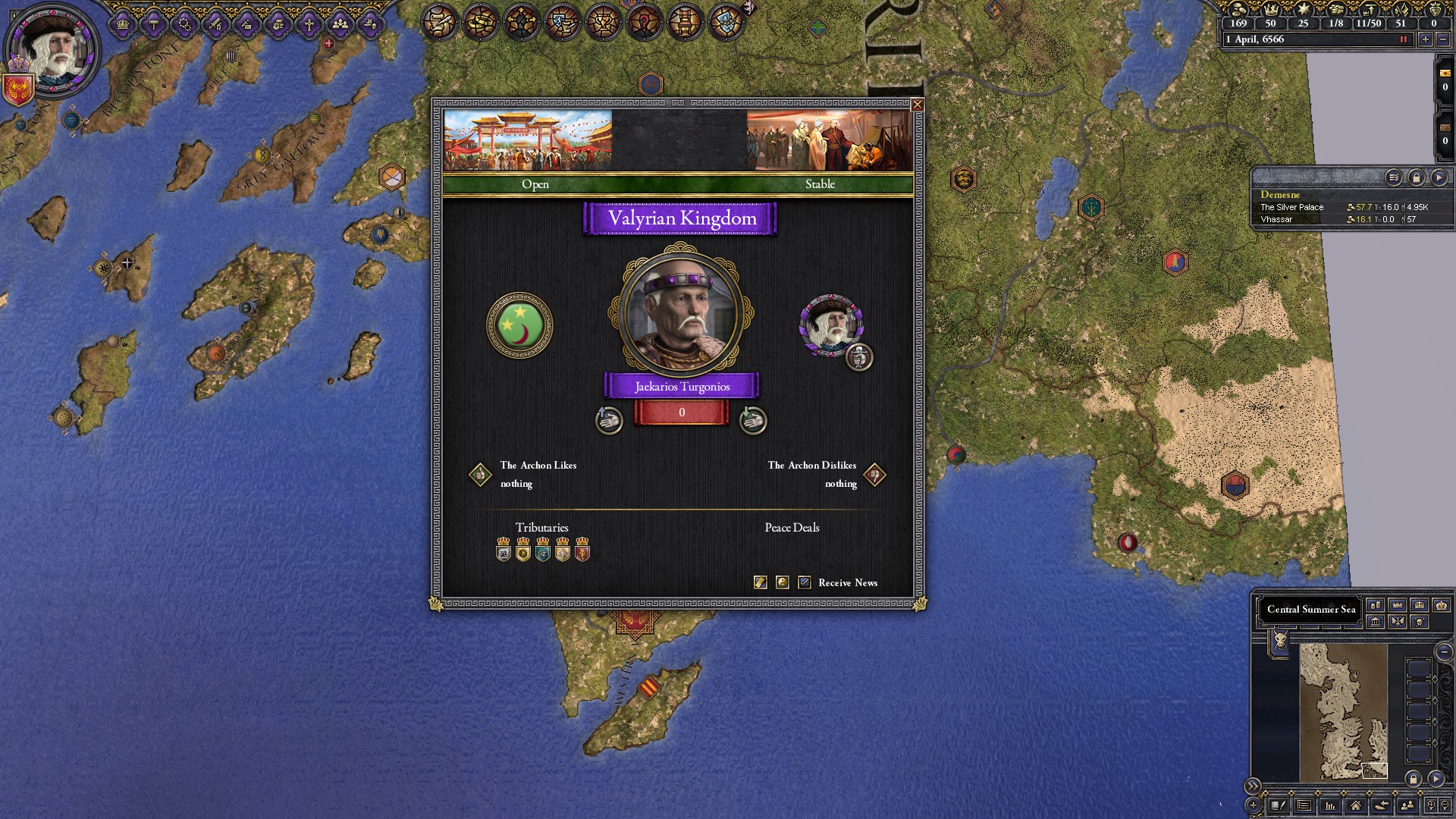 The addition of the offmap Freehold! Which is still a work in progress! 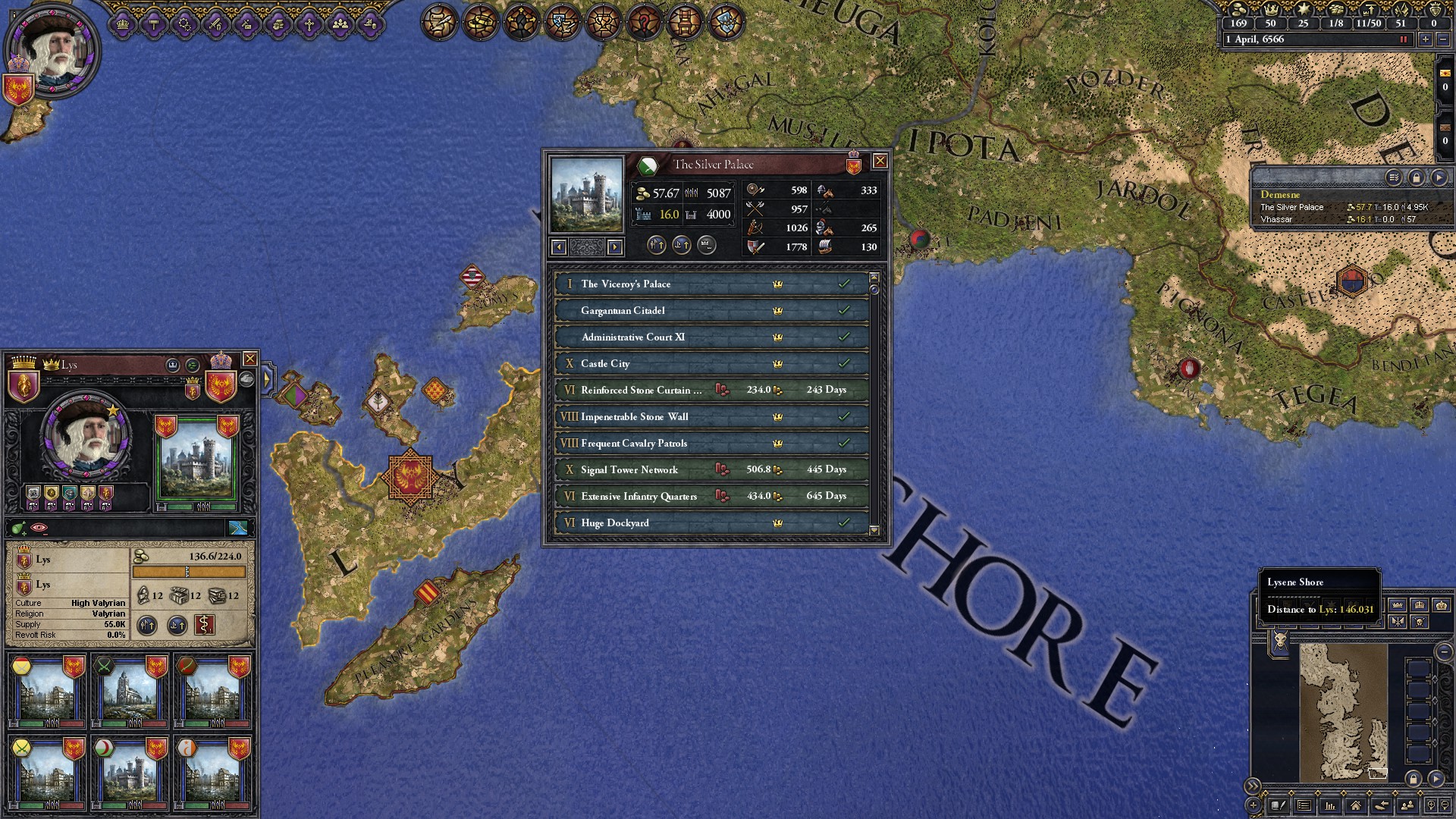 Updated province history to increase the balance of the world. 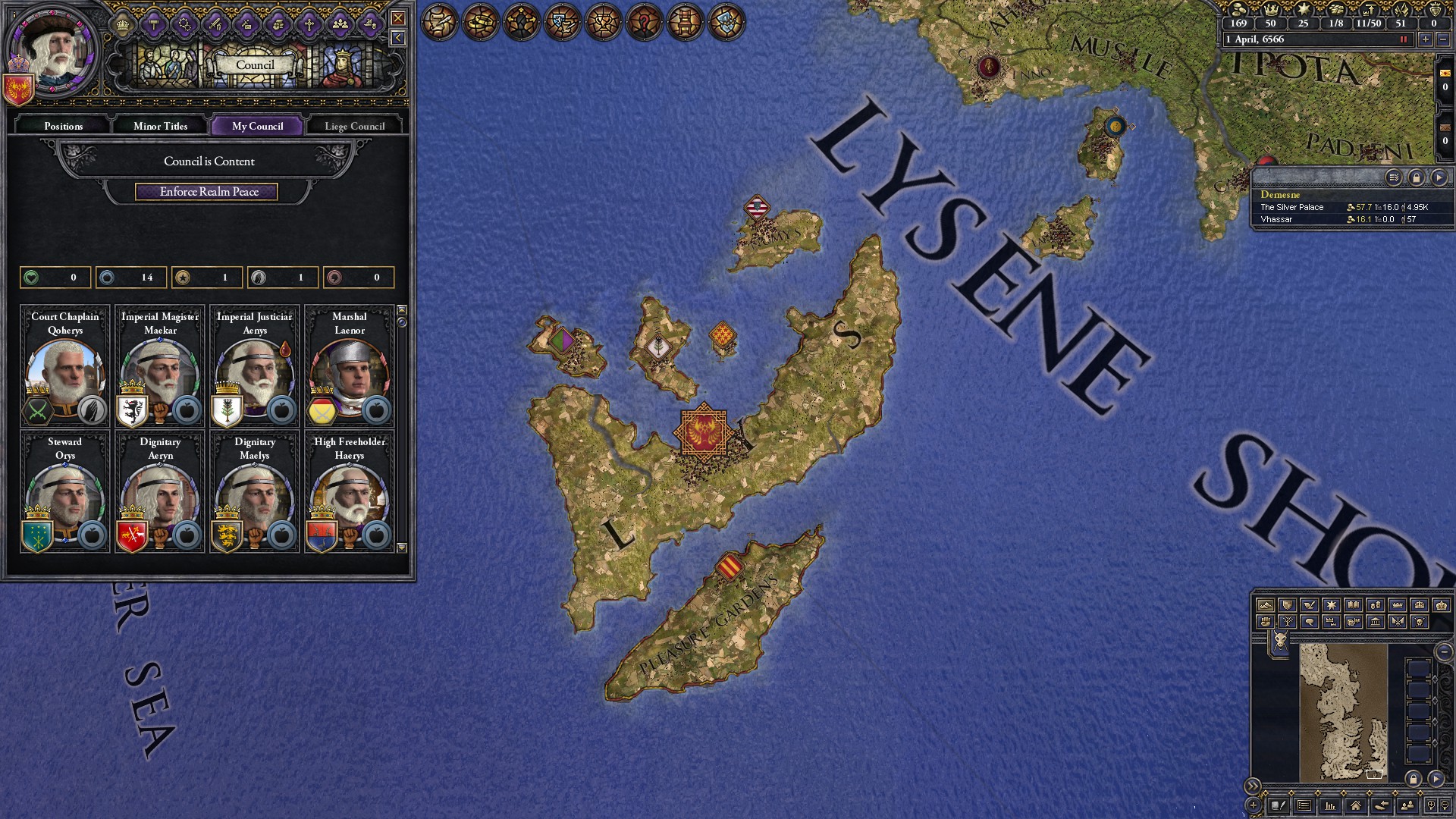 An increase in the number of council positions for the Freehold and Bureaucratic Councilship. Enjoy endless deadlock in politics. Such immersion! 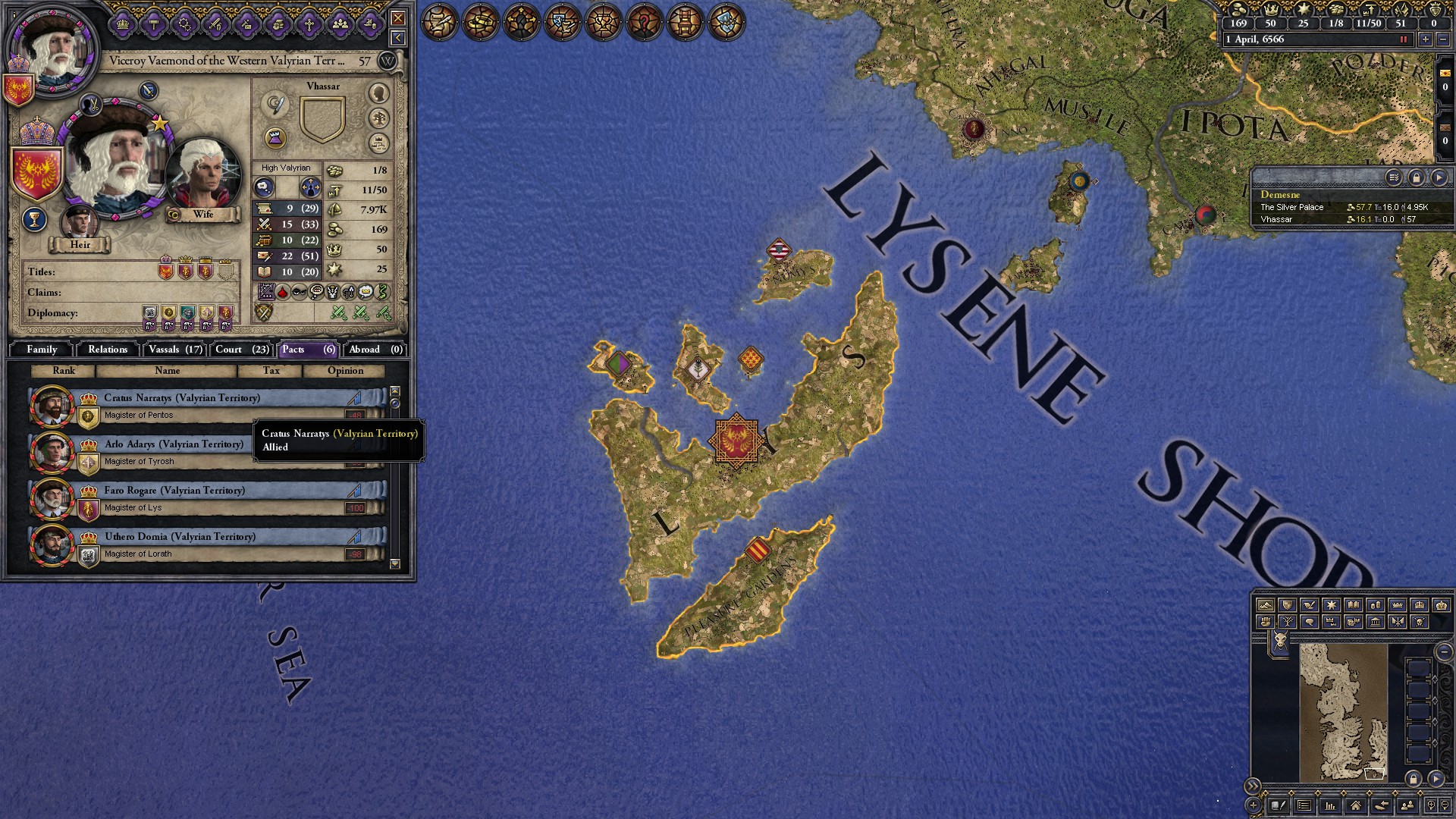 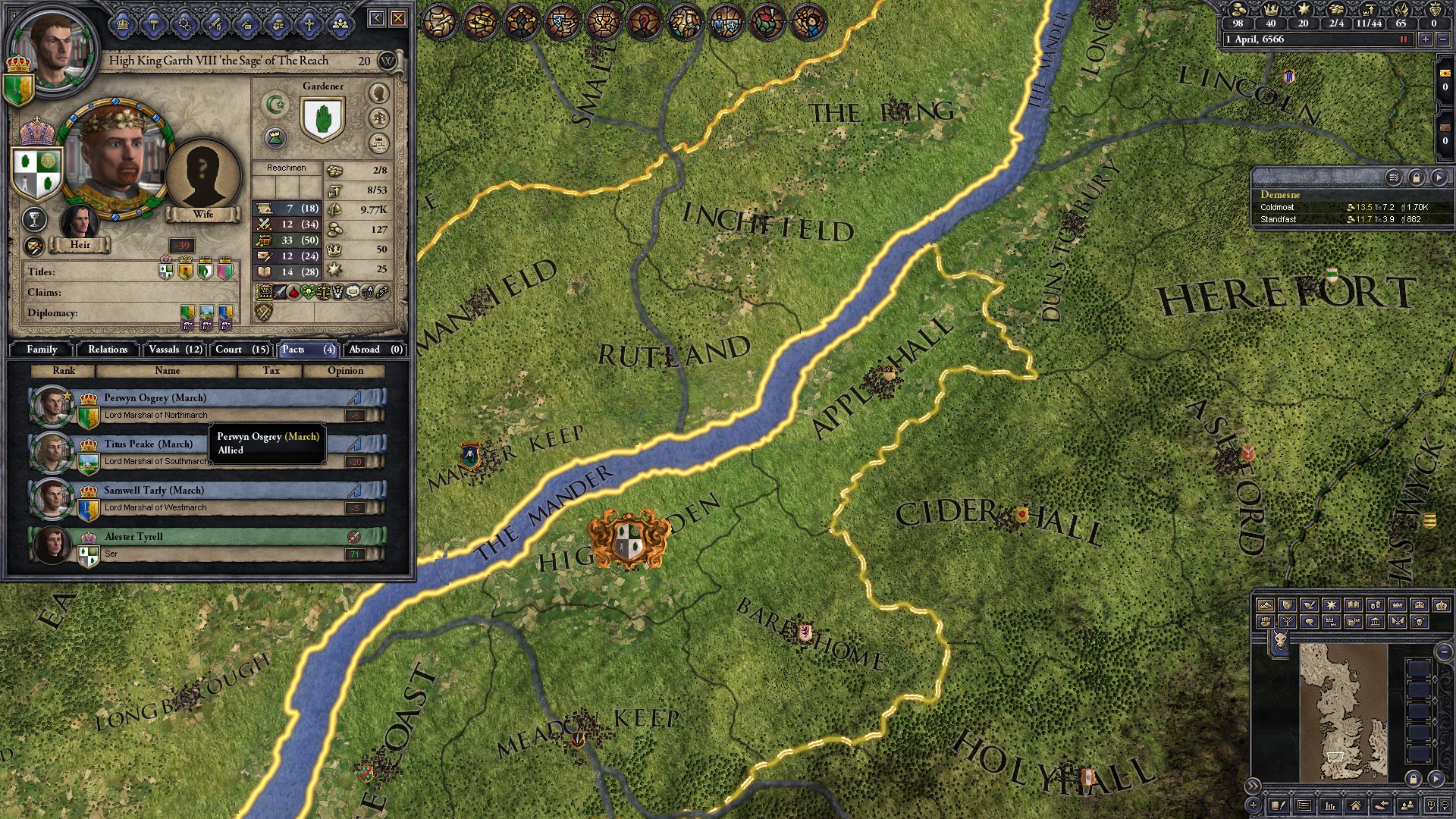 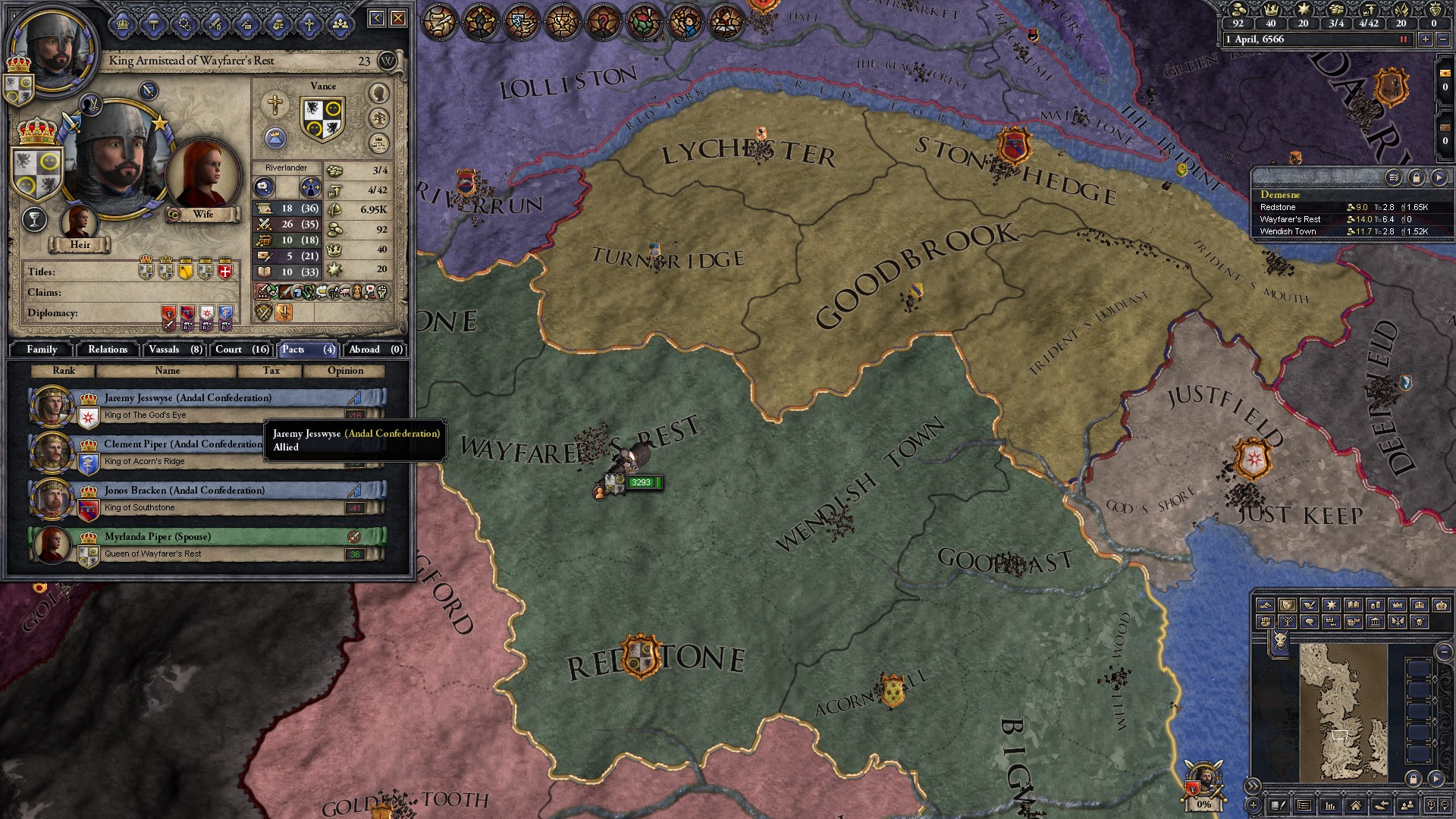 New tributary types to increase the variety of relations between the Kingdoms and Republics of Essos and Westeros. 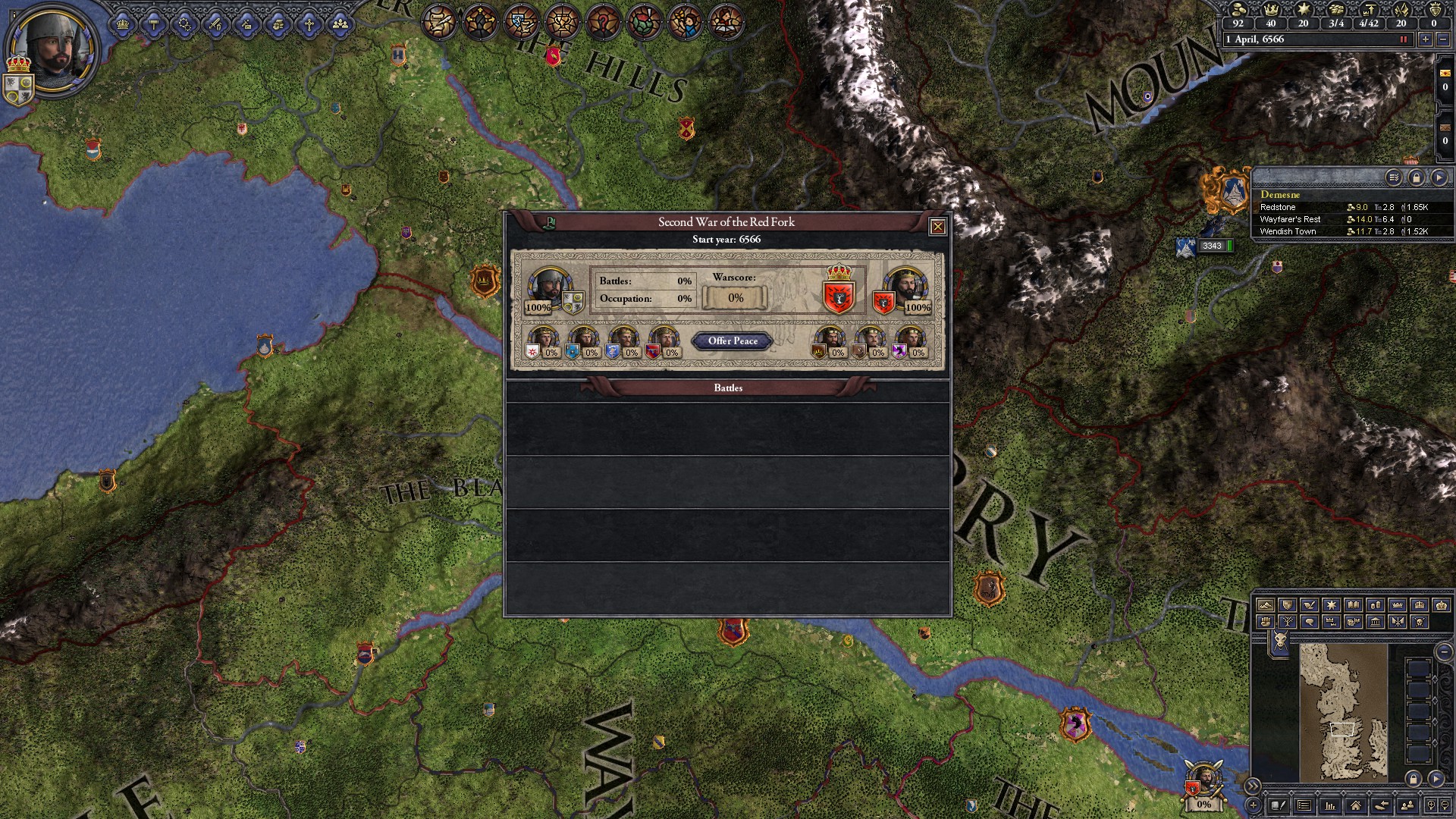 A new starting scenario in the Riverlands. 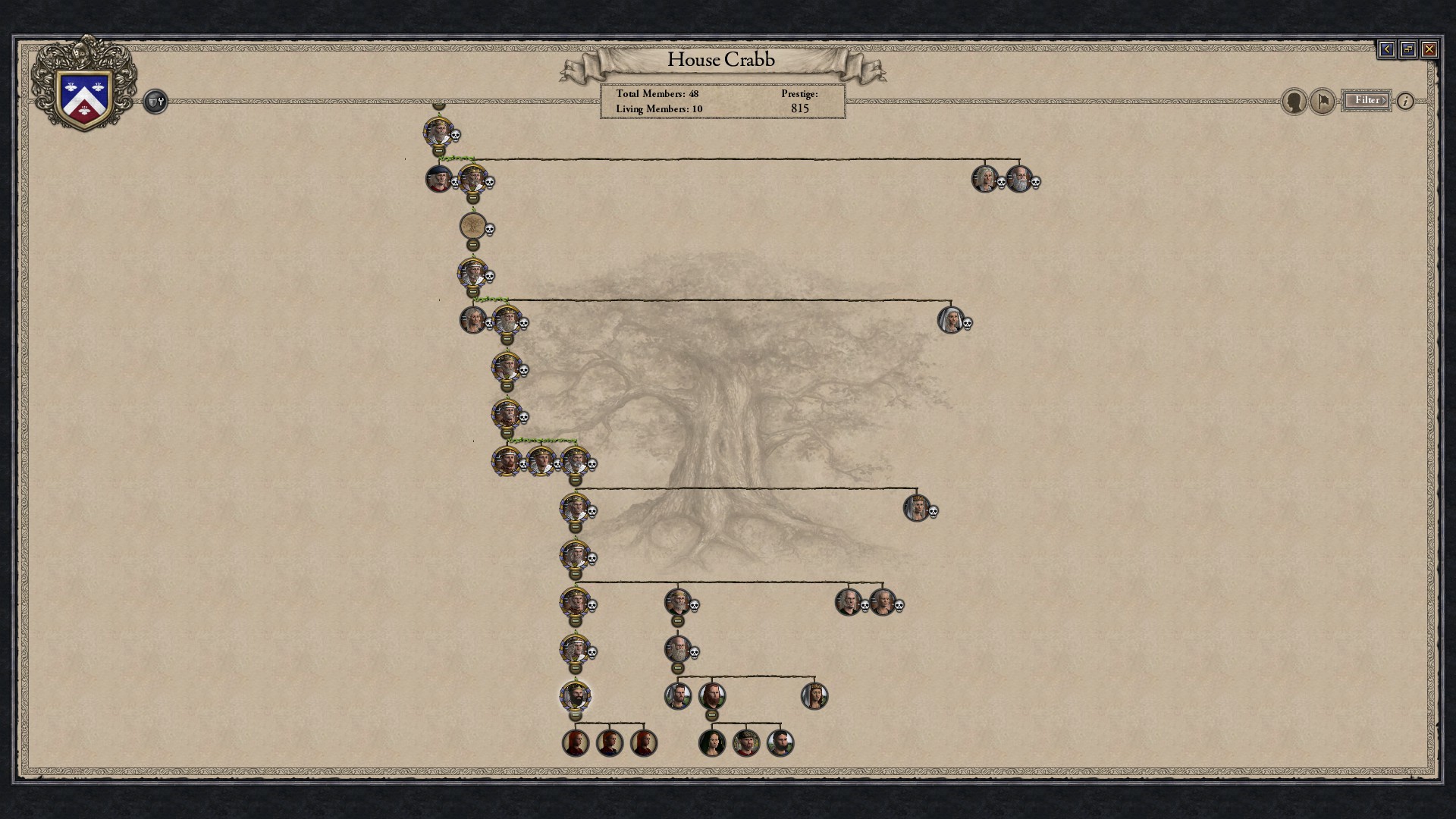 New history to increase the population and amount of interesting characters in the world. 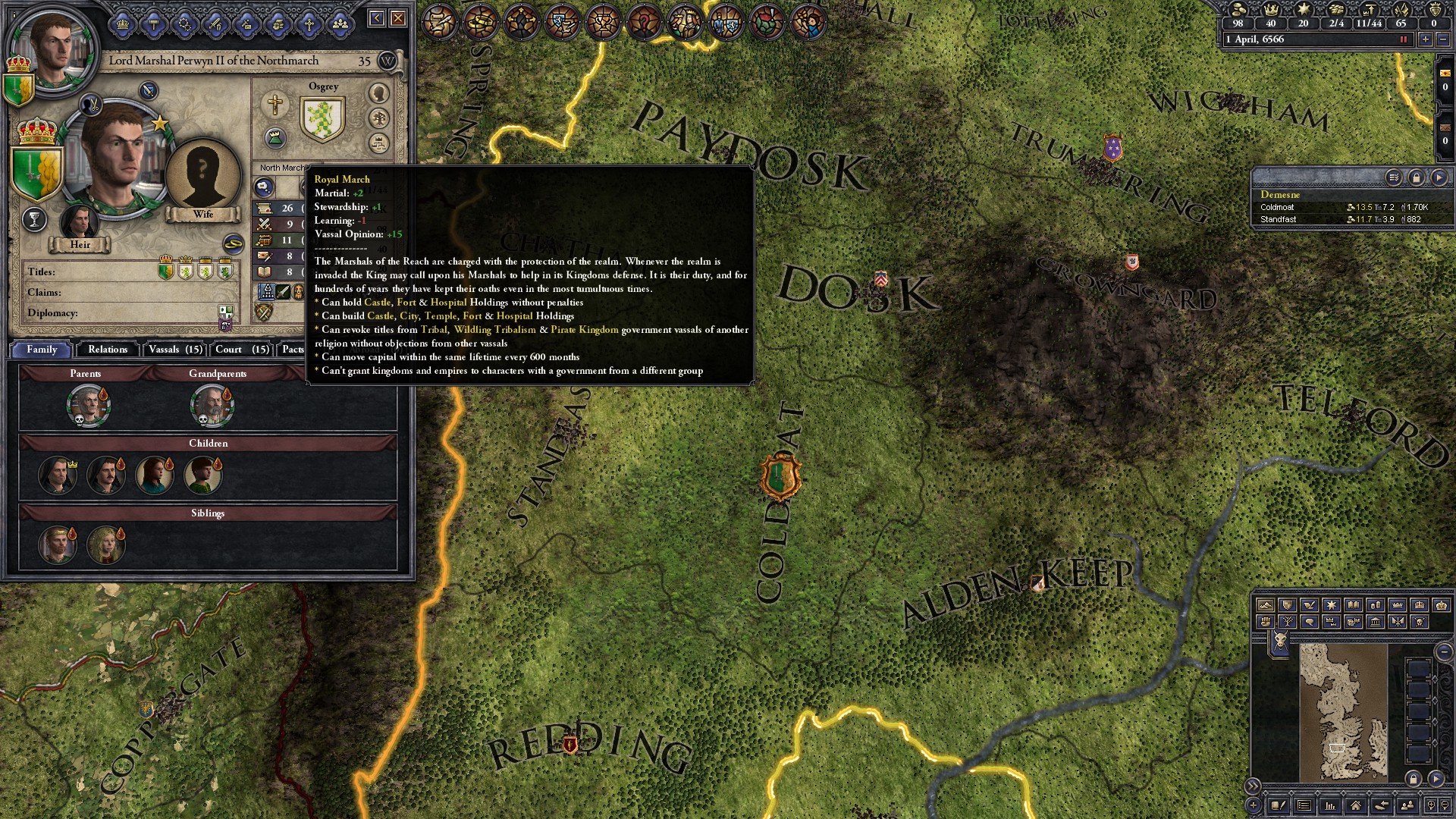 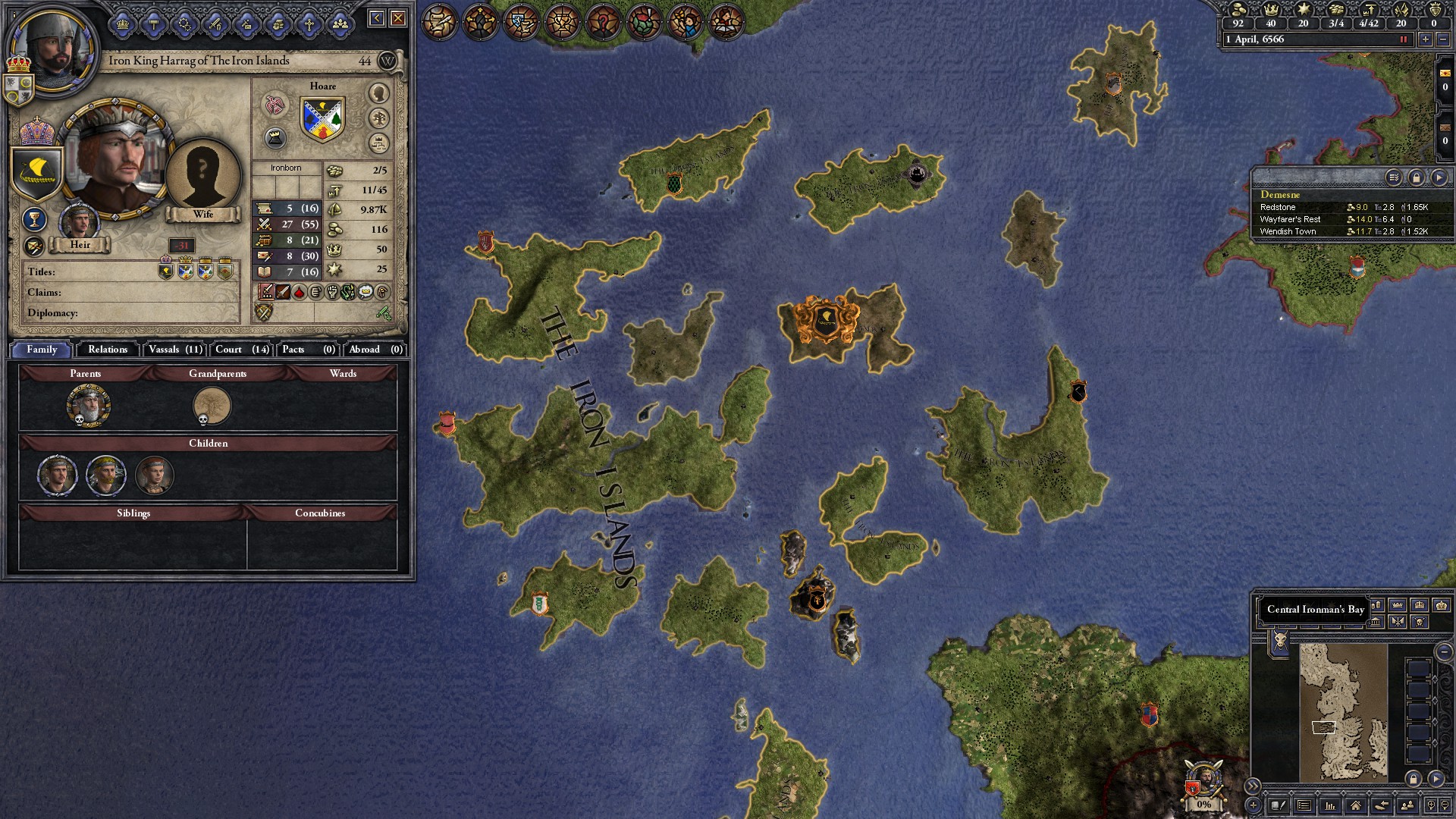 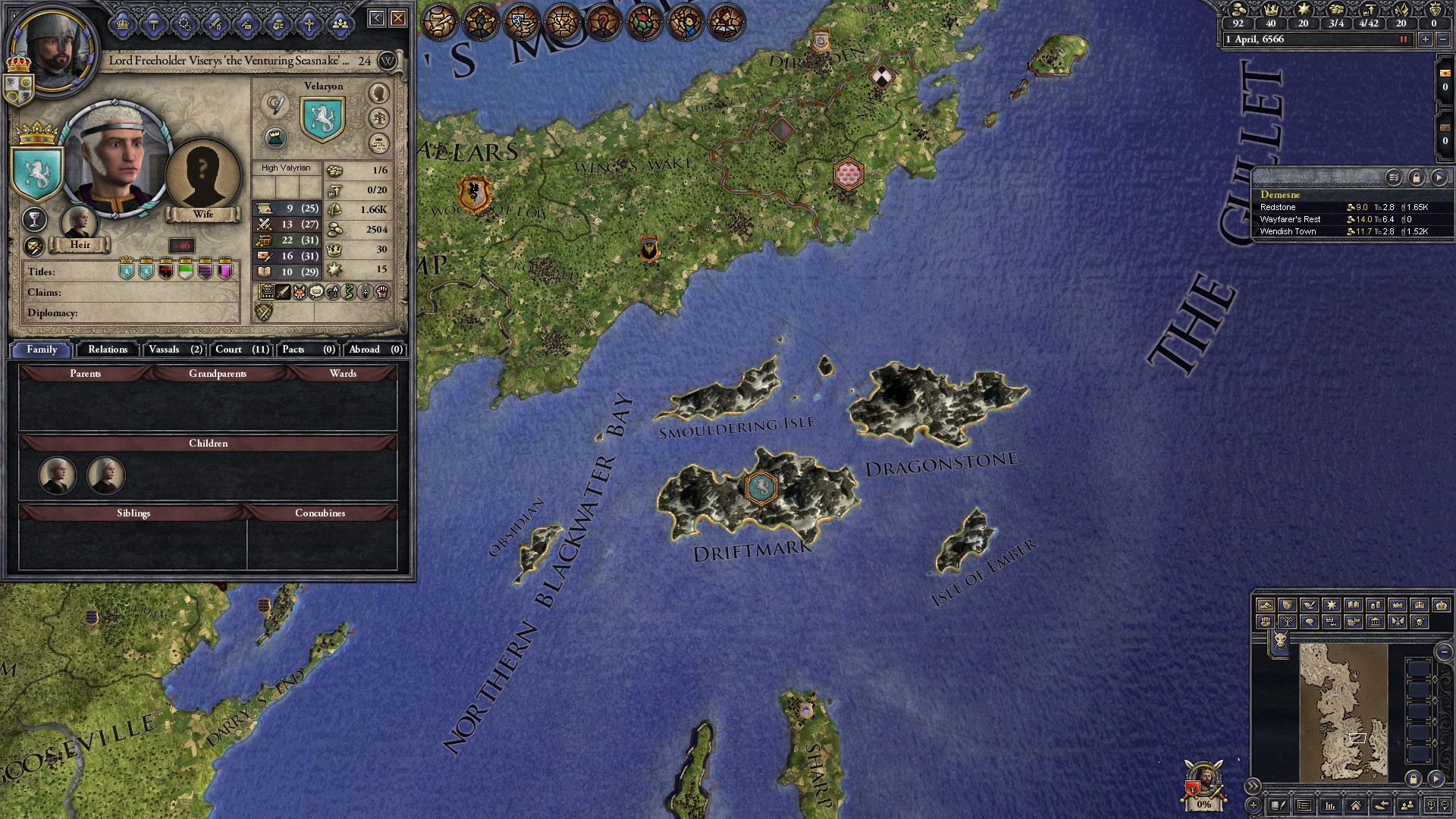 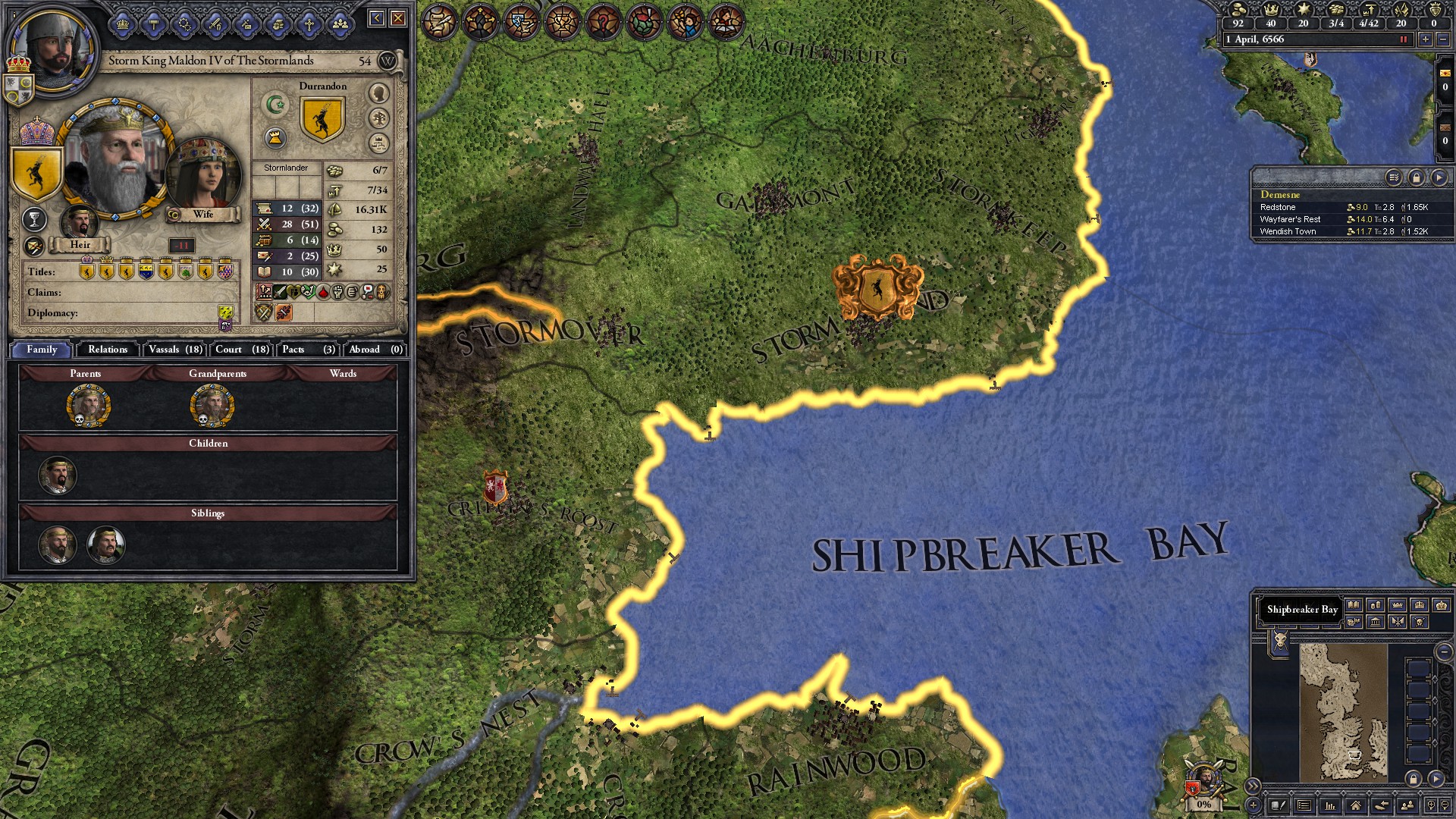 New governments to increase flavor. They are also a work in progress. 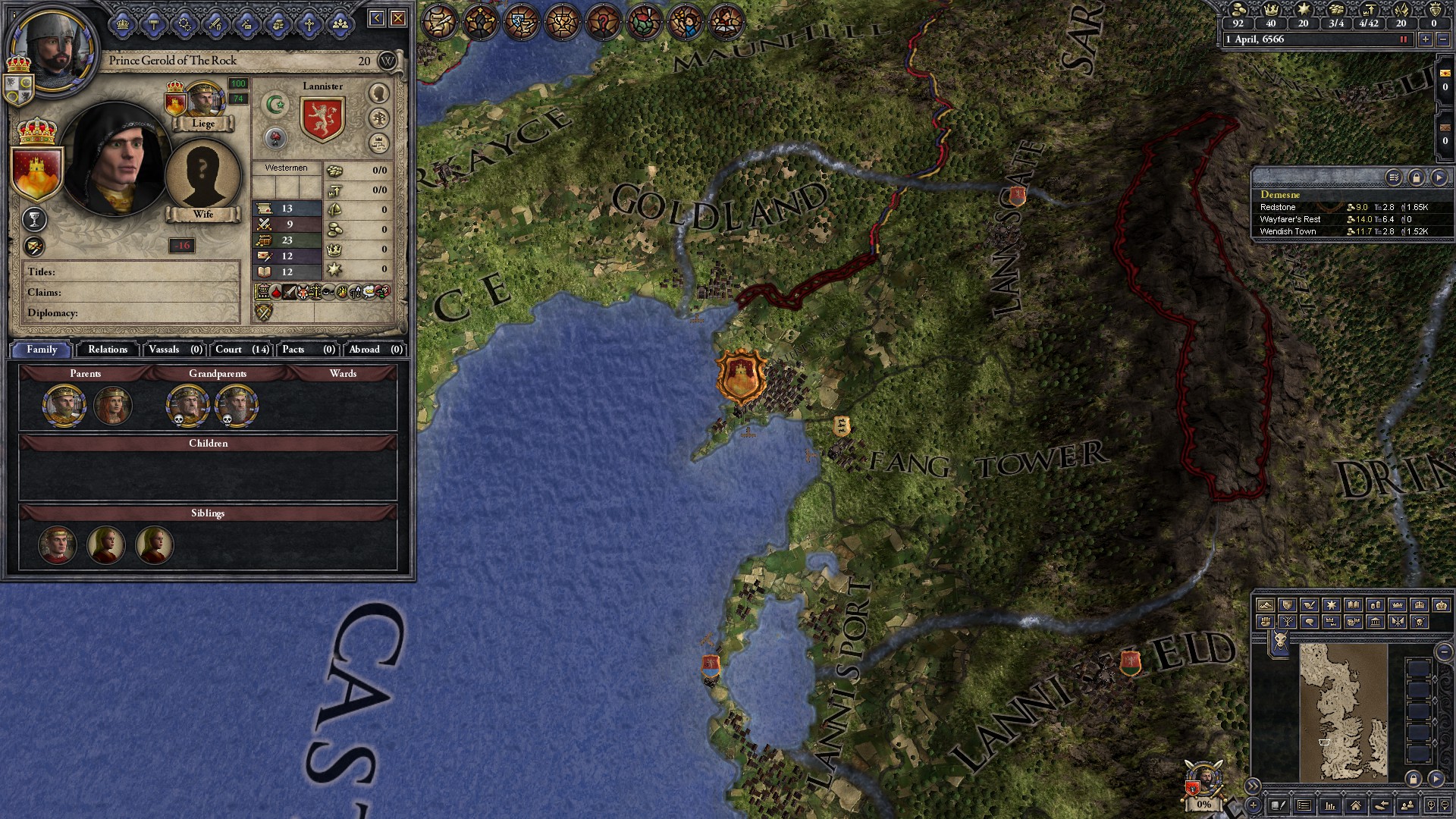 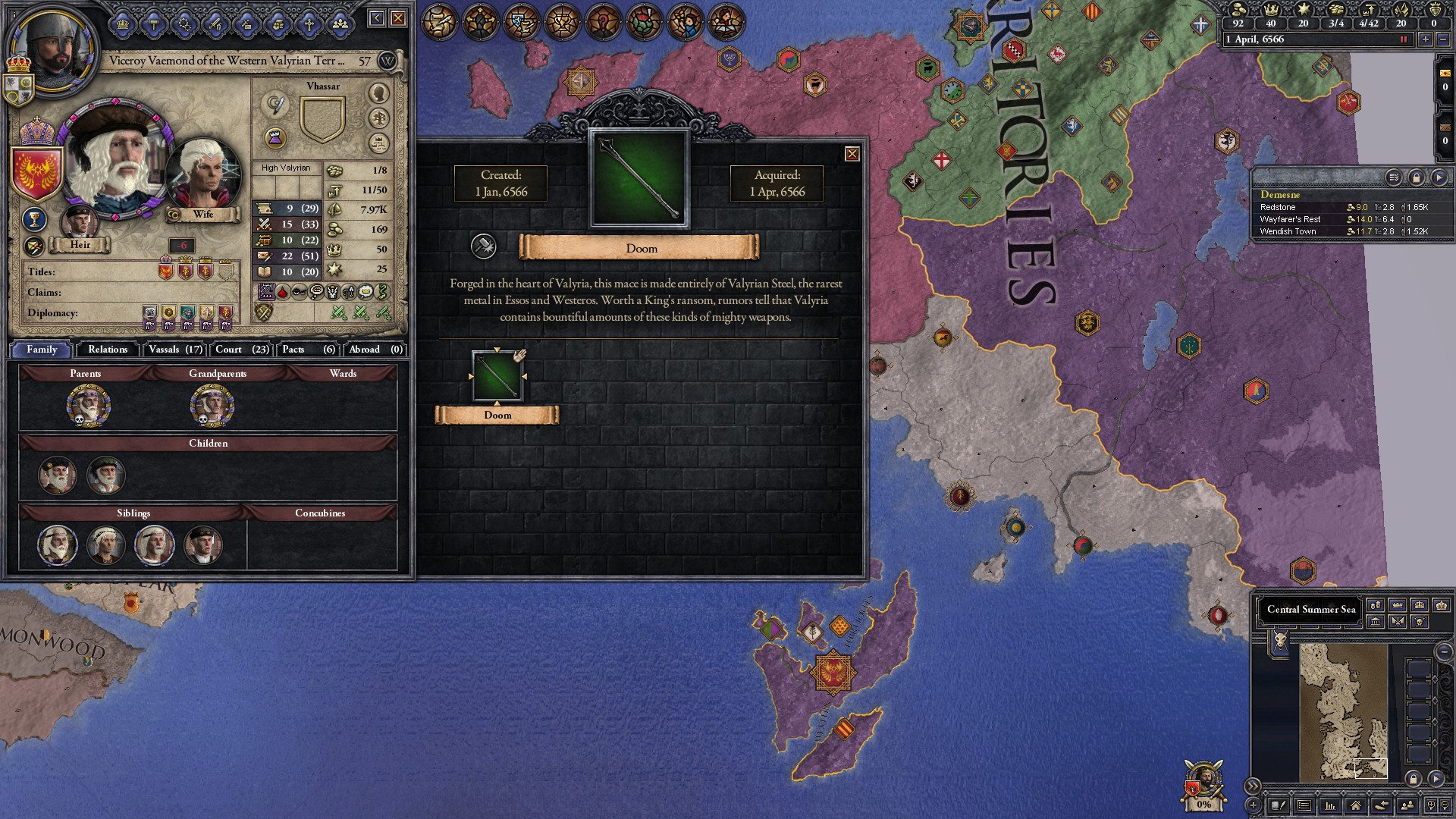 New graphics for many cultures and artifacts. 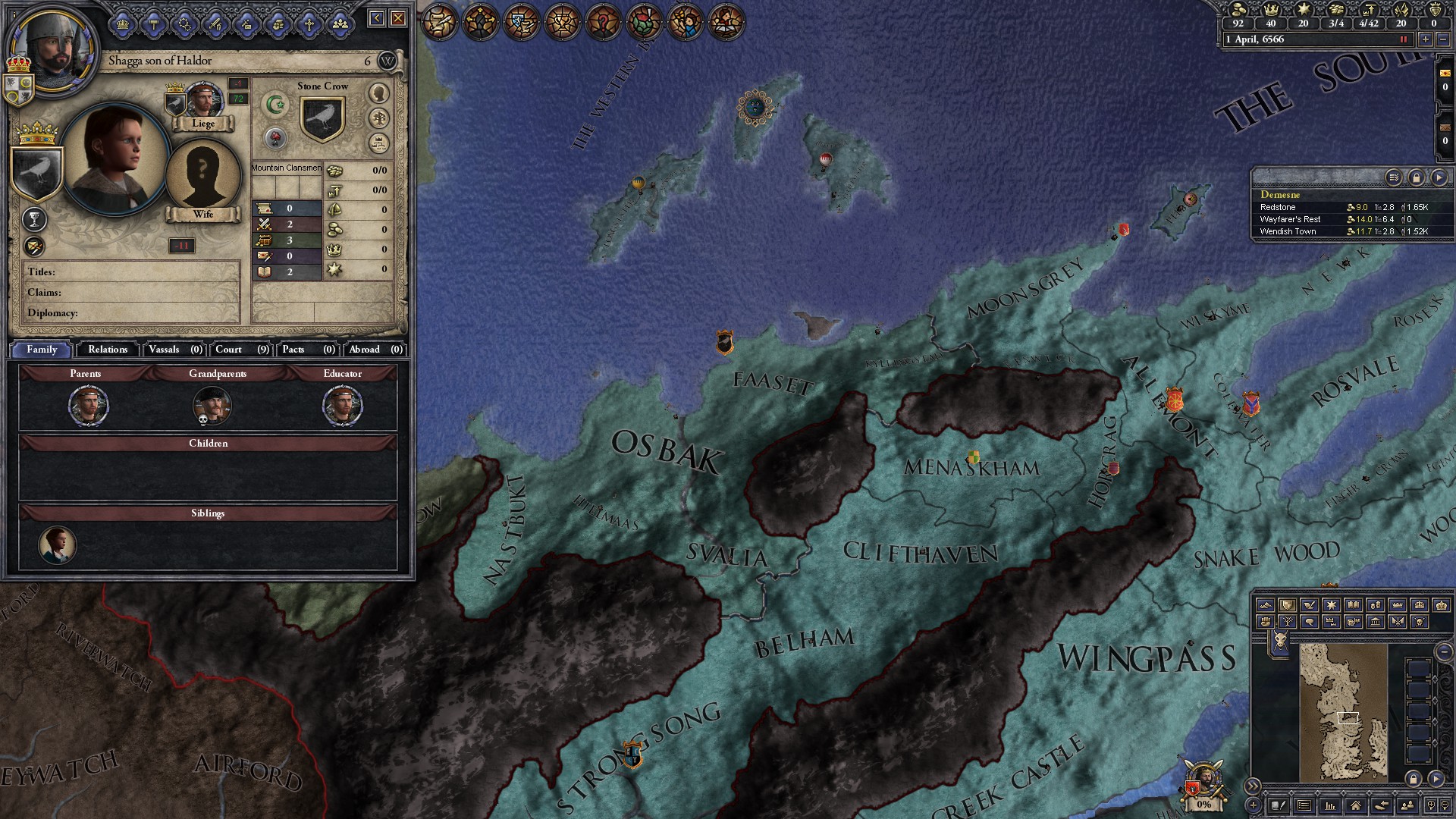 And much much more.

If you have any questions or inquiries about the mod, or wish to join the team please feel free to ask. We are always looking for more people to help enhance the experience of the Seven Kingdoms. The update following this one will include things such as dueling, magic, dragons, and new bookmarks.

Thank you all again! I will see you on the battlefield.

A quick preview of the next version which includes many new features such as knighthood, green dreams, and much much more.

A quick update showing off some of the new features that can be found in v7.

A list and explanation of the changes to the mod this time around.

Event popup spam means you are not on the latest CK2 Version! Use 2.7.1! For CK2 2.7.1. Please delete old versions before installing. Install into Documents/Paradox...

The Seven Kingdoms A8 [Outdated]

The Seven Kingdoms A7 [Outdated]

The Seven Kingdoms A6 [Outdated]

For CK2 2.7.1. Please delete old versions before installing. Install into Documents/Paradox Interactive/Crusader Kings II/mod This build should be stable...

For CK2 2.7.1. Please delete old versions before installing. Install into Documents/Paradox Interactive/Crusader Kings II/mod This build should be stable...

Quick question. Is the mod fully dead, or has it been moved to a steam only mod. Because I saw that there the mod is still somewhat being updated. Oh, and one more thing in regards to the mod being updated. Will the mod ever be updated here, and will there be a new release?

Mod had to be moved to steam only, as we were contacted by Paradox and told to do so.

This rule doesn't apply to a number of older overhauls, due to being grandfathered under older rules, which did not prohibit uploading to other sites. We were unaware of this at the time.

Hello, can i play any house(faction) in the mod(never played CK2 before, but if it follows the EU4 line, i should be able, right?)?

Can i get the current version somewhere other than steam? it never downloads ck2 **** properly for me, and i'm not gonna uninstall/reinstall my game just to try a mod.

This mod is not updated yet to ck2 3.0 in steam

For now it's a seven, just about everything works as designed, with a few minor bugs, and already has a lot of detail. Considering it's an alpha, maybe I should rate it a ten, but I'll rate as if it's any other mod. I'm sure this score will go up.

Concubines for all Crusader Kings II