“A Game of Thrones” (AGOT) is a full-conversion mod for Paradox Interactive’s Crusder Kings II (CK2). Set in the world of George R. R. Martin’s A Song of Ice and Fire (ASoIaF) fantasy saga where lords great and small vie for control over the lands of Ice and Fire, from Westeros and the Seven Kingdoms in the west, to Qarth in the east. The mod takes its name from the first book in the series, as well as the “game” of plots and politics the ambitious and hopeful are said to be playing in their struggles for supremacy. Currently players are able to choose to play from any start date in the 300 years from before the Aegon's Conquest to the beginning of the fourth book (A Feast for Crows).

What makes this mod different from Crusader Kings II?

Besides the obvious, which is a new interactive rendition of the fictional low-fantasy medieval setting of ASoIaF, you’ll notice a host of changes that build off the framework of the original (vanilla) CK2 game. In CK2, players battle against other rulers for control of various independent realms and kingdoms. In AGOT, while the potential exists for the realm to fragment into multiple kingdoms, in practice it very rarely happens. Players instead fight to control just one throne – the Iron Throne, forged by Aegon I Targaryen “the Conqueror” almost three centuries prior to the events of this saga. Additionally, events from CK2 have been adapted to fit within the lore and flavour of A Song of Ice and Fire. Some notable new features to mention; A new dueling engine so that lords may fight each other in personal combat on (or off) the battlefield; An all-new method for personal interaction between characters; Pets that (sometimes greatly) aid characters in battle; And a host of less significant (but no less important) features that together help create a solid and serious effort at bringing Westeros to life for gamers. The mod also utilizes features from various other mods, listed in detail in the credits section.

While CK2 and AGOT contain Role-Playing (RP) elements, this mod is not a full narrative recreation of the books. Just like CK2 and other grand strategies, the mod is dynamic in allowing players the freedom of exploring “What If?” scenarios. What if Robb captured King’s Landing? What if Stannis and Renly joined forces against Joffrey? What if Rhaegar Targaryen had killed Robert on the Trident instead of the other way around? All these things can, and may, happen in the mod, with or without the player’s choice. No game will ever be the same, whether you win or you die.

I hope everyone has been enjoying 1.0, and thanks to everyone who has given feedback and bug reports, it is really helpful.

Ever since the Horse Lords DLC was released, some have been wondering what we are doing with the nomad mechanics, and why they weren't utilised in the 1.0 release. We do intend to use them for the Dothraki, as they are pretty much made for them! However, currently the nomads are only active if the DLC is turned on, leaving them to be normal tribal rulers if not. This is not good for us as it means we would have to maintain both the old system for those without the DLC and the nomad system for those with it.

For the next vanilla patch however, Paradox will be kindly adding a modding option allowing us to make the nomads active even if the DLC is not present (of course making them still unplayable). So we have been busy integrating the nomad mechanics ready for the next patch: 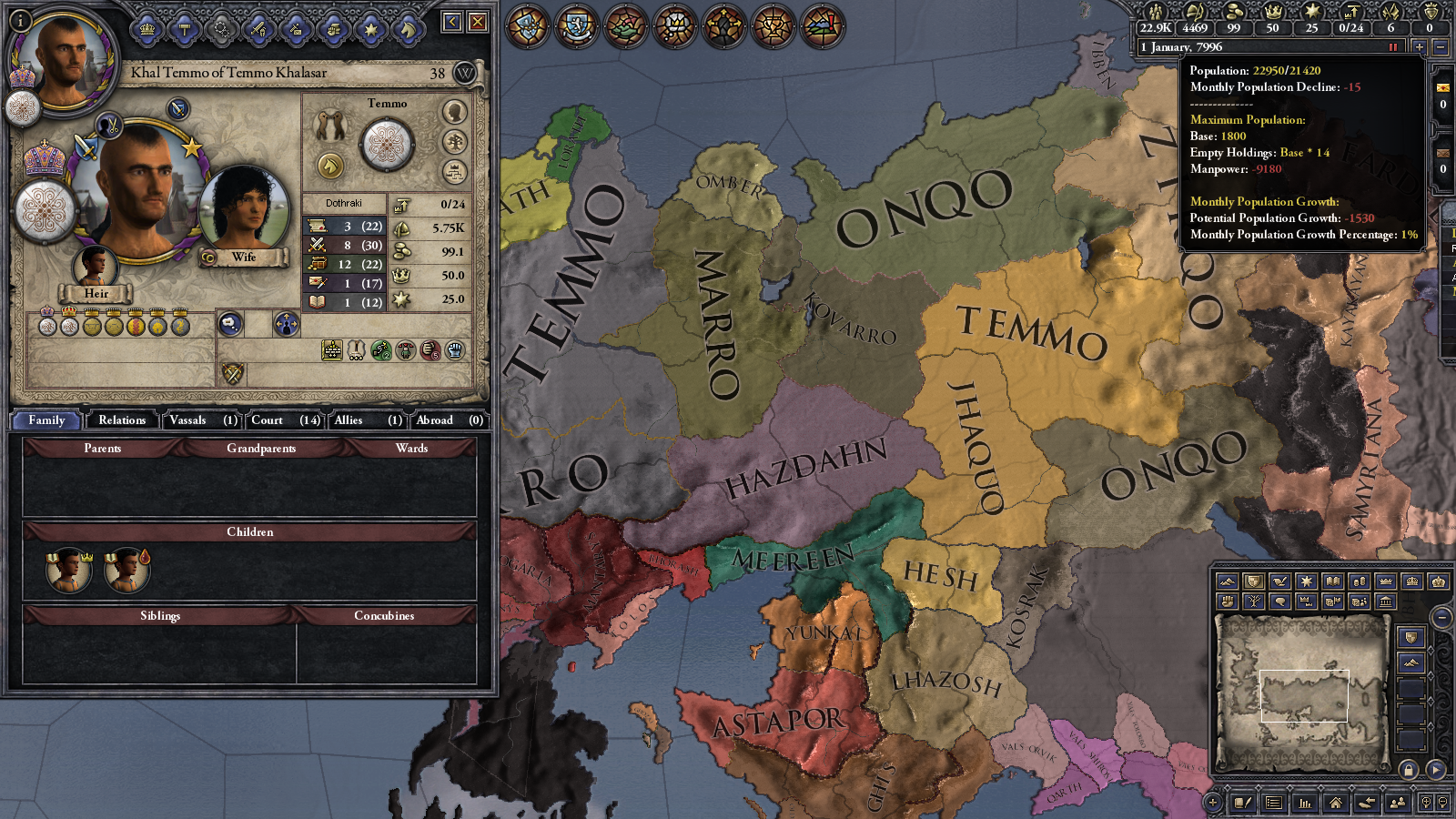 The mechanics are pretty much the same as they are in vanilla. Each Khalasar is divided into clans which compete for power within the Khalasar. Each has a population and manpower which allows it to expands its armies, which function much like vanilla 'retinues'. Here is an example of a Khalasar which has taken over the whole Dothraki Sea: 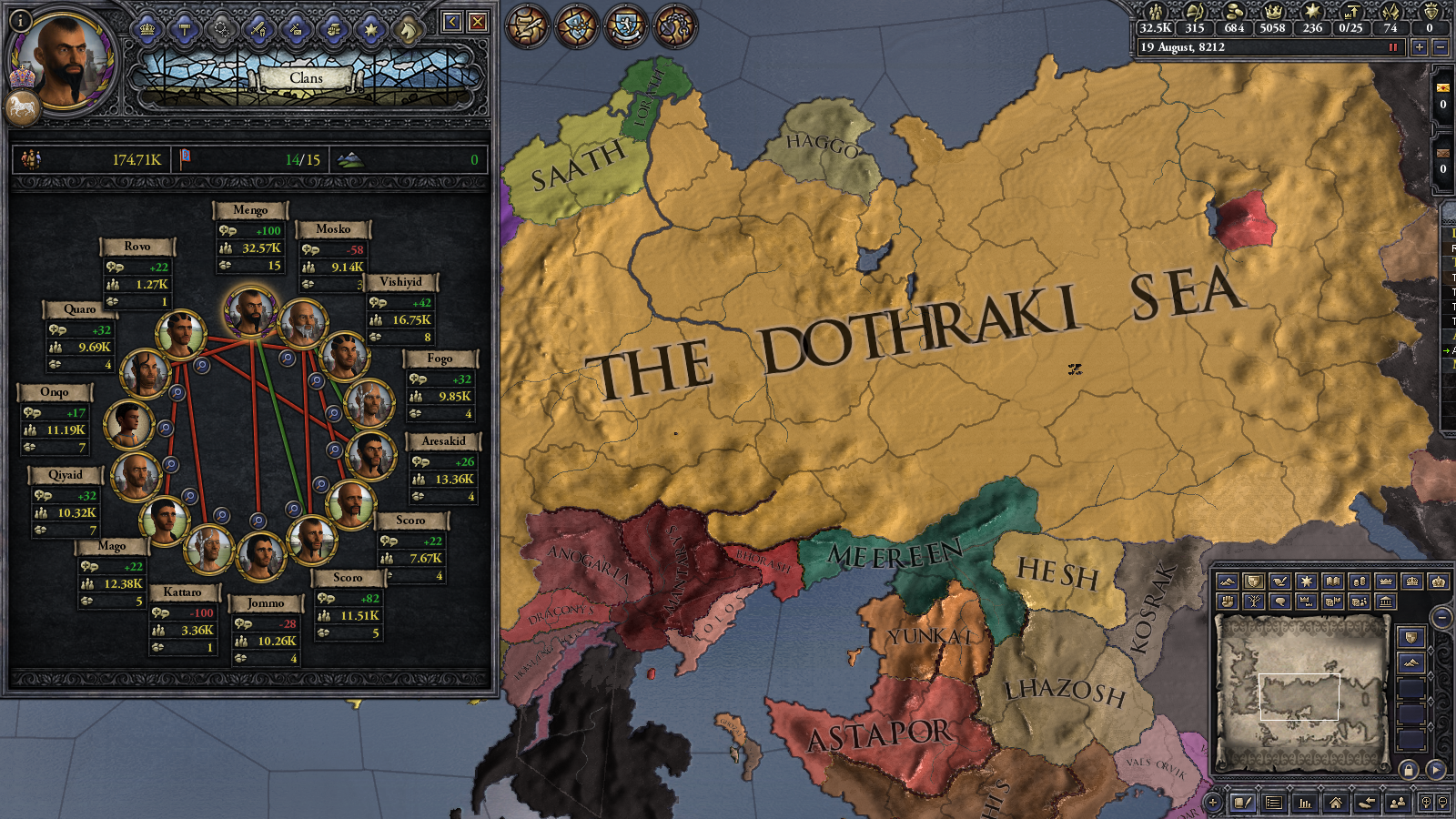 One major change we have made is the fact clans, as well a significant chunk of their own clan, will not hesitate to abandon a weak Khal when they inherit: 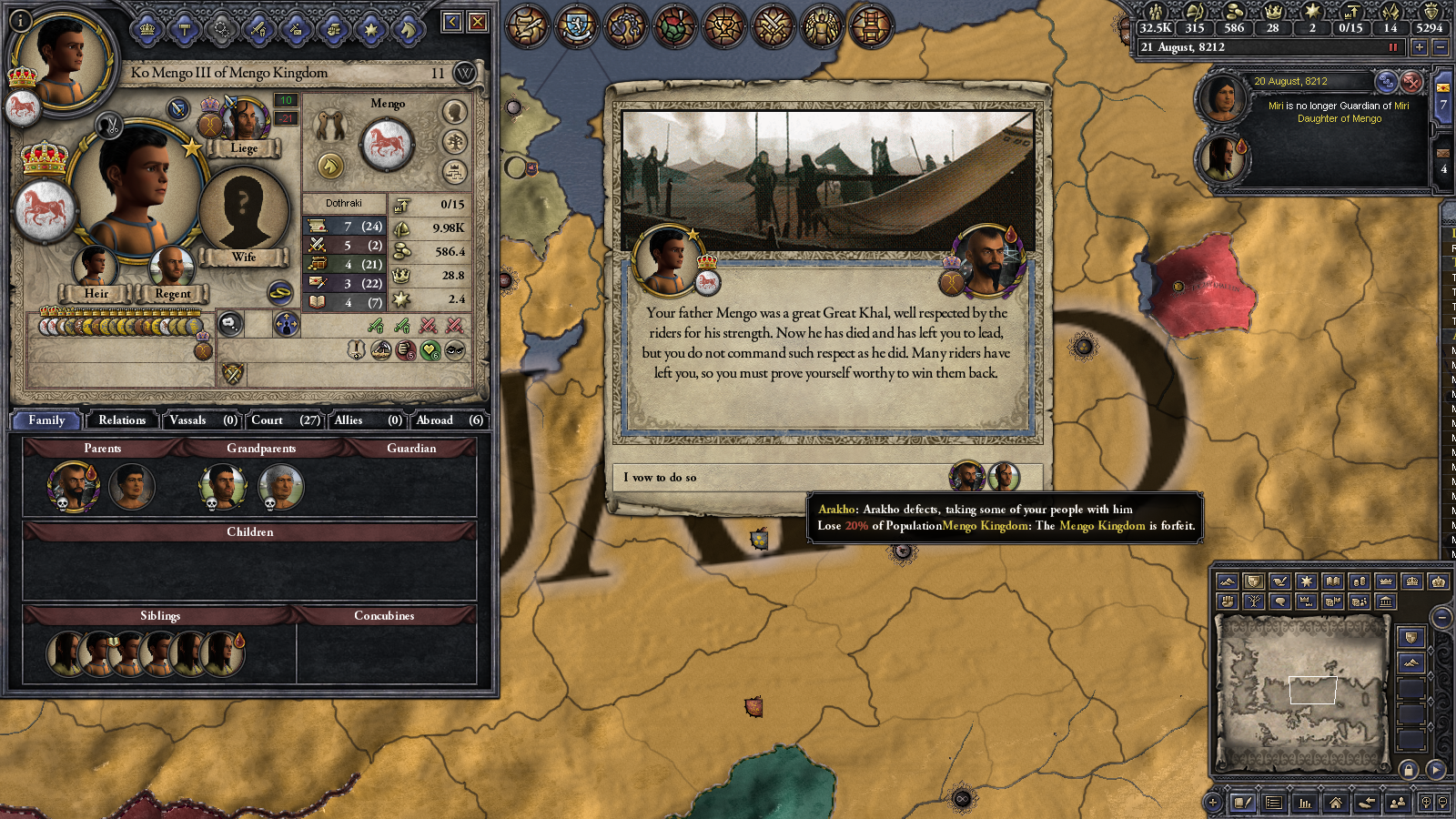 The casus belli system is also similar to what we had before. Dothraki can raid their neighbours and defeat rival Khals, but only those who unite the Dothraki Sea can invade beyond: 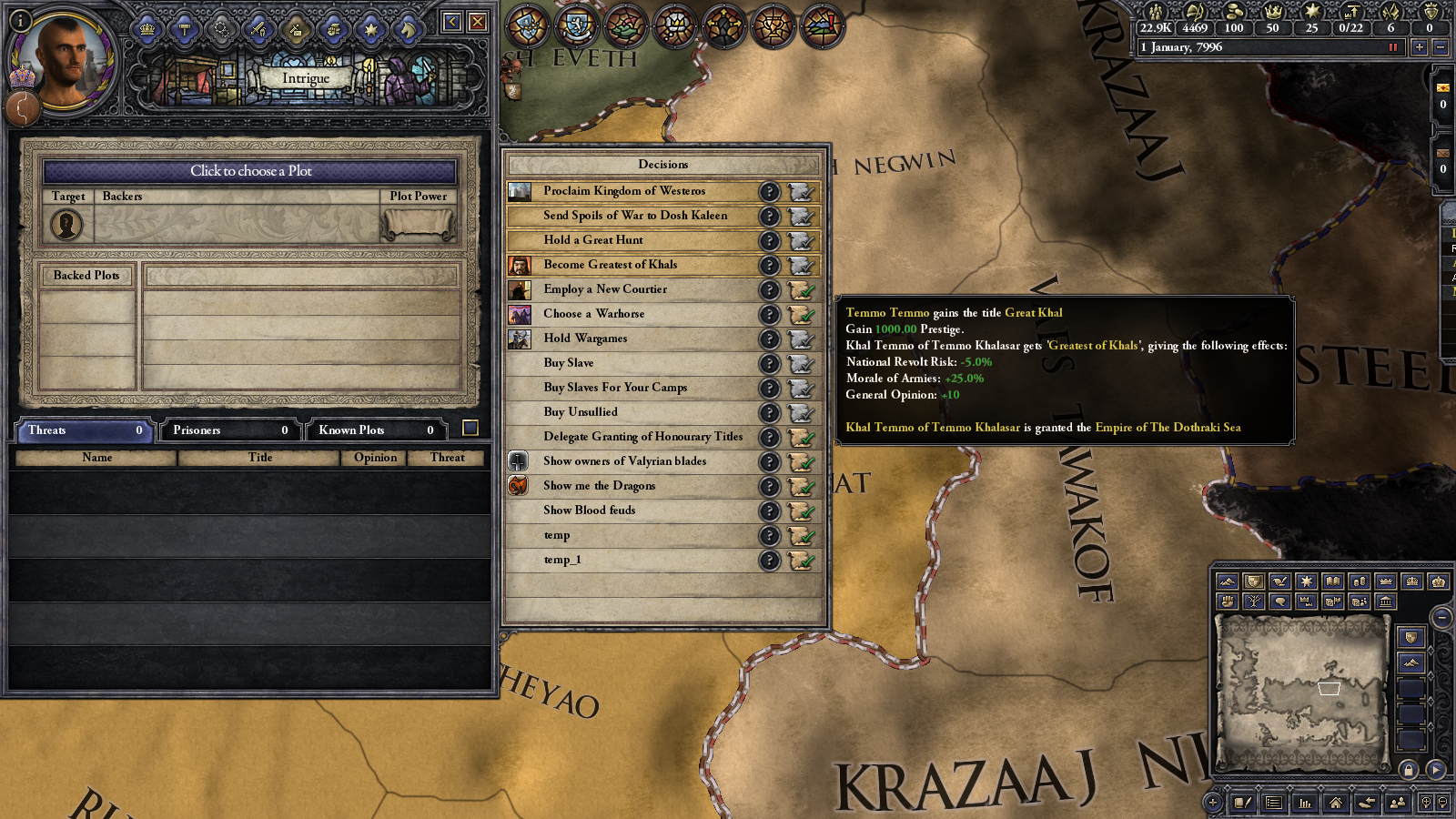 The Jogos Nhai have also been integrated with the nomad mechanics. Their main unique feature is the fact they are forbidden to make war on eachother, as their gods forbid them to shed the blood of their own people. Instead they can either claim grazing lands in minor raids, or diplomatically expand: 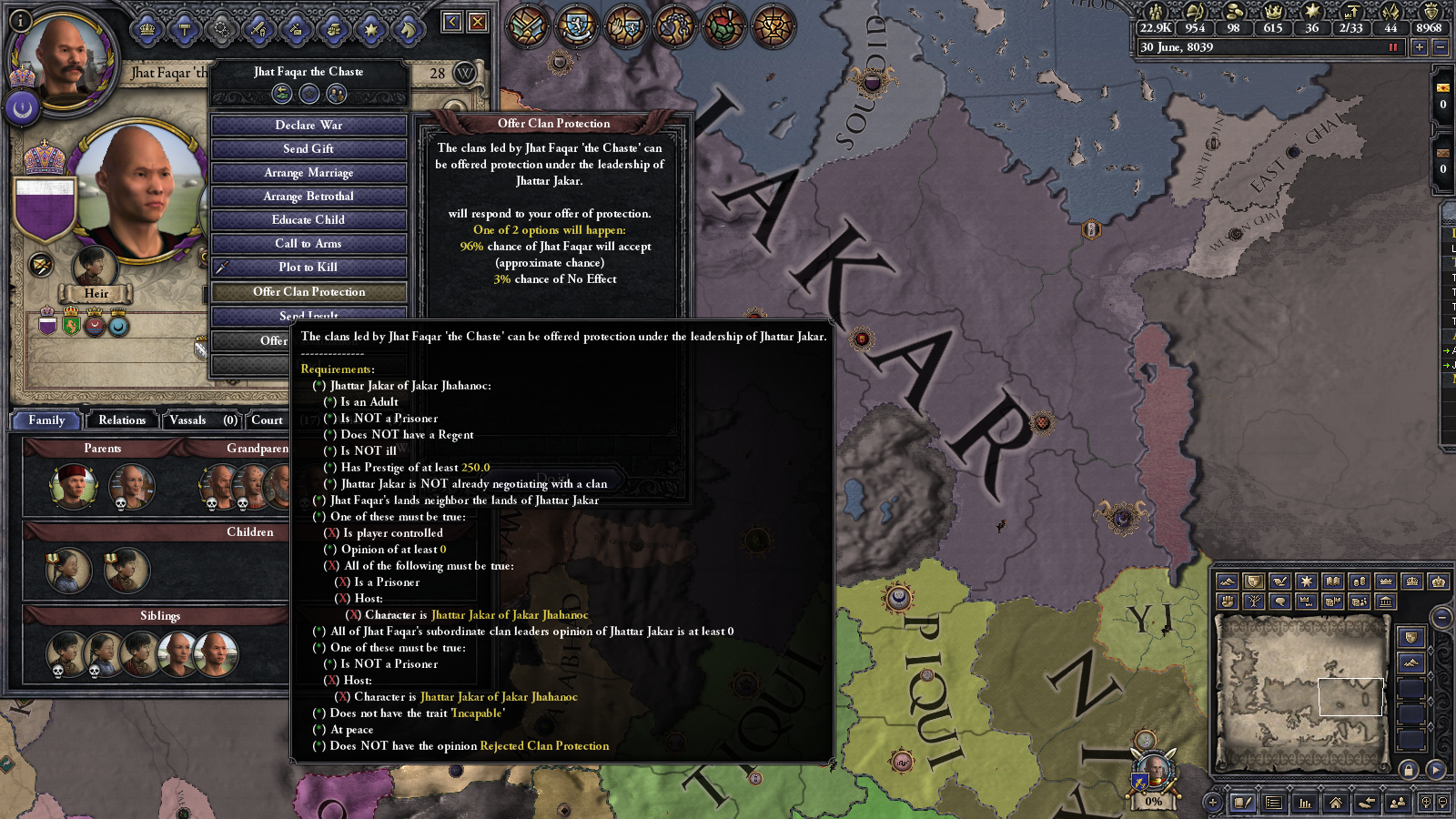 This will all be in the next update once the next vanilla patch is with us. In the meantime if you want to learn more of the nomad mechanics you can read the vanilla dev diaries here: Forum.paradoxplaza.com

Here are some bonus screenshots, showing a couple of other small things that we have been working on: 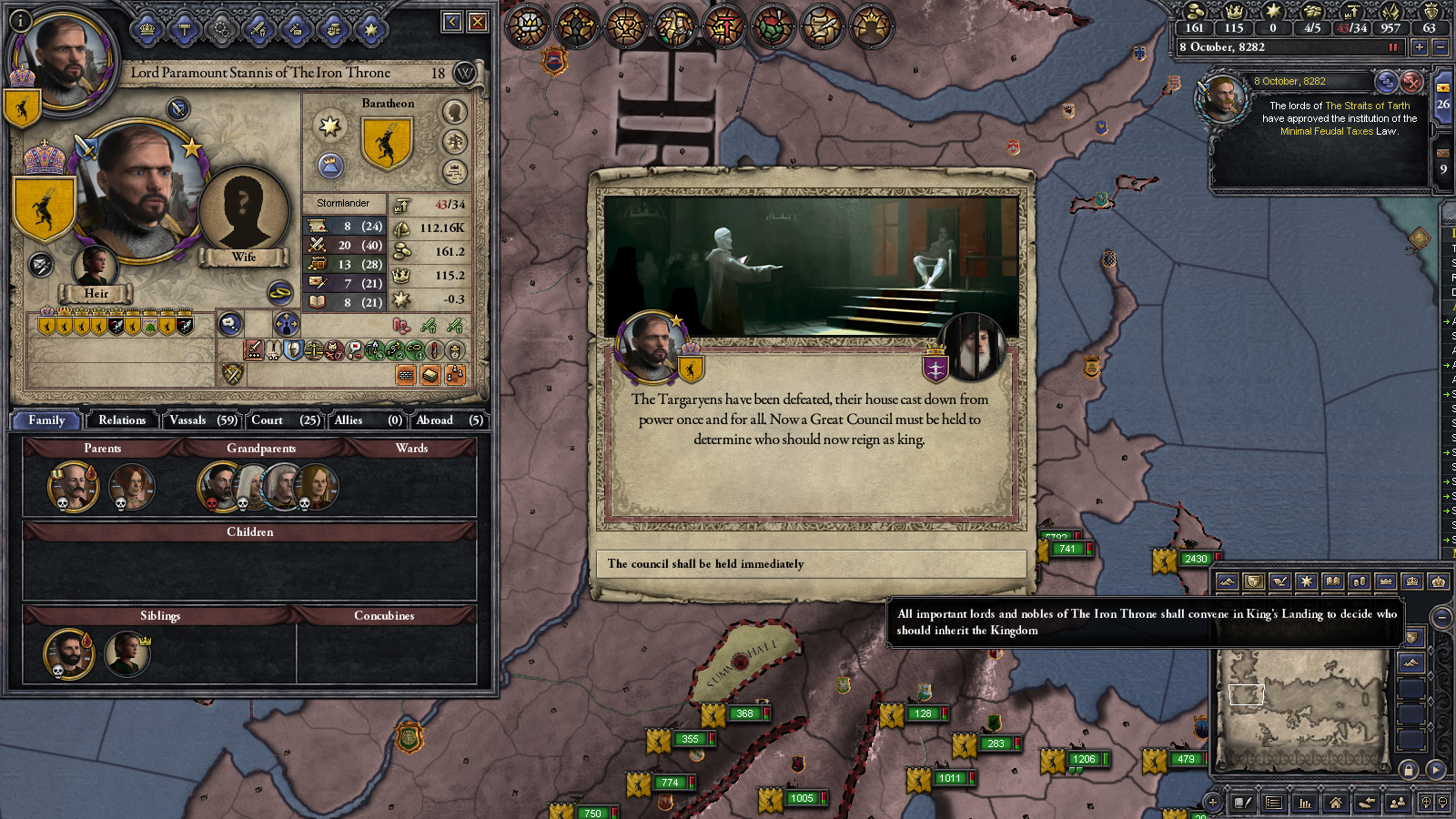 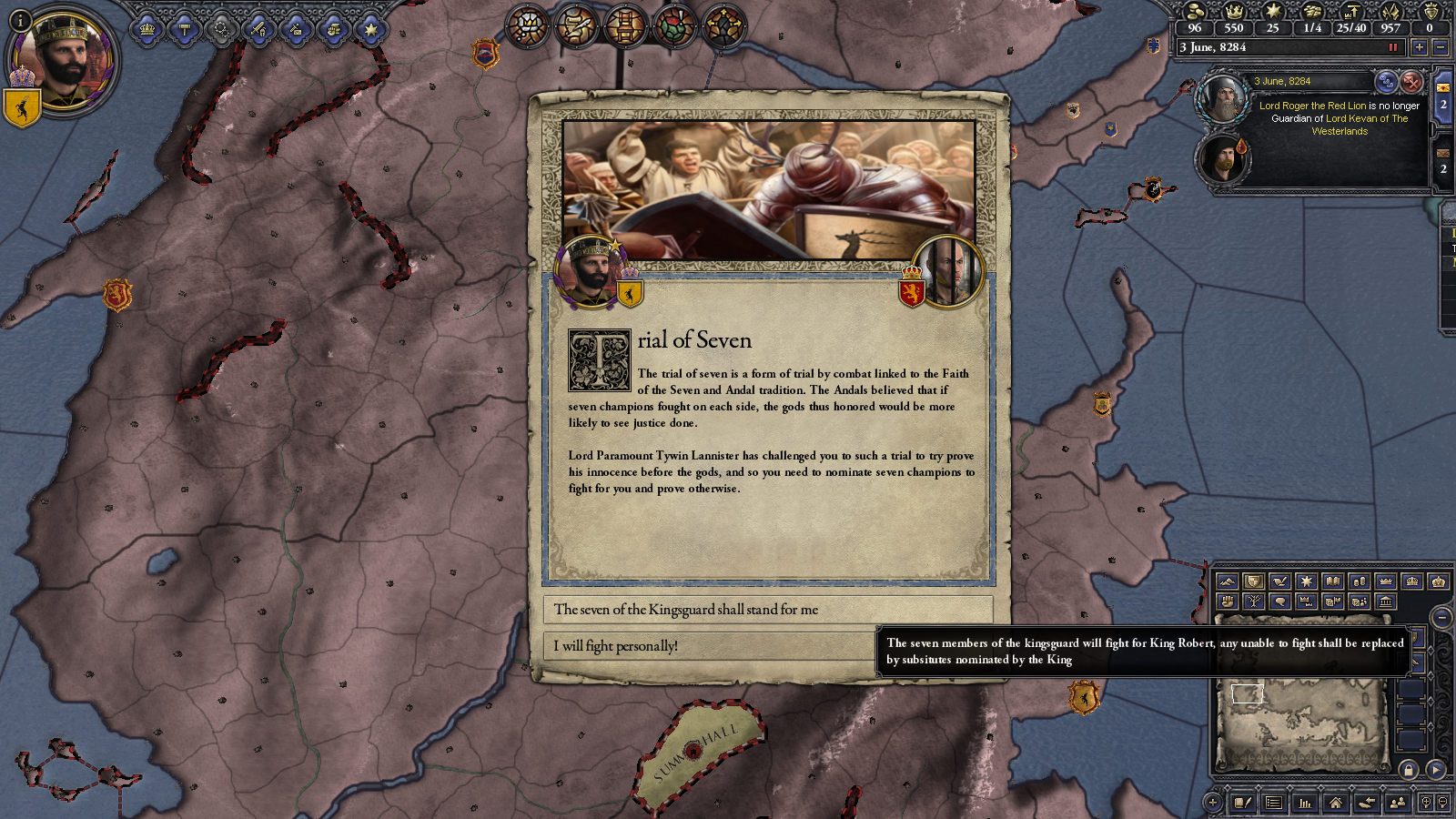 And merry christmas to all!: 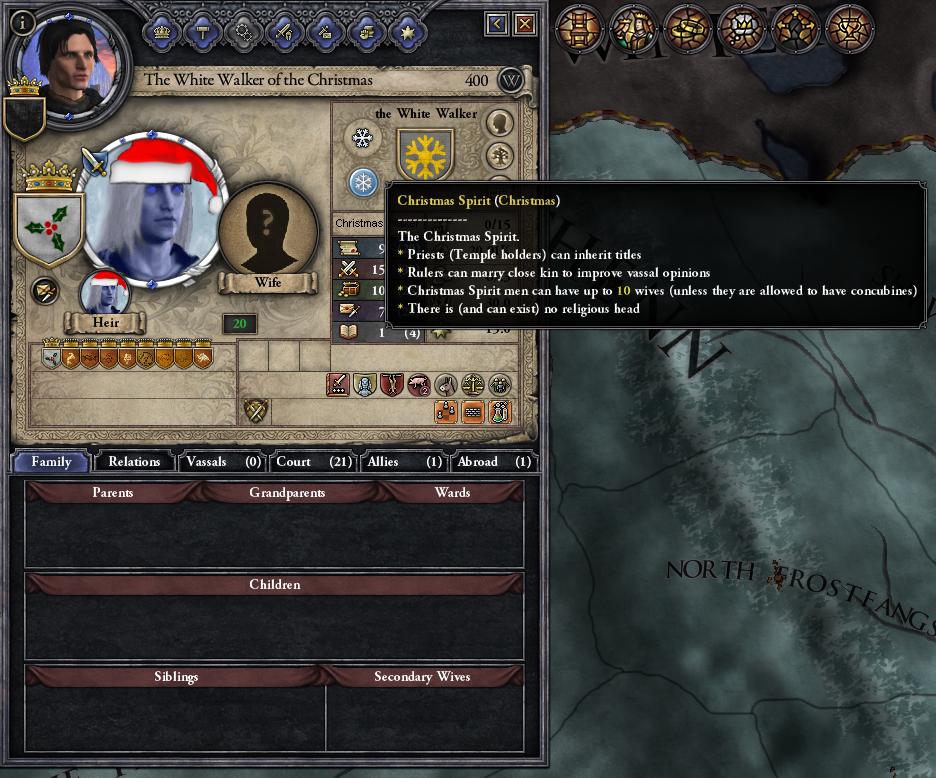 Here is announced the release date of ESSOS into the mod.

We are making some progress toward ESSOS (the famous eastern continent). We are aiming for a release this month.

CK2:AGOT 0.4.0.1 has been released. Grab it on the download page and please don't forget to rate us.

How to be compatible with Sketchy Cheat Menu?

Is it just me who feel like we need Eddard Stark's bones added into the game as an artifact, sure It's a bit morbid I grant you but, I feel like it would add to the game's roleplaying, as big Stark fan I feel like if you manage to win the war for Northern Independence and capture King's Landing, you shouldn't just get Ice back but your father's bones as well if the Iron Throne hasn't already sent them as in the book and show.

If you could decide on returning important prisoners remains if they die or is executed or destroy them completely would add to the game, plus rivals could try to intercept or steal them in order to destroy them like Lady Barbrey Dustin says she wants to do with poor old Ned's bones in the books.

I just think they are too busy with the new AGOT mod for CK3 right now, but hopefully they will update this one too at some point again.

Well, they're now working on the CK3 version on the mod, so probably until it releases in 2025 or something.

If you ever get tired of the shallow non-combat mechanics of CK3 and Paradox mods in general.

Axioms Of Dominion is entering early access in December.

This will probably never catch on but I refer to the genre of Axioms as: Fantasy DIP Strategy

Think like a Paradox game crossed with an Illwinter game, crossed with Shadow Behind the Throne. Profile has links. There are also crafting and exploration systems like a better Eador/Thea.

Thought it would be kinda cool to marry a Targaryen bastard and seeing as most characters from the Game of Thrones 2012 video game has been added into the mod. I have looked around at diffent dates and I cant find her.

If she is in the mod please tell me dates and if she isent, would you guys mind adding her and possable her son and Maester Martin?

I have to review? What's there to review? Actually, why in the Seven Hells are you wasting time reading this? GO PLAY THIS MOD. Pronto. This mod is fantastic. The content is second to none - I play this more than the base game now. I originally looked to this to keep me occupied until The Old Gods, an expansion for Crusader Kings 2, comes out. But now, I'm worried that this mod will have thrown me off of it entirely. The scenarios are excellently done. Scripted events play out just like the books…