So here it is, one of the oldest mods for DoW is finally here! Started around ten years ago by MitGas and his team, this mod has been developed by several teams, leading finally to a public release via Team Thudmeizer.

During the Horus Heresy, Ahriman and the Thousand Sons declared their Allegiance to Tzeentch, the chaos God of change. Whilst this got them out of a short term pickle, it lead to massive mutations in the ranks, turning the marines into vile mutant beasts. Ahriman used his great psychic powers to engineer a solution - the Rubric of Ahriman - which prevented any further mutation, but did so by obliterating all of those who had no psychich abilities, leaving them as walking suits of armour. The surviving marines are those who have command of psychic powers and so enemies can expect an unusally high barrage of attacks fuelled by warp energies.

In the mod, players will command the powerful Sorcerer Lord, unique in that you must pick a class; destroyer, summoner or conjurer each of which has subclasses to choose the playstyle that suits the situation.

Choosing from a mixture of marine and daemon tech trees, the player can ultimately end up commanding Ahriman himself, who has a massive selection of spells to devastate the battlefield.

With a unique visual style, custom voices, models and FX then the Thousand Sons mod was well worth waiting for! 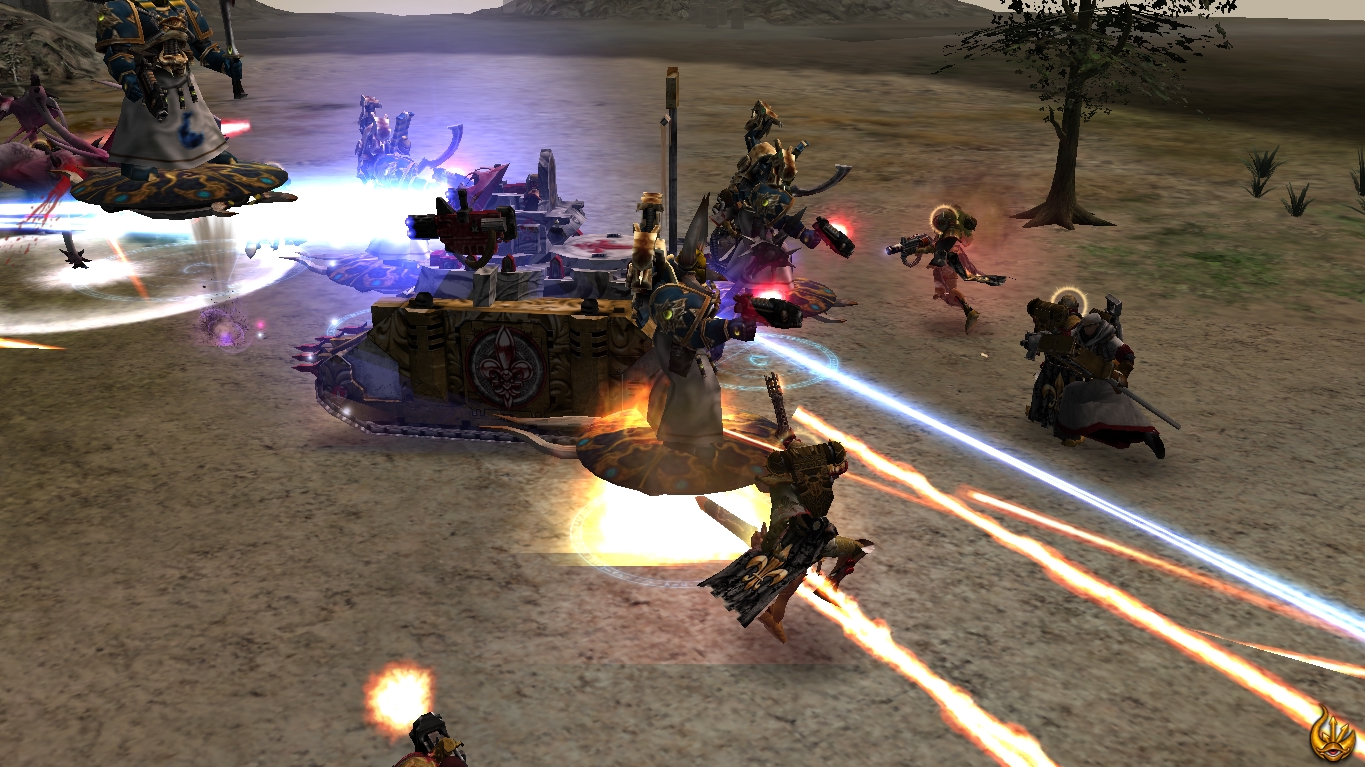 RELEASE NOTES
Though a beta build, Thousand Sons 1.71 is rock-solid. It is nigh official release, FULLY playable with excellent AI and complete system integration. We have extensively play-tested it, so expect solid gaming.
Once more, the AI has gone where no mod has gone before. Especially the coding for Ahriman is innovative. 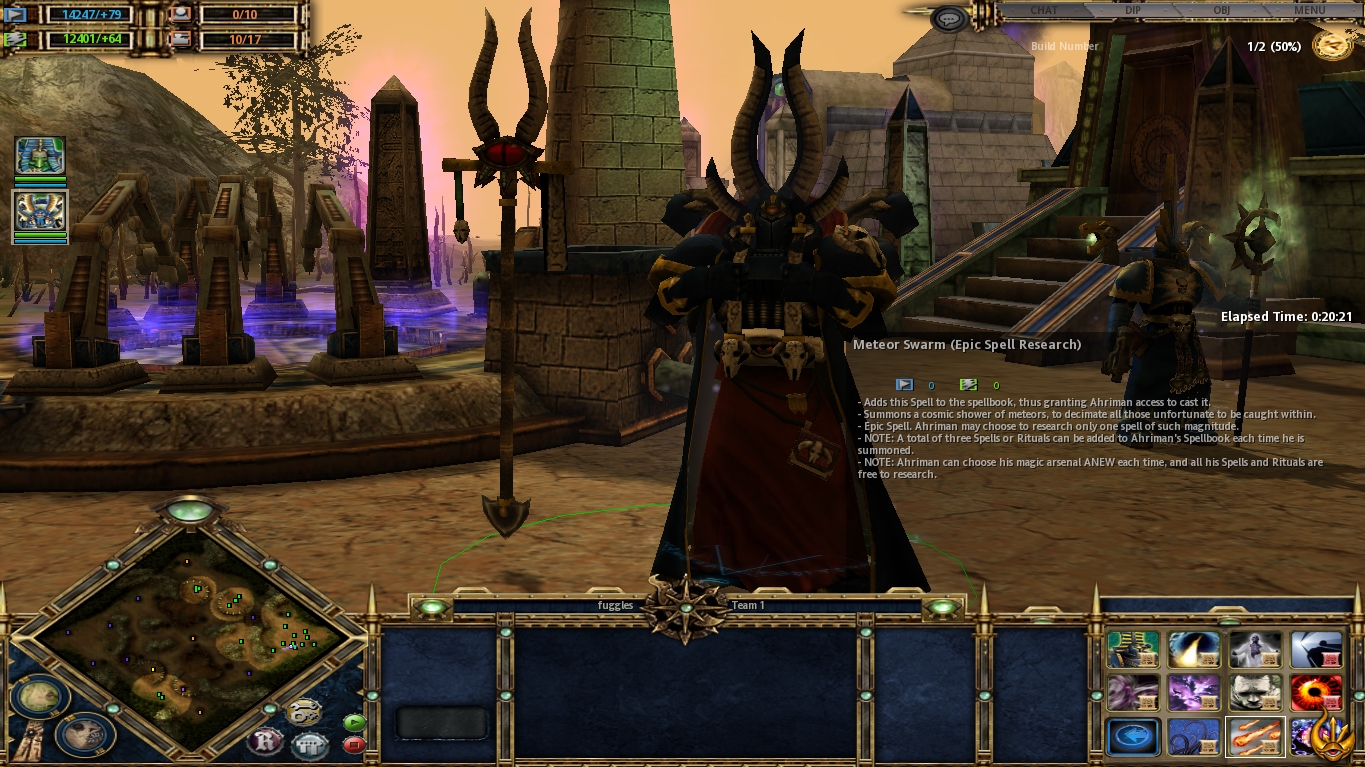 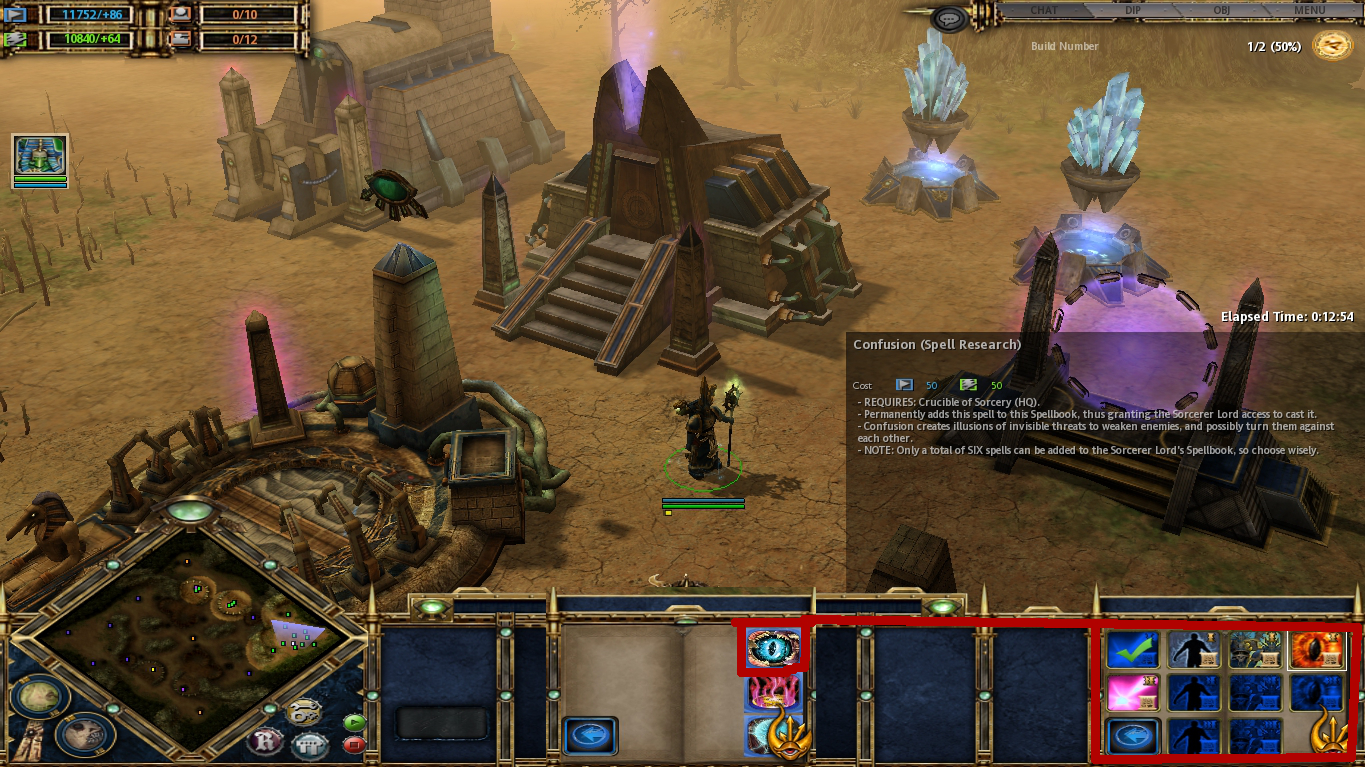 Feel free to contribute ideas, impressions and of course balance suggestions. Needless to say, if you find a bug or ANYTHING amiss, please, share!!! We plan on releasing a patch with some upcoming art assets and some more voices, but in the meantime, whatever you spot, we will fix too.
Now, if you can lend a helping 3D/OE hand, we would be able to perfect the faction, fixing all the missing/glitching art parts. Any art help is welcome, at this point.


Special Thanks
FoK team for use of some of their models and icons ONLY as placeholders until we can develop more on our own.
There are others from TS project's distant past like RoughRider and NRD8OY but unsure what their function was (likely 3d work).
And of course last but not least, brother Warsmith, for some model updates and especially for Thrall Wizard model updates.

To seamlessly combine Thousand Sons with other RACE mods, we strongly suggest you should use the Unification race combiner mod. It contains all the files necessary for the SCaR scripts, spottings, winconditions, Taskbar (UI) and and plethora of other features that ensure error-free gameplay.

You will also need the latest Objective Points Mod, Bugfix Mod and WarGear mod for Soulstorm. See in the Unification page for more. 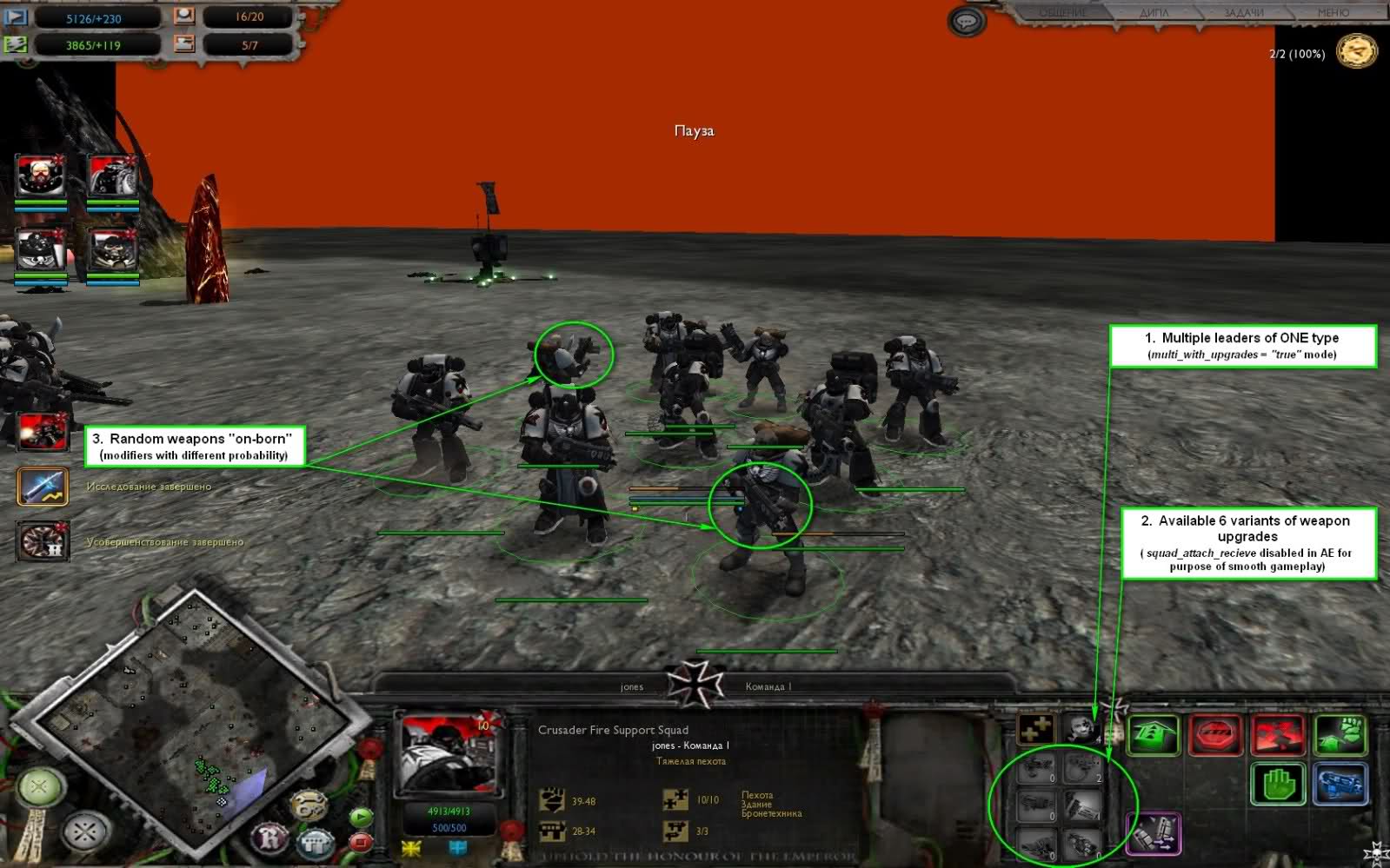 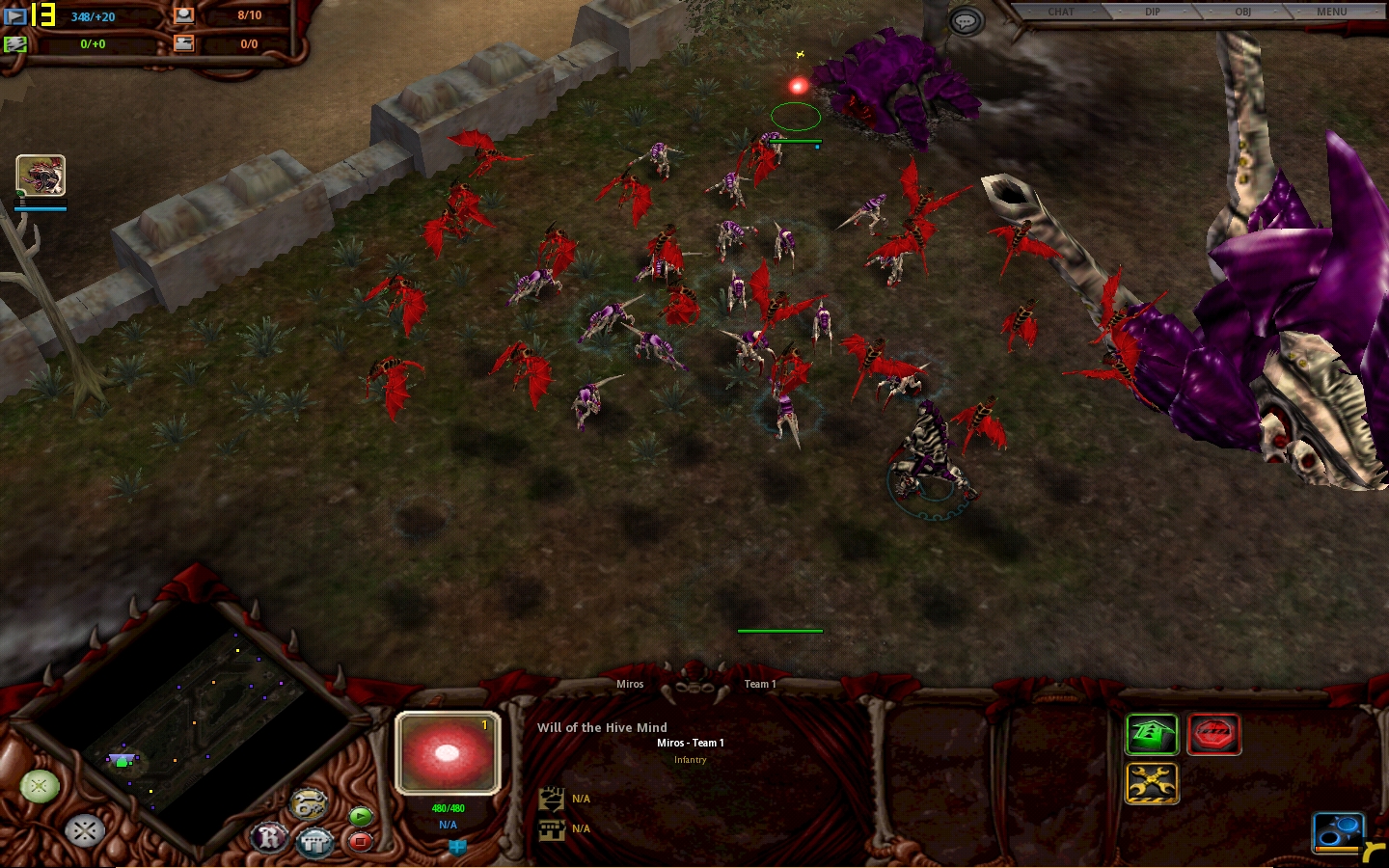 There are a number of Soulstorm race modifications available on Moddb, so I've put together a quick guide of the available ones, as well as the Unification...

The most known community map pack of the past decade, age of glory of DoW modding. Uploaded 17-11-2006 on DownOfWar.FileFront.com. Now saved on Moddb.

The FreeUI mod allows the creation and usage of custom taskbars for ALL player races. It is developed and coded by brother Miros, who made an excellent...

The supplementary Objective_Points mod version 2018.05.14 for DoW:Dark Crusade and DoW:Soulstorm. This mod is vital for running any other mod(s) with...

Hey, is Magnus ever gonna be added? I see him in the list of commanders and I would LOVE to see your take on (arguably) the strongest Primarch.

just a query, does this mod have problems with it? i cant seem to be able to upgrade squads to have more marines in the units

The mod uses an alternative UI, so you'll have to click a button where the power/teleport abilities usually are, that should change the UI to show a secondary set of buttons. If that doesn't work, check that you have all the required mods. Or install the full unification mod. It has an automatic install option.

Great mod, only issue I can see is the swap with unit commands and the box where unit reinforcement normal is. It's a small thing but it really throws you off seeing as its the only team that's switched like that that I've played.

The devs said on the UM (Unification) page that an updated version of TS will be released alongside the new UM version (ETA this month). In the new version there is supposed to be an option to give the TS a more standard UI. I'm not sure exactly what that entails, but it could be worth your while to keep tabs on this. I don't remember exactly, but I think (not 100% sure) that one or two new units are in the update as well, and a larger TS update is being planned for later :)

PS. If you haven't already, feel free to check out the upcoming UM version. The Mod manager and the win conditions make it highly modular.

Hello i like the mod but the UI throws me off is there a way to make it the basic UI? Because i really hate having to use that switch thing to go in between spells/reinforcement/guns

Ok, been playing the Thousand Sons mod, and I've been noticing some glaring issues that ruin the experience. One of the lesser ones is that several of the UI buttons are replaced with a purple square, such as the Create Building button for the Thrall Priests. Another one is that I'm unable to access things like, add squadmate, or add exotic weapon for units such as the Rubric Marines. I really want to like this mod, but just so many problems.

I've been really enjoying the Thousand Sons Mod, but I've had one glaring functional issue with it. None of the Sorcerer Lord's summoning spells will work for me - this includes summon lesser Daemon spawn, Clone, and the Daemon defense totem spell (forget what it's called). Basically any spell he has that produces a new model in the game... won't actually produce a new model. He will stand, cast the spell completely undisturbed, the spell will produce a puff of smoke, but then there won't be anything summoned. Is this an issue that users commonly experience? Is there a fix? I appreciate any feedback!

ps - In the main menu, when Thousand Sons are selected as the current army, the Sorcerer Lord doesn't show up in the menu; the game just defaults to the Battle Sister hero. Probably a separate issue, but perhaps they're related?

All these issues are related to the SCaR engine brother.
It seems you are "combining" Thousand Sons with other mods!
If so, there are changes that you must make in order to make it work properly.

If you experience this issue with TS playing STAND-ALONE, then please re-download the mod, as well as the latest FreeUI mod!
And re-install them (make a clean install).

I really want to ask and I will. Will there be an update to include more to this mod after recent editions granted more to the Thousand Sons such as more weapon options, more units, and more powers. Or could units that haven't been used but exist such as Spire Guards and silver towers be added. I'm just wondering about this.

I'd love to see this too. Even if it's just a few extra things. Adding in Soulreaper cannons to Rubric and Terminator squads. Tzaangor units would be a nice addition too. Maybe even add a branch tier. Choose either daemons, as it is currently, or go with Tzaangor instead.

OK, LATE reply, but YES!
We plan to add MUCH stuff - we already have, in fact!

But for the moment, we focus on Unification.
Thousand Sons (and other races) will come later :)

Can't wait! Well, yes I can. Don't want anything rushed. But I adore this mod and want to see how it'll grow. So I'll wait patiently. :)

Thousand points for Thousand Sons.
10 points for 10 years.
All is dust!
We serve Ahriman.
We serve Lord of Change, Time and Fate!
Rubric Marines, march, as our wicked intellect will guide you to victory!

Emperor's Children mod:For the Glory of Slaanesh! Dawn of War

Dawn Of Planets Dawn of War