The Reckoning : For M&B

Mega Link uploaded by me
Mega.co.nz

BLUE BUG
- If anyone's having a blue overlay over everything, turn off depth effects. Change antialiasing mode, this is easily fixed

RUNTIME ERROR BUG
- If you get a runtime error, try ticking load textures on demand on the warband configuration menu.

OTHER BUGS
Try playing around with depth effects and antialiasing modes, also you should be playing in directX9

Please remember this is alpha and contains many bugs. I dont want to wake up to 100 PM's complaining that something doesnt work, its an alpha so you should fully expect somethings to be unfinished. But many things do work, and it can be a whole lot of fun at times.

Tips (so READ THEM)
- If you start with no ammo, switch weapons with the mousewheel and your gun will reload (a small bug i am currently working)
- Aim to get your firearms skill up, so devote points to agility and weapons master. Ironflesh is as useful as always. Focus on these two skill early game.
- Take the start up quest as its different from native and introduces you to some of the new features. Also there is a big payout in it, if you get far enough. Also it can be pretty fun to do.
- Aiming with a weapons is useful, you can aim with either left shift key or Q.
- Infected animals are a hell of a lot more dangerous than they sound - beware!
- Shotguns (one of the starting weapons) are only really useful at close range, so try and get an alternative longer ranged weapon if you wish to use them. 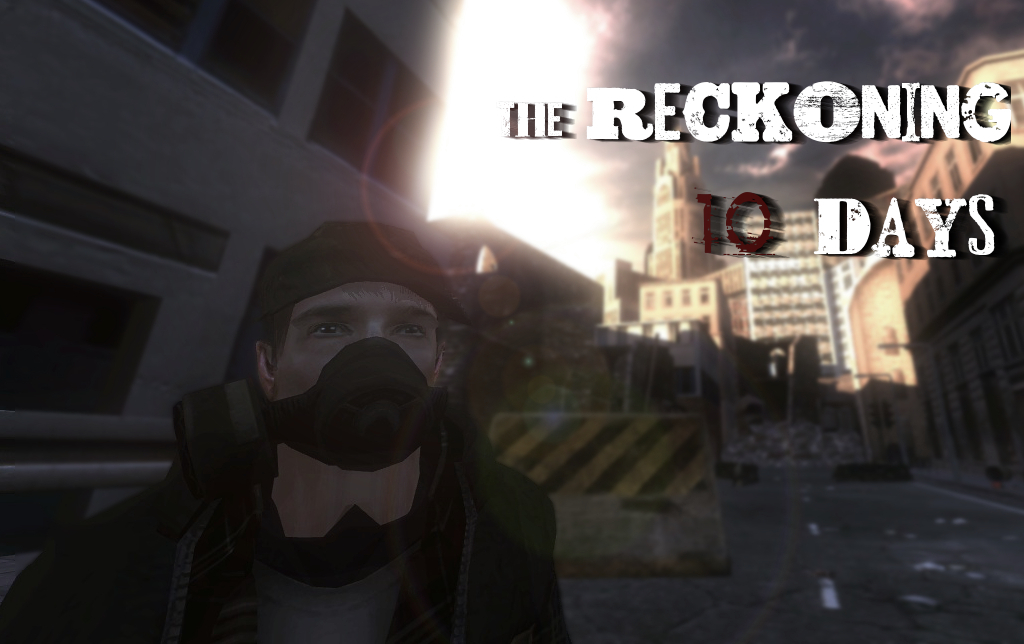 "The year is 2019, five years since a fatal virus wiped out much of the human population.
Anarchy has been set upon the world.
Packs of the infected roam the countryside and the cities.
The last remnants of mankind struggle to survive"


Main mod thread on taleworlds forums - Forums.taleworlds.com
their are many more pictures available in the above thread

THE RECKONING
The Reckoning is a single player mod for mount and blade warband. It is a complete conversion mod and taking place in a post apocalyptic world where a strain of virus has wiped out most of civilisation. Surviving in this world is tough, packs of the undead roam the streets and gangs rob and murder the weak. The mod is set in southern USA and features various factions, these factions goals range from merely surviving... to setting up an entirely new United States.

FEATURES
- Bands of the undead, loads of guns and all the other standard features you'd expect in an apocalyptic mod.
- No more villages!! Instead villages have been replaced with Points of Interest, these can range from a crashed plain to an abandoned farm. At Points of Interest players can scavenge for "resources". These resources can the be taken into town and exchanged for gold or troops.
- Drivable vehicles - certain vehicles (such as pickup trucks) can carry troops on the back who will aim and fire as you drive around
- A unique cover system never seen before in M&B, troops actively seek out places to take cover from enemy fire
- Much smaller, more intimate battles. Parties will not field 100+ troops as they do in native. Average faction partys will consist of between 20 - 40 men. Random battles will not be fought in bland muddy textured randomly generated "fields", they will be fought in custom made scenes - e.g a crossroads, an interstate highway, a forest, a gas station
- Players will have to make various decisions during the game and these decisions will affect they're gameplay. Think the karma/reputation system in fallout. An example of this in action is when the players have won a battle they have a choice of what to do with the dead - will you bury them (gain honour), leave them (neutral) or.... loot the bodies and then cut them all into little pieces

(gain reputation). This is completely separate from native's honour system. Ill explain this in more detail when the coding has advanced more.
- Sniping (actually zooming in) and many, many more features

Features present in the alpha include:
- a beautiful world map- many new scenes- many new armours and items,- many new factions and troops which are all complete and fully equipped- a new start up quest (which I quite like)- an ammo system, you have to continuously buy bullets if you wish to use guns- automatic weapons- a shoot and cover system (also used by ai troops)- ai vehicles- a new camera system- new recruiting system - some spoken dialogue thanks to voice acting by many members of the community - plants/trees wave in the wind

Features which are not done yet are new seige scenes, some castle scenes, balancing of troops and many others. Please remember this will be an alpha and hence will contain many bugs

Reupload of the Module System of the mod "The Reckoning"

Fixes missing horse normalmap that causes an RGL error. To install, simply unarchive it, copy and paste into The Reckoning's resources folder (Location...

The Reckoning : For M&B

The year is 2019, five years since a fatal virus wiped out much of the human population. Anarchy has been set upon the world. Packs of the infected roam...

Well done my friend!!
I had quite a laugh, with the cows and deers.

Remember this mod brought so much hype? It was the talk of the page, all of that and it ended dissapointing...

I was excited to play, but the bump map error ended the fun ... LOL Don't waste your time, modd is dead, guys.

Look up The Reckoning Third Stage Mod for a more up to date version.

I have a lot of errors,i cant play,can someone help?

Dear Devs, Google shows this page as a default for Reckoning. But there is an another, more completed variant, would you mind to change mod description.

the mod crash at start

You jinxed us all

This one is much more complete and I’ve writren two guides for it.

My son is useless, he eat my food, take salary, never fight in any battle and when i ask him something he says "surrender or die" .... best parenthood simulator ever 10/10

Single & Multiplayer
Tags
Embed Buttons
Link to The Reckoning : For M&B by selecting a button and using the embed code provided more...