The Empires of God

Scope of The Mod
In a lot of forum threads there are a lot of talks about the fact that being an Emperor is not simply be more that a King and that that more flavor should be added. In particular in the Christian world be an Emperor gave to you a sort of sacral aura, the coronation of the Holy Roman Emperor was similar to the creation by the Pope of a Cardinal. It is for this that the Emperor had, in the middle ages these prerogatives:

Regarding the third point this do not implicate that this mod will remove ahistorical Empires because for the developer(s) point of view, they, indeed existed at least the ones in Western Europe: they are, indeed, the remnant of the Roman Prefectures but a Christian ruler will call himself simply King not Emperor for respect of the Holy Roman Emperor; in any case creating one of the so called Prefecturial Empires give access to one interesting possibilities: try to convince the Pope that you are the real Roman Emperor and get the Imperial crown for yourself, doing this will upset the false Emperor that will declare war on you.

In the Orthodox world similar situations with the Byzantine Emperor and the pretender Empires of Bulgaria and Serbia could be tough.

Outer the Christian world we have similar situations any Muslim Emperor tried to become a Caliph and only after this is Emperorship become factual, a Persian Zoroastrian Emperor was a semi God, in China and Japan they were practically the Head of the Church.

A Tier above Emperor
For this mod a concept of tier above Emperor is present some Empires are so bigger that could be logically divided in two or more Empires and for sure had Emperors as vassals.
This is for example the situation when the Roman Empire was divided in Prefectures, the Prefectures was not Emperors but commanded the same respect and, indeed, with the Tetrarchy they became effectively Emperors, but one of this Emperors held all the others as his vassals.
Successively the Roman Empire was divided in two parts: Western Roman Empire and Eastern Roman Empire but the Eastern Roman Emperor held Seniority on the other.
The Emperor of China considered himself a divine figure and so had no problem to vassalize Kaghan of Mongols, The “Emperor” of Korea and The Emperor of Japan, but in this case it would be more correct to talk of tributary States.
In more modern period the Kings (Emperors) of Spain and England / Britain vassallized tribal Empires without problems.

As (for now) Crusader King II does not permit to add tiers this is accomplished inverting in some sense the concept that is a Roman Emperor is an Emperor while and independent Emperor of Hispania is called High King Hispania (if Christian is only King) but if vassal of the Emperor is a Praetorian Prefect of normal King rank (that is you get a giant Kingdom of Spain in the map without Castile, Galicia and so on...). 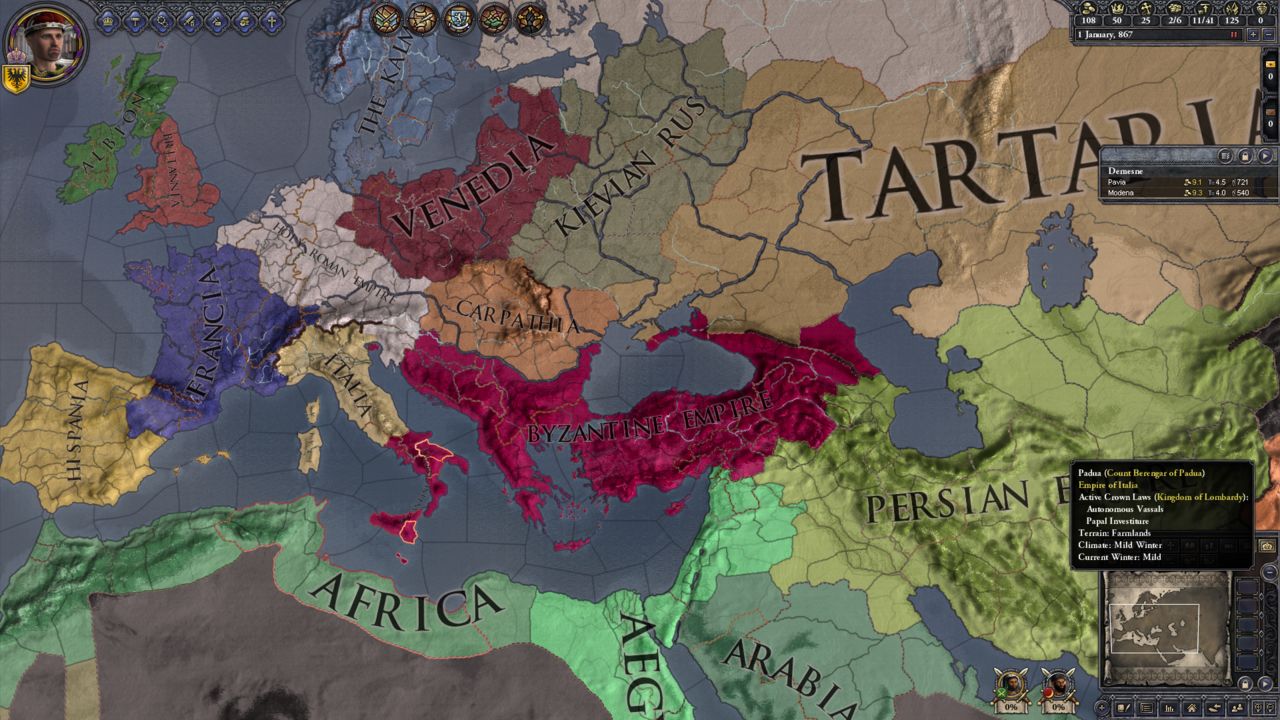 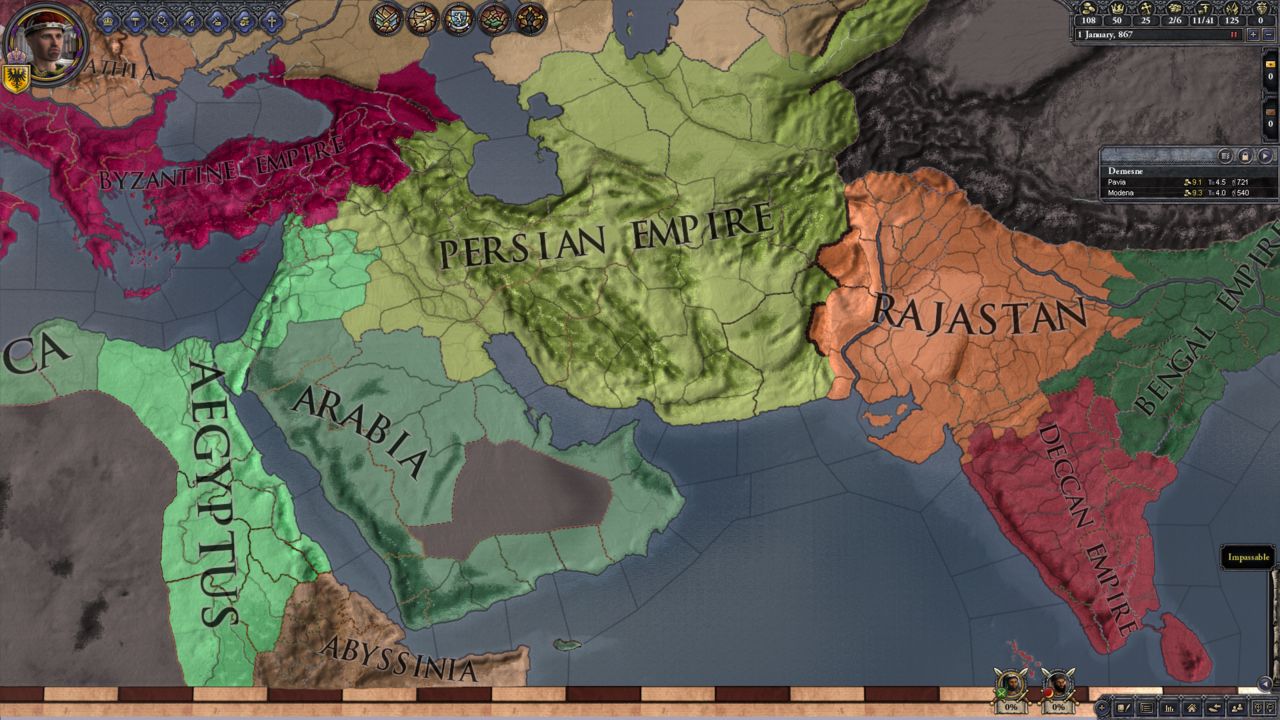 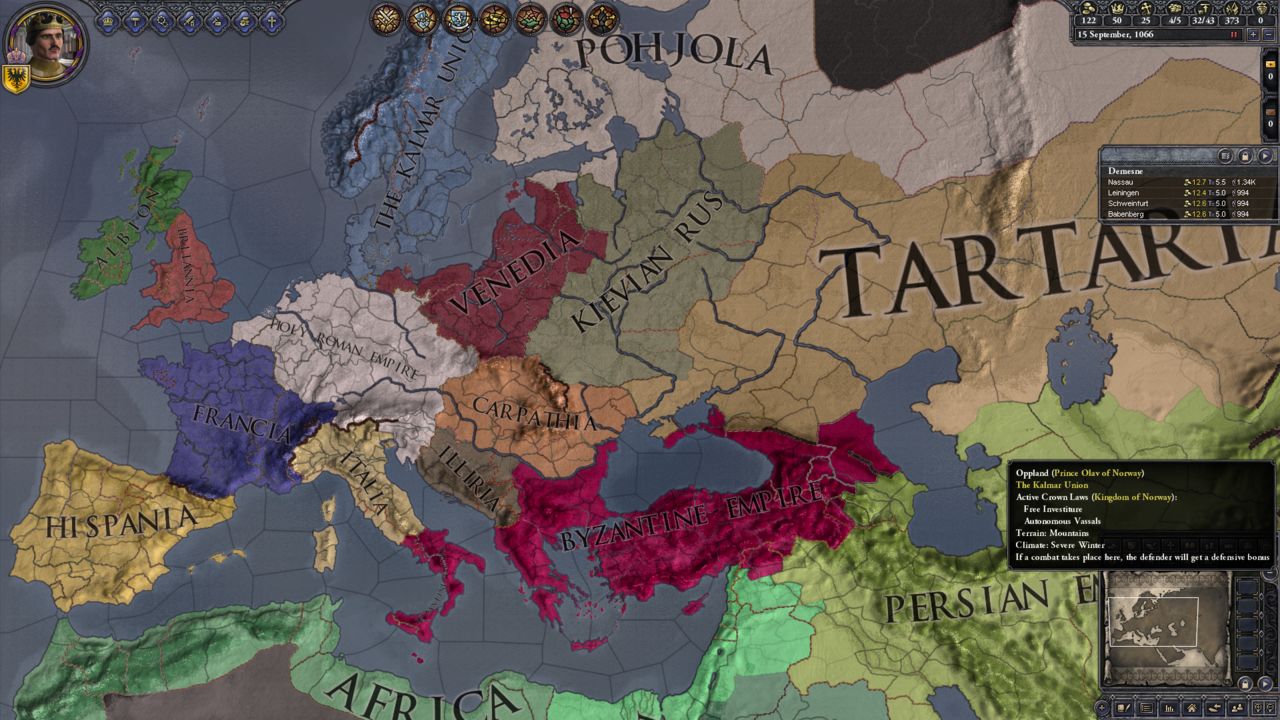 Translatio Imperium and Pretenders
The people of the Middle Ages had the conception that, in reality, the Western and Eastern Roman Empire had never ended but simply continued with some period of interregnum. Charles the Great was considered a Roman Emperor in all effects in par with Julius Caesar, Augustus, Trajan, Nero and so on.
In the East the Greek Empire of Byzantium held the same claim but in reality more time passed and it become more and more Hellenized until it lose totally it Roman heritage.
We, as powerful men of the future, known that, in reality, these two states were not the real thing but only
the rightful successor states of the Roman Empire and so in the mod are the ones entitled with the possibility to reform it.
As already said other Empires could exists and some are entitled with the possibility to be Pretenders to be Successor of The Roman Empire:

1. S.P.Q.R. special Empire that can be created by "The Commune of Rome" after the conquest of all the Italian Peninsula if you have played the mod called "The Commune of Rome" in it was called Western Roman Empire but I have reevaluated this as an exaggeration
2. (High) Kingdom of Germania, ex Holy Roman Empire after being defeated by S.P.Q.R.
3. (High) Kingdom of Italia, ex S.P.Q.R. after being defeated by (High) Kingdom of Germania (that will be H.R.E. again)
3. Tzardom of Bulgaria and Romània
4. Tzardom of Serbia and Romània
5. Tzardom of Russia
6. Empire of Trebizond
7. Latin Empire (or if you prefer "Empire of Romània")
8. Empire of Nicaea

the pretender will have a special casus belli against the rightful successor state and when used it could trigger a sort of "great war" that could involve other important rulers that could pick a side or another. In the end of the war a conference of Peace will be held by the victor to redrawn the new face of Europe.

Reforming the Roman Empire is no more simply as collect disparate territories but you need before to held the titles of Western and Eastern Roman Emperor and to obtain these titles will be not easy.

This is the change log:
- Restored RIRSEI event to create the Ottoman Empire
- Added decision to restore Byzantium
- Added decision to become a "new" Byzantium for Latin Empire, Serbia,
Bulgaria and Russia
- Removed event file CA.txt because events triggerd randomly
- The events Successor / Pretender of ERE / WRE should trigger only a
time for character life not any days!
- Event chain to give to the restored Byzantine Empire the Echumenical
Patriarcate and Varangardian Guard as his vassal
- Added custom regions of world_byzantium and world_megas_hellas

Finally the Fourth Alpha Release I have worked for all the Summer Vacation is ready!

Second Developer Diary: A look at the East

The Second developer diary of "The Empire of God" has been released.

- The Roman Empire has its COA again and the law of the forming title are maintened - Modified the Latin Empire scenario now it starts in 1204/8/1 with...

- Compatible with "The Horse Lord DLC" and accompagning patches - RIRSEI events ID were no more OK because were > 99'999 changed them all! - Fixed RIRSEI...

The previous version had the wrong .mod file, sorry for the inconvenience.

- The Eastern Roman Empire after being formed obtains an Event in which is declared "Pretender Successor State of W.R.E" after this it gets access to...

This is the first alpha version of the Empires of God.

hi @fanol i have a project mod for ckii, and i need your help for that :D can you send me a missive, ty

Can you remove the Feudal Opinion against Viceroyalties in the Byzantine Empire somehow? It makes very little sense as it is, I'm getting -50 opinions with some of my vassals.

I need your help populating history of "The Commune of Rome" families:

It is a real good mod, I hope that will be updated with more stuff and decisions ^^

Be sure of that! I'm working now to add the Italian Communes this means that "The Commune of Rome" will have a real Senate, proper Elections and a way to transition from a "Senatorial Republic" to a Principate and, in the end, an Autocratic Empire... rewriting history.
But he will have the Commune of Florence, Milan, Siena and so on...

There is a de jure set up change in Asia and in Scandinavia in project.
I cannot anticipate yet a new release date.

I keep having this "Et tu, Brute?" event popping up.

It was a nice surprise at first, but it already killed 6 Emperors and it's getting a bit old.
One would think the Senate would take a break once in a while.

I tried changing it, but I can't find it in the event files,
could you please tell me where to find it?

PS: What exactly causes it? I've had Just, Kind, Charitable and all-round popular rulers killed for being tyrants.

It old "The Commune of Rome" stuff it should happen if you tries to elevate crown authority, it tries to simulate the assassination of Caesar when he tried to do this in the real Roman Republic.

As I want to create a proper "Senatorial Republic" with a true Senate it is better to remove it for now... I suspect it is bugged too!

Never mind, found it.
It's the "CA" file in the /mod/empires of god/events.
Just delete the whole thing or play around with the factors if you run into the same problem as me.

Single Player
Tags
Embed Buttons
Link to The Empires of God by selecting a button and using the embed code provided more...