A small article about Great House Sadras and some other news about 2.0.

Posted by DaedraWarrior on Oct 1st, 2019

The Great House Sadras is the youngest political power on the council of the Great Houses of Morrowind. Selected from among many other small Houses, as the most convenient puppet for Redoran, Sadras already by the end of the first century of the Fourth Era showed that he was not going to put up with the role, that other Houses provided for it. 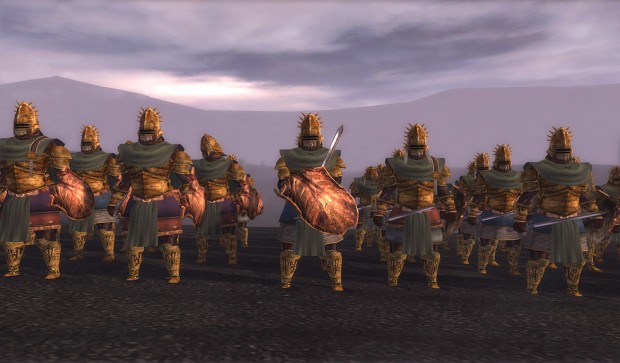 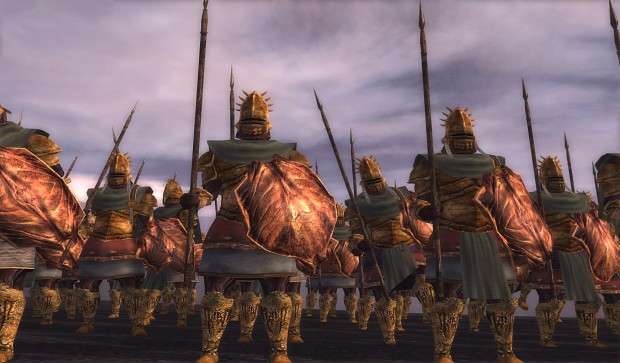 Having settled in Narsis, on the ruins of the Great House of Hlaalu, the members of the Sadras family took a convenient position: under the pretext of restoring the plundered lands and helping the fugitive aristocrats who suffered from the consequences of the Red Year, the Great House began to pull down under their banners the fledgling nobles and merchants from among Hlaalu who did not tarnish close relations with the Dren family, while not forgetting to participate in the liberation campaigns of the House Redoran against the Argonian invaders. Thus, the Sadras family has earned itself a reputation as a “neutral” force, which is interested in the restoration of Morrowind, and not in the political and religious wars in which old Houses are bogged down. Due to this, those Dunmer who shied away from relations with Redoran, Dres, Telvanni or Indoril soon began to join the Great House. The voice of House Sadras gained weight in the Council, and with it the opportunity to act without the permission of others. 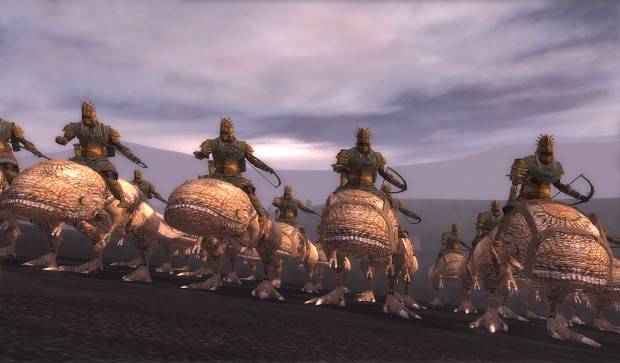 Now the Great House is ruled by Archmagister Vilinu Sadras. Like his predecessor, he seeks to strengthen the power of his family and, perhaps, once to move Redoran from the podium of the rulers of Morrowind. Despite this, Archmagister conducts a neat policy, trying not to cross the road to other Great Houses, because Sadras directly borders Black Marsh, from where the Argonian armies can come at any time.

The troops of House Sadras are similar to the armies of the other Houses, although they have several significant differences. Like other Dunmer, Sadras rely mainly on bone-armored infantry and cannot boast of strong cavalry. Among the features of their army, Sadras Agents - units of archers and magicians, not very powerful in range, but capable of giving the enemy a worthy fight in close combat, as well as the Guardians of Narsis - heavy spearmen in crimson armor and the Avengers - elite warriors with katanas, can be distinguished. In general, the army of the house of Sadras can be compared with the armies of Indoril and Redoran, although their soldiers lack the discipline and experience. 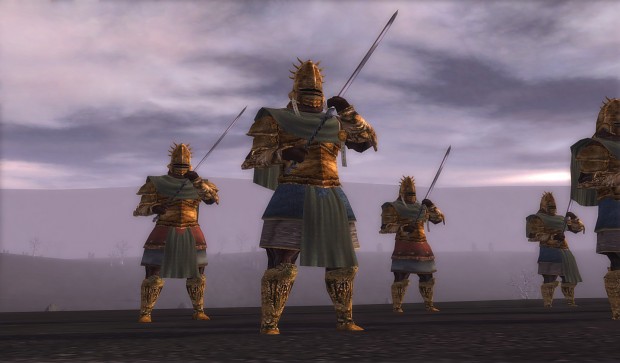 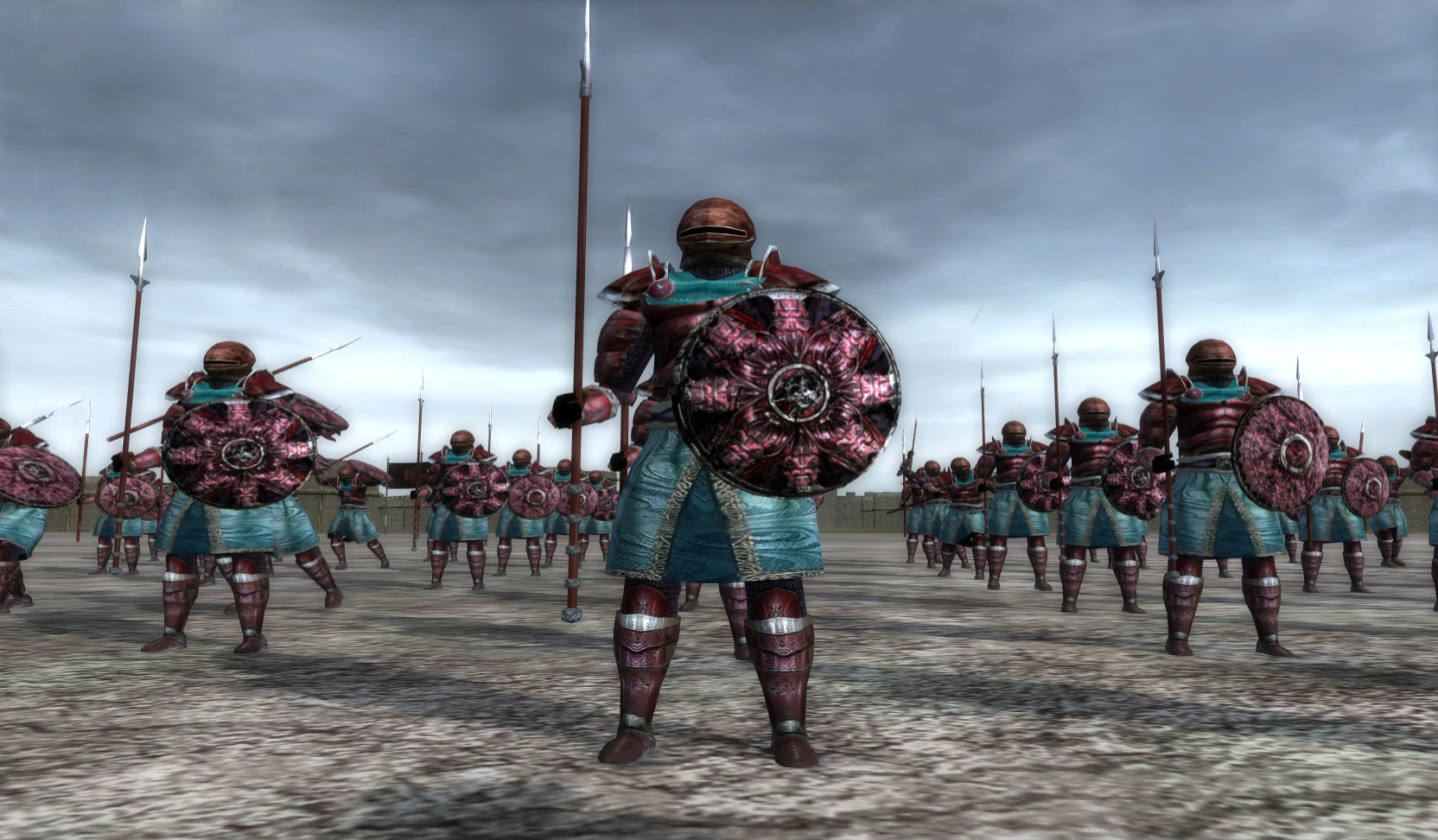 As you can see, in the trailer, the Sadras soldiers fought the Argonians, and the Black Marsh army this time looked a bit different. The fact is that we have recently been collaborating with Beyond Skyrim team, a huge community of mod makers recreating Tamriel’s lands on the TES V Skyrim engine, and the guys from the Beyond Skyrim: Black Marsh team, led by Rubaedo , advised us to make several corrections related to the Argonians.

First, we redesigned the militia. Argonian militias and ambush masters are now more similar in spirit to the rest of the faction units and wear more “aztec” clothes instead of typical Morrowind costumes, as well as new spears and Argonian shields from TES Online (haters gonna hate). This redesign will also affect their stats for a bit. 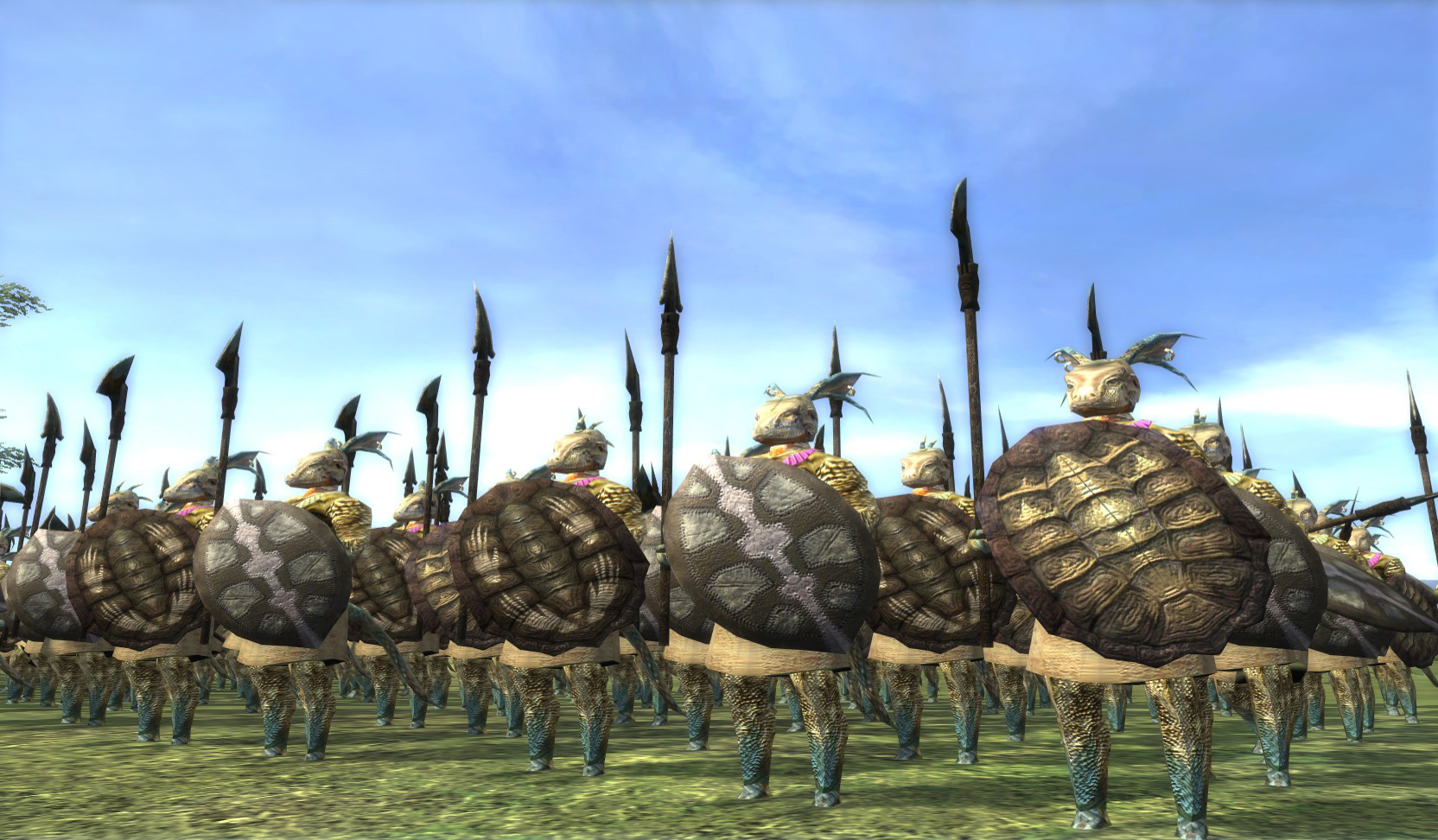 Secondly, we drastically changed their former military elite - the Elite Clan Warriors received a small visual redesign in terms of helmets and changed their profession from halberdists to two-handed. As a weapon, they now carry maquahuitl, and their name is “Igatla”. As Rubaedo team prompted us, this is the name of the Saxheel, who are members of the closest circle of the Argonian leaders - advisors, loyal warriors and bodyguards. 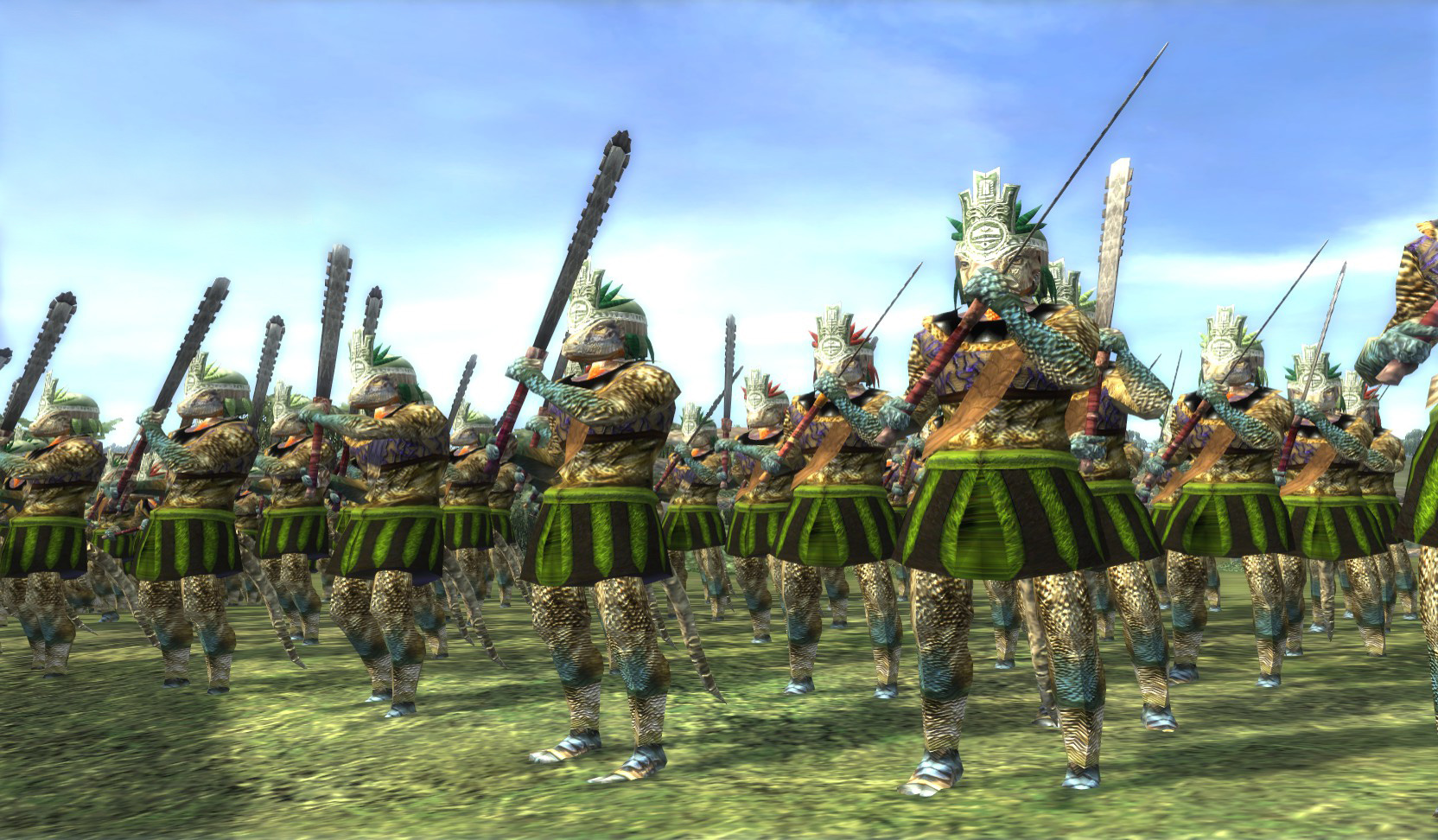 Thirdly, we have changed Hist Priests. Although the unit has not undergone any changes in terms of combat use, it changed its name to "Treeminders”, which is more consistent with lore. Their appearance will also undergo some changes, but we will show them a bit later.

All of these changes will affect both campaigns. In addition, as we have already said, in the Fourth Era, the Argonians will receive two new units in return for the disbanded Order of Shadowscales.

The Argonian redesign is not the only result of our collaboration with Beyond Skyrim team. The guys are doing really cool work to recreate Tamriel at the end of the Fourth Era, and in our mod you can see a small teaser of their work, because many lords and generals in the new campaign will be based on the information they provide.

I kinda disliked Sadras since I learned they replaced my favourite house, but after reading this they might be up there with Hlaalu :P

I'm glad you guys made most of an update article and a trailer about Sadras! I've been curious and excited how you'd approach Sadras, since we have literally never seen their architecture, culture or soldiers. You had to design a faction around some Legends card designs and a mere few sentences about them in Skyrim.

As for the Beyond Skyrim collab, I did not see that coming, but it's cool especially in the fact that it's now basically fused to actual official lore, if you're basing some units and names off it.

Similarly in place of actual BGS lore, use all the Elder Scrolls Online ideas, designs and models you need, I say. It's the only fully 3D TES game with all provinces, so if you need it for inspiration... Well every time it's been done so far it's looked good and fitted with the art style.

Long comment for a long article, just wanted to give some positive thoughts.

It doesnt fit the art style at all actually.

Some assets (mostly from DLC) do fit, some not. Five main games actually doesn't fit each others art style.
But sometimes it is not smart to scold ESO style, because MMO genre has it's own restrictions and also parts of different armor sets should fit others to avoid clipping. But I'd say ZeniMax Online do it better than other MMORPG teams and, at least improve they skills with each new DLC.
I agree that ESO isn't best TES, at least for me, in it's visual style. Personally, where is no TES game, which visual style I would like 100%. For example, I like Daedric armor from Oblivion and Morrowind, but hate Skyrim's. I like how elves look in ESO, but hate their appearance in other games, and there are much more examples. ESO isn't worst TES, at least until Blades and Battlespire exists. And I can tell in which part it is better than Skyrim and Morrowind, but I told it long ago

You always talk like i said ESO is bad game. Thats funny cuz i never said its bad game, just that its lore is kinda bad and shouldnt be taken seriously at all.(+that its 2E artstyle doesnt fit 3E stuff)

OK, I understood your position on ESO as game, but I don't fully agree on artstyle, because:
3E has also at least 2 different artstyles, which both don't very good fit with each other and with 4E artstyle. 4E artstyle also can't be explained as "technological improvement", because it not looks like it (example - Imperial armor).
ESO Lore... Well, it is controversial too. Skyrim and Oblivion also oversimplified and edited some established Morrowind lore, like Imperial Legion ranks, Nordic culture, Cyrodiil's climate etc. But these two added some very good stuff and lore depth too.
First thing I totally agree - ESO's main game lore and main quest is 90% oversimplified ****. I still can't handle this warcraft alliance-horde style with Three Banners War and I hope that this part was erased by Warp in the West. On other hand we have DLC, where situation is opposite - 80%-90% of their Lore is fine or great. It expanded argonian, dunmer, redguard, altmer, orsimer and khajiit Lore, and some of these had little to no info before ESO. And, as I said, these additions weren't bad mostly.
And last few words about artstyle - ESO isn't first TES with huge simplifications in it's visuals (I think it is disaster of all post-morrowind games) and on the good side - thanks to ESO we already have at least some info about visuals for all tamrielic cultures (+little bit for maormer, yokudan and tsaesci) which hadn't been covered by main games for now

I play with Skyrim faction and now the Oblivion Crisis has started and the Empire is imidiately destroyed and becomes rebel, how to fix this bug?

Interesting ;) I made this mod several years ago and it appears to fit with your story lol.