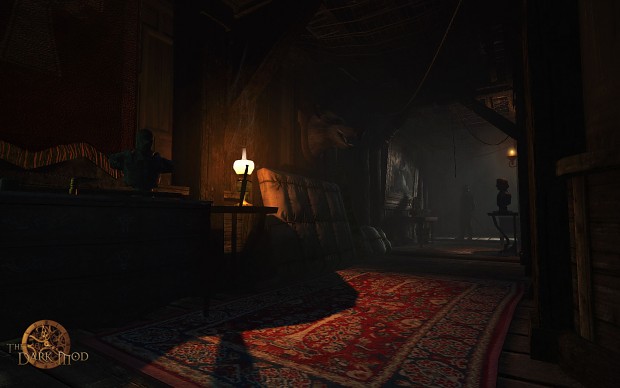 After a lengthy public beta phase,

we are proud to announce the release of

The Dark Mod has undergone a lot of reorganization under the hood.

A substantial amount of work was done to improve rendering performance and overall framework tech.

Legacy OpenGL methods have been replaced with their

This is also the first TDM release to offer a native

Duzenko and Stgatilov have implemented a Soft Shadows option that finally removes the sharp edges of TDM shadows. This has a huge impact on the visuals of TDM missions. This option is currently labelled “Experimental” in the menu as we have had reports of issues on certain hardware. See here if you are experiencing flickering or other problems. 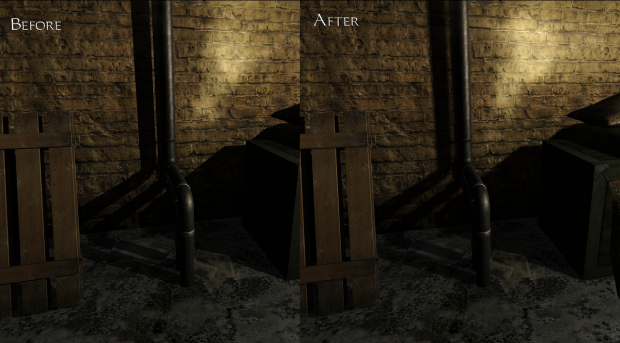 You may now have Post-Process and Softshadows enabled with it set for a cartoon-style render. Or simply use it to degrade visuals in exchange for VRAM without losing Post-Processing: 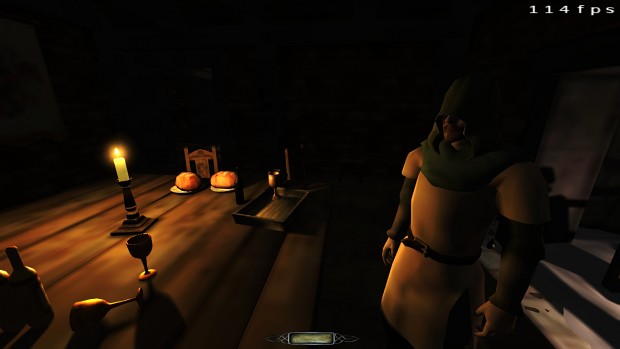 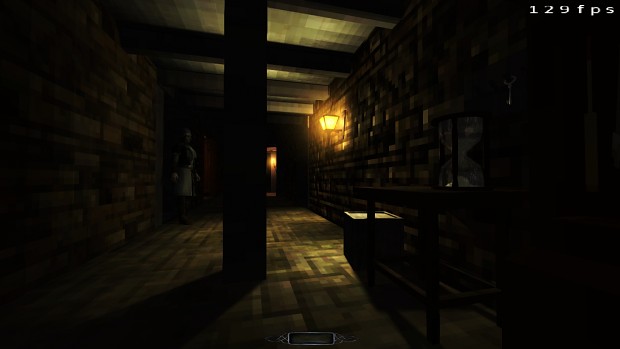 EFX audio now allows users without Creative hardware to enable EAX in the menu—a feature that processes reverb data and changes sounds based on the surrounding environment. Currently, only a few maps, like Volta 2: Cauldron of the Gods, by Kingsal, are set up to use EAX effects, but since all users can now benefit from it, mappers are encouraged to use this feature going forward. Interested mappers should see here.

The TDM menus have also been given a visual update, boosting the resolution and adjusting the graphics for widescreen monitors. Durandall has added scrollbar functionality to the mission menus, and Obsttorte has implemented a new menu option that allows users to customize the size and opacity of HUD elements, complete with a visual preview.

A new set of Springheel’s architectural modules is included in this release–a set of 50 models for creating church interiors. A number of new models have been added to other sets. Also included is a huge number of new prefabs, allowing mappers to quickly and easily create detailed map sections, as demonstrated in Springheel’s Speedbuild series. 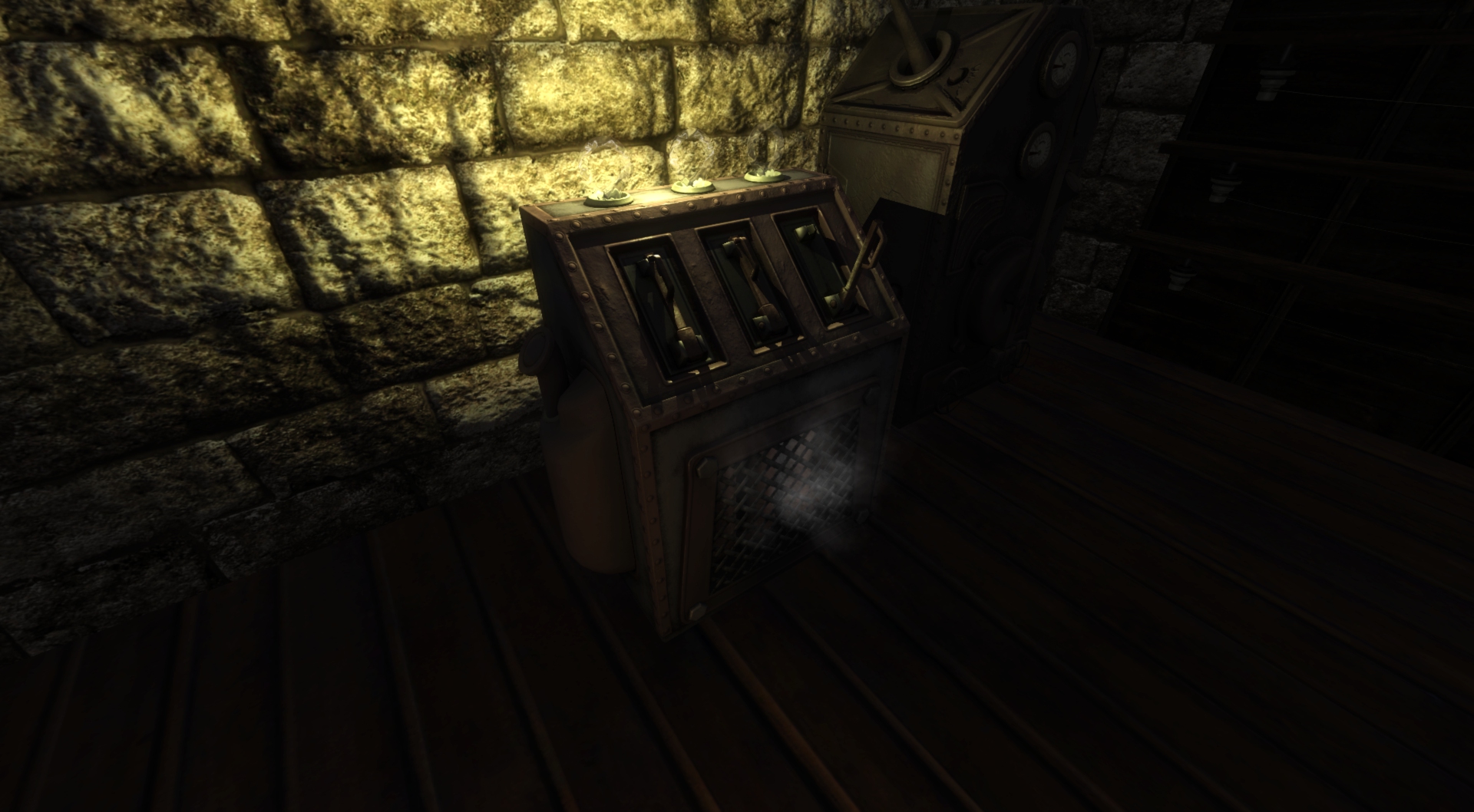 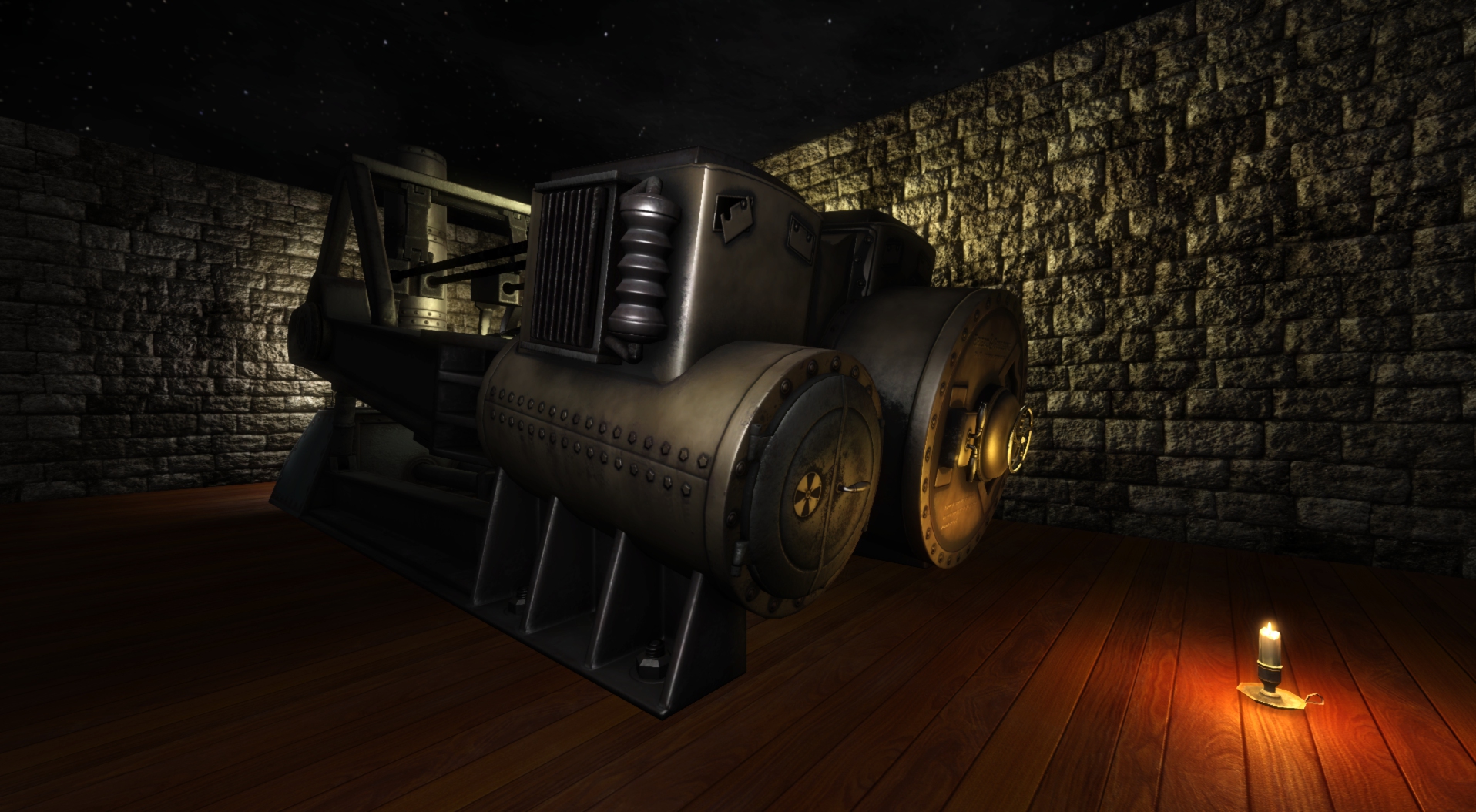 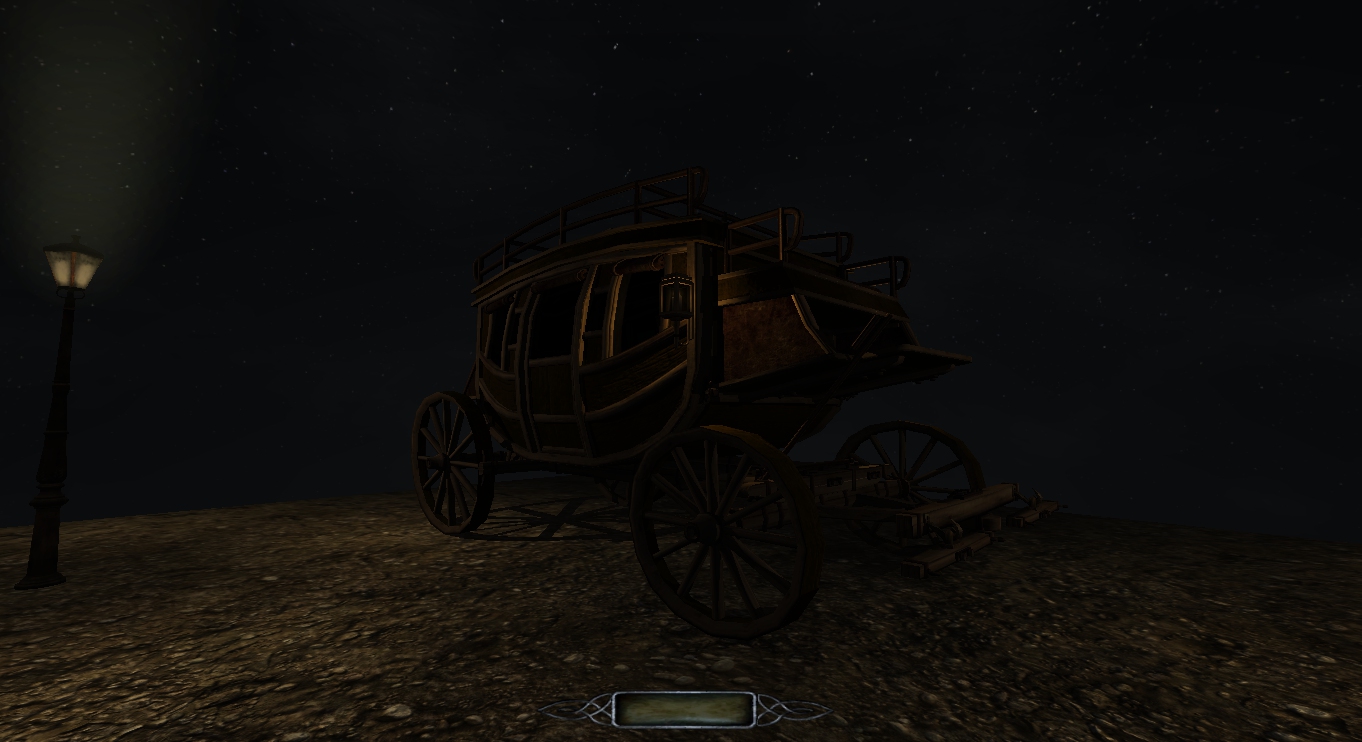 Rich_is_Bored improved our lampshade (cubicLight) material. You can see it in action with the lamp_desk_cubic entity: 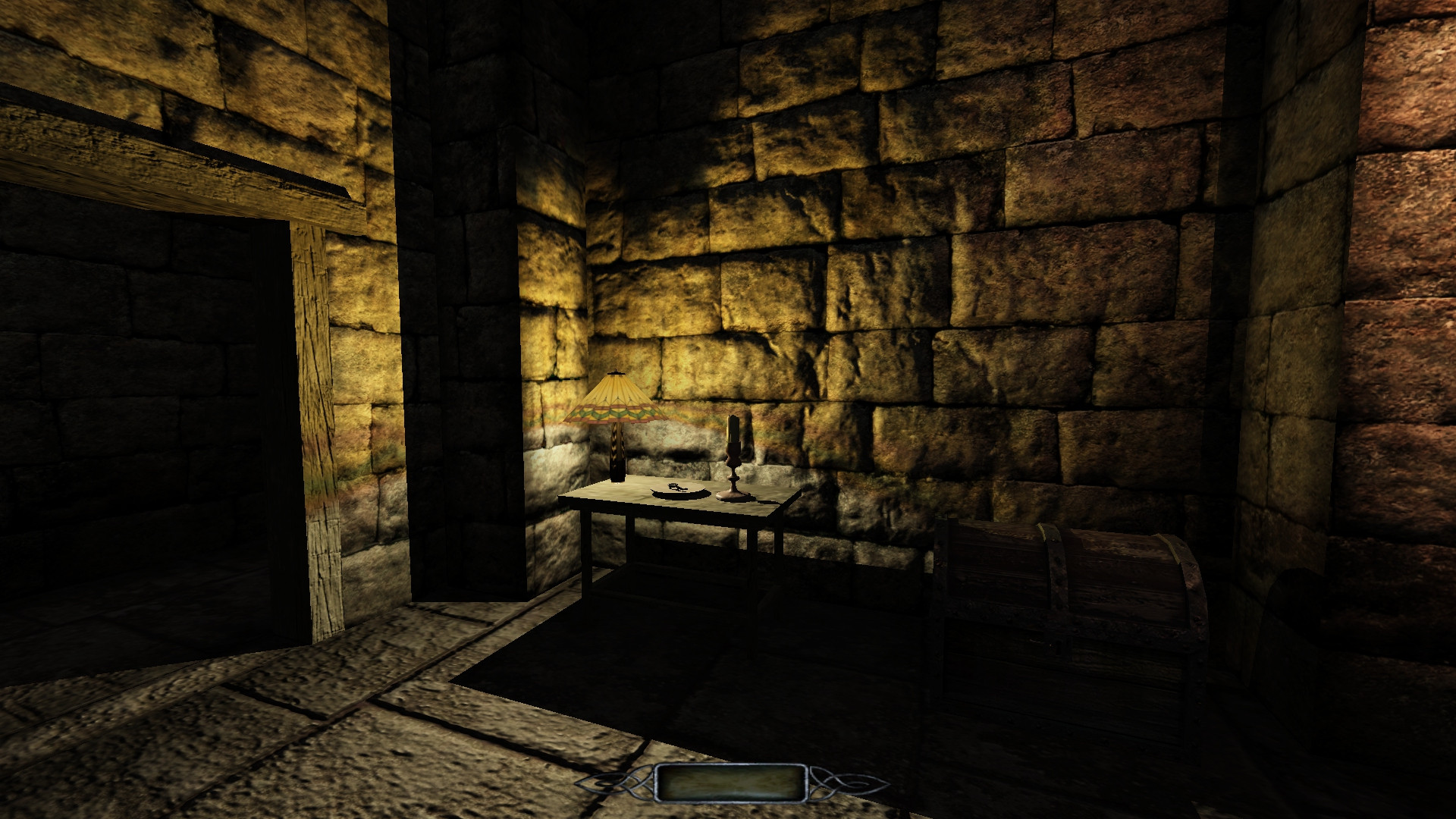 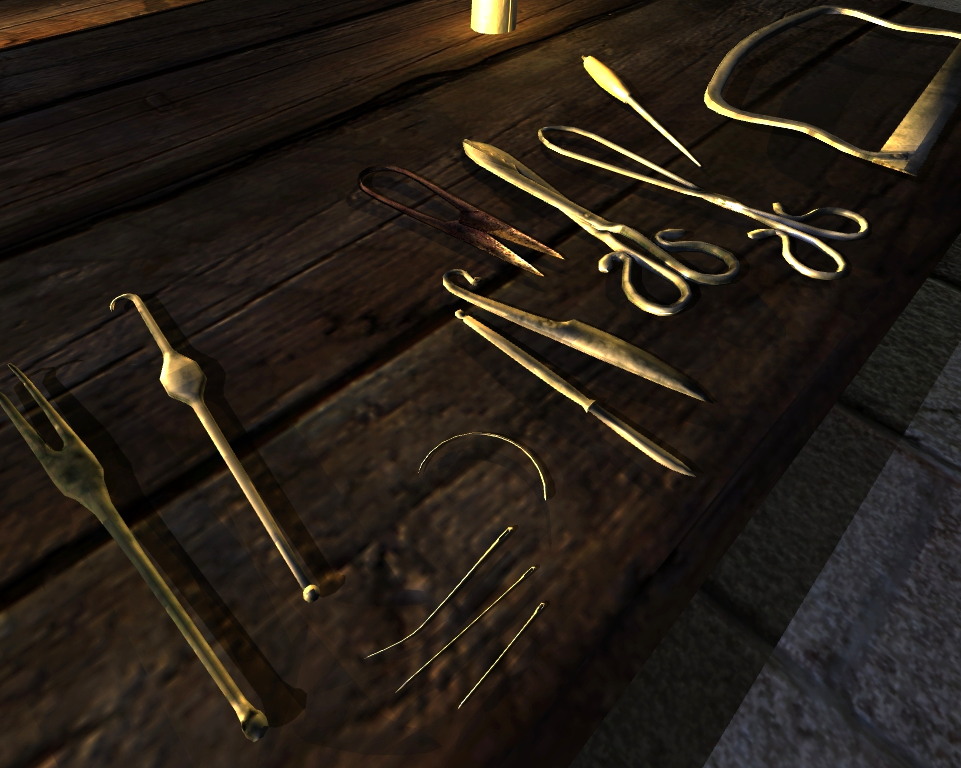 Also, Arcturus has fixed the Horse Animation and made an animation for AI sleeping in chairs:

This is the first TDM release to offer video codec support other than ROQ. TDM 2.06 allows for FFMPEG video support, which means that mappers will now have an easier time adding video briefings to their missions.

An error that kept food from restoring health has been fixed, and all food will now restore a certain amount of health when eaten. Guards can now sleep and wake up while seated.

Also, you can now setup a key bind for toggling creep.

To use you must define a toggle in Darkmod.cfg

replace with whatever key you wish.

If you want to use CTRL, you will need to remove:

Finally, experimental multi-core support is included for the first time, via patches from Cabalistic’s VR branch. While this can cause performance enhancements, it is currently in “Experimental” form as some users may experience random crashes with this option enabled. Uncapped FPS is also now an option for users after this update.

To update, simply run the tdm_update.exe file in your darkmod folder. Please be aware that old saved games will not be compatible with 2.06, so finish any missions you might be in the middle of first!

Sotha: The Bakery Job (A "Let's Map" together project): 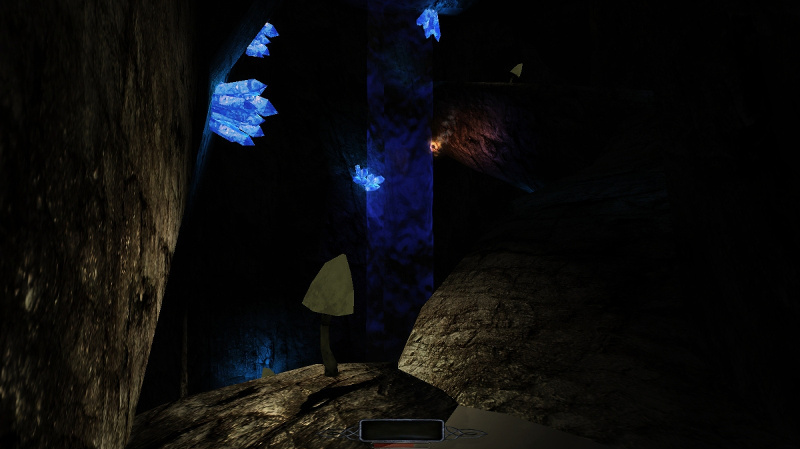 Springheel: A Matter of Hours: 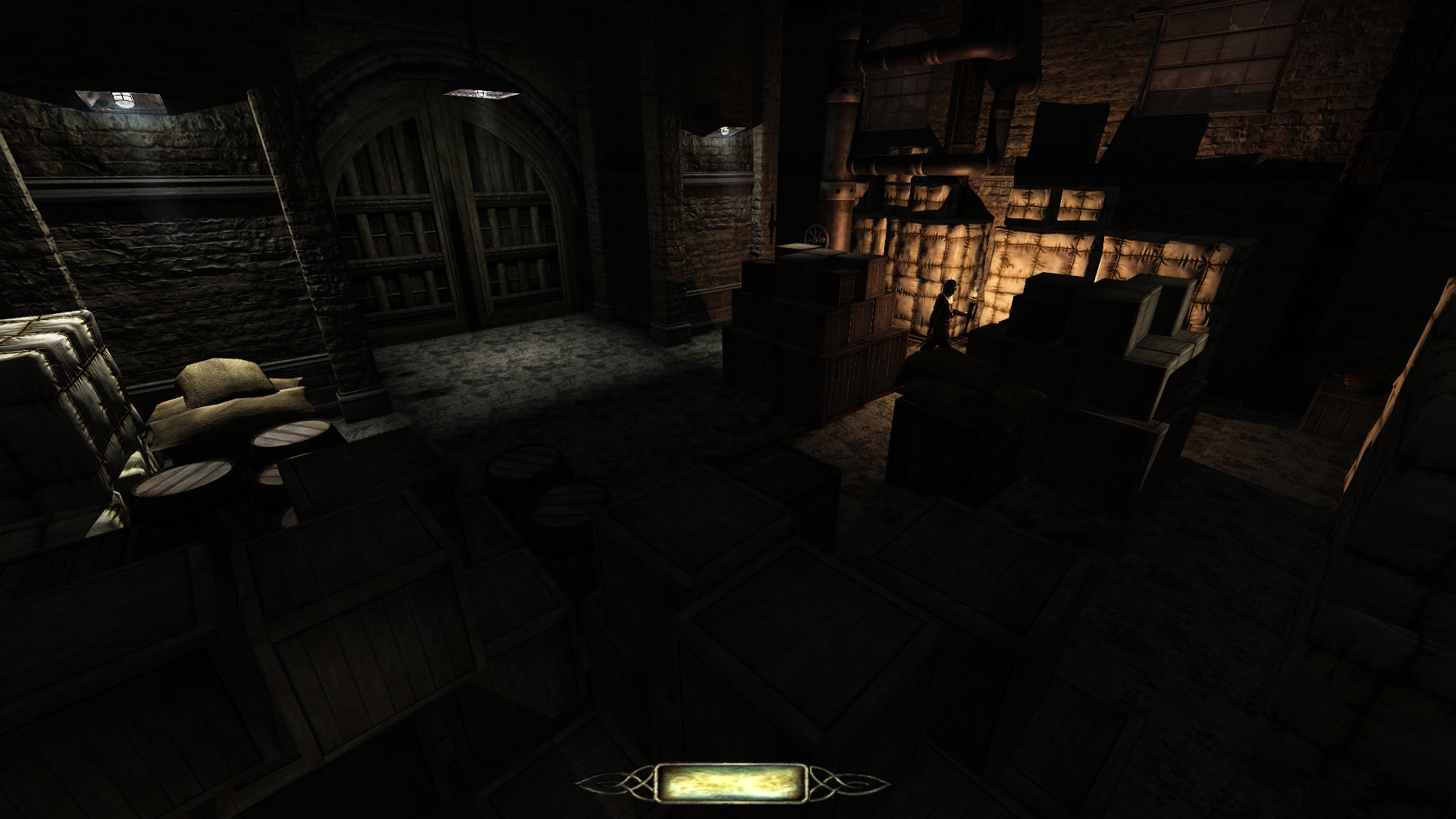 Spoonman: King of the Mountain: 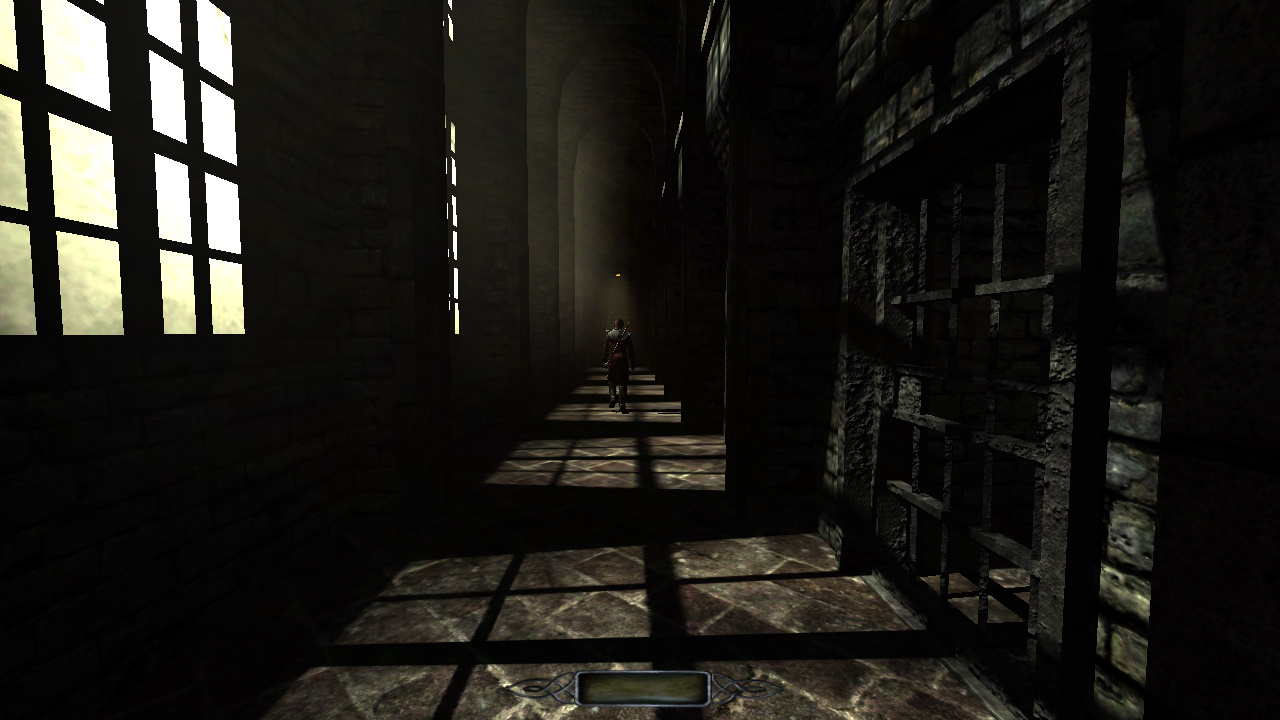 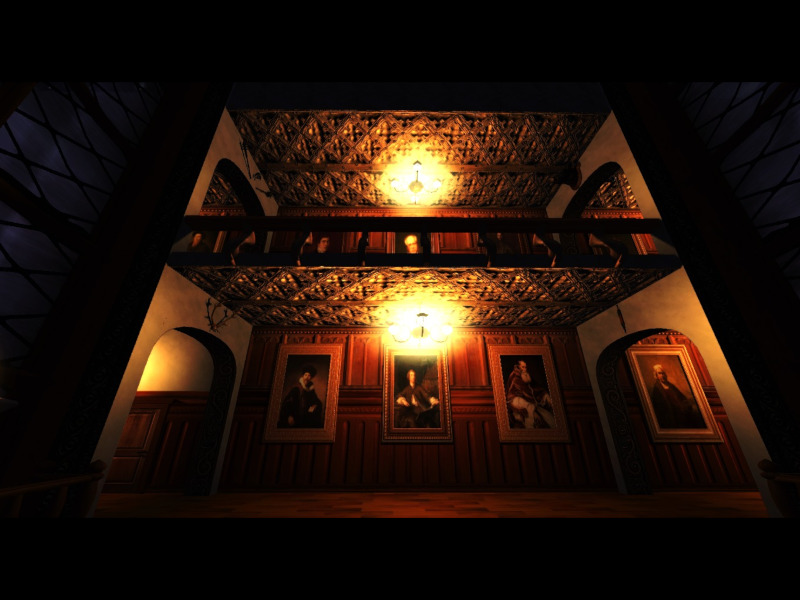 Kingsal: Volta 2: Cauldron of the Gods

Bikerdude and Obsttorte: The Elixir: 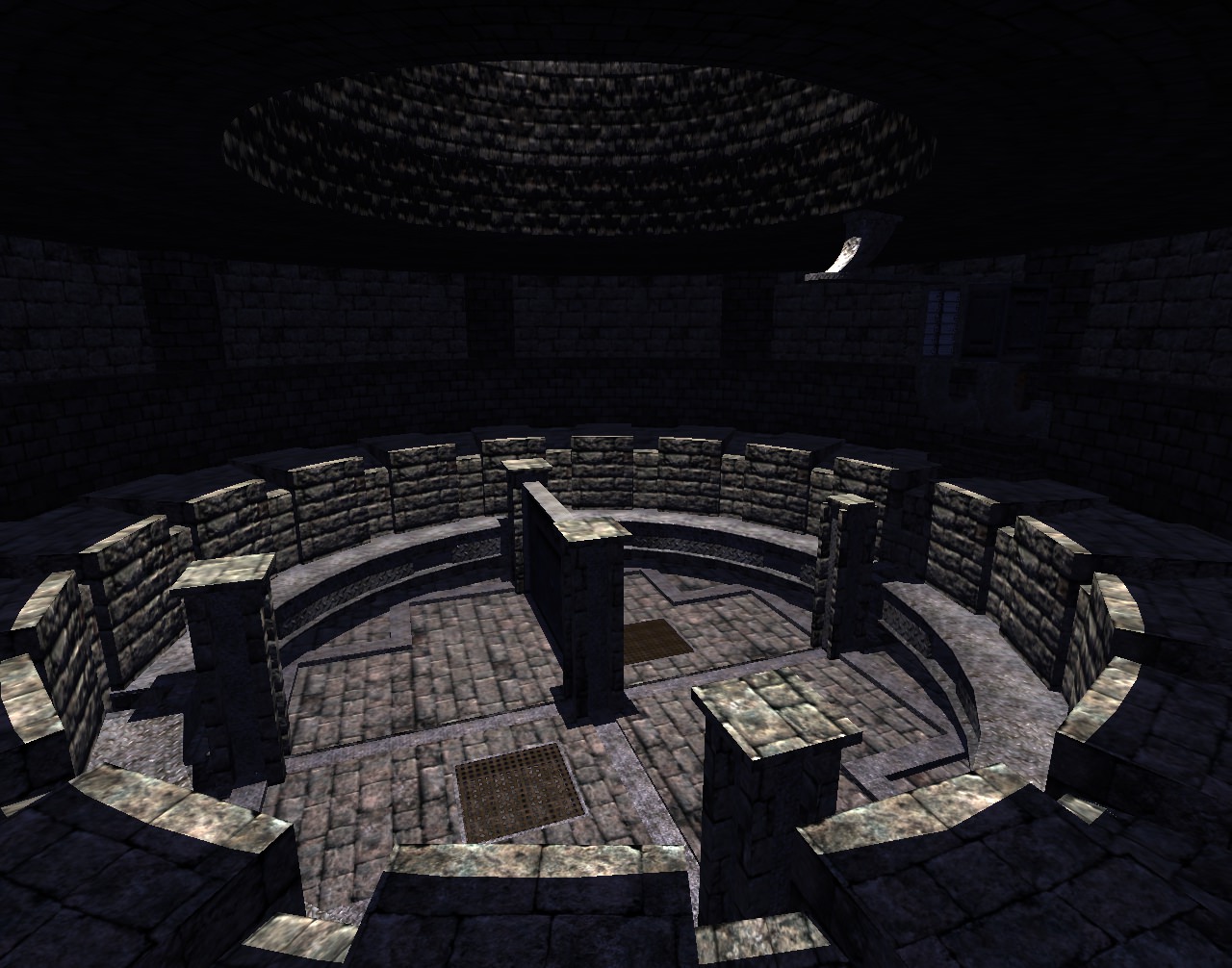 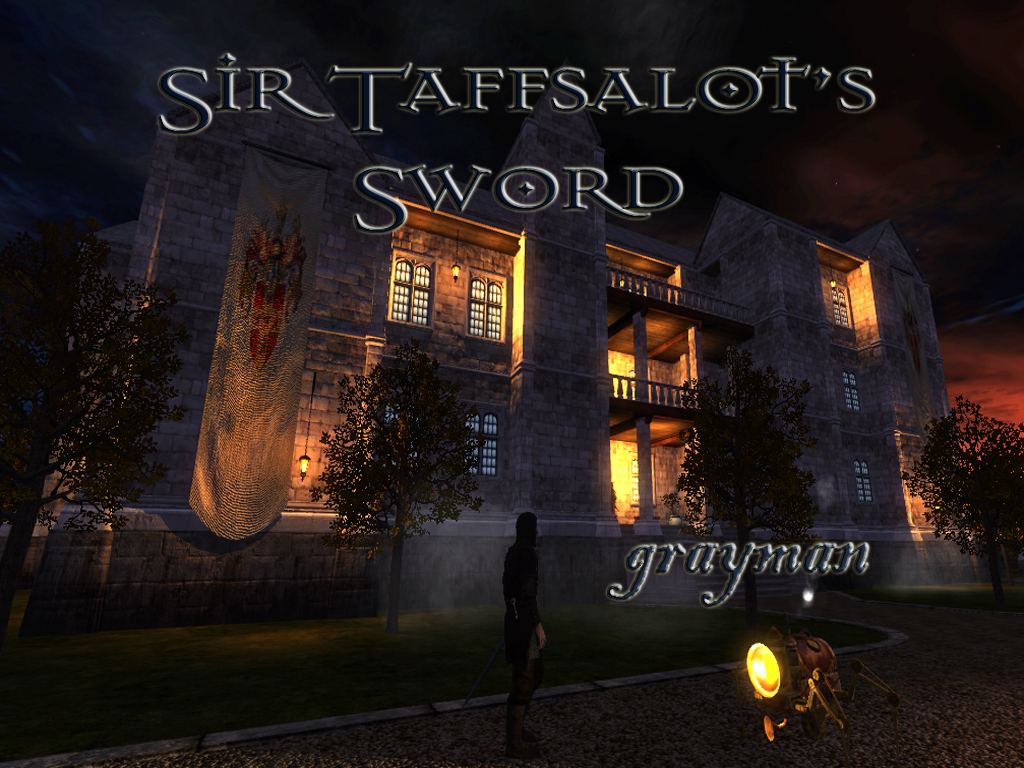 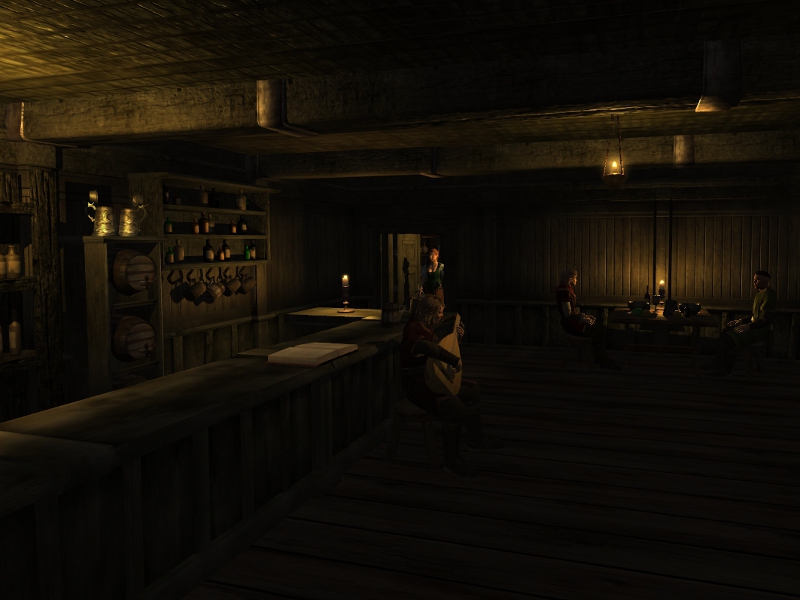 If you haven't touched TDM since 2.05 or earlier, you've really

Especially during the span of 2.05 where amazing commercial quality missions with custom AI, elaborate cut-scenes, and sprawling settings have been on offer. 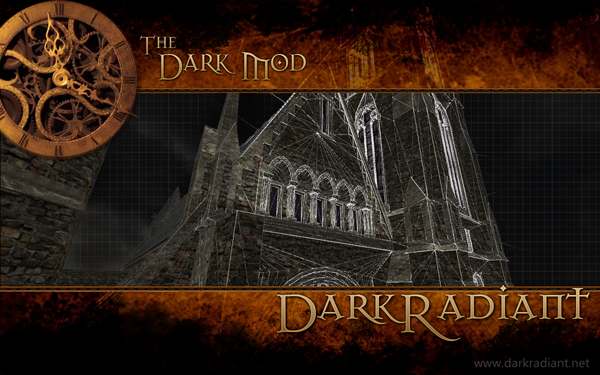 Greebo has kept busy working during his "retirement" as the main coder from The Dark Mod.

Since the last Moddb update, DarkRadiant has been given the ability to merge arbitrary world geometry with models to export all selected items as a new model. Model export has been improved to include vertex smoothing data. There is now a "Favorites" feature that allows you to save your favorite assets to more easily locate them. Lights and Patches can be exported as models. Finally, there is a new stopwatch timer so you can record your build time.

More screenshots and details to follow in the coming days...

Here is a thread about that:

I will say that this was an old discussion and we should probably create a new poll.

Most folks will agree that Moonbo's "Requiem" and "A House of Locked Secrets", Kingsal's "Volta" series, and Goldwell's updated "Accountant" series missions, TDM Team's "Behind Closed Doors", and Dragofer's "Down by the Riverside" rival or exceed the best ones in the old poll listing.

This news. It definitely worth being put on the main page. Esp. after over seven months of only testing.