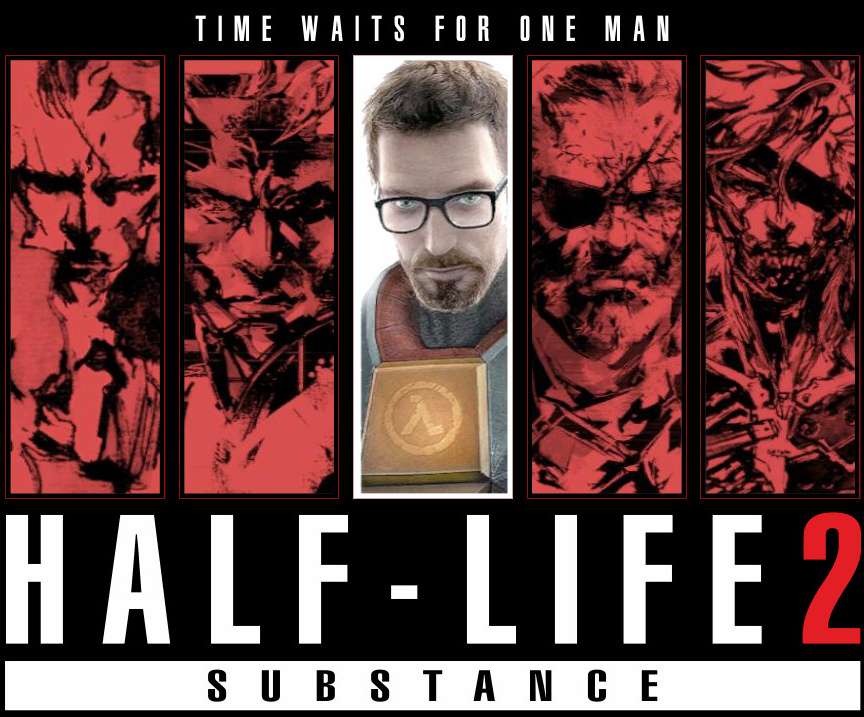 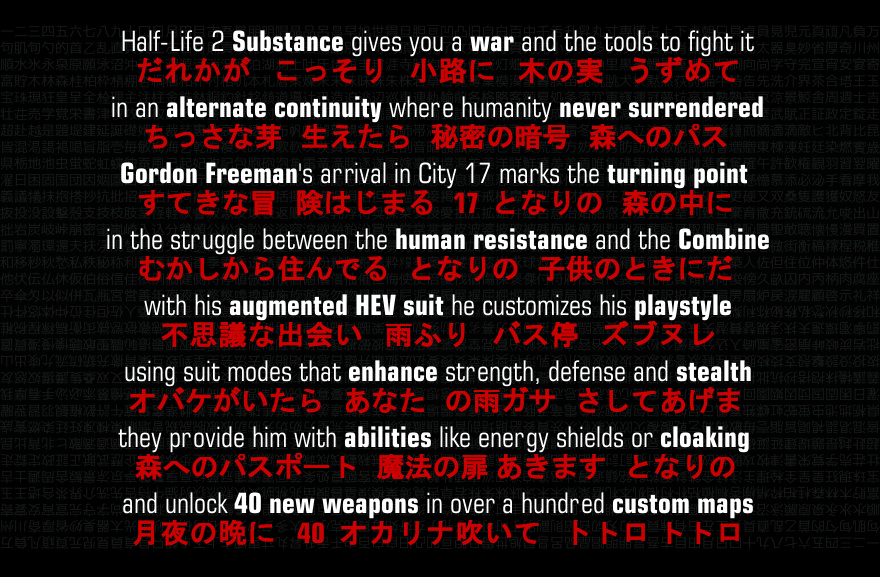 Half-Life 2 Substance v2.0 has been released

Half-Life 2 Substance is back!

The 2005 original is available once again, rebuilt and expanded in an all-new 10th Anniversary Edition, thanks to the support of our community and the crews of System Shock Infinite and SMOD Standalone.

This mod harks back to a bygone age, when innovation with first person shooters was king.
Games like Thief, Requiem or Shogo would explore new approaches to the shooter genre.
Substance sought to merge the different playstyles into a precursor to the Crysis suit.

Each of the HEV Suit Modes comes with its own weapons and abilities, like energy shields or cloaking.
Just like multiplayer classes, which can be switched on the fly and share one gigantic inventory.

Newly available in this version, is the VR Missions map pack: as Substance used to be limited to the
vanilla and remastered campaigns, it can now be played in over a hundred Half-Life 2 classic maps
such as Strider Mountain, The Citizen, Rock 24, Riot Act and Mistake of Pythagoras!

To install the mod, place the Half-Life 2 Substance installer in Sourcemods and run it with admin rights.
Note: Half-Life 2 and Source SDK 2006 must be installed, and run at least once before installing.

The full version of Half-Life 2 Substance. Extract it in Sourcemods and run the installer with admin rights. Requires HL2 and Source SDK 2006.

A version of Half-Life 2 Substance with no installer. Extract it in Sourcemods and move the "hl2.exe" file to SteamApps\Common\SourceSDKBase.

A collection of mutators for Half-Life 2 Substance. Includes fixes for common issues with the SDK and missing DLL files.

Is it possible to make the standalone version of this mod?

Pretty please <3, will send some xmr for that.

How do i player other maps apart from the original hl2?

This mod is the caviar of source engine mods

yo please
what game or what the heck was that deagle from,
in version like v.84 of this mod
dude
that was THE most sick deagle in anything ever
this was the version with the napalm launcher, and other weapons, before the snake switching thing was added in goldfinal....
like i just need to know the source of that deagle...the model, the animation & sound...
thank you

ah..I found the answer I guess in the credits...my only question is...can you guys somehow please upload that! Either to Gmod workshop, or to synergy, replacing the deagle in synergy....please lol, one or the other would be amazing! :D "Snark's deagle" it says in credits..
Thanks again for all yalls great work

I'm having issues with the mouse. It'll randomly snap to other locations or even off target a bit. It makes target tracking difficult to impossible.

Now it no longer works with its Coastline to Atmosphere counterpart (and I REALLY like that mod and combining it with Substance was REALLY fun, seriously...! <3 And I had a LOT of fun back in 2016 when my PC was near 100%, unlike now... TT ), is there a fix for it?

Hey, I've been having a problem installing the mod. The installer keeps saying "the code execution cannot proceed because vstdlib.dll was not found. Reinstalling the program may fix the problem.", along with tier0.dll. I've reinstalled both HL2 and SDK 2006 multiple times, and the files are there but it's not detecting it. ¯\_(ツ)_/¯

I cant find it in my Steam library, I think I did everything right

You need to run the executable (with admin rights) outside of Steam.

Back in the golden days of hl2 modding, this was something I played multiple times, and looking back at it, I sincerely wish I could go back for more :( The new additions to the hl2 campaign struck me with surprise and awe and the dozens of new weapons made the action tight and refreshing, with new additional monsters and player abilities to decimate them with. It's a shame this only partially works with mod fixes following the may 2010 update. Perhaps someone with some free time on their hands…