The Sundering: Struggle for the Old World 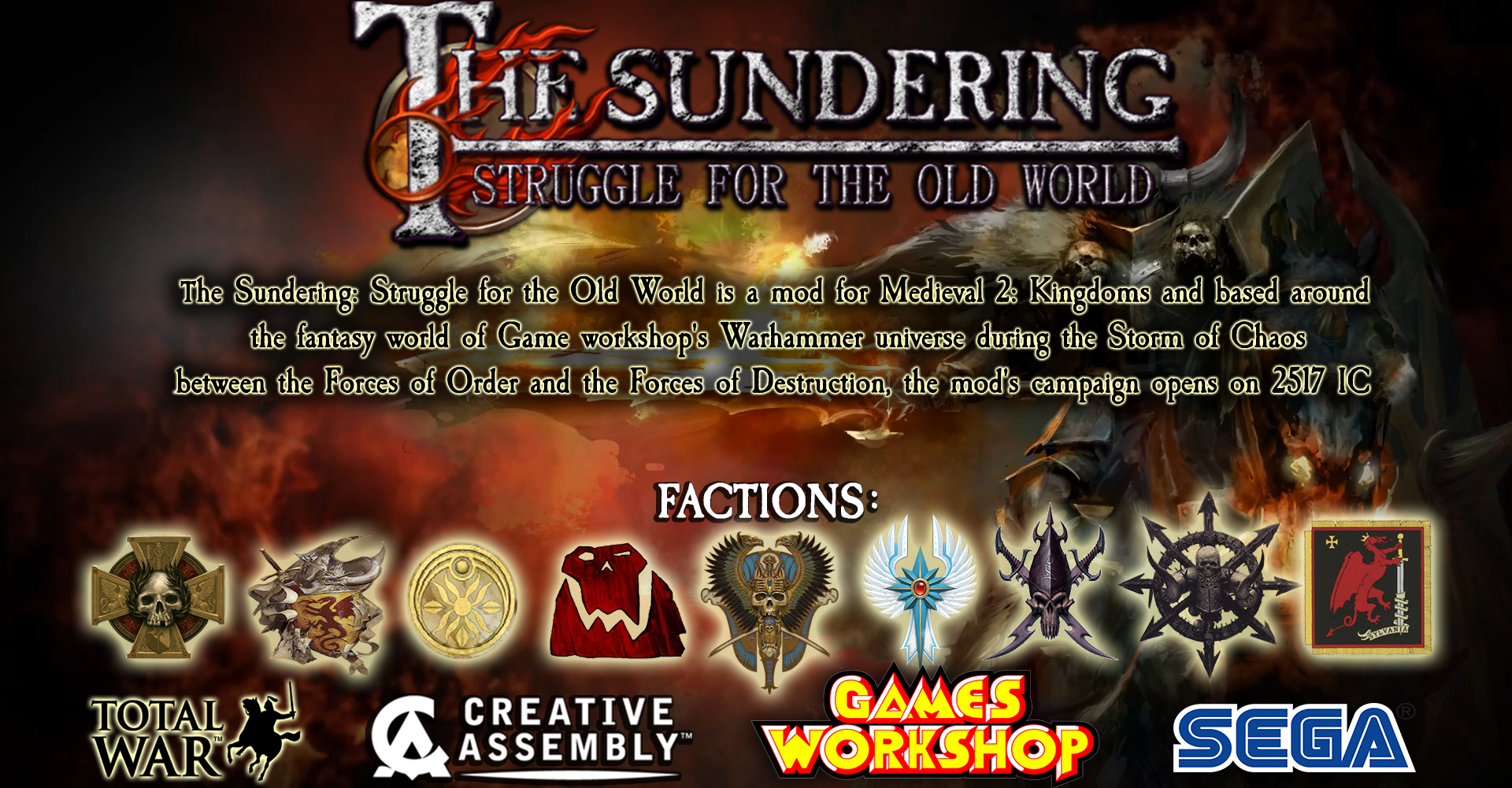 The Sundering: Struggle for the Old World revived as a submod!

Hello, i've recently been given access to this moddb-page by Puvvy, the guy behind this moddb-page and the "A Struggle for the Old World" idea as seen here - i have full access and control and can now update the page at will.

As written above i have created a submod for BotET originally called "Expanded Elves Edition" and based on the idea to port Sundering models to Beginning of the End Times - i then realized i could instead aim at recreating "A Struggle for the Old World" with all the available rosters in the Sundering.

- The end-game would be to replace the Skaven, the Orcs & Goblins, the Karaz Ankor Dwarves, the Tomb Kings, the Chaos faction and Reikland with Sundering units as well.

Using BotET as a base, and working from there - then i would already have the Old World, all the factions in BotET etc - and the work would be to replace what i can with Sundering stuff and change gameplay.

- I have finished a first version using the full rosters of the High Elves and the Dark Elves - plus additional units for the Wood Elves and Bretonnia as seen in 1.1 of BotET. 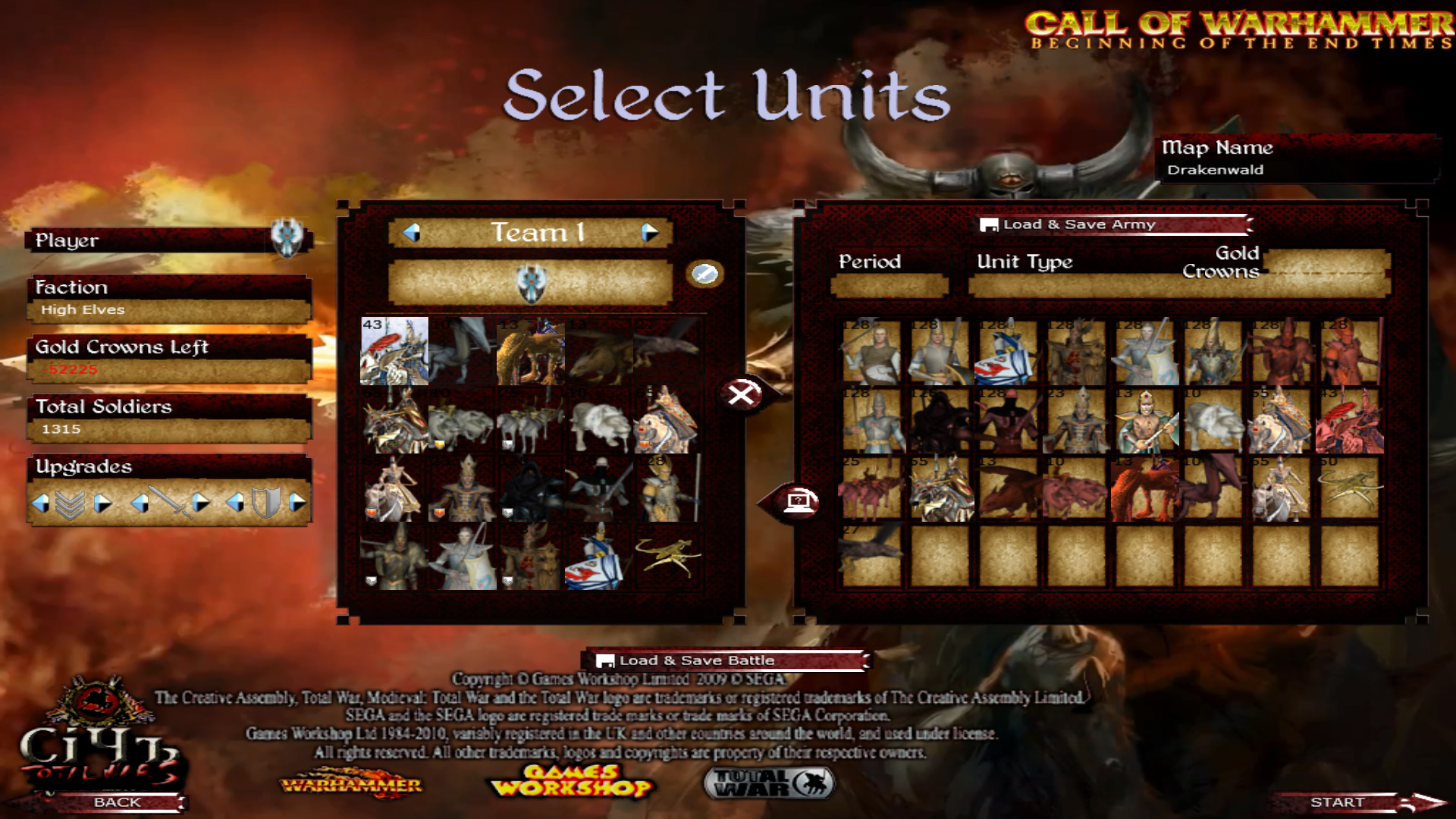 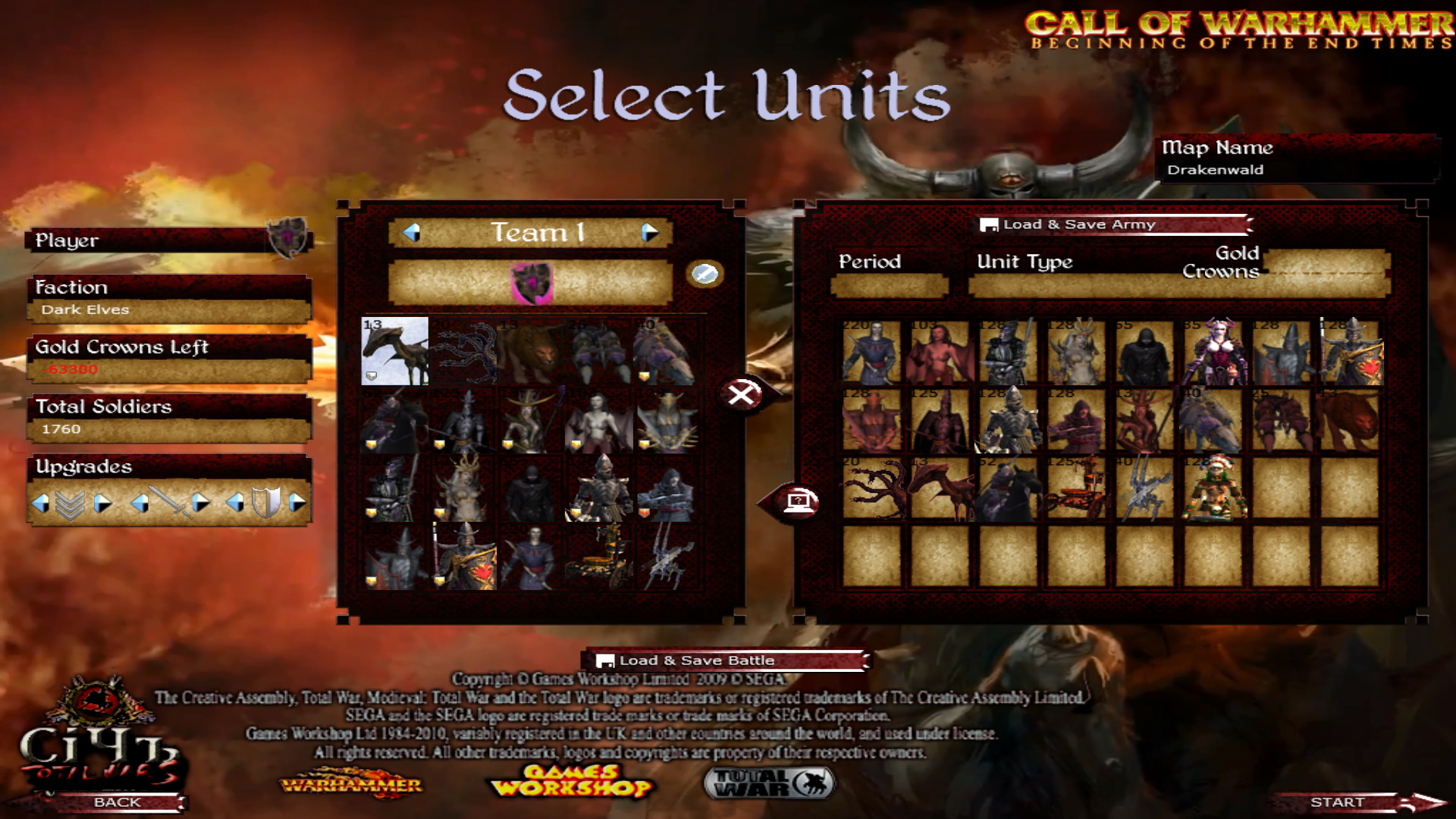 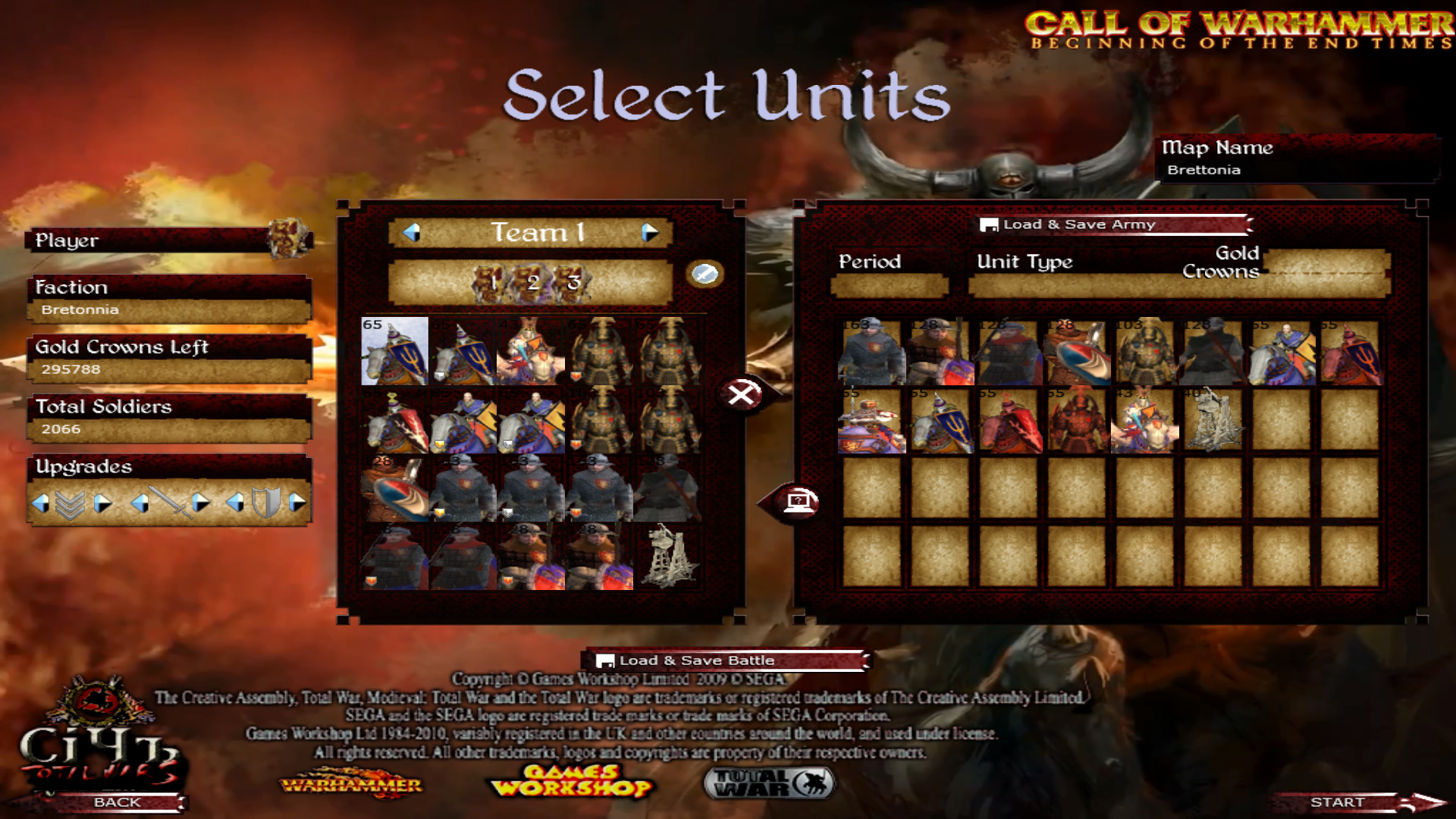 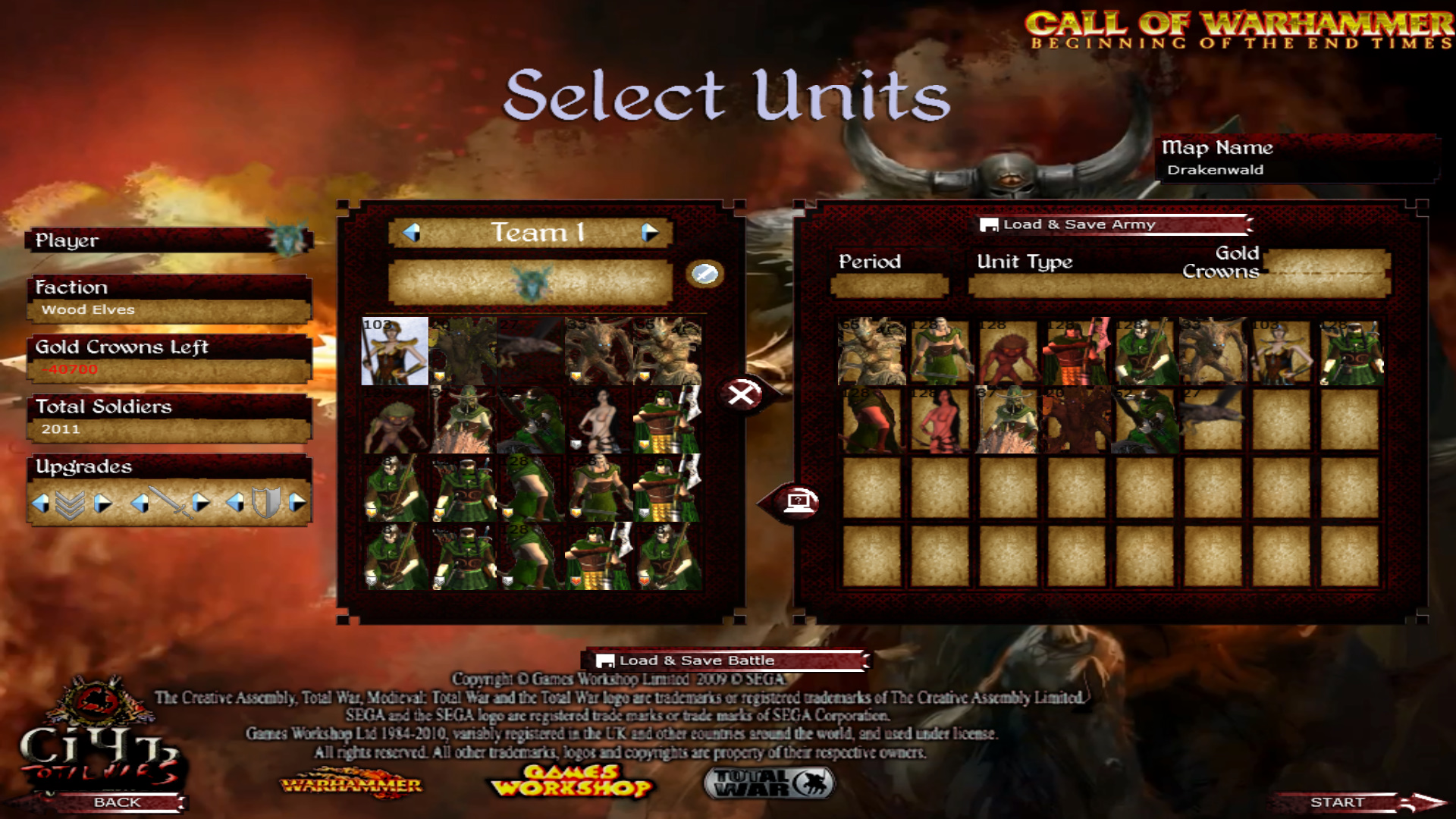 - BotET leaders Tomdoof and WhiffOfGrapeshot has already given me permission to create a submod out of their mod Beginning of the End Times. WhiffOfGrapeshot, as an earlier developer and member of the "A Struggle for the Old World" sundering-team - also said if his permission is enough i have permission to use Sundering assets/models in BotET as well.

- Not only that, but BotET and CoW (Call of Warhammer) is already using lots of Sundering assets - even though i believe they use mostly parts or settlement textures and not the full rosters.

- According to WhiffOfGrapeshot Kolwen would probably not be against this use of the models he riged. And as far as the GW is concerned their permissions were for anyone who is working on warhammer mods to use them i've heard. Like CoW, Sundering or any submods of those.

In order to release my submod i will first need to lessen it's size as it's at 9gb and needs to be under 8gb in size. I do also need to fix some issues with recruitment as the AI spams militia units - at least the High Elven AI.

- Many unused assets will be removed from the files. In the worst case certain old units used as officers will also be removed if i can't lower the size of the mod otherwise.

As i've now gotten access to the MODDB-page, i feel i have enough permissions, both from the moddb-page creator, WhiffOfGrapeshot (old member of the Sundering team and current head of BotET together with Tomdoof) to release the submod in it's current shape.

I have uploaded two videos playing battles between the changed factions. Chaos have been slightly affected too. It will be BotET with Sundering rosters for the factions mentioned currently - but the end-goal is to have all the rosters of the Sundering and then we could possibly replace the menu etc too.

PS: I have recently started a Let's Play just for testing the mod as the Dark Elves. I will link the videos down below.

Warhammer: "A Struggle for the Old World"-WIP Beta: Dark Elves VS High Elves!

Warhammer: "A Struggle for the Old World"-WIP Beta: Bretonnia VS Wood Elves!

--CARTOON VERSION OF SHADERS FOR A CARTOON LOOK!WARNING IT'S BAD FOR READING--These shaders will make your game look top-notch!Of course you need better...

--PERFORMANCE VERSION OF SHADERS FOR WEAKER PCs--These shaders will make your game look top-notch!Of course you need better PC to run this. Installation...

--QUALITY VERSION OF SHADERS FOR STRONGER PCs--These shaders will make your game look top-notch!Of course you need better PC to run this. Installation...

Hi, any news? Is This mod still alive?

It's finished already back in 2018 (my version) but I haven't been able to release it.

Any news about the permissions?

Is working on this mod still?

It's finished in it's first form.

Any updates on getting permissions or are you concentrating on your other mod projects, there's so many beautiful units out there hope you're allowed too use them someday.

This mod is ready, but too big for MODDB - i also do not dare releasing it without those permissions. Could risk other mods.

OK thanks for the reply, shame you couldn't get all the permissions, guess it's too big for TWC also, what about Mediafire ?

What are you writing about? This mod isn't released.

The Sundering: Rise of the Witch King has a different page.

Single, Multiplayer & Co-Op
Tags
Embed Buttons
Link to The Sundering: Struggle for the Old World by selecting a button and using the embed code provided more...