Initially founders of the World of Elder Scrolls hardly reflected on what revolution in the industry will make their child – the third part of an immortal series - The Elder Scrolls III Morrowind. Morrowind is very similar to Total War series here. And, as life shows, the people feeling passion to strategy, frequently also feel passion to RPG. First of all for such people, such as we are, who feel enjoys contacting with other worlds and civilizations we are making this mod.To head one of the Great houses for leading to its prosperity and to reunite dark elves under your power. Become the head of an imperial legion of a province, to put, at last, to the place of freedom-loving elves, or to head corprus hordes of Dagoth Ur and to banish all n'wah from the country. As leader of nords try to finish withering Redoran, or even to revenge dunmers for hundreds years of humiliation, having headed one of clans of Black Marsh.To combine incompatible, to transfer on base of Total War carefully maked world without having lost unique atmosphere which is not similar to something else. To embody dream of many fans of a series about more scales. And enjoy it of course. We plunge into the world of TES. Watch us. 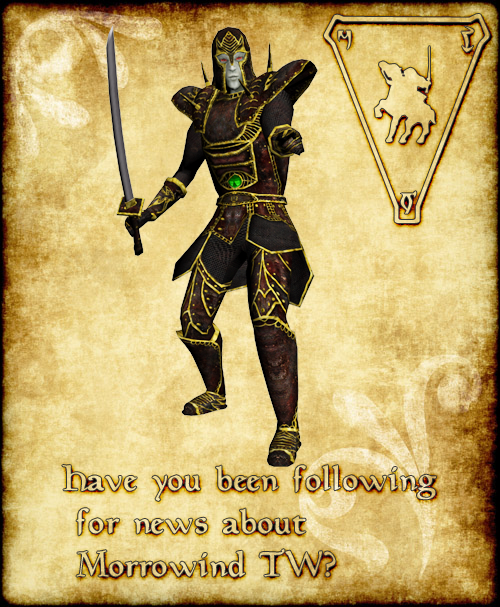 So as to give you smth to test we have finally decided to release the mod beta version with pared down campaign map. Campaign will be devoted to the first stage of Vvanderfell colonization and let you to fight in the most populated West part of the island. Game starts in 3E415, you take control of 1 of 4 fraction: Imperial colonists, Great House Hlaalu, Great House Redoran and Ashlanders from Urshilaku tribe. Nord fraction will consist of pirates and raiders, they will terrorize the north coast of West Gash

Everyone has their own goals: Imperials are trying to extend their hegemony without increasing number of troops. In case of huge troubles they could under certain condition receive reinforcements from the continent.

Hlaalu to secure dominance should work harder to develop economy. Using diplomacy and mercs Hlaalu will expand their influence under this region.

Redoran first of all must overcome skaal’s raids and constrain ashlanders from the North, proving that they are still capable of showing their military might. In order to achieve this you will get small group of elite redoran warriors.

Ashlanders are against everyone: northern fur guys, renegade and traitors of the true faith, invaders from the West. Ashlanders exploit everything they can get from this scorched earth: they use guar as mount, able to hide in volcanic wasteland and could use mighty but rare silt striders.

Every fraction can improve their economy and recover lost knowledge by exploring abandoned dwemer and daedric ruins if they are able to banish dwellers. Also ruins can cause lots of troubles: you must keep your eye on them because ruins attract rabble, and they will use ruins as the base for raids and revolts.

Not released, as it never were finished despite the article.

Hey it's me Nuka from discord, I really wouldn't mind translating it lol. If It has much potential of course.

It does have potential, even though the map is only half of Morrowind - and it has four factions playable and one spawning.

But it's not playable, even though the campaign is stable - but it has unfinished/unpolished bits.

"A couple of months ago I tried to check the performance of the current build under the Steam - did not work. And before it worked, I remember. Maybe I will reanimate and fill in somewhere, if I feel like it."

I did send the mod to my Warcraft Total War partner WarcraftHero, and he managed to fix the issue with the mod not starting - it would seem it were due to text-formating and wrong format of the .txt-files in the data-folder.

When loading them in Notepad++ they were correct so he did somehow copy those lines of text to the files and managed to fix it. I've been sent the fixed version. It is of course in russian so i don't understand much.