"While this plays a bit more like a movie than a shooter, this is still one of the most ambitious 'Far Cry 1' mods we've seen to date. This takes the player on a trip through the locations described in William Shakespeare's 'The Tempest' using the 'Far Cry 1' engine! Started as a media arts production from German university students, this takes the idea of a 'Far Cry 1' mod to a whole new level." MadeMan Manual 2011

"This does sound really interesting - will dig out my copy of Far Cry and give it a go." Chineseroom (Dear Esther)

Projekt A.R.I.E.L. (ARTificial Research in Electronical Live) proudly presents the SturmMOD, part of a theatre / media arts production started in summer 2008 as an experiment by students of the Scenic Arts at the University of Hildesheim, Germany. The mod was performed live and provides an environment in which places and events described by William Shakespeare in his play "The Tempest" (in German: "Der Sturm") can be visited, explored, experienced and reflected on by the players.

!! Please make sure that your copy of FarCry is patched to version 1.4 as the scripts in the SturmMOD may not work with prior versions of the game and read the INFO.txt after downloading to learn how to set up the mod !!

Finally: Have fun visiting Prospero's Island and don`t hesitate to give us feedback by rating, reviewing and/or commenting on the mod, we're looking forward to it! :)

"Let me not, since I have my dukedom got
And pardoned the deceiver, dwell
In this bare island by your spell,
But release me from my bands
With the help of your good hands.
Gentle breath of yours my sails
Must fill or else my project fails,
Which was to please. Now I want
Spirits to enforce, art to enchant..."
Prospero, Act V of Shakespeare`s "The Tempest", Epilogue

After three months of learning how to map in the Far Cry Sandbox Editor and how to mod the Cryengine 1 we were finally ready to visit Prospero`s virtual island during our live performances in Hildesheim in the summer of 2008 as a part of our research on the possibilities of a creative exchange between digital media and the live medium theatre. 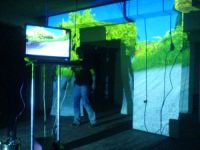 On the 12th of July 2008 the first version of the SturmMOD was released to the public on ModDB, followed one week later by a guide to give players hints on which spots to visit on the island. The feedback ranged from a "mod of the month" review in the September issue of the German video game culture magazine GEE over a feature in the December issue and on the DVD of the Total PC Gaming Magazine (UK) to comments of players who demanded more content, more gameplay and a better introduction to the background story of the "Tempest".

Looking forward to using the SturmMOD again for our performances at the diskursfestival (festival of young performing arts) in Gießen, we decided to develop a new version of the mod. The goal was to offer playful approaches to the situations and characters of the "Tempest" while still giving the players the freedom to find their own way over the island collecting informations about the play, our performances and our research. As some features we wanted to have in the version 1.1 were difficult to program and implement the development took longer than planned. But finally, on the 18th of May 2009, an enhanced version of the SturmMOD was uploaded to ModDB, not only in a DELUXE package with additional videos, but also in a SMALL edition for users with a low bandwith. 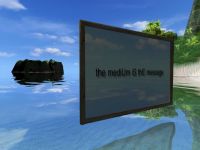 In 2009 projektariel took the experiment one step further by not only giving lectures on the topic "creative exchange between theatre and video games" but also by using custom versions of the SturmMOD during the lectures as an walkable virtual archive of our research and as an alternative to Powerpoint. The first lecture was held at the conference "Culture and Computer Science VII - Serious Games" in Berlin on the 15th of May 2009. It spawned not only the release of the version of the mod used in the lecture but also of the whole text of the lecture [PDF - GERMAN] to enable players to replay the lecture themselves. One week after our visit in Berlin we were invited by the Austrian video game culture club SUBOTRON. The lecture as well was captured in different media: the SturmMOD Vienna Lecture and the recording of our lecture [MP3 - GERMAN]. 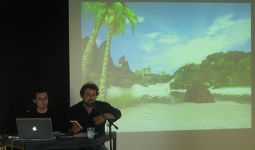 Never say never: Even though we hadn't planned to develop the SturmMOD any further, we were more than happy when in 2011 the renown Far Cry modder Didjay made playing Shakespeare look as good as never before by his remake of the SturmMOD (v1.2) featuring not only improved mapping but also new effects and models! 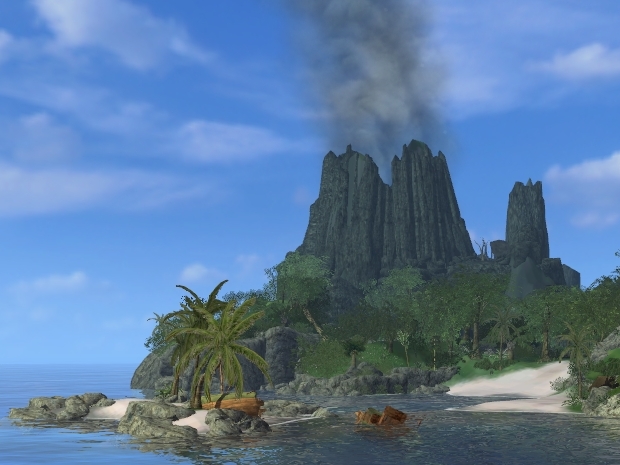 The year 2012 then saw the release of language patches for the SturmMODv1.2 making it possible to not only play the mod in FRENCH, GERMAN, SPANISH and FINNISH but also new in RUSSIAN! And as we ourselves were happily surprised too often on how the SturmMOD continued to evolve to new stages - like in the case of 2013's Caliban Edition - this may be the final curtain for our project ... or not ;) ... 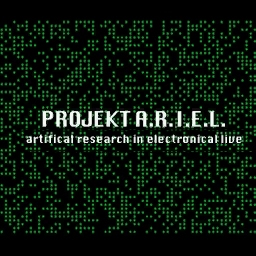 As the SturmMOD was an experiment on how to transfer an ancient theatre play into a modern video game environment we would like to conduct the next step...

SturmMOD one of the topics of our lecture at SUBOTRON!

We are proud to announce that the experiences in creating the SturmMOD and its use as a scenical playing field will be one of the topics of a lecture...

The Past and The Future

A retrospective on the success of the SturmMOD and an outlook into its future!

In its "monthly guide to the best mods" the Total PC Gaming Magazine features the SturmMOD - not only in print but also on its DVD!

Inspired by Tim Crouch's play "I, Caliban" and "Dear Esther" this new version of the mod lets players experience the island from Caliban's point of view...

This archive not only adds RUSSIAN to the languages the mod can be played in but also adapts existing localizations (GERMAN, FRENCH, SPANISH and FINNISH...

Due to renown Far Cry modder Didjay`s amazing mapping skills as well as his awesome new effects and models (don`t forget to check out his "Far Cry 2010...

This version of the mod is a final archive of our work which contains not only the media used in a lecture on the topic "Going to the next stage - possibilities...

This is all the lie!!! Im still waiting and this mod is not released!!!

It is not clear what to do? found the electrocutioner, book, and then you walk as a fool and nothing happens when the yacht is confusing ...

Dear vobler63,
first of all thank you for your interest in the mod! :) As there is inded no mission to fulfil it may help to read/know the Story.txt, Prospero's diary or even the original play to better understand the references that can be found while exploring the island. Anyhow, if you still think that you encountered a bug and not a feature, it would be helpful if you could send me a PM so I can fix the problem.

Dear projektariel
Can you tell me What the file is required and how to install this mod ?
sorry about my english

Dear KuroiChocolate,
thanks for your interest in the SturmMOD. You'll first need the game "Far Cry" patched to version 1.4. To install simply download the version you'd like to play (e.g. "SturmMOD v1.2 [ENGLISH] Remastered by Didjay") and unzip the archive into the "Mods"-folder of your "Far Cry" installation (e.g. "C:/Far Cry/Mods" (if there isn't a "Mods"-folder, you have to create it before unzipping the mod). Then you click on the file "SturmModv1.2.cmd" in the folder "Mods/SturmModv1.2" to load the SturmMOD. Hope these instructions were helpful, enjoy playing the mod and looking forward to your feedback! :)

Thanks a lot for your kind words! And just track us if you want to get notified as soon as the upcoming new version of the mod is released! Also, we would be grateful if you could find time to give the SturmMOD a rating - or even write a short review on what you liked about it! :)

what is this mod about ?

Congratulation! it was a pleasure to remaster your mod. I hope this might help to know your artistic talents of a new genre in theater arts media.

Good success and good luck for the future! ;-)

Shadow over the Pathoras Doom II