1. Seek out and explore strange new worlds.
2. Boldly go where no man has gone before.
3. Establish contact with any sentients.
4. Capture and bring back non-sentient lifeforms.
5. Record alien lifeform data.
6. Bring back alien artifacts.
7. Bring back any valuable minerals (including endurium).
8. Keep from getting brutally killed.

Good luck, and a safe return.

Dev Diary 2: Creating the Starport for Starflight Heroes of Arth

Hi guys it's Blake again! I'm helping out John a bit on his awesome Starflight Heroes of Arth project similar to how I help out Marvin on his Starflight Remaking of a Legend project. I'm a big fan of the original Starflight games (in particular the SEGA Genesis/Mega Drive version) and am passionate about the many fan projects out there. So much so that I recently made a video series trying out every single Starflight fan game out there digging up private demos and content the world has never seen before! One of my absolute favourite fan projects is Starflight The Lost Colony which at this point in time is still the only finished SF fan game in existence. For many years I've dreamed of modding SF-TLC to have Genesis graphics but lacked the time, talent and patience lol! Thankfully John has those qualities so when I found out about his project I knew I just had to help him!

I recently helped John make a cool Genesis style title screen (covered in dev diary 1). So the second thing I wanted to help John tackle was the scrolling starport background.

I knew it wouldn't be easy trying to mount low resolution 90s graphics over the top of a big high resolution TLC starport background image but I was determined to get it done haha! Here's the results so far..

- The robot walks on the upper bit of the floor so I stuck in the genesis bottom floor bit to start off as i knew I could get away with it haha.
- There's way more upper area in TLC! So I had a choice of either extending the wall up or lowering the ceiling. I decided on the latter as hopefully it will increase the scrolling 3D effect! Although nothing can beat that lovely parallax scrolling 3D room trick of the original.
- The spaces between the doors all seem uneven in TLC so it was a bit of nightmare to try and line up the genesis walls around the doors but I did the best I could lol.
- I thought about keeping the TLC space windows & posters but John didn't want them there, plus the art style and resolution are very different so it would have looked weird sticking them over the top of the blocky genesis walls.
- I wanted to keep the Glush Cola poster though so John suggested I lower its pixel count to better match the blocky genesis stuff so hell it I went for it haha. Also made a good blank wall space filler now that the science window is gone.

Then I extracted the spaceman frames out of the Genesis game and gave them to John. He replaced the robot animations with each Genesis spaceman frame as also raised him up a bit to help him fit above my raised floor. 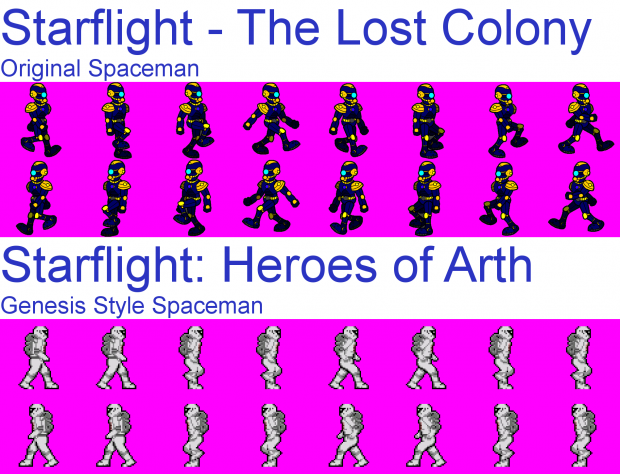 Here's a video of the finished result. Hope you guys like! :)

We're looking at making a better ceiling and John hopes to recreate the 3D parallax foreground floor/ceiling scrolling effect from the Genesis version one day too.

Please make a backup (if you wish) before installing as the Starflight – The Lost Colony files will be overwritten! Drag the ‘data’ folder and place...

Please make a backup (if you wish) before installing as the Starflight – The Lost Colony files will be overwritten! Drag the ‘data’ folder and place...

how can i change the FONT color in cantina , i cant read it in the current yellow ? thanks in advance

Hello welcomed Guest! Unfortunately, the Starflight TLC fonts cannot be changed in either of the Starflight releases (TLC & HoA). However, the fonts will be changed to the Sega Genesis / Mega Drive fonts with solid readable color very soon. The mod is still a WIP and there are a bunch of big surprises on the way including the next release. Stay tuned for more

Having Problem: I replace the SFTLC data file with the new data file … No changes ??? This was a fresh copy of SFLTC with no changes. I would love to Run this gamw … I'm an OLD SF fan !!

Another important note to mention is that if Starflight TLC does work on your computer / device, then the mod should work if you hear the Genesis music. All the artwork is found in game, the main menu and other UI for the game will be released in the next version.

Did the game work before you replaced the game files? It is possible that Starflight TLC doesn't run well by itself. The game should be tested and optimized for your computer first before applying my mod. If this is the case, I will include this in the next version.

Just one question. Is this mod for the original game or for the remake project?

This mod is for Starflight - The Lost Colony. It appears to look like it's for the Starflight Remake Project only because we are still waiting for ModDB to allow me to attach this mod to Starflight TLC.

I understood. Thank you!

Very cool work! A lot of potential here! The idea of going on a brand new adventure with Sega Genesis/Mega Drive graphics and sounds is appealing to so many Starflight fans! Keep up the good work! :)

Thank you, Blake! It is great to be back again with modding Starflight. I'm excited to release the next Starflight HoA version and creating a dev diary. :)

Back to the Future - Liberty City Grand Theft Auto IV