Call of Misery started as an unofficial port of Misery 2 to Call of Chernobyl but has since gone on to add its own features and changes. There are now many addons for CoM itself, most of which are released in Russian. This mod has CoM and some of the popular addons for CoM along with some of the translations for them. Credit will be given in each mod and addon to the creators and translators.

It’s been a long time since any news was posted about this project for English-speaking audiences, but Dead Air, a new free-play modification based on S.T.A.L.K.E.R.: Call of Chernobyl, is very much alive and well.

Dead Air Team has publicly announced and revealed a multitude of features and information regarding the upcoming project!

First of all, the modification puts high emphasis on graphical elements: the most notable addition is, perhaps, a new dynamic particle system that adds both outdoor (e.g. fog) and indoor (dust) details into the world:

New and adjustable post-processing options, water reflections, changed flora textures — this, along with a customizable color palette and weather presets, drastically livens up the atmosphere: 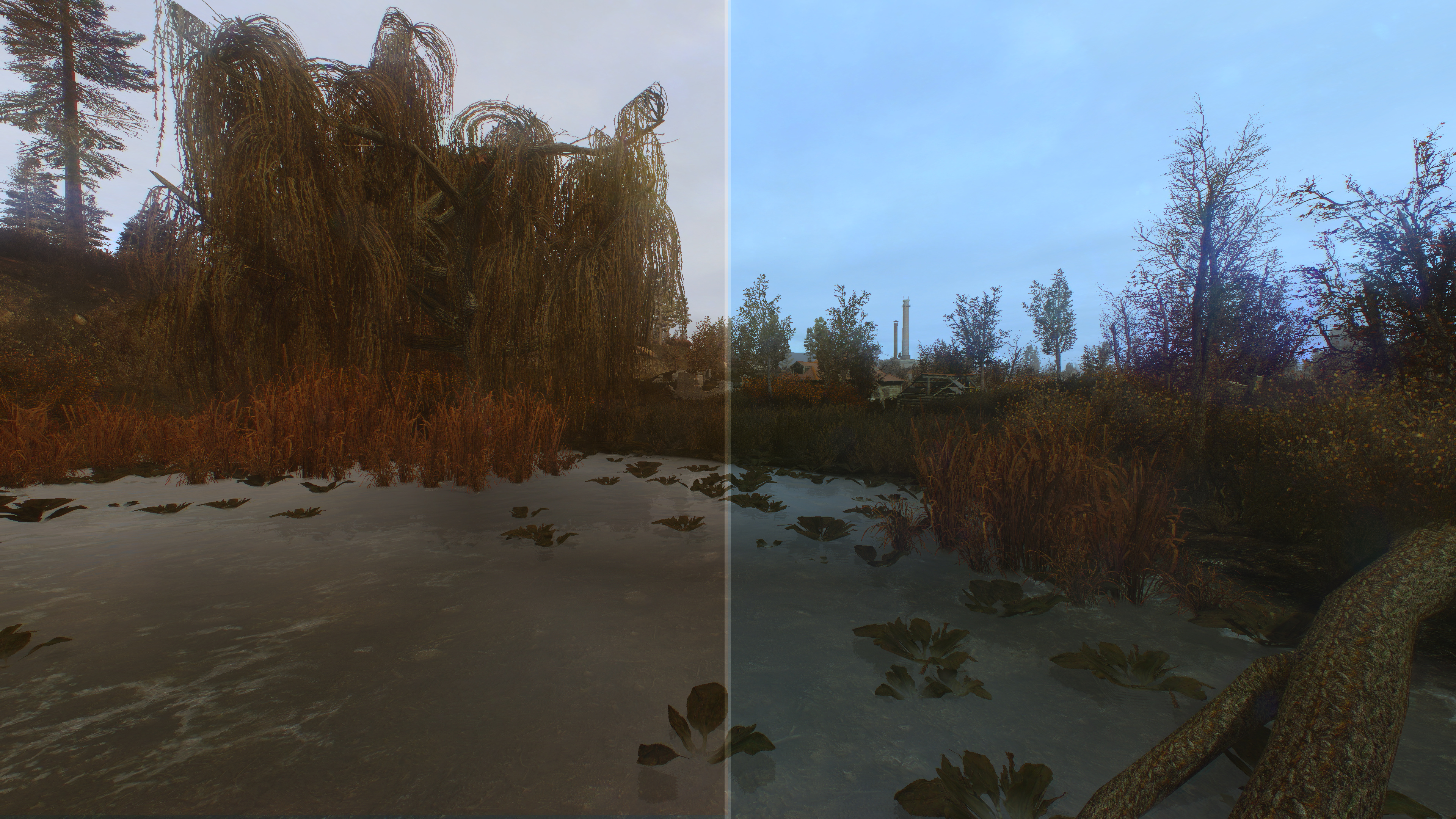 With in-game sliders, colors can be changed on the fly to your liking

The player can now use a lighter, various flashlights, and chemical sources of light, all of which have unique properties. It is worth noting that a dropped flashlight or a glow stick will not cease to operate, and some players might find unusual usage for this feature. Certain light sources in inhabited areas only work during certain time of day, while others can be switched on/off by the player, adding a small, yet palpable touch of interactivity to the world:

Staying under rain with your helmet equipped prompts the appearance of water drops on it. With a designated hotkey, the player can clean their helmet visor:

Additionally, there is a new sound base, which further enhances the feeling of the game. Sounds now produce echo where they should and can be muffled by other objects as shown below:

The melee system has been expanded: the player now has the ability to utilize various tools, such as axes, shovels, hammers, and other instruments, as melee weapons. The same is true for other NPCs, which now use them considerably more ably, whether they are in a desperate situation fighting other humans or when they are saving bullets in order to kill a wounded mutant. Another noticeable addition to the melee system is a swift knife attack, which can be performed while holding other weapons; this move can be extremely helpful in intense close-quarters skirmishes with enemies:

Some changes were made to the process of reloading weapons. It is possible to reload them by dragging ammo boxes onto them, which is handy when your belt is occupied by artifacts or you don’t have it all. Like in Clear Sky and Call of Pripyat, different outfits have a various amount of belt slots; they function similarly to the way they did previously, except when ammunition is placed in these slots, the player is able to reload faster:

Helicopters now patrol in the vicinity of the Zone during the nighttime and now have a searchlight, emitting a large, volumetric cone. Their model of crashing was changed and they now produce sound when falling:

The stealth system has not been left untouched. Previously, enemies could be highly perceptive and, in specific situations, had an ability to spot the player through myriads of bushes. Furthermore, the player’s stealthiness now depends on the weight of their gear, active light sources, and weather. Now, relaxed enemies (unaware of a threat) will not spot the player so easily if they is are properly outfitted, careful, and skillful enough:

Outside of combat, other stalkers behave more realistically. Nearby gunfire will interrupt their anecdotes and vodka drinking, and they will quickly assume combat positions. Leaving items of value in a public chest is a risky action, and you are no longer the only one in the Zone who has an interest in stashes:

For those who don’t have a powerful rig, there are good news as well:

Campfires now properly work on all renders (previously, R1 users had been experiencing static, ever-burning campfires). The Burnt Fuzz anomaly and environmental glass now also work properly with R1 and do not appear in bizarre colors anymore. Grass during foggy weather cannot be seen through the mist over large distances.

Looking for a volunteer to help with some 2D texturing/editing

I was hesitating about translating Echo of Misery modpack because I thought that someone did the English translation for it but now I decided to go for...

Quick summary of the history of Call of Misery, followed by the first English announcement of the "post-release" version, clarifying the current situation...

A Standalone repack of CoM (1.0d fix2) with the English translation (1.0.14). This is a fully installed and updated copy of CoM. Unpack the file to any...

English translation for Call of Misery 1.0d fix 2 and later.

Anyone knows who sells batteries for Gauss? For now my only option is to farm Monolith bases to have tiny chance to spawn someone with Gauss and praying that RNG won't mess with me...
How does the storyline works? Got the key from the Doctor, did questline for WishGranter and that's it? Can't access lab in the Generators.

uhm can u buy it from cardan

why whenever i open the option the game always crash ?

I LOVE the mod but I honestly have to say that if you so much as even get a nick of radiation it starts to kill you pretty fast and it's pretty damn annoying because you have to constantly try scavenging or be buying some anti-rad items and using up your med kits like crazy. I barely even get radiation and it degrades my health by a chunk every few seconds. Would there be a way you can make an optional file for the radiation mechanics to be like the standard game?? Or where can I find the correct files for the radiation settings?

Edit: Nevermind, I got to the file where I can edit the radiation damage and immune stats. A LOT better now.

Try not to stand in radiation fields for long... Never had a problemme with this, using cigs all the time.

I amghetting the missing msvcp120.dll error, yet I have repaired visual studio 2013. Any ideas?

what is the beep sound for? If I am still standing, a sound comes after about 20 seconds, a Windows error belongs, just a little deeper in the tone

CoM is the only modification that is worth your time. No joking or kidding around