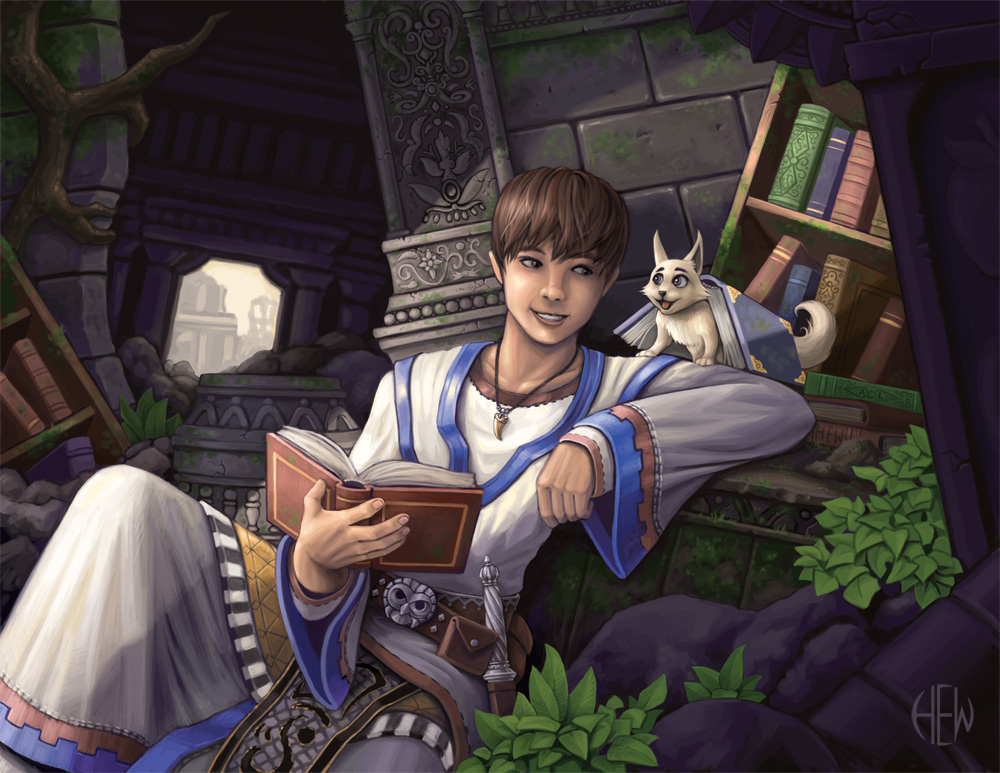 (Current tutorial is for 1.0.2 Final version of the MOD)

In Skilled Magic Calradia we have 11 BATTLE magic schools, which are working slightly different.

a. Arcane magic - create arcane rifts or manage ice and fire together without harming alies.
b. Elemental Artefaction - Air, Fire, Earth and Ice missiles.
c. Advanced Elemental Magic - deal damage to different areas.
d. Telekinesis - create and manage dancing weapon and damage far located opponents with melee hits.
e. Holy magic - heal all people around or harm evil beings.
f. Mental magic - turn NPC into state of fighting with each other or make them your servants.
g. Portal magic - teleport yourself or your opponents for short distance in battle at will.
h. Necromancy - summon great number of weak skeletons up to limit and sustain them.
i. Blood magic - stay near opponents to suck their blood or manage their and your blood.
j. Magic of Illusions - manage movement of opponents and allies and create illusions to fight by your side.
k. Energy Manipulation - use different energies to evoke self-defending effects without any artifact. 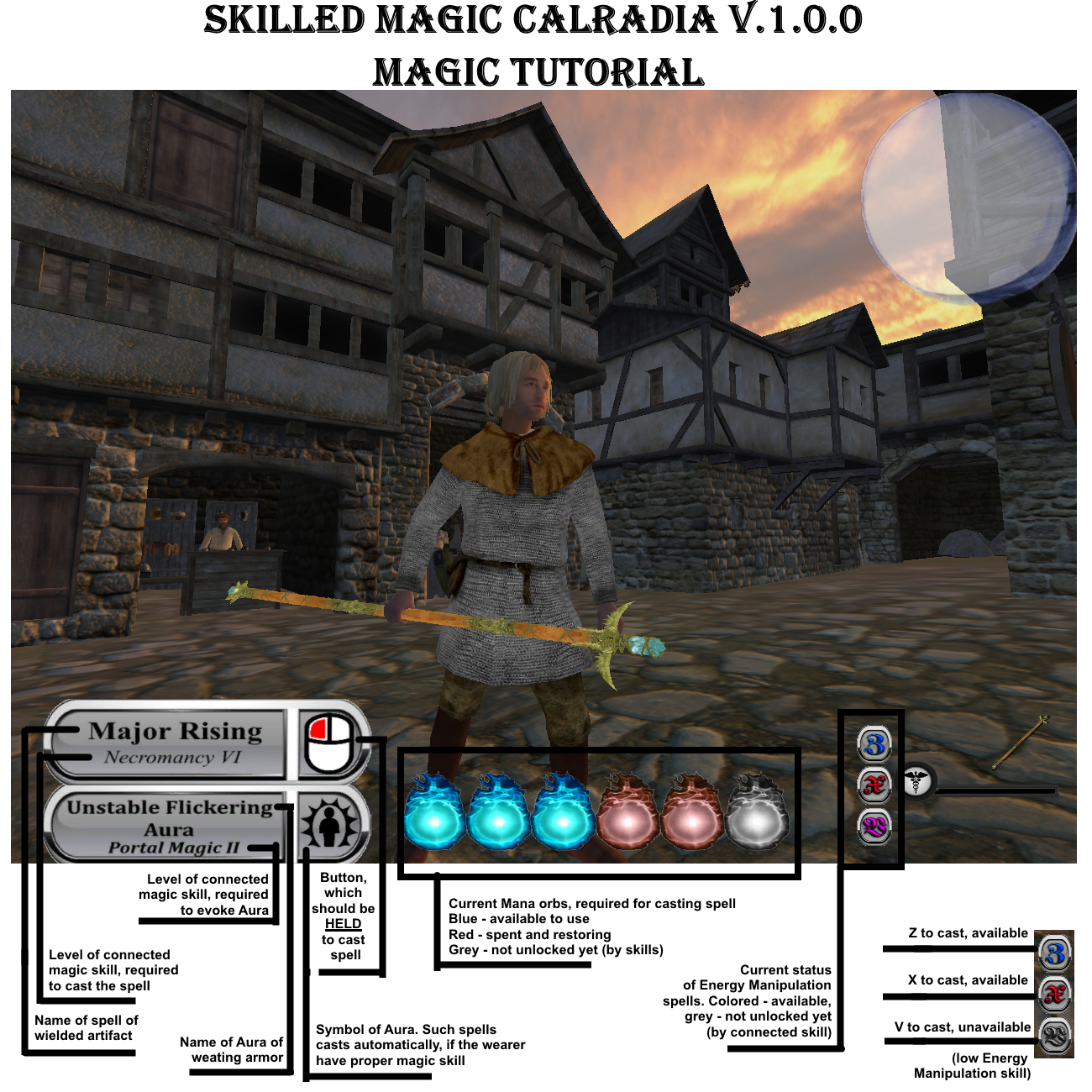 Artefaction is not like magic, but just sending some elemental missiles at distance. It is perfect for medium range shooting badly armored opponents due to very fast firing rate and requires no magic skill except artefaction.

What about other magic schools - you have mana orbs in bottom of the screen. Mana orbs are spending in casting of spells. You need 1 mana orb for 1 spell. Some spells can be cast without wasting mana, as spells of Energy Manipulation can spend other energies and several magic school have limits of free spells, which are refreshing once per minute. You are getting messages in battle for such magic schools. Almost each spell is connected with concrete magic artifact - part of clothes or weapon; without equipped or wielded artifact you can not cast almost any battle spell except Energy Manipulation ones.

To cast every spell, you also need proper level of connected magic school. Name of required magic skill is written in 2 ways - in description of the artifact in the inventory or right in a battle in Spell UI (bottom left corner of the screen) by roman numerals (spell name and its magic school appears in battle when concrete artifact is equipped).

Energy Manipulation magic school's spells can be cast without artifact, based only on current skill level of caster, by spending not only mana, but also health or life of closest non-intelligent sacrificable creature like horse. Type of required energy is connected with concrete spell of this magic school. To know more, you should tune into energies in camp menu.

Spells have fixed parameters due to balance reasons. Parameters are written in the description of the artifact, which allows to cast the spell. Number of summoned creatures, distance of casting, range of effect and any other things for every concrete spell are not changing by magic power of caster so you should seek for more powerful artifacts with gaining magic skill.

As a rule, clothes and armor is enchanted with passive auras. Auras are randomly evoking, if you have proper magic skill, spending no mana orbs. In Spell UI you see button, which should be held to cast active spell. Check for spells goes about every second due to performance reasons.

There are 3 types of mana orbs - blue, red and grey. Blue orbs are your current mana, you can waste them on spells and make them red ones, enabling their restoration. Grey orbs are passive, those which have not unlocked yet. Maximum number of active mana orbs is 6, and you can unlock grey ones by Mana Reservoirs skill, having 1 active orb by default and +1 for each 2 points of Mana Reservoirs. Their restoration speed is increasing with Mana Restoration skill.

RITUAL magic allows you to waste some ingredients and with some chance acquire soldiers, items, artifacts or cast global spells while also gaining EXP. You should buy proper Lab in goods shop for using ritual magic and then explore its screen in menu of every city (or camp - for Global Rituals). Requirements and rewards are written there. Success chance of every ritual magic spell is increasing with knowledge of required magic schools and with proper ritual magic knowledge.

Why does the game description not specify how to use the Mana Shield?

I personally enjoy the idea of this mod and the concept but there's too many bugs that need to be patched. It just doesn't add up and the English translation is so incredibly choppy its hard for me to understand what a lot of the items are and do. And i didn't understand what the apprentice staff did until i messed around and figured it out myself.

can you transform to other creatures? If not you should remove that description in skill description at character page

Any idea for the release date of the next update ?????

v.1.0.2 Final is uploading now. This update contains a lot of changes to Ritual Magic while fixing several bugs. Sadly, mages won't use their staves as melee weapon - it caused problems with casting spells.