The Higarans have defeated the main Vaygr fleet, the rest is retreating. Victory was announced. Sajuuk is rumored everywhere in the galaxy, but now, the real thing has just begun.
The Vaygr have split up, each lord creating a clan for himself, the Vaygr are now in different clans, trying to pirate the freighters in the newly created trade routes. New and old empires rise up, claiming territory in the galaxy, the Higarans name this event "The New World" as the galaxy is totally changing, political wise. One major Vaygr clan, called the Raakj-Veer, is feared troughout the galaxy. The Raakj-Veer are religious Vaygr clan, believing in some sort of ancient empire from the same age of the Progenitors.

The Raakj-Veer leader, Rakuus Veer, was a highly ranked Vaygr officer and a personal friend of Makaan himself, his power was already considered great, now he has to finish what Makaan did not, eliminate the Higarans once and for all. He saw a perfect opportunity to attack the Higarans. The Higarans had heavy losses, their navy has been severly damaged, even Sajuuk is under repairs and there is no one, to defend one of the Higaran's most hard working shipyards.

A minor force was defending it, large swarms of Vaygr strike craft ambushed the small fleet and the battle was not looking good, until a miracle happened.
A very large number of hyperspace signatures came in, unknown ships came from the border and started aiding the Higarans in their battle. The attackers were totally defeated. The Higarans started to wonder who they are, as their recognition codes were vaguely familiar.

They seemed to be military vessels from the Criidaar, the Criidaar were a minor race in the Vaygr invasion when Makaan still had the leadership, the Higarans protected them multiple times, the people were grateful and wanted to help the Higarans in any way they could, but they were not as advanced as the others. They now have come back to repay their debt, large trade routes and technology trading has already begun after the first encounter between the races, the Criidaar are now a major race with a small territory, but a powerful military with newly developed technology equal to the rest, they are now the Higaran's closest allies.

Other empires have also risen up, the new territories have been drawn, new trade routes, new diplomacy, but also new ways of killing and new wars between empires.
The Higarans are still at war with the rest of the Vaygr and the Raakj-Veer, now with the Criidaar on their side, they now stand a larger chance of defeating them.
All empires are shattered across the galaxy, Vaygr pirate clans between them, more has to come.
The Criidaar are funny people alright, they're mostly small, fast talking and funny to speak with, Higarans have no problem talking to them and they are impressed how the Criidaar rose up after being such a minor small little empire on their planet.
Their technology concentrates heavily on kinetic weaponry, as they have no knowledge on ion technology and there is not much known about their type of energy or missile weaponry.

The ships seen in battle are just two of them for now, I've been working hard on the concept and I'm giving the interceptor a makeover, this interceptor is faster, less armored but more heavily armed than the Higaran interceptor.

Progress
I already have some ships in-game, I recently found somebody to help me as well as this community is very helpful if I have any question, I am not working as a train but I hope to get a playable version working as soon as possible, starting with the basic Criidaar vessels and new empire concepts.

Team
I have no real team, except me doing the whole mod and my latest friend who does the UI. I did not plan to have a team, but I'll be happy to have people to work together with me on this mod, like scripters, modellers, concept artists, and hopefully somebody who can fix my story up, English is not my specialization

I'm open for suggestions, I'm starting a moddb page and maybe a forum, too.
Anyone who wants to help is welcome, I'll be working on a playable alpha right away. 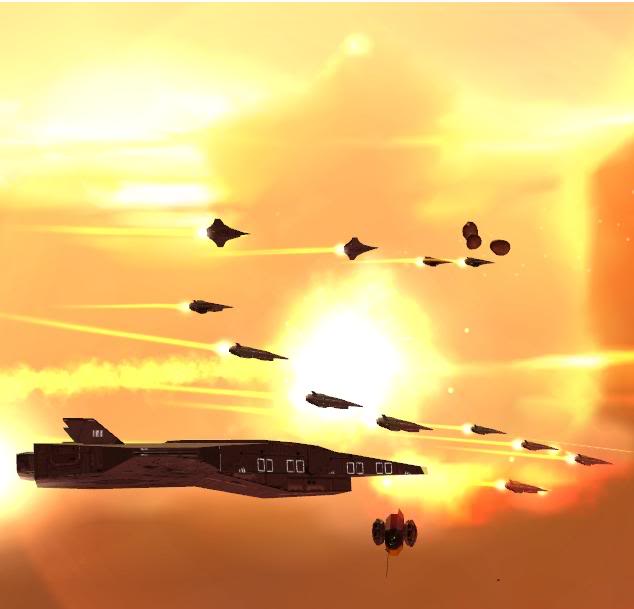 Thanks for voting and helping Homeworld : Shattered on it's quest to become the 2021 Mod of the Year. You are now in with a chance to score some free games from our #modlove collection. Help this mod secure more votes by embedding the widget (or link) we have included below on your favorite sites.

Another good news is that I completed a large weapon frigate like the ion cannon frigate before I decided this, I'm uploading the shots now.

Update - Forums up - Current Status : NOT DEAD! We are doing great!

The Frigate texture is complete, I've had a hard time doing this but this shows I'm working pretty hard on myself here.

Hey nice job getting your mod on ModDB! They wouldn't even take my mod; just the two ships as an addon pack.

Very nice :) you should donate your completed materials to the Homeworld Universe mod

I've started to design a Carrier for the Criidaar and the concept is getting there.
You however, need to polish up on the stories grammar, send it through me and I will edit it.

nice idea man, i like the models so far i see where this is goin =D