Slipstream: The Price of Freedom

“What would happen if we applied Earth 2150 to Homeworld?”

Slipstream: The Price of Freedom is just that. Or, at least, was supposed to be just that. What started as a multiplayer combat simulator, ended as the first entry into the Slipstream universe that never reached its full potential. This epic mod is a semi-total conversion of Homeworld2 Classic, which drastically alters the gameplay, music, and art-style. The mod is not technically finished, as it still uses the stock Homeworld2 models that were supposed to be replaced by actual models during the v3.x series. However, the gameplay is essentially complete save for a few balancing issues.

Slipstream – imagine the year 2631. Humanity has divided into two factions, each with their own cult-like hegemony, bent on absolutely annihilating each other. Each side has been fighting for the better part of a hundred years, locked in the “Freedom war” so orchestrated by the oligarchies and labeled to expedite patriotism and pride. Clearly, this perpetual war will see no end until there is no one left to fight it. The tensions between the two hyperpowers finally give way, as galactic civilization comes crashing down with one last order: “Eradicate the enemy.” Now is your time to stake claim in the new galactic order. Take control of your fleet, and eradicate the enemy.

Experience a chaotic combat simulator that has you thinking twice about strategy. Weapon damage is random. Ships move randomly to avoid weapon fire. These are just a few examples of what you’ll find in The Price of Freedom. This is nothing like Homeworld, this is an extremely fast-paced multiplayer arena that keep the stakes high and takes the gameplay to a whole new level.

The Price of Freedom requires much more computing power than Homeworld2’s base requirements. Also, some graphics cards will have an issue displaying textures at times however, newer cards may not have that problem. 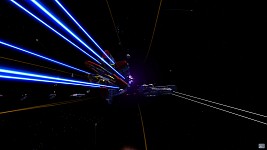 Special Thanks to Axel and Rehash Mod for ship models! Erik Mann and Matt Collins, couldn't have done it without you guys. To the community, thanks for all the great support over the years. Trust me, there's more on the way...

- Tanner Mckenney, Creator of Slipstream: The Price of Freedom

It’s been six years since Slipstream: The Price of Freedom ended full-time development. There has been an attempt at revival several times since then, but nothing has been built past v3.0 which was originally released in 2010. People move on, life gets in the way, things like that. But one thing is for sure, I’ve never forgotten my roots.

Slipstream catapulted my career forward as a software engineer and opened the door to greater success before I finished college. Because of that, I’ve never forgotten the experience attached to it. The community and fanfare surrounding every teaser screenshot and news bulletin was enough to keep the lights on, even as life was starting to get too busy. I’ve always had a love-hate relationship with this mod, but now it’s time to pay due respect to it and explain why.

The Price of Freedom started out as a chapter in the Homeworld universe in the same vein as Homeworld: Cataclysm, which served as inspiration. However, things changed quickly. Our story writer had second thoughts and left with his/her intellectual property, leaving us with a lot of content without context. At the time I was creating a universe to serve as a basis for a much larger, future game franchise called Slipstream. I took full control of the project, and delegated few tasks, leaving a lot of the grunt work to myself. I retooled the original TPOF story as a prequel chapter to what I had been writing, and built an entire universe around it in about three months. The idea was to build out the content we had until we could afford to have original models and content made.

Unfortunately, I had never gotten around to finishing the mod. By the time 2010 came around, there was only Erik, Matt, and I actually contributing to the project. Matt had finally tuned the fighters into usefulness, and Erik seemed happy with the way the game played. At the time, I had to call it quits. I was angry…disappointed that TPOF was unfinished; its quirks and glitches were cringe-worthy to me. So I tried to bury it away.

Fast forward to 2015, I had published v3.0 to Steam and it immediately was well received. It hasn’t ranked too significantly, but it returned impressive numbers for something that hasn’t seen active development in five-to-six years. I don’t want to sound “full of myself”, but when I went to play the mod for the first time in years, I was shocked. It was very well done, very polished and well built. It’s not perfect, but for someone who has worked on professional software since the end of TPOF, I was impressed.

I told myself that once I had some downtime, I would clean up the Moddb page and remove the awful v3.1 that was supposed to be the v3.x revival in 2011. So, here we are. I’ve added some new screenshots and linked a video provided to me by a community member. I’ve also updated the description, and fixed the download link. Lastly, I’ve contacted Moddb support and had the mod un-archived so now it will show on all the relevant pages and search results.

Thank you all for being supportive throughout the years. You’re the reason I keep coming back to this universe. However, there’s one more thing: Myself and a few of my colleagues are looking quite seriously at this mod and we see some potential. Does that mean we’re going to resume development? Not quite. Some of you have noticed that The Price of Freedom is now a mod for Homeworld: Remastered, but without the Slipstream. While there has been some significant development in that area, it is currently on hold while myself and others take a good, long look at the IP and gameplay. Any official announcements will come through this page, but don’t get too excited just yet. We’re still in the planning phase.

If you have v3.1 installed, you can safely remove it and download v3.0 again. V3.1 doesn’t have the polish that v3.0 has, and consider this a “reset” of the mod back to that version. The Steam v3.0 and Moddb v3.0 are slightly different, but I’ll correct this in the next couple of days once I get my tools set back up. Also, if anyone wants to submit fixes or changes to the mod, please feel free to contact me.

Enjoy your stay in the Slipstream universe once again; hopefully there will be more to come!

Hello Moddb! Today we would like to present the final release of Slipstream: The Price of Freedom. We have finally completed this long project...[cont]

Hey all! The v2.9 Beta is available for testing. v3.0 is on the ramp and ready to deploy once the beta clears bug-free! Have a crack at it! Report all...

Hello Moddb! Today we would like to present the release of Slipstream: The Price of Freedom v2.6. We've worked hard on this build to polish what will...

Hello TPOF Fans! I'd like to take the chance to give you the lowdown and the updated TPOF Gear down schedule.

The Price of Freedom 3.1

The Price of Freedom takes place during the many battles of the Freedom war, a 300-year long war between the UNCG (United Nations of Combined Governments...

Slipstream: The Price of Freedom v3.0

Slipstream: The Price of Freedom v3.0 originally released in 2010.

This is the total anthology of the Classic TPOF family. v0.4-2.9 has been package together for your fun. Please read the the readme. Remember, that these...

Slipstream: The Price of Freedom 2.4c

This mod by Sajuuk_CyberX70 takes you to a parallel universe where survivors of a decimated Earth fight for their freedom and convictions. Features reworked...

Hell I love this mod. I play it on classic vs bots, its great. sometimes though my comp CTDs I think it has a memory problem since it does it with the classic game only. do you plan to convert to remastered? Also, while I'm not much of a coder, I can help you out with descriptions and help text. I have an eye for noticing typos lol. it used to **** my teachers off

Glad to hear it! TPOF runs the classic engine really hard. Unfortunately there isn't a whole lot I can do about that. There is a small project I'm working on to get some of the gameplay translated to HWR: Moddb.com but no release yet. I need to make a few changes for the recent HWR updated before I can release a beta.

may run it hard, but it ran smooth on my old XP laptops. Smoother than a lot of the other mods i played. And awesome for that, like i said if you need someone to check for typographical errors I can do that. Once the conversion is done, do you plan to work the story?

Stay tuned. We have other plans. ;)

alright sounds good. PM me if you would like me to be a proofreader.

Don't archive this gem again. The archival system is for mods that ceased development without releasing anything.

Not to worry! I underestimated this mod for what it was; it's not going anywhere, now!

I have a problem with this mod. When im in game everything is white, but i see menus (build,menu,research,fleet) but not ships.

Yeah it's something with the included maps. It never seems to bother my machine no matter where or how I run it, so its hard to debug. Try loading the GitHub version and select a stock map. It will probably work.

I had same bug with warlords(starwars) mod with maps added by mod,so i used vanilla maps and everything was good.

Yeah i'll take a look at it. I remember a while back someone told me it was a blur function that isn't set right. Idk, I only made a few of the maps, the rest are from a guy that hasn't been around in years.

Multiplayer
Tags
Embed Buttons
Link to Slipstream: The Price of Freedom by selecting a button and using the embed code provided more...