Here it is at last, the Homeworld:Remastered version of Homeword:@. What that means is that the mod now benefits from many new engine features and a fancier rendering engine, and is available through download on Steam. It doesn't mean steam will be our only distribution, the mod versions are and will be available on moddb as always. It doesn't mean is that we've revamped *all* our art to be higher fidelity, though in some cases we have and in many cases the new engine makes it look like we might have.

The changeover brings many nice things, large and small. A higher framerate for the underlying simulation means we've been able to make the vaygr assault frigate main gun fire *even more* bullets, the addition of parallel build capabilities at the engine level means we can get much closer to our gameplay design goals, as does the addition of healing beams and latch salvaging. Changes to how races are handled by the engine let us streamline a lot of clunky things in race selection for the mod, too. 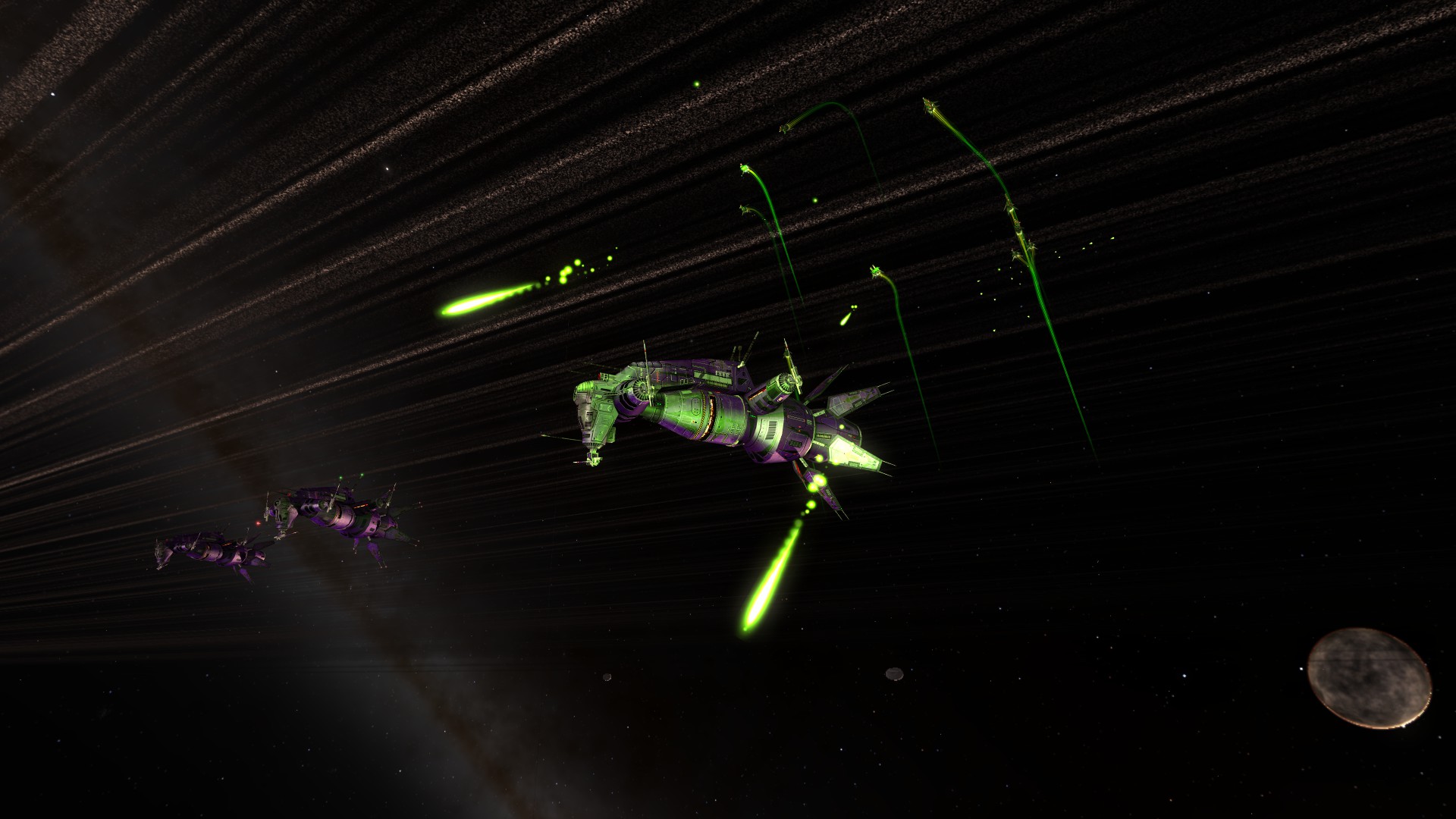 And of course, there's the visual updates.

With the graphical features Remastered makes available, Dark Sentinel has gone back and revised all the Frerrn ships with normal maps and other graphical fanciness. 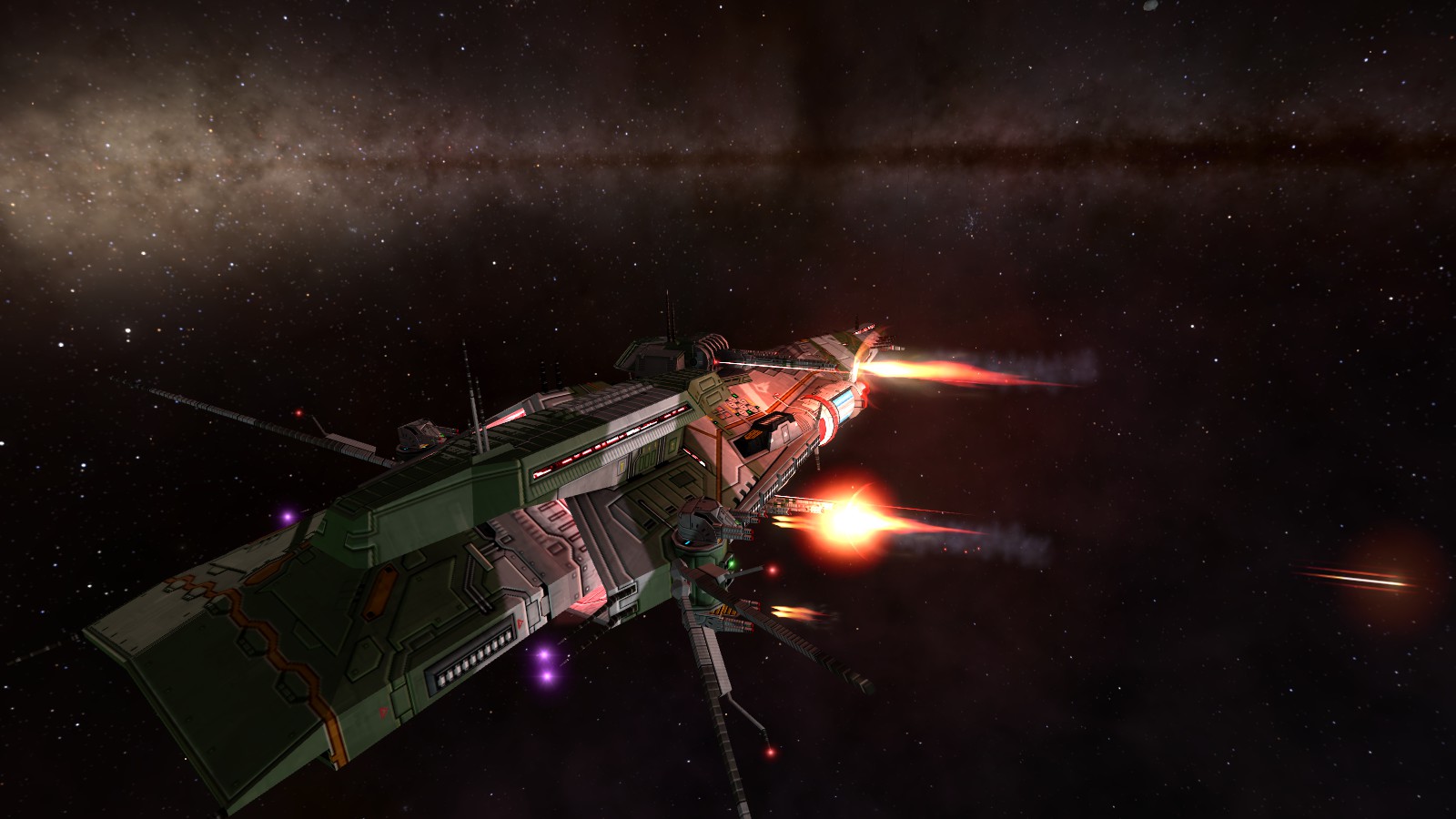 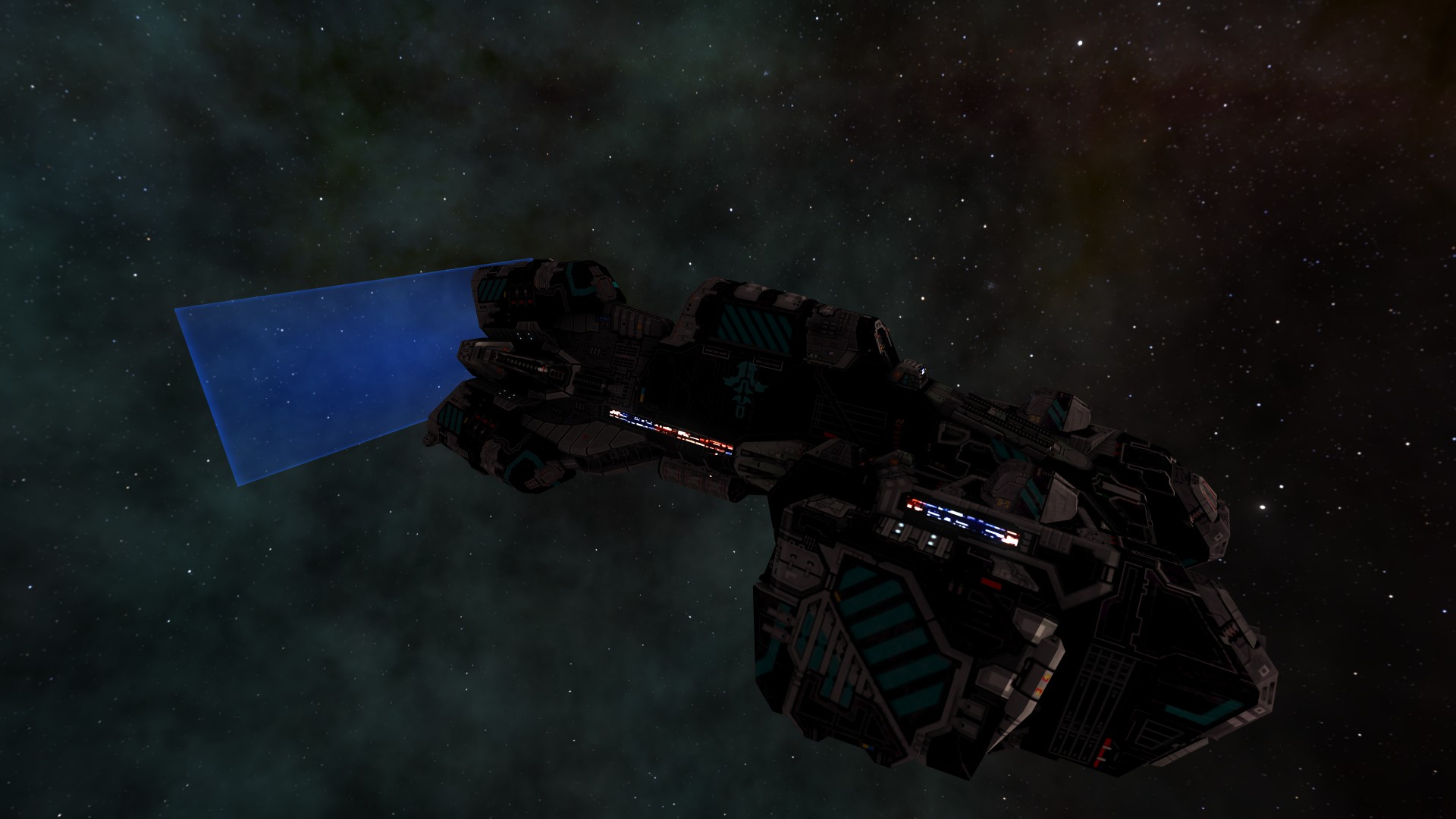 This release also includes our new, Space Engine produced backgrounds. They're a bit of a stylistic shift from standard homeworld backgrounds, so we're interested in hearing how people feel about them. That said, they're unlikely to go away. We need a way to produce new background for our single player plans, and space engine is a huge labor saver there. But if you have detailed feedback on them, we may be able to find ways to act on that feedback while keeping those advantages. 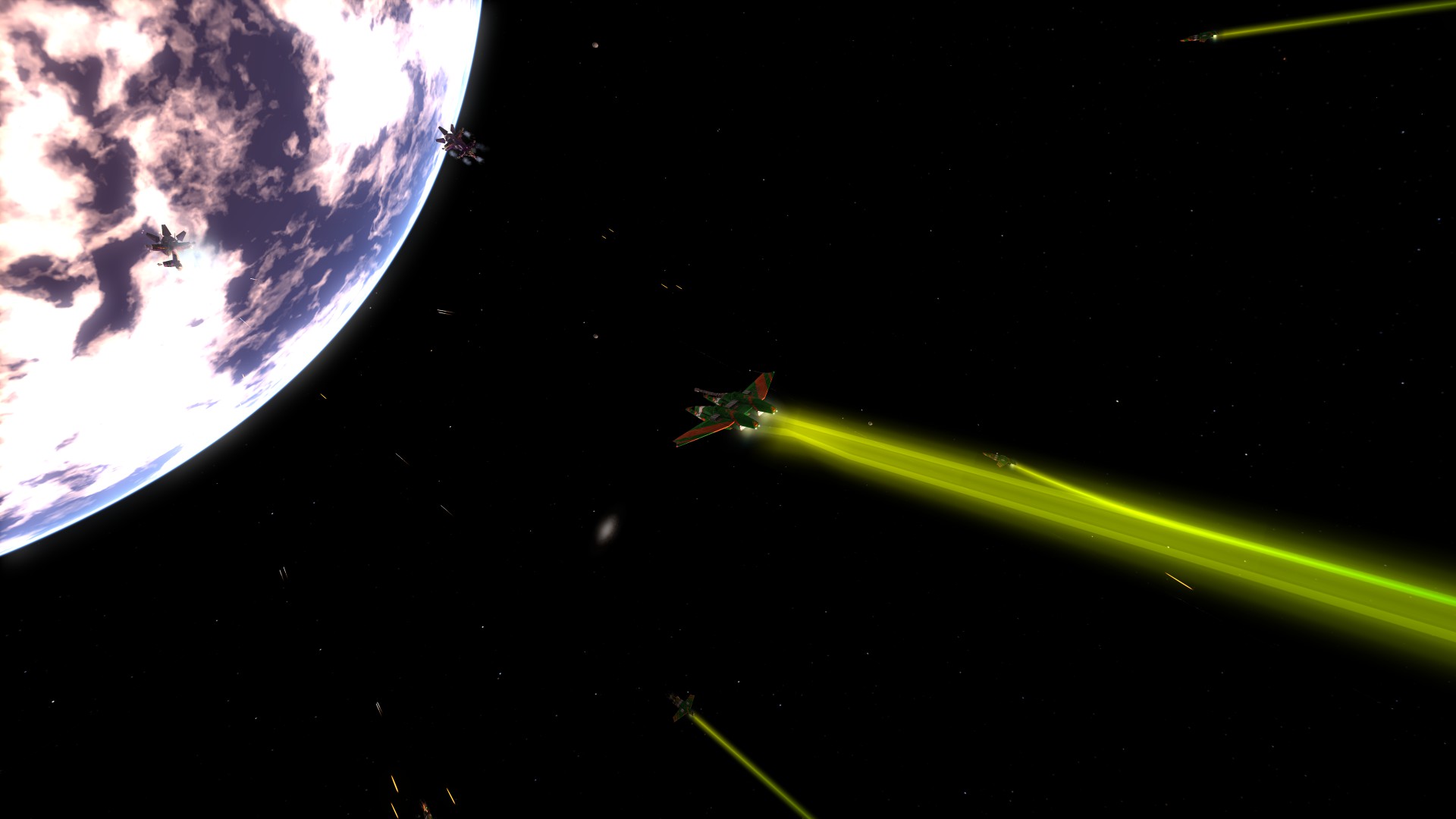 A reminder: We have over 40 fully modeled and textured ships from a variety of contributors. However, new players should be aware that our planned ship lists are large and to fill out the gameplay we've put placeholder models in many roles. These range from untextured rectangles to partially finished actual models. If you're playing the survival mode you have the option of only fighting ships with finished art, though you can still build placeholder ships yourself if you choose to.

The features of remastered and some changes we've made in it's wake have meant a shakeup in how skirmishes play out. Currently we have attempted to balance deathmatches for UNH vs UNH only, the other faction is not tuned well to face up to them. The amount of playtesting we've managed to squeeze in is limited, and none of us are exceptionally proficient PVP homeworld players. We need more games and more players to refine this. If there's interest in the community I'm going to try to organize some community games, timing to be announced on our Steam fangroup. If you're interested in participating and that doesn't work for you, let me know what would and I'll see if I can make it happen. Unfortunately I can't promise any regular times, but if people show interest I'll aim for a session a week, and I'll do my best to take the available times of interested parties into account if they speak up.

And of course if have feedback from skirmishes or PvP games of your own we'd love to hear about it.

It has always been our policy to make our work available for the community to use, both to encourage other projects and to make sure that if we vanish from the net someone else could conceivably at least take over maintenance of the mod. With the changes to modding in Homeworld Remastered simply providing our blessing and files doesn't quite get that done anymore. To that end an asset package has been made available for download too, that provides all the source files HODOR needs to rebuild our HOD files if anyone needs to. If that means nothing to you, don't worry about it, just download the release method of your choice and ignore the assets download.

Adapting to the salvaging and repair mechanic changes has been taxing, and isn't completely finished. Salvaging in the mod in particular is a complete mess and I wouldn't recommend trying to use it. Repair should generally work, using the returned healbeam mechanics. If you have any issues with repair not working, please report them so we can fix them.

There may also be some issues with animation, but those should be rare. If you see any, let us know.

Any day now gearbox will be releasing a new patch that is very exciting, and promises to bring back the formations that didn't make the transition from HW1. I fully expect this to cause a compatibility break, but I also expect to be able to adapt to the new system relatively quickly. I plan to do a update of the current version ASAP after the patch comes out, for pure basic functionality, no waiting on tons of polish or any new content we're working on.

That said, even if it's only a five minute job to update my copy of the mod, packing and uploading the mod can take hours at least, and worse in some cases. I'll get it done as fast as I can, but it won't be instant. Making everything use the new features to their fullest extent and rebalancing our ships to the new systems will take even longer, but will come after.

Past that, we have a few avenues for progress. One is to continue refining multiplayer factions, in particular the Frerrn are ready to get split off into a third faction with minimal added placeholder ships needed for that. From there, the confederate+vaygr fleet needs some work to break it into some kind of parity with the UNH's armed mothership. There's also a fair amount of low-hanging fruit to be had in improving placeholders for those fleets without enough finished art, and of course art production is continuing.

Past all that, the single player mission project we've talked about in the past is not dead, though it will most likely wait on the big patch before being finished up. In the wake of that patch, expansions to or improvements of survival mode may aso become possible. We will have to wait to see what the patch brings.

The remastered mod page for Homeworld @ is now operation

Our Plans for the Future

Homeworld:@ talks about what's going to happen now that Remastered is out.

A bugfix release to actually fix the survival mode crash 0.2.21.1 should have fixed. Please report any crashes you encounter.

A bugfix release to actually fix the survival mode crash 0.2.21.1 should have fixed.

A bugfix release addressing a survival mode crash and accidental omissions from the credits. Moderate changes to the structure and naming of the download...

A bugfix release addressing a survival mode crash and accidental omissions from the credits. Moderate changes to the structure and naming of the download...

Downloaded from GOG.com again to play these awesome mods - looking forward to this!

hi everyone, im new! and i have a question about homeworld 2 or 1 for that matter. see i wana play this game again. had it on an old pc and my new one iv had for a while now is only like a year old. but i can not for thw life of me get this game to run or get past a black screen. its sots for like 2 seconds then it just gose back to my desk top. iv lost the physical game disk it self. so i know some people will be mad but i have tryed getting it off a site that has it for free coz i dont wana pay for it a second time...anyways it just will not work on my windows7. any idias??

look for the German no-cd patch thats the one you want for Win7 - ( the english one won't work on win7 ;)) Don't worry it wont change the language or anything it just runs the game :)) I already went thru the situation you described hope this helps :))

Oh, and you want to update to 1.1 before using that german no cd exe, Have Fun!

Love you guys, keep at it!

Is this mod going to go up on steam workshop?

The Age of the Progenitor Homeworld 2