(!!) This is the archival/HW2 Classic version of the FX:Commander mod.
For the Homeworld:Remastered version (named FX:Galaxy) click here.
---
Latest Version:
FX v2.2.1
---

Homeworld 2: FX - Commander (commonly known as the FXmod) is a modification project for Sierra's Homeworld 2 that aims to "tell the story of HW1 in HW2" while simultaneously improving various aspects of the game itself, both content and graphic-wise, ultimately bringing Homeworld2 to a brand new level. Development is led by 9CCN, a group of Chinese modders that made a name for themselves with their Gundam SEED modification for HW2.

Starting out as "just a mod that ported the HW1 vessels to HW2", the FXmod has seen countless updates, overhauls, exciting new features and changes ever since its first release in 2006. With new units, abilities, textures, maps, fx, player modes, icons, blueprints etc. we have only covered the tip of the iceberg in terms of what is already included in the mod and what is yet to come still. Much of the content in the FXmod cannot be found in any of the other current modifications.

Even with the amount of changes that have been made so far the creators say that the entire FXmod is only halfway done. Many people have already marked this mod as their favourite Homeworld2 modification following the release of v1.72. With over 370k page visits and more than 50.000 downloads, the FXmod is frequently covered in the "Top 100 Mods" list on ModDB and has even received attention from Gearbox. Come and try out the mod that many fans have dubbed as "Homeworld 3" and managed to catch the interest of the company that will be doing the HD remakes of the Homeworld series.

Staying up to Date

We also have a forum page ("Forum" tab in the menu atop of the page) that can be used for:

!! Please do -not- flood the comments with technical issues / bug reports
We have the forum for that. Although it may seem dormant, we actually check do it frequently. 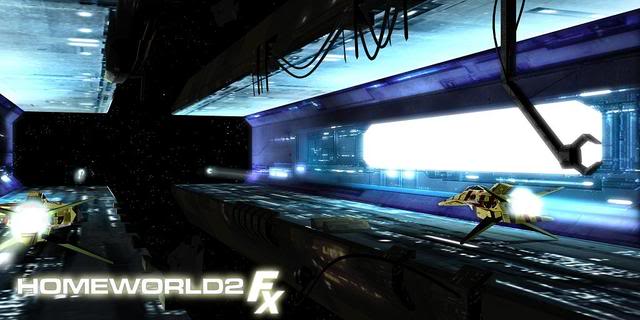 This mod has moved

After 7 years of modding, we will be continuing our project in the Homeworld Remastered edition under a new name - FX:Galaxy.

This page will remain online in case you do not have the remastered edition (yet), but we will no longer be checking or updating it. So, we cannot assist with technical issues.

Thank you for many great years, and we hope to see you in the remaster and on our new page!

Click here to move to our new page on ModDB: Moddb.com

5 years later, FX:Commander lives on in Homeworld Remastered. We are revisiting our roots one last time, and are inviting you to come join us in the present-day...

In the distance, the signs of new year dawn on the horizon.

FXmod Q&A: Your questions answered (#2) + A Message from Gearbox..

On the upcoming releases, our plans for Homeworld:Remastered and an email from Gearbox itself!

Content/graphics update for the 2.x series and last release for HW2 Classic. Comes as a full English version. 'Read more' for more info.

The official English translation for the first two installments in the v2.x series. Patches FX v2.0 & v2.1 to the English version. Installation instructions...

Second instalment in the 2.x series. Installation instructions/changelog below.

This release is a quick release after version 1.87. Unfortunately, as there are no changes listed in the official channels that I can find I have no idea...

This is another release in the v1.8x series, 1.86 makes a lot of balance fixes, adds some new features, new models, new specials effects and more sound...

Hi, I keep getting this error whenever I try to play survival, something about a SCAR Error, game can't find "DEFENSE.LUA"

Excellent mod. However I have a question.

The put a file into the big that unfBig can't read so it fails to decrypt the big. This was to stop people stealing models and effects from their mod.

you cant steal something thats free...but I understand why they locked it.

A lot of people have been stealing models and other features of the FXmod and put that into their own mods without requesting permission or giving credit. 9ccn wants to protect their assets.

The installer won't work for some reason. It keeps saying that the .exe file cannot be found, and then deletes itself upon trying to run.

Is there anyway for me to add ships to the mod?

FX v2.2.1 (English) has been submitted to the Downloads section. It is awaiting approval and should be available shortly.

Please read the information both on the download page for this version and the readme provided in the archive.

could you please upload this mod to steamworkshop for hw2 classic ?
played this mod years ago would love to again.

workshop doesn't support mods that have more than one .big files at present ,That's why havn't uploaded this mod to steamworkshop.

Apparently the guys at ModDB are taking a bit longer than usual with this one. It should be coming through over the next few hours, I hope.

Apologies for the delay.

We have some news for you
Weibo.com