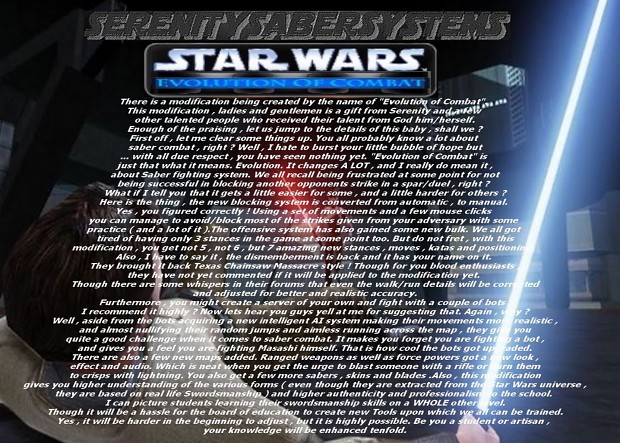 Evolution of combat III
Is a total conversion for singleplayer and multyplayer and requires a fresh copy of Jedi academy installed without any extra models or maps in the base folder.
Jedi academy must be fully patched with the latest update ,Evolution of Combat III requires Jedi Outcast Fully patched and installed into the jedi academy base folder
The patches can be found here
Jediknight3.gamefront.com
Instructions on how to install Evolution of Combat III can be found here
Moddb.com
Your base folder should look like this
Moddb.com
both singleplayer and multyplayer have full manual blocking and both singleplayer have full outcast support (if installed correctly)
If you MUST have extra maps or models installed into your base folder then follow the instructions on how to add them in the tutorial to avoid crashes.
Make a backup of your Jedi academy game and move it to a different location or change the name to jedi academy personal .then re-install a fresh copy, then patch it. then install jedi outcast then patch it then install the outcast files into the academy base as per the tutorial.
Then install Evolution of Combat III and the game will be stable.
This mod is a total conversion built to play using base files only.....

Evolution of Combat has changed radically, the mod focus is now (As the name suggests) on Evolution of Combat.A lot of the unnecessary stuff that was nothing more than a distraction and swayed the focus from combat in EoC I and 2 has been removed.
The saber system has been overhauled ,If you watch the film "crouching tiger,hidden dragon" you will see what we have been aiming for.We have focused our efforts on Defense ,calculated attacks, timing and speed.
The saber system is a serious "Saberists" element of the mod with aspects of the Wudang chuan swordsmanship fighting styles and 7 saber forms to choose from.As a result of this ,the people who just like the hack and slash base jedi academy system will not like this.And if you expect your enemy to just stand and be killed, well i got some more bad news
The bot A.I has been totally rebuilt ,these bots (enemy's) will defend themselves and attack you with a degree of intelligence timing and cunning ,never seen before in JKA .We have aimed at a sense of realism ,to make you feel you are fighting real people.So the message is "If your not an expert at EoC saber system don't play on skill level Jedi master" you will just be killed.
The melee combat system has also been rebuilt ,added moves for defense and attack make melee combat a new skill based element to the mod that ,"when mastered" give you a big advantage over a less experienced fighter.
New weapons and vehicles make the life of a gunner far more interesting.So if you don't want to play as a Jedi, fear not.Many new aspects have been added to make the life of a gunner far more fun.The athlete skill is something gunners will learn to love ,allowing you to jump higher,further, perform acrobatics, and move faster .This skill will make life hard for other gunners and saber wielders to hit you accurately, as you leap and dive around from fire position to cover position.Location based damage means you can blow your opponents head,arms or legs off with a single shot,Making a gun user an enemy respected by all.(Including Jedi).

A full experience and Rank system allows you to save your progress to avoid "starting from the beginning" every time you start a new game. Just log in and as you get better and more skilled at EoCIII you will be rewarded by promotion and skill points allowing you to upgrade your weapons or force powers.
New force powers and updates of the old force powers make the life of a sith or jedi far more interesting .Use the force wisely and be rewarded generously, abuse or over using your force powers can weaken you and make you vulnerable to attack from wise enemy's.

Evolution of Combat III is a new build ,it is not intended to be a mere update of Jedi academy ,but a New beginning.You must relearn what you have learnt, remaster what you have mastered, with patience , experience and intelligence.This mod will take combat of all forms to a new level allowing you to become the greatest warrior in the galaxy.........
May the force be with you.

Evolution of Combat II 2012 Edition is on its way Support for many models is now added including SuperbattleDroid Manual blocking Manual Dodge 48 new...

just put this file in your base folder and start a new game ,remove other animation mods to avoid conflict

After months of testing ive finaly found a way to make Manual blocking possible; The blocking button is the USE key + Any direction key

Return of the JediMaster patch

Return of the JediMaster patch Fixes the last of the known Singleplayer bugs (The ones i know of anyway). This will be the last update to singleplayer...

Yavin_trial crash fix. Fixes the crash when you collect a saber after completing the jedi trials on yavin. Also some single player sabersystem fixes Also...

Further Development for this mod can be found here.
Moddb.com

How do you aquire new force powers as well as upgrade existing ones in singleplayer? There are no end-of-mission screens where I can do that, And so im in the mid game having no force powers outside of the ones I got at the Jedi Temple. Does anyone know what to do?

Ey, it says the OpenAl32.dll is missing, any solutions?..

Can someone help me? I have installed this game and now when I log into online the character moves in a weird way like if he´s frontfliping. I just want to know how to unnistall the mod, i have tried to delete the files but there was no effect.

Further development of the SerenityJediEngine can be viewed here

You need to buy force sense first, to become sensitive to the force. Only then can you buy a lightsaber defence or offense power.

What is the big god damn deal!?

One of the greatest JKA's Total conversions! But you know, it is based mostly on the multiplayer while i prefere to play SP like many other people. I wish SP part of the mod will be finally improved. Nethertheless it is a real 10!