The Mod Launcher is a tool that allows users to install and run Fallout Tactics mods, customize their game play experience and make modding Fallout Tactics a little easier.

The Mod Launcher was originally designed to be a platform for modders, it was made to help you create your own Fallout Tactics mods!

It makes sharing your mods easier too! By creating slave core folders that are easy to upload and are completely separate from the Fallout Tactics core folder so there is zero unnecessary files uploaded, just modded content.

I hope you enjoy my program and the modded content provided by the Fallout Tactics modding community!! :)

How to use - (Important)

After the mods are installed open the Mod Launcher and click Load Plugins:

All of your mods and plugins should be shown on the screen like so: 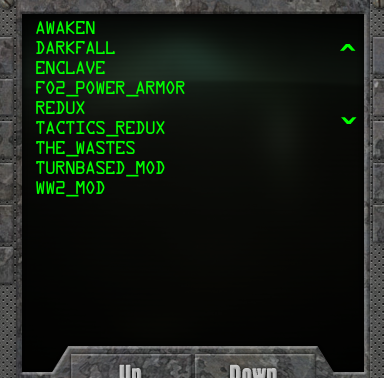 Now that your plugins are loaded you still need to select those you want to use, you can select them by left clicking the plugin(s) you want to play, they should be underlined when selected as shown in the image below: 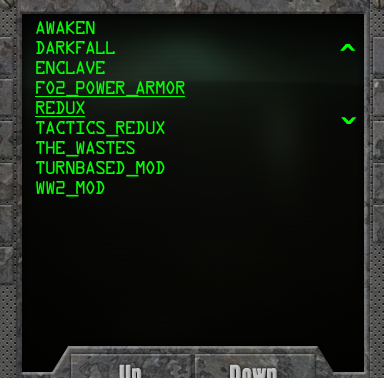 Select the mod or plugin you want to move by right clicking on it, it should turn Red like so: 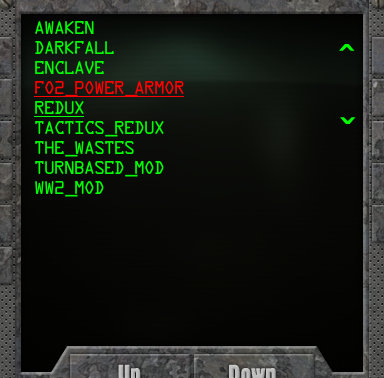 Use the up and down buttons to move the selected mod/plugin. Any mod/plugin that requires a specific load order will tell you where it needs to be:

If you have a lot of plugins you can use these buttons to move the list of plugins up or down to view all of them on the screen:

Click Start to launch the selected mods/plugins, or click Start "without any mods selected" to launch Fallout Tactics:

Also this works with both game editors, select the mod you want to edit and click one of the editors below:

FT Tools 2 and the other editors are only in the Tools Patch.
You can find it here:

The rest of the buttons you can explore. :)

If you need any help let me know via Email: robco.db@gmail.com

Shows a list of changes to the Launcher between versions.

Shows a list of known bugs and problems with the Mod Launcher.

How to make your own plugin

Shows you how to easily make your own plugin for your own mods or for mods not yet available in the files section.

This is the official Enclave install tutorial!!! It's finally here! It may look really hard and complex to install just by a glimpse but trust me it's...

The Mod Launcher itself, please read the instructions in the tutorials tab before use if you haven't already!

The Sum + Nous Aurons (fr/en) 1.6 Alpha standalone version. No installation required. Place in "c:\TheSum" and launch one of the two shortcuts.

The Sum + Nous Aurons (fr/en) 1.5.6 Alpha standalone version. No installation required. Place in "c:\TheSum" and launch one of the two shortcuts.

Page is getting updates! Making this tool usable once again till the Mod Manager is in a position to exceed the Mod Launcher. :)

Use our new Mod Manager please and thank you. :)
Moddb.com

Robert, I think I might be as blind as a mutant mole-bat, I can't find the 2.3.2 Version of the Mod Launcher!

I think Robert said on NMA that there was an error with the 2.3.2 version, so he took it down real quick to fix it :o Last I heard, he was already putting back up a fixed version of the new update

The files are up now.

Awesome! Time to check it all out :D

I keep getting this error saying there's no BOS.exe in the FT directory.

Please email me for the fix. (Can't post it here)
robco.db@gmail.com