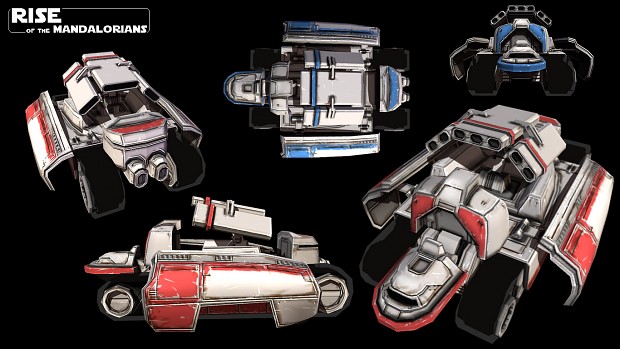 That...is an absolutely *interesting* description of the old MPTL. Will be nice to not have to manage a second nearly useless unit in addition to the MPTL.

Also, I dunno. Those smooth-racing tire-style treads must be nice. +10% bonus to speed on racing tracks all over the galaxy?

Does the cabin lower when it's deployed?

This is not making the wait any easier, by the way. It'll be fun to actually be able to use all of these new and improved units you've been showing off.

Oh, the smooth treads offer little to no traction; great for doing donuts on the Emperor's starport landing pad just to **** him off.

The cabin will lower. Basically, the missile tubes fold in on each other (so they are stacked), the doors fold up as they did, and the cabin raises and tucks into that little pyramid-shaped inlet on the chassis.

Actually the treads look very Sci-Fi-esque this way. Like some kind of fancy liquid metal stuff. Doesn't fit Star Wars, but definately got something going for it :D

Like you, I also think of the spotter droid as a near useless unit, particularly when their ability could have so easily been incorporated in with the artillery, and I wholly agree with your thoughts on the "artillery" aspect of the unit.

I look forward to using your preferred unit, and hope to see a patch with it included released soon.

God this unit was the bane of my existence in vanilla it always punished me for spamming stormtroopers.

In my experience, it punished the player for not noticing it until it's too late to save your troops/vehicles/buildings.

I hated it. They seemed to be everywhere at once and stormtroopers can't escape worth a damn.

that's the thing though, this damn thing was spammed by the ai and killed every thing you put out as the imperials before you could even see the thing. But the second you decided to play as the rebels, this "artillery unit" would never shoot at ANYTHING!!! it kept trying to run over infantry!

It liked to shoot at speeder bikes, I think. And, occasionally, enemy buildings.

Agree. The AI spammed this unit and it's range, combined with it's sheer destructive power, made it horribly annoying. Then, when YOU try to use it, the AI gets all derpy and it can't hit it's mark for beans. I'm attempting to address all of those issues in the next release.

Those things turned almost any advance into a slaughterhouse for even my armored divisions of at at's they would sit behind a mountain and shoot me while I couldn't shoot back. Thats why I always used bombing runs and bombardment on Heavy factories and arty. Way better than Empire Artillery.

well the spotter had a rather important role. if you destroyed it, the MPTL couldn´t use its main potential - range. I know it´s not realistic (like manymanymanymanymanymanymany other things in SW universe) but...balance :/
even though maybe I never used it this way...

Exactly. Other units can be used for spotting...units that also had offensive abilities. The spotter droid was a waste.

"These new vehicles will not deploy with a spotter droid. Why do that when Star Wars would clearly have the technology to place the “ping” ability on the artillery itself? So that’s what I’ve done." Brilliant. Little joy thing.
One question: is AI able to use ping?

AI never has used 'ping' because the AI can "see" the entire map anyway. The way EaW AI works is that it accumulates resources, and then sends it's units to targets, based on need (reinforce point, build pad, enemy base) and it already knows were all those targets are, hence...no need to reveal any portion of the map. In all respects, the EaW AI is actually very simplistic.

Definitely a huge improvement over the old MPTL model.

Thanks for the feedback everyone!

nothing says down with the empire more than one of these at the front lines or back lines if you have the common sense to put your arty at the rear of your force.......i sometimes forget to move them to the back

This redesign is incredibly better than the old ugly one. Can't wait to use it! Will it be able to run people over? That was always kinda fun to do.

Might even convince me to play those rebel scum from time to time. ;)

I'm slowly starting to anticipate this for more than getting to your Halo mod. Slowly but surely. I love the work, keep up on the details :3

Convert! The power of Star Wars compels you! Lol.

first off this was my most hated thing to see in land maps. why? because it hit such a large target area. was like a mini bombing run

The YVaW guys had the same idea. It makes sense that the republic would take the time to build an actual artillery piece over using their old school buses of death.

I will be honest, I HATED the design of the MPTL in vanilla Empire at War. It looked more like an Adepta Sororitas Exorcist Tank….except not even half as cool, powerful, armored, or associated with an entire legion of sexy, badass women of war. In other words, it was a rolling tube of toothpaste that opens up to reveal a rocket-shooting hair comb.
I digress.
The basic functionality is the same except that these new vehicles will not deploy with a spotter droid. Why do that when Star Wars would clearly have the technology to place the “ping” ability on the artillery itself? So that’s what I’ve done.
Further, the proton torps that it shoots will be faster and less…lazy. The current ones shoot in zig-zag patterns and slowly wind their way to a little spot in the dirt. It didn’t feel like artillery. That has been changed.
Anyway, I hope the new design is worthy of this mod I’m creating. Just ignore the treads for now…I haven’t applied texture to them yet.